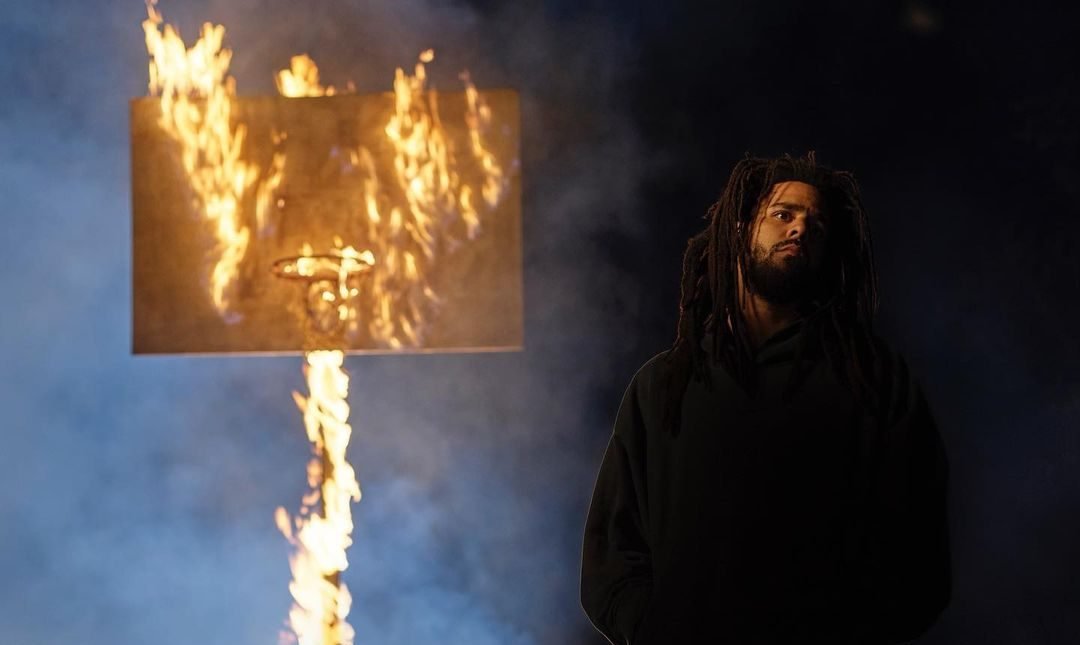 At slightly after midnight last night, I pressed play on J. Cole’s sixth studio album The Off-Season. I have been an avid Cole listener since I first heard his early single “Lights Please” in 2009, then became even more engrossed in all his album compositions when he released what many consider his opus 2014 Forest Hills Drive in December 2014. That said, my honest feeling post a single listen to this fresh project was one of dissatisfaction. I thought maybe Cole had entered a space that felt outside what had previously moved me about his work. Next, I did my usual Thursday evening ritual and listened to all the other releases I had anticipated. Then I was at a crossroads of whether to go back in for a second listen or give into my sleepiness and try again in the morning. I couldn’t help myself and chose the first option and what resulted was surprising. My ears felt as if they had adjusted for the second intake and I heard the album anew and alongside something that felt like an epiphany.

What clicked in my ears and mind made me jump back to what I and so many others gravitated towards about Cole’s 2014 expression. On 2014 Forest Hills Drive, Cole had an epiphany of his own. He realized that all he was chasing in success for his rap career was not at the end of the day what centered him. His family, soon-to-be wife, and home (metaphorical and literal) that existed without it all was his true nirvana. On his final track and conclusion from that album he raps, “I mean this shit sincerely / and that’s a n***a who was once in your shoes / living with nothin’ to lose / I hope one day you hear me / Always gon’ be a bigger house somewhere / but n***a feel me / long as the people in that motherfucker love you dearly.”

This expression was as much internal and organic as it was communal. Cole’s perspective after gaining career success provided many fans (including myself) solace and resulted in still his most successful body of work statistically.

On the following project 4 Your Eyez Only, which was met with mixed critical reception, Cole intertwined his story with that of a childhood peer and friend who eventually lost his life to street violence. He eventually merged the two stories on the album’s outro with astute craftsmanship. The album fully engaged me in the moment and has aged even better for myself and others. Though it wasn’t as singularly internal it was still communal and felt birthed from a necessary life understanding.

Then the follow-up to this was KOD (standing for Kids on Drugs, King Overdosed, and Kill Our Demons). Cole, for this project, interspersed his personal efforts to heal his childhood trauma with his analysis of modern coping mechanisms, ie. the internet, money, and drugs. I still felt especially drawn to what felt communal about this album like how Cole weaved in his pathway with others he examined. It did feel like many naysayers to this project felt he teetered over the edge towards more unsolicited advice rather than communicating what worked for him as an open offering. I overwhelmingly felt the latter and deeply connected with the album, especially for moments where he would presently question his own messaging. Cole had kept my attention and faith.

As I heard The Off-Season for the first time, my processing of it felt overwhelmed by a throughline of arrogance and braggadocio. Cole for the majority of the album felt like he was burying his intention of us all growing and learning together. Instead, he seemed to be focusing much of his energy on shutting down critics and flexing his elevation on others who haven’t “reached their potential” as he has. When I listened a second time, however, the human layers of Cole emerged from within the construct. It was like my ear had to adjust to his demeanor to truly take in what he had to offer in his truthful existence.

On both listens, to be fair, I was here for the initial flex of the opener “95 South,” but doubling on that sentiment to follow was what had previously lost me. For my second listen, there was a line on the second track “amari” that this time hooked my ear differently. Cole raps, “Made it out it gotta mean something,” poignantly to end each hook. On the first listen, I had heard a track riddled with self-importance, which had made me hear that line as background noise. Now it had become the core of the expression. Cole for the overall track reminisces on his warpath to get to a space of wealth and privilege like being, “At the Garden sittin’ half-court.” However, that repeated chorus line marked the beginning of a self-convincing tactic it seemed he needed to get through the bragging. I was tapped in differently.

All of a sudden, for the next four tracks, where previously certain lines had jumped out, different ones emerged at the forefront. For “my life” before it was “Spiralin’ up, just like a rich n***a staircase / No-fly zone, please stay the fuck out my airspace,” but now it was, “My family tree got a history of users that struggle with demons not really the hustler instincts / Therefore, often, my pockets was empty / so while some of my partners was servin’ up rocks on the corners, the project assemblies / me, I was startin’ to envy / wanna be on the top where it’s plenty.”

For “punchin’ the clock,” I first zoned in on, “I got more cribs than Habitat for Humanity,” while now I gravitated towards, “Teeterin’ between enlightened and insanity / Now that I’m rich, I feel nobody understandin’ me.” Cole seemed like he was balancing a seesaw deciding whether to lean on embracing ego for self-esteem or trying to go back and find those 2014 listeners who may have drifted.

When this section came to its thesis, with now my favorite track of the album “pride is the devil,” it all started to make sense. Cole’s ringing post-chorus lyrics sit at the core of the project’s message as he raps, “Terrified, paranoid, I’ll put you over everything to fill the void / And when you’re gone, will I have anything or will I be destroyed?” I had the epiphany with him and was brought back to the communal joy I seek from a J. Cole album. At the root of it all, he needed to get that all out of his system because he was scared. Cole sunk his teeth into a superiority complex to numb the fear of losing us as he became more separated. If he didn’t do this first, he couldn’t have come to the catharsis that he himself was giving into harmful temptation. It felt like Cole brought the therapy session where he says all the fucked up thoughts in a safe space directly to the listener. He made me feel distant until I realized I was potentially closer than I’d ever been.

On the heels of this, I got to more clearly hear his religion and fatherhood grappling on “let go my hand.” Then I got to more fully take in his paranoia-filled nightmare on “close.” On the final track, “hunger on hills,” I lingered with one of the final lyrics anew, “The money might fade, but respect don’t / Still gon’ be me when success gone,” and went to sleep knowing I’d found something.

In reality, I’m farther from Cole than I and the rest of us have ever been, but he knows it. To close the gap he had to put a lot of uncomfortable and potentially side-eye-inducing cards on the table. But by doing so we can still learn some things with him. An album that first felt like a barrage of flex ended up being as composed a piece as any before it. It will never be 2014 Forest Hills Drive again or even 4 Your Eyez Only or KOD again. That said, Cole’s world, it seems, will always be sonically searching for ours.