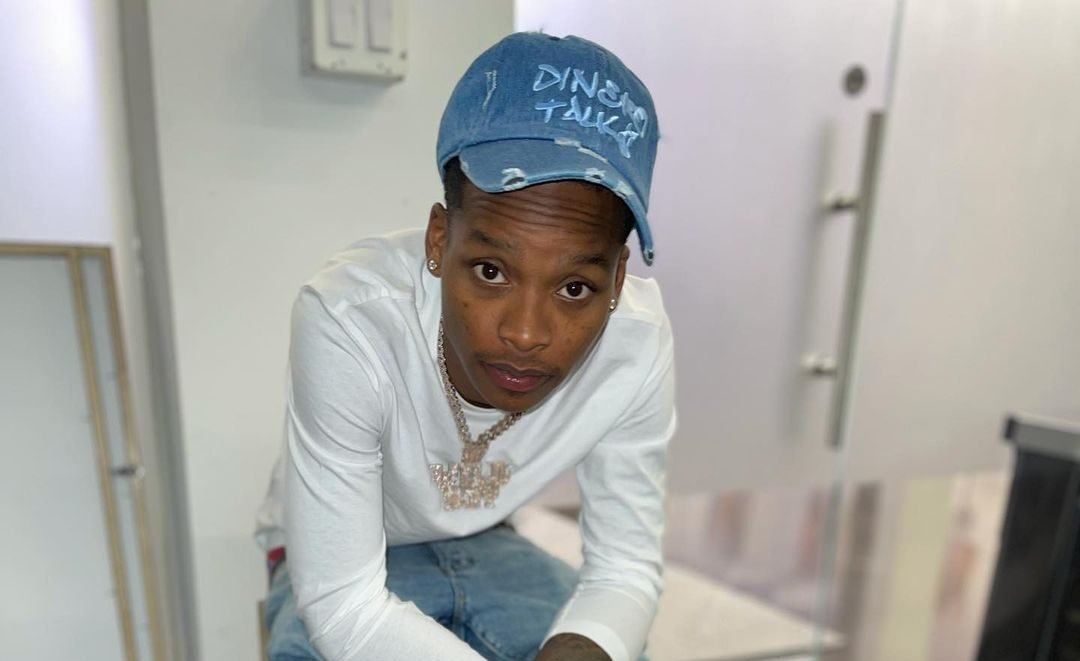 From a Miseducated Reality to Calboy’s Own Universe

Towards the end of our Zoom call when we virtually changed location from car to home, Chicago-bred 22-year-old rapper Calboy showed me a few of his pet lizards. When he showed me the first one, I asked if it was an iguana and he chuckled and said no. He then said the name of a lizard I didn’t recognize, which I later looked up and found to be a Tegu. Next, he showed me his actual iguana, as well as his Savannah Monitor, all in their side-by-side individual reptile terrariums.

Calboy stopped with the lizard tour there but claimed he had many more animals. He has created a pet jungle of sorts in his new home he’s been able to afford off his music — a world crafted from a fantasy he may have concocted in his head when he was growing up in a very different environment in Chicago. That environment and experience is what he has channeled and processed throughout his musical catalog thus far. The reptile haven is an escapist outlet resulting from Calboy being able to emotionally analyze his prior circumstance in his songs.

“When I make music, it’s like writing in my diary,” he says. “I don’t have an actual diary, we don’t do that, we make music. It’s the same as somebody that writes poems or you know just write down what they feel. That’s what I do in the music ‘cuz it’s definitely tough. I’ve experienced a lot. The best way to cope for me is just record and rap about it.”

That sonic coping mechanism of diving into his prior reality landed Calboy a hit single in “Envy Me” in 2018, which led to an XXL Freshman Cover placement, a successful debut album, and most recently a Lauryn Hill-inspired single featuring one of his rap idols, Lil Wayne. “Miseducation” tackles repeated themes in Calboy’s music of loss and grief.

“I lost a friend during the time I created the song,” he says. “Another friend got locked up for a very very long time. We was just goin’ through tough times and I felt like all of it was due to us being so in a rush to get something and not knowing how to get it the proper way. That’s being miseducated.”

The theme of loss on a track like “Lost Ones,” on The Miseducation of Lauryn Hill, the singer’s monumental album, fully aligns with the sentiment of Calboy’s overall and singular expression. “We checked out The Miseducation of Lauryn Hill and I’m talking to my brother D Love,” Calboy says about the song’s inspiration. “We thought about everything that had to do with that project. I didn’t wanna put it out there super heavy, so I just listened to what the dialogue was about and then spinned off that. I knew that was the vibes so I touched on that ‘cuz I was also goin’ through that. It was the perfect body of work to reference.”

The final touch to the track, as mentioned before, was the feature verse from Weezy. While Calboy recognizes the significance of the look, he talked about how it all went down organically. “It wasn’t an intentional thing. It was more we just built a relationship,” he says. “Wayne reached out. We chopped it up and exchanged numbers. He was goin’ through the legal situation before the Trump pardon. I was just sendin’ him prayers and keepin’ his energy high. I know what that feels like. He just respected that and we grew from there. Then I asked him for a verse and he was like, ‘Man send it to me.’ He sent the song back in like an hour and it was done.”

The feature verse wasn’t just a quick throwaway, though. Wayne tapped into the Lauryn Hill concept entirely and weaved references throughout his verse in his own way with lines like, “I’ll knock your top off, son / Ready or not, here I come.” Calboy says about it, “That was the dopest part to me. To actually listen and pick up on what I was doin’ was fire. He told me before he sent the verse back, ‘Bro, this is absolutely crazy.’ I still got the text messages and screenshotted them. I’ll probably keep that forever.”

The “Miseducation” that both Wayne and Calboy connect about on the song has to do with an innately rushed timeline of growth to manhood they both grew up within and around. “Everybody from Chicago gon’ tell you, ‘I had to turn into a grown man fast. I had to jump off the porch early,’” Calboy says. “Livin’ in conditions like that, when you get up in that age about 13, 14, and you super aware of what’s goin’ on. You like, ‘Damn I gotta go get some for my family,’ and you gotta get it right now. Havin’ to get it right now and not knowin’ the proper way might get you in jail for a long time, might leave a homie dead. You so in a rush you gon’ do anything for that paper cuz you’re family need it. You might end up takin’ from another family or makin’ a mistake that take you from yours.”

On his pandemic-released project Long Live the Kings, Calboy used the unfortunate results of this forced rapid growth to inspire a commemoration of the losses of his friends. The cover art for the project shows his friends’ names on animated tombstones with an animated version of himself with a Basquiat-esque crown surrounded by pink flames and purple mountains. The clear metaphor of him coming out of the fire along with the memorialization in the title shows Calboy used this project to process his feelings and heal. “I just put together something to cope,” he says. “It wasn’t so deep like me preparing for the album so I wasn’t trippin’ off whether the fans received it or not. It was a piece of work for me personally.”

While his music thus far has been a way to attack his inner demons directly and therapeutically, Calboy creates his own worlds in other ways to break from his trauma entirely (ie., his lizard jungle). In his spare time, Calboy also creates visual art of separate universes through his own painting. “The painting is more my fantasies,” he explains. “That’s where the real creative Calboy comes from. When it comes to painting and sketching, you can make things that don’t exist. You can create realities of things that’s not reality. One of my latest paintings I did I got Mother Nature in the clouds and she’s crying, then I got a couple walkin’ up a trail, but they’re holdin’ an umbrella. They don’t see her, they just feel it’s raining outside. It’s the explanation of where rain comes from in my own imagination.” Calboy also wants to incorporate the painting into his own Marvel and Disney-inspired graphic novel he aims to complete by the end of the year.

The two-pronged approach to dealing with his past in the present seems to be working exceptionally well for Calboy. However, dealing with the present in the present has proven to be a bit more difficult. Calboy’s upcoming second official album he described for me is titled Redemption. “On a personal level it’s some individuals that pray on my downfall and I know this,” he exclaims about the stimulus to create the album.

“I’m on a road to redemption, so I’m in the process of cleaning up, fixing things, removing people out my life, leveling up, and becoming a megastar.” Calboy is setting himself up for his “Mo Money Mo Problems” by The Notorious B.I.G. moment in album form. On the already-released single “Where Were You,” he talks about how, “Gaining success and coming from poverty, and having friends that are still in poverty… keeping the balance is tough.” He continues by saying. “Everybody can’t go for the ride, but you wanna take care of everybody. But you still got some individuals that feel entitled to what you got goin’ on. That’s definitely what that song was about.”

The road to redemption on Redemption will catalog Calboy’s tribulations, but also consciously show the light in the future ahead of him. “The project is different scenarios where someone was prayin’ on my downfall and I made it through,” he further explains. “I’m celebrating that I made it through. Or I cleaned up my evil acts from the past. The album is a lot of ‘we made it, and we overcame.’”

When I ask about producers and features besides Wayne, he shares, “Ronny J, Jetsonmade, and Go Grizzly are on there. On the feature side, we got artists like Lil Uzi Vert and Swae Lee. I don’t wanna spill too many others just yet, but they’re up there. I’m up there with the big dogs and never comin’ down.”

Another exciting collaboration from Calboy’s career was with the late Pop Smoke on his posthumous album cut “Diana.” This was another odd scenario in the moment, as his feature verse was initially left off the album then re-added on the deluxe. Calboy had to handle an odd communication breakdown with his grief simultaneously. “That situation angered me for like 10 minutes, then I was cool afterwards,” he explains. “I saw the track list and the song was featuring King Combs. Then I’m like that’s cool, but I don’t see Calboy. When we recorded that song it was just me and Pop. He told me he was gonna put King Combs on the song, but I didn’t hear it. Originally my verse was on the song, and I know my boy wanted me to be on it cuz he had asked me to be on the song. I felt some type of way cuz he had passed away, and I already felt a type of way about that, cuz that’s tough. Then I saw that and tweeted cuz I felt some type of way, but then I thought maybe his camp was having some type of confusion or mix up. So I had my management team reach out to their management team. It was a mix-up from the studio we recorded in at Quad. There was a lot of confusion with that. But he wasn’t here to speak about it, so that’s where the confusion really came from.”

For someone like Calboy to have to deal with a conundrum like that, which then couples his sadness for Pop Smoke’s passing with all the other friends he’s lost, must’ve been a whirlwind. He has created all of these outlets for himself to maneuver all of the recurring struggles life throws his way. However, an occurrence like that situation, which combined paranoia and sadness, could make it so rapping about it or creating his own world to numb the real one wouldn’t work as well. Luckily, other people created a universe that he’s used as a place of solace since his youth when his own efforts aren’t enough, the world of the video game Mortal Kombat.

“Man, I grew up off that game. I watched the evolution of that game,” he says. “I had a Sega Genesis, a Nintendo 64, and a PlayStation 2, all with Mortal Kombat on it. I gravitated towards it ‘cuz I was good. I’m not good at all video games, but I’m good at that one. Every time a new one came out I jumped on it right away. I looked into all the backstories of the characters and the storyline. That’s another thing about creatin’ a universe. They created one and it’s real dope.”

Whether it’s music, lizards, painting, or clicking buttons in a fictional Earthrealm, Calboy has concocted an arsenal of tactics for survival. The road to redemption with them seems conquerable.