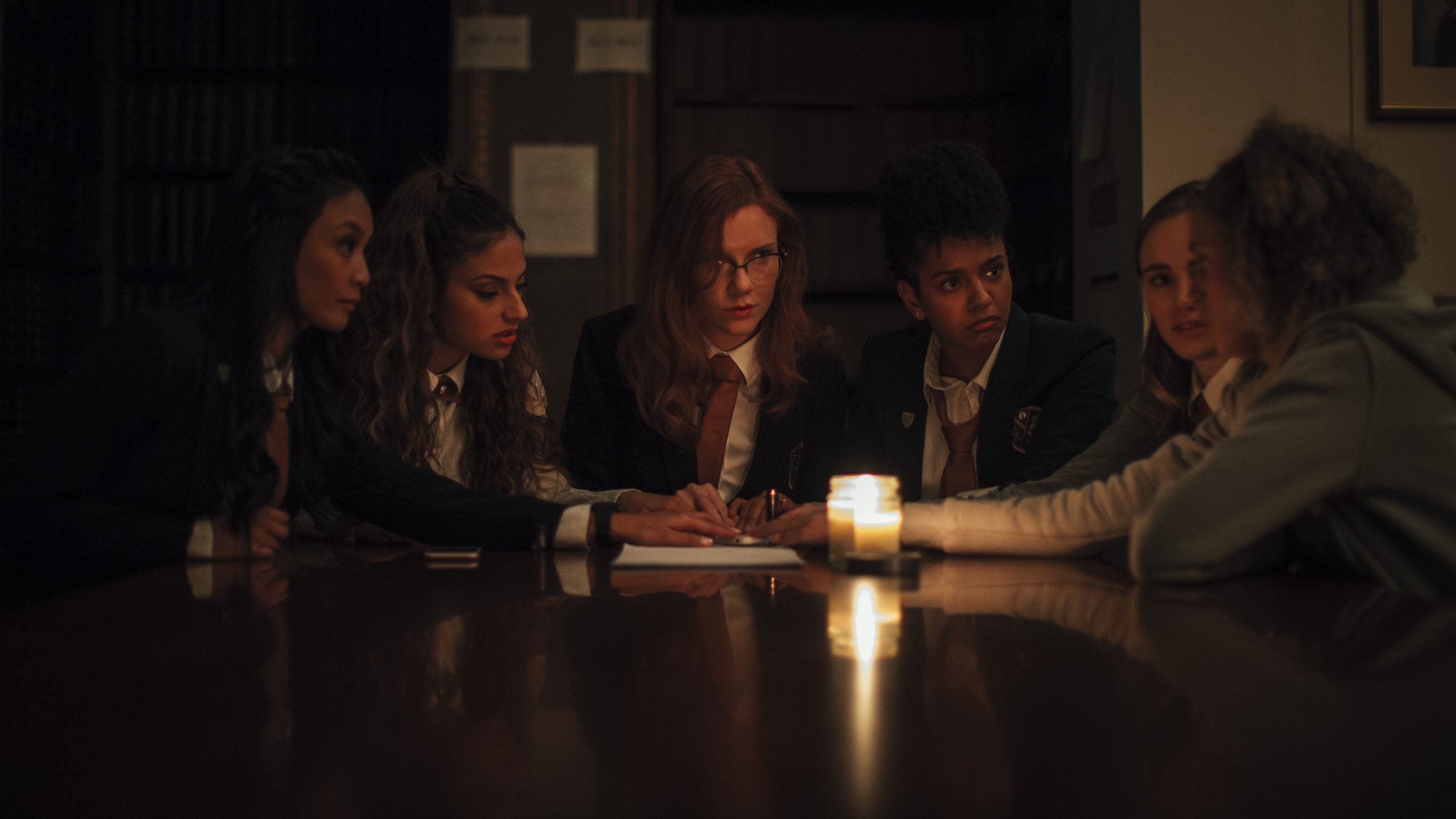 This isn’t a two-man game anymore; Simon Barrett is stepping out into the horror world on his own. The oft-collaborator of Godzilla Vs. Kong director Adam Wingard (who was making killer thrillers before pitting two classic monsters against one another) makes his directorial debut with Seance with the ever-stunning, always interesting-to-watch Suki Waterhouse as his leading lady. Spoiler alert: She does a damn good job.

The story follows Waterhouse’s Camille, a hardened and secretly damaged teen who joins the ranks as a transfer student at the prestigious Fairfield Academy. At the boarding school, she meets a group of girls who had just days before performed a ritual to summon the supposed campus ghost. The night of the ritual, one of their pals was murdered … and they all might be next. (Yes, there’s a Barrett filmography pun in there somewhere.)

When the screenwriter and I jump on the phone for a Monday afternoon call, he’s quick to give Wingard a nod right off the bat; After all, their collaborations are quite beloved by the genre’s many diehards. “The only thing that really guides me creatively is that I’m really concerned about repeating myself too much,” he explains. “And I think Adam Wingard kind of feels the same way.”

“[With Seance], I did want a different tone and I did want a different feeling and I think the thing that is interesting is that my collaborations with Adam worked so well because we do share a lot of the same kind of values, but we kind of have different creative sensibilities in a lot of subtle ways,” Barrett notes. “There is somewhat of a tension between the stuff that interests Adam and the stuff that interests me from time to time. And I think our best collaborations have reflected both of our interests. Adam finds a way to make my depressing ideas more entertaining and so on. I think we tend to our strengths [and] tend to compensate for the areas that the other person isn’t that interested in.”

However, Barrett was responsible for the child that became Seance all on his own. In fact, his own inherited love of the Nancy Drew nostalgia that shapes the Agatha Christie-style mysteries inspired the story. “With Senace, I really did want to do a very old-fashioned kind of young-adult-style murder mystery, you know, kind of a slasher Nancy Drew, for lack of a better, you know, marketing hook,” he laughs about his script. “My mother was a mystery writer. When I was growing up, that was what she was really kind of working on. She got published in Alfred Hitchcock magazine and places like that.”

“That was right [when] my parents got divorced, so my mom just had always had these books of mystery fiction around and I would just devour those. And my father did as well,” he adds. “So by the time I was 7, I think I’d read everything that Agatha Christie had published, including just, like, boring essays and travelogs, stuff like that, you know, but I was that into it.”

It’s no surprise he accomplished that tonal goal. Barrett has a reputation as a genre hitmaker, having written film upon film hailed as a horror best. I’m talking You’re Next, segments of the V/H/S series, The Guest. Needless to say, he’s worked hard to master the tension required for the films he gravitates toward writing. But when V/H/S premiered in 2011, fans were a little stunned to see that the central story tying the vignettes together — written by Barrett — was bathed in misogyny and patriarchal power plays.

“You sometimes don’t realize the effect it’s gonna have if people see it, which at the time was not a certain proposition,” he says of the Sundance hit, the viral success of which was shocking. “We were absolutely going for a certain degree of, like, button-pushing shock value. I just wanted to upset people and get there. At that point in our careers, I will admit that my greatest fear was [basically] what had been happening, which is that I would just continue to be completely ignored and no one would ever see anything I did. I would just disappear and have to move back to my hometown where we were coincidentally filming V/H/S for no money. So there was an element of like true exploitational filmmaking, of just, like, just trying to be provocative. And at the age that we were at, I think we thought that that was maybe more artistically valid.”

Fast forward, Barrett’s approach has changed a lot. Ten years later, his instincts — particularly when it comes to how women function in the world of his films — have certainly grown up. Seance is anchored by a will-they-won’t-they flirtation between Waterhouse’s Camille and Ella-Rae Smith’s Helina, a shy and timid student who takes a liking to Camille right away. But he never intentionally set out to give the film an LGBTQ+ angle. 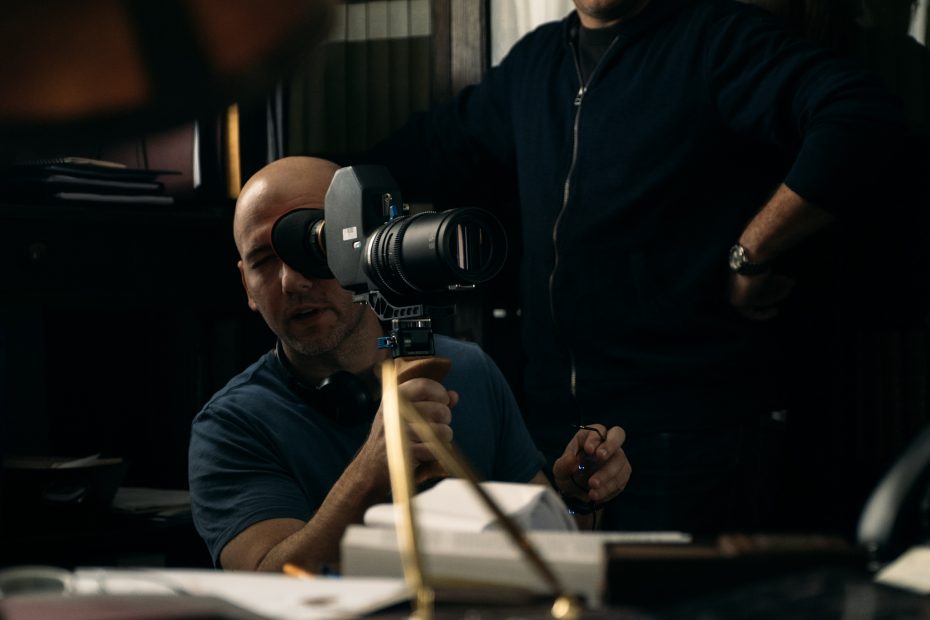 “I never really questioned that or second guessed it until we were in the editing room. One of my financiers wanted to cut it out of the film because they thought it would hurt our commercial prospects overseas,” he explains. “And that was when I was like, this is the movie to me. Like I want to be clear, the story of Seance to me is not this other stuff, it’s about Camille and Helina. That’s the story I want to tell here and whether I’ve done a good job or not, we can discuss, but like, that’s why I wanted to make this movie.”

His other financier’s daughter ended up coming to the rescue, catching a cut of the film and gushing over the pair’s subtle yet realistic connection and how it builds. Ultimately, this sealed the deal to keep the subplot. “A 14-year-old I’ve never met basically saved this movie,” Barrett laughs through the static of a mediocre cell connection, but I knew he really meant it.

While Seance may seem like your typical teen murder mystery on the surface, the film comes at the concept through the lens of “the possibility of human connection,” as Barrett puts it. “Two damaged people finding a connection.” Sounds hopeful, no? It’s something horror could use more of as us humans recover from a few years of hard damage. With folks like Barrett behind the camera in more ways than one, I expect we’ll be seeing more of that hope when we need it most. Thank God for the movies.

Seance is now available in theaters, on demand, and digital.