Signed to L.A. Reid’s Hitco label, Chelsea Collins is one to have on your radar. The San Francisco-born and Los Angeles-based singer, songwriter, self-taught producer, and multi-instrumentalist debuted in 2019 with her song “Tobacco and Tears” and has since dropped a series of tracks that have racked up the streams. While Collins isn’t a household name yet, it is very likely that music fans are already familiar with her work. Last year saw her release a string of singles that not only helped her career propel, but put her on the map. Her most popular song to date, “Used to love (L.O.V.E.),” has achieved more than 25 million streams and was followed up with another track that caught a lot of people’s attention, “07 Britney.”

Music and performing have always been a passion of hers. At the age of 3, Collins became fascinated with musical theater and had her parents pretend she was older than she was because she was so eager to join various local productions. Collins soon learned how to play classical piano, which led her to begin writing songs and develop a passion for storytelling.

At 23 years old, Collins is just getting started and has already teamed up with the likes of 24kGoldn and Grammy Award-nominated singer Andra Day. With that being said, superstar Swae Lee was introduced to Collins’s music and jumped at the chance to work with her. Their collaboration, “Hotel Bed,” serves as the lead single for Collins’s debut EP and powerfully showcases her songwriting skills. Not only that, she co-directed the music video, which will keep your eyes locked on your screen. Collins plans to release her first project this summer and the R&B ballad is a small taste for what she has to offer.

Ahead of “Hotel Bed’s” release, EUPHORIA. spoke to Collins about the making of the song and video, what fans can expect on her upcoming EP, and more about her creative process. 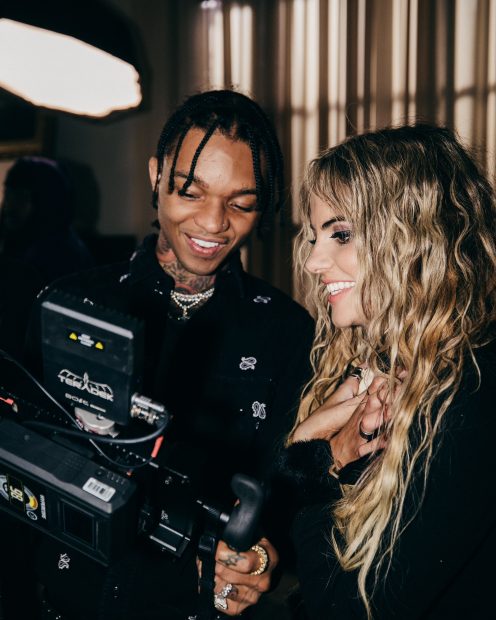 For those who don’t know, what is “Hotel Bed” about?

“Hotel Bed” is about introspectively reflecting on a long-distance relationship that had gone south. I felt super misunderstood in my last relationship, like my ex-boyfriend didn’t support my dreams, so I subconsciously/passively pushed him away. Looking back, I feel like my anxiety was the one telling me he didn’t support me or believe in me, that it wasn’t actually coming from my own instincts. After everything happened, I tried to travel and live my best post-breakup life, and even though I should’ve felt incredible, my heart and mind just felt like a black hole.

You had the chance to record the single with Swae Lee in the studio. How did this collab come about and how long ago did you write this song?

I wrote this song with my co-writer Nick over Zoom around the start of quarantine on my bedroom floor. I usually start all my songs on a guitar and then produce them later once I envision the production sound in my head. During the process of finishing the production, one of my co-producers was working with Swae and told me he had heard the song and wanted to do a verse. I was shook because I’ve been listening to his music since I was around 14, and I love him as an artist. He has such a beautiful tone and is such a talented writer as well. I never expected an artist at that level to fuck with my music, so it was definitely super inspiring and I was confused in the best way possible.

How was the experience recording it together in the same room?

It was honestly so much fun and a huge blessing. The real story is honestly crazy … truth be told, it was my birthday two days before and someone had drugged my water bottle and I ended up in another country, which legit had me traumatized. Then, I woke up the next day after everything had happened to a call from someone I work with saying Swae wanted to go to the studio that night and be a part of the song. The story sounds like it’s straight out of a movie; it was super unexpected, but I truly believe when life gets super bad, shortly after something amazing is waiting around the corner.

I’m naturally super socially awkward, especially after what happened a day or two before, so I was very nervous going there. But he’s so sweet and such a genuine, friendly person that I completely shed my introverted shell right away. We vibed and talked about life, relationships, music, Kim Possible characters for some reason? Shoutout to my girl tequila! But on a serious note, watching him record/his writing process was so insane because he’s such a talented writer/vocal producer all on his own, and I’ve never seen another artist work the same way he has. We stan Swae!

Swae Lee has been in the game for many years now. Has he given you any advice or tips?

The biggest thing I take away every time I’m around him is the importance of kindness. He’s just so genuinely kind and hardworking, and despite whatever industry you’re in, I believe that in life being a good person will always take you the farthest.

You co-directed the music video, what was that like? Can it be stressful?

Yes! I had a really specific vision in my head, so the edit of the video took a second because I was super precious with it. It was important for the emotion and the story to shine through. I didn’t really make a treatment in a traditional way, I wrote the story of the video like a chapter of a book explaining the relationship, so it was honestly intimidating because I didn’t know how that would look on camera. At the end of the day, I’m an introverted writer kid, and even just being sexual on camera is awkward for me. It’s usually something I’m only comfortable doing behind closed doors, like I won’t even hold hands in public because I’m so reserved lol. But Swae made it super easy because he’s a super dope person and we connected a lot on the fact we were both willing to go there. We both just channeled our past relationships and nothing was that scary, it was honestly super fun.

The video really paints a picture for the song. Would you say that “Hotel Bed” is as dark as the video portrays?

I think personally, yes. I’m definitely someone who struggles a lot with depression, so when things hurt, they hurt 10 times harder, and I will always blame myself for everything that goes wrong. Falling in love is the most beautiful feeling in the world, but once it ends, the level of hurt is also incredibly intense. I felt completely empty, heartbroken, and worthless after my relationship ended for a time period. I think the difference between the video and real life is the video paints a lot of what I was feeling in my head vs what my actions actually resulted in. The first love always cuts the deepest.

“Hotel Bed” is the lead single from your upcoming EP. What can fans expect?

So much more music! I’ve been working on an EP and album the past two years baring my soul, so I’m super excited to see how people react and what they gravitate towards. I feel like each song definitely has a different vibe because my ADHD gets bored when hearing songs that sound too similar, but I think what cohesively ties together the project is my style of songwriting. It’s very melodically fun and sweet, but it’s always paired with a dark emo undertone in the lyric.

What was it about “Hotel Bed” that made you want it to serve as the first single for the project?

I think what made me choose it was the way it touched my friends and family. They all know me and can always see past my bullshit when I pretend like I have no feelings, when the truth is, I’m actually an emotional basket case. “Hotel Bed” to me is a song that shows my vulnerability. I think it’s the most introspective song on the project, and every song on it is written pretty much about the same person. I promise I’m not crazy! With this specific song, instead of talking about how he wasn’t good to me, I wanted to reflect on how everything is two-sided, and how bad I fucked up the relationship as well. When you are laying up alone at night, all your thoughts rush to your head and it’s easy to start overthinking everything that goes wrong and how it must be completely your fault. Always remember though, the truth is probably somewhere in the middle of both sides unless that person is a sociopath.

What are you hoping listeners will take away from the EP?

My biggest goal for any music I release in general is to hopefully make people feel like they have a safe place and home within my songs. As a little kid, no matter what I was going through, I would always turn to artists like Taylor Swift or Britney Spears’s music to get me through every emotion, and their music felt like an escape for me. I want to do the same for my fans, and hopefully be able to express how they feel through words!

So far, you’ve allowed a few of your songs to have features on them. How do you usually seek out these collabs?

Both collabs have come from my co-producers working with the other artists. Collabs are so fun because it’s a dope opportunity to intertwine genres of artists that generally don’t make similar music and have different perspectives, and make something new that both artists have never made before. The music industry is such a small world, and I feel like everything seems more impossible than it actually is. In life in general, it’s so important to just try and shoot for the stars. The worst that can happen is someone says no, and then when the right opportunity comes along, you understand why things happen the way they do.

Is there anyone on your radar who you really want to work with next?

So many people! There are so many dope artists out right now and I could definitely write a super long list, but I would say my top five are The Weeknd, Taylor Swift, Post Malone, Britney Spears, and Lil Nas X.

How would you describe your artistry in three words?