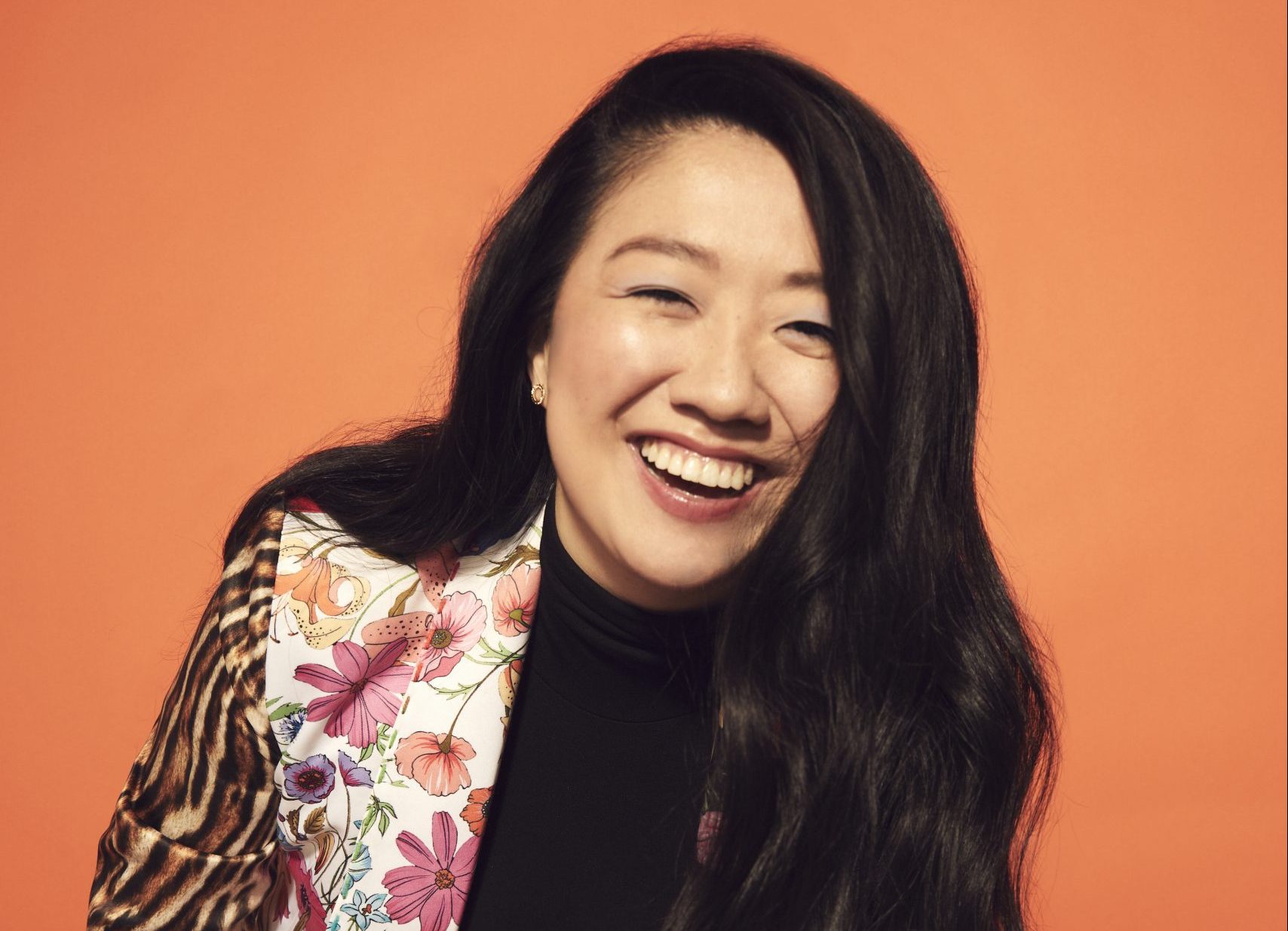 The comic and 'Good Trouble' star reflects on finding her footing in the COVID world and what's to come in season three.

An entire year into the pandemic, it isn’t a secret that performers that once thrived on live performances and face-to-face interaction have needed to find new ways of distributing art. The conversation that often centers on the plight of musicians extends just as plainly to artists of another variety: stand-up comedians.

Sherry Cola, comic and one of the stars of Good Trouble, has spent the last 12 months facing that same dilemma. Without stages, crowds, and (for much of the last year) television production, much of Cola’s career remained at a standstill while searching for innovative ways to continue her comedic work.

One solution — arguably the one that broke the most ground in the last year — is live-streaming. Platforms like Momenthouse and Instagram Live replaced what were once stages, and while it was exciting for Cola to see comics taking new avenues, there is a distinctly different feeling that comes with authentically live performance.

“Listen, it’s different,” Cola told EUPHORIA. “Nothing replaces the adrenaline rush and the risk, if you will, of performing live. You go up on stage, you don’t know how it’s gonna go. You get off stage, you’re on cloud nine. That’s an irreplaceable feeling.”

But the loss of live shows for now doesn’t mean that stand-up is dead. Rather, Cola said the Asian community, and Asian comics in particular, have perhaps never had a stronger connection than they do now while coming together for virtual shows and fundraisers, like one Cola described to support Chinatown in Los Angeles.

“I get chills just thinking about how much we have each other’s back right now,” Cola said. “And we’re truly just making up for each other in every way. It’s still very much alive, and I think when it comes back, it’s going to come back.”

While the reopening of comedy clubs isn’t a reality just yet, it no longer feels entirely out of reach. And, for Cola, some things went back into motion after Good Trouble revived production several months ago, and she couldn’t be more grateful for it. “I’ve just been busy with that, and really just counting my blessings,” Cola said.

But such a life-altering moment historically calls for reflection (for better or for worse) and a mass change in attitude. Good Trouble often tackles issues of racism, sexism, and discrimination more broadly on screen, so seeing an influx of people worldwide rise up to fight against systemic oppression was both familiar and fascinating to Cola.

Ultimately, it felt like people were beginning to finally understand the relevance and meaning of the phrase “good trouble,” a term first coined by Representative John Lewis and adopted as the show’s title, reflecting its grounding in social awareness and change.

But getting into said good trouble requires introspection and growth, hard-to-swallow pills, and putting real effort into meaningful self-reflection. Cola explained that, likely because of the pandemic, everyone is likely to have experienced some of that change (even the outcome isn’t quite larger than life).

“We’re not the same people we were back in March, whether it be just awareness of things going on or our skillset has expanded,” Cola said. “We’ve learned to be more independent and not be around people. I’ve just kind of learned to appreciate the little things, and at the same time, not take anything for granted, you know?”

And Cola seems to be somewhat driven by that very human way of thinking. This attitude is just a piece of why she continues to breathe passion into her creative work, even when its future felt the bleakest; if the world isn’t perfect (spoiler: it is not), then people can’t be, either.

That reality is one of the biggest takeaways from Good Trouble for Cola and, based on the engagement of its audience, the imperfections are a breath of fresh air for viewers, too.

“We have been about this life, and especially after this past year, we could not wait to get back on set and continue these stories, these reflections of reality,” Cola said. “At the same time, [it] just shows people in their 20s. It’s messy, it’s raw, it’s imperfect; that’s what I love about our show, every single character is flawed. Every single character keeps screwing up, yet you root for them because they are real.”

Though the cast’s onscreen relationships are often tumultuous, surely a result of that imperfection, the real-life dynamic among the cast is what Cola describes as family. They share a mutual excitement for putting in the necessary compassion, discipline, and love into stories that don’t just touch, but amplify dynamic social issues.

There are few television shows directed at a teen-specific audience that consistently breathe life into similar conversations, so such a strong force on television is unsurprisingly the root of long-lasting connections. For Cola, an only child, the cast’s bond is invaluable.

“We’re just surrounded by greatness, and we’re so blown away by each other’s performances,” Cola said. “And we’re just emotionally there for each other and in every way. It’s really cool, because I didn’t grow up with siblings, so The Coterie… it’s communal living, these are my brothers and sisters. That is a blessing, and I hope we get to keep doing it.”

As for how her character Alice will fit into that dynamic on screen this season, Cola explained that viewers will really see the culmination of Alice’s major growth points while she learns to become a “power top.” More than anything, Alice is starting to find comfort in her own skin as a queer, Asian woman while breaking the stereotypes of who she is expected to be at the intersection of those identities. “There’s so many layers to that, you know? It’s interesting,” Cola said.

From avoiding the topic of queerness with her family to finding her footing in the world of stand-up comedy, Cola has long been impressed by the writers’ representation of Alice in Good Trouble and likens some key pieces of Alice’s narrative in finding her identity to her own experience.

“Sherry in real life constantly walks the line of like, ‘You know what? I am outspoken. I want to break that stereotype, break those barriers and not be what a white America expects an Asian woman to be. And I’m going to be unapologetic, and I’m going to just completely prove people wrong.’”

Cola continued, “At the same time, ‘I’m happy to be here. I’m an immigrant. My parents had so little; I should be comfortable with this much. Why am I asking for more than I deserve?’ You know what I mean? Just this constant straddle of these two things, this dilemma, and I think Alice is in that same boat all the time.”

Now, in season three, Cola recognizes that she and Alice are more different than they are the same; she describes the experience as having a friend, of sorts. Though she can’t directly relate to Alice’s persona on screen anymore, Cola can find solace in the similarities among their stories.

Perhaps that’s why having some ambiguity in what is to come for Alice is positive for Cola. It isn’t so much about where Alice ends up or what her “future” is, but rather how she continues to evolve in whichever path she takes during and after the run of Good Trouble.

“There’s no real destination,” Cola said. “For me, I think it’s the journey that is so fun, just for her to continuously grow and find her voice and be comfortable in her own skin. I think we want that for ourselves, and we want that for everyone that we love. And Alice is someone that I love.”

Viewers will have to wait for weekly episodes to see the complete scope of Alice’s work this season, but Cola described the season’s motto as “speak up, speak out.” And during such a challenging year full of necessary reflection, overdue conversation and deep-rooted activism, Cola is excited for Good Trouble to be a catalyst in bringing each of those elements to the table.