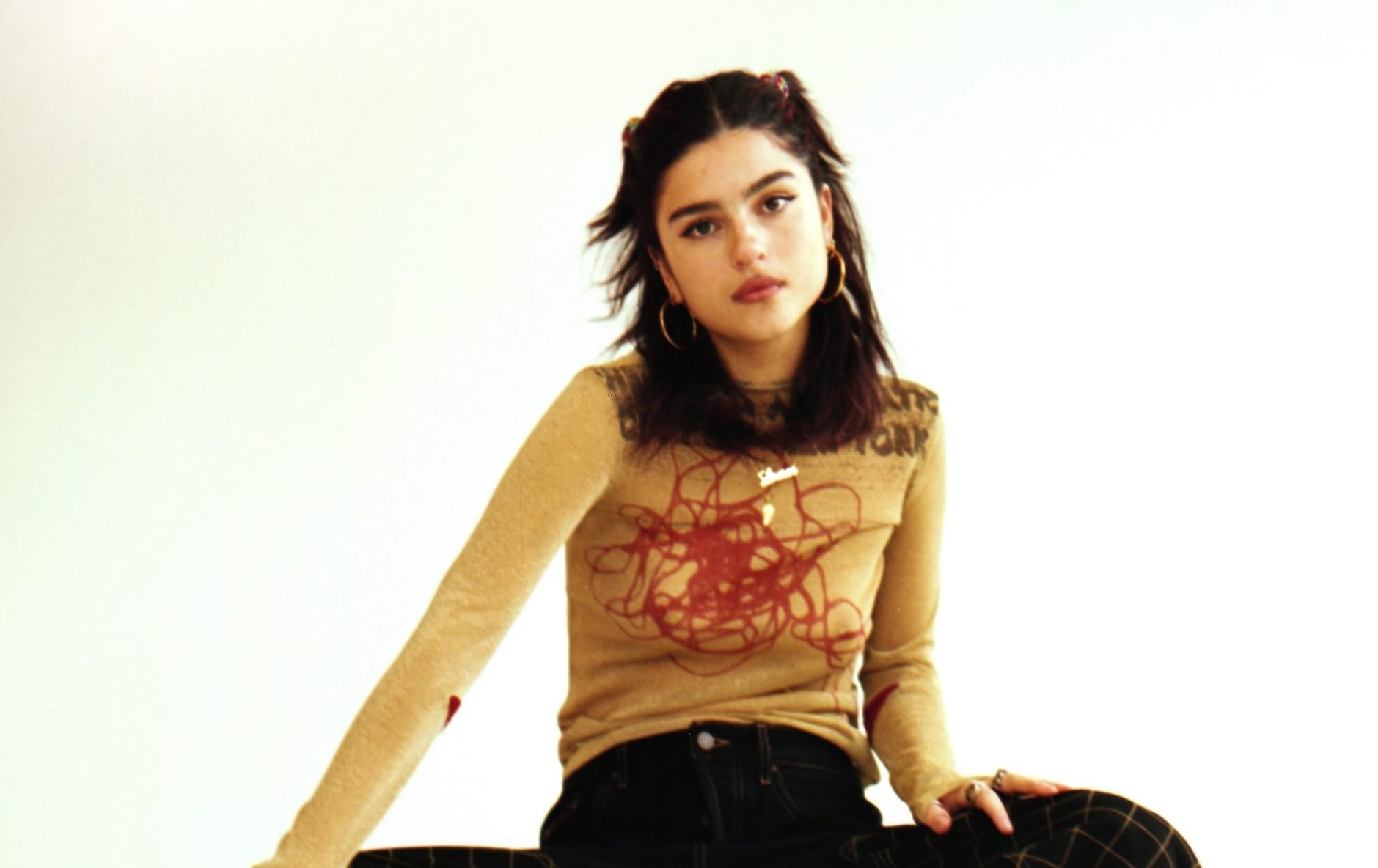 Before signing a deal with Interscope Records, renforshort had long been making music of her own. From Toronto, Canada, the up-and-coming artist drew from years of being inspired by musicians like Bob Dylan and Amy Winehouse to develop an edgy yet modern-day angsty rock sound. Falling in love with performing after an open mic night when she was fourteen, renforshort quickly made music her day job.

Her debut EP, teenage angst, showcased to the world what the young songwriter and artist could bring to the table. Her teen perspective laced with a fighting edge can be heard throughout her music. Her latest single, “Virtual Reality” blends her vintage influences with her intelligent and necessary critique on the world of social media.

The artist spoke with EUPHORIA. to tell us about the story behind her latest song and how social media has impacted her music career, mental health, and life.

How are you, really? Your last couple releases, “fuck, i luv my friends,” and “Virtual Reality,” are both telling about how you’ve been feeling emotionally while the world is on lockdown, but how are you doing right now in your own words?

Right now, I think for a lot of people it’s really hard to see the world go to shit and a good amount of people not giving a fuck about that and that’s kind of been the biggest contributor to my decline mentally during COVID. I personally feel a lot of anxiety about everything in relation to coronavirus. Taking my dogs for a walk is hard for me. I don’t see any of my friends. I just work from home. I feel like I’m doing my part and I wish that more people would do theirs because it kind of feels like you’re doing it for nothing because there’s so many assholes who just don’t give a fuck, which sucks.

“Virtual Reality” is incredible. It’s got a heavy rock influence sonically. Can you talk about where the inspiration for that sound came from?

I grew up listening to very guitar forward rock ‘n’ roll, and grunge — predominantly Nirvana, Pink Floyd, Billy Bragg, Smashing Pumpkins, Red Hot Chili Peppers, Stevie Nicks, Janis Joplin, and Amy Winehouse to name just a few. That was really the music that I knew. Growing up, my brothers and I would jam together in the basement, and guitar-forward music was what I knew. For me, you needed to have the guitar be the center of the song obviously besides the vocals. I’ve always wanted to make something similar to what I grew up listening to, but have a little bit of the modern edge, and I think “Virtual Reality” really captures that because on one hand there’s the music and then, on the other hand, there are the lyrics, which are super modern.

Melodically, the song is super contemporary! Pop-infused with an edge, which I think is quite signature for your sound. Does blending the rock with this pop vibe come naturally to you?

Yeah! I think to have a unique sound and blend what is mainstream now with what is just cool to me is all I could want when making music. So in my music, I blend pop with genres that I just listen to and enjoy. It could be folk mixed with pop, or grunge mixed with pop. I think that’s a cool way to approach music now. I have the experiences of a modern-day teenager and that’s what I write about whereas the composition of the music comes from what I grew up listening to.

Your music career has amassed amazing success and attention because of social media, and now on this single, we hear you sing, “Sometimes I wonder if I need a break from it before I break from it. I don’t want to live my life on the internet.” What’s the story behind this feeling for you?

I think that social media is the reason for a lot of our problems, Mentally, it’s exhausting and physically too sometimes. To be successful on social media, I feel like you lose a little bit of yourself and at points, you’re not being you. People follow you for you and when you can’t give them that, it sucks. Social media takes up, I would say, 75% of my life, which is fucking crazy and I think that everyone just needs a break from it.

Another fucked up thing about it is people can be such assholes and say horrible things and you just have to pretend like it doesn’t bother you, which is not the reality, and I just don’t fuck with that. I don’t wanna bash social media too much because there are a lot of things that I’m thankful for because of it like my career and my fans that I can communicate with so there are definitely a lot of great things about social media but there are a lot of shitty things as well.

Where do you turn to when you’re stuck, experiencing writer’s block, or can’t find inspiration?

When I can’t find inspiration, I turn to movies, television, and art. You don’t always have to write about things that have happened to you, just like an author wouldn’t only write autobiographies. You’re not always gonna have things happening to you that are exciting or worth writing about so you have to draw inspiration from other mediums whatever does it for you!

Do you feel like these next few songs you’re set to release this year are a continued chapter of the artistry we know from you from “teenage angst”? Or do you think this is a pathway to a new phase of your creativity?

Honestly, I think that this is kind of a new chapter. I’m still writing music in a similar realm, but I want to feel unique and I feel like with this EP, I captured that. There are a mix of genres, but everything sounds like it would be me, which is awesome. I’m just getting people more familiar with me and being more vulnerable, which feels really good but also scary as hell.

Between school, emotional stress, and just living, a lot of creatives feel overwhelmed by trying to juggle it all. How do you stay focused enough to keep creating music?

I think writing music is a good escape from emotional stress and life in general because you’re writing about those things and you’re letting those feelings out rather than bottling them up. The only really hard thing is having a session booked, but feeling no inspiration at that moment whatsoever because you are overwhelmed by everything else.  I stay focussed by getting in my head honestly, and that can fuck me up sometimes, but it leads to good music.

I read that you’re really inspired by Amy Winehouse. Do you think she influences your music and in what ways are you drawn to her character?

I’ve always been so drawn to Amy Winehouse. I grew up watching her perform. Most of my earliest memories involving music are of Amy Winehouse. I didn’t realize when I was younger what she was talking about in her music, but as I got older I became so drawn to her writing, vulnerability, and her dedication. I really do believe she’s one of the greatest artists ever. She was just fucked over by everyone. I love her, and I believe she’s a big reason I got into music.

If there’s something you could change about the internet or social media, what would it be?

I want restrictions. I don’t think there are enough in place at all. Social media really messes with a lot of people mentally. People should not be able to tell people to kill themselves online, or call them sluts, or ugly or anything hurtful. These are things that stay with people forever and have taken peoples lives. I think if social media was restricted a little more, we all would be a lot better off.

You’ve said before that your “platform is your music, and that’s like your diary.” You’re often vulnerable and ready to tell the truth in your songs, but there has to be something you haven’t shared quite yet. What’s something you wish people really knew or understood about you?

There are a lot of things I haven’t shared about myself because I just haven’t felt ready to. I want people to know that I am anxious as fuck, and I break down really easily. The tiniest little things will set me off, and I can get stressed out to the point of breaking down in record time. I’ll have days where I need to delete every app off my phone because if I don’t, I will completely spiral. I guess that’s what I want people to know about me that they don’t, and why sometimes I’m not as active as I’d love to be on social media.

The lyric, “I need something real,” on “Virtual Reality” is something I think a lot of people are going to be able to relate to, especially nowadays. What do you hope listeners will take away from hearing this single from you?

I hope people take away from this song that we all are in the same boat. For me, I always think about where I would’ve been now if it weren’t for COVID and I’m constantly reminded that everyone has been so fucked over by this. It’s a sad reality that the world we live in right now is so messed up that we lose the feeling of reality altogether. It’s easy to disassociate it, but when you wake up from that you realize the world is shit right now, and it can only really get better.