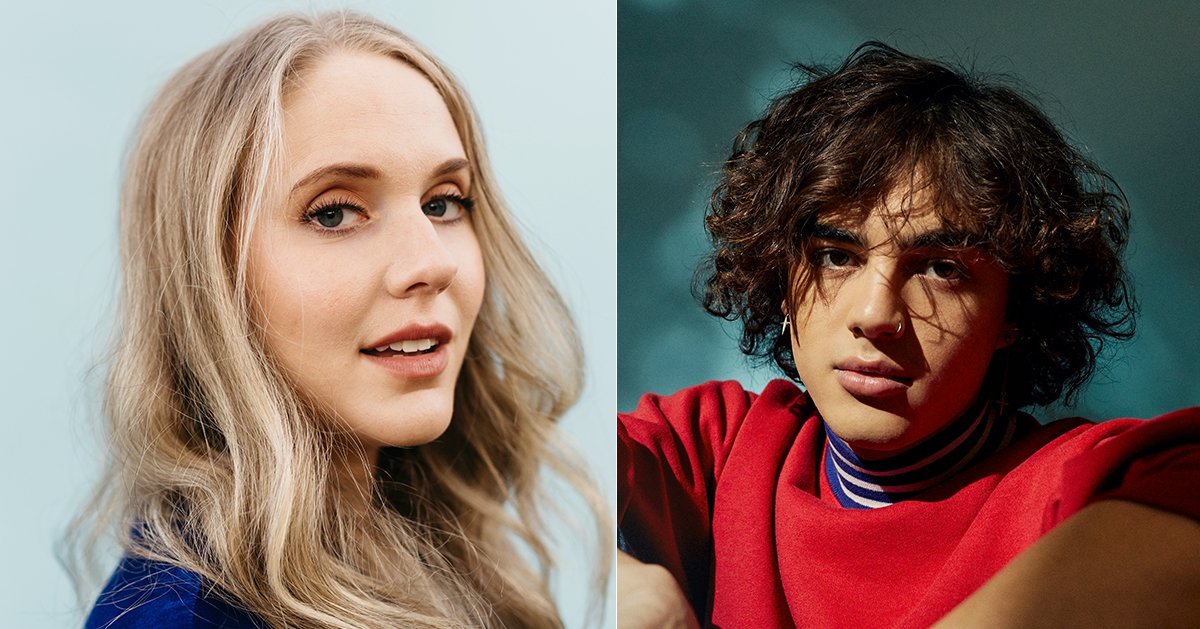 Netflix has no shortage of completely fire soundtracks. Whether it’s a Netflix original series or one of the streamer’s own movies, the soundtracks often feature big-name artists alongside up-and-coming bands and singers poised to hit it big. Netflix released the third film in the To All the Boys I’ve Loved Before trilogy on Feb. 12, and alongside it came a new soundtrack that settled seamlessly into Peter Kavinsky and Lara Jean Covey’s love story — played by Noah Centineo and Lana Condor. In this movie, the young couple even discovered a song of their own — a track created especially for this movie. We spoke with a few of the artists with songs on the soundtrack, including the artist behind Peter and Lara Jean’s song. Ahead, hear from Peter Manos, Jordan Suaste, Leah Nobel, and The Greeting Committee (who even appeared in the movie!).

“In My Head” already existed yet fits so seamlessly into this soundtrack. Can you tell me a little about the song and how you feel it adds to this mix?


Peter: I wrote this song a few years ago when I was closer to the age of the characters in the movie. I had been going through a similar situation as them so naturally it fits.

“If the World Ended Tonight” feels like the perfect dreamy song to accompany this movie! Can you tell us about making this song and how you feel it adds to the film?


Jordan: When I wrote this song with my collaborator, Jacob Ostler, it came from a very real and genuinely emotional place. We had both experienced a rough day and ended up letting out in musical form, and “If The World Ended Tonight” was born! I think that the song adds to the films soundtrack in the sense that it is a universal song about love and can really represent not only the relationship between LJ & PK, but also the relationship that LJ has with her friends and family.


I’d love to know the creation process for “Beginning Middle End” — since it was specifically for the movie, were Peter and Lara Jean an inspiration?


Leah: The day that Quinn Redmond (the producer and co-writer) and I got together to write, I had brought along a brief that I had received from my publishing company. The brief was from the music supervisors of a new romantic comedy that were looking for optimistic love songs for their film. It included a vague set of themes and a few keywords, but we did not know at that time what film it was for. Quinn and I thought it would be a fun writing challenge, so we ended up using that brief as a “north star” for the day, and filled in the rest of the song with personal anecdotes from our own lives. I collect song titles and themes in my notes app on my phone and “Beginning Middle End” was the title that resonated the most with both of us. The demo version we created that day was sent to the music supervisors and it sparked their interest. It wasn’t until that point did we learn what movie we had written for. Over the next 1.5 years we worked closely with the music supervisors to make the song a perfect fit for the film. We were able to view behind-the-scenes footage of our scenes to craft the song to those moments.

Your song basically became *the* song for Peter and Lara Jean’s happily ever after — first of all, how cool. Second of all, what do you think makes a song *the* song and how did you kind of channel that here?


Leah: It IS cool, I am still in awe. I think what made it “the song” is simply the emotional response it elicits. All the creatives who worked on the film know the characters and felt something real when they listened to the song. Sometimes you can’t explain it more than that — it’s just a feeling, which ironically is also a lyrical theme in the song (“when they ask why I can never explain, but a symphony played when you told me your name”). I think it’s a combination of the conversational human lyrics and the lush instrumentation. The perfect string arrangement in the “Always & Forever” version really layered on “the feels” and that was certainly done on purpose.

How was it recording “Beginning Middle End” for the movie and then putting your own spin on it?


The Greeting Committee: Recording “Beginning Middle End” was foreign territory for us. While we had recorded bedroom YouTube covers as a band before, we had never recorded a cover with such high stakes. We knew it had to be “right” in order for us to progress further into the soundtrack. In addition to that pressure, we also had pressure from ourselves for the cover to be authentic and genuine to our sound as a band. Overall, it went well and the song has been stuck in our heads ever since so props to Leah Nobel.

And how about actually being in the film — what was it like?


The Greeting Committee: Physically being in the film was an absolute dream come true. I mean, how many people get to say they’re IN a movie? I remember telling my parents and close friends when we left to film and then the immediate fear of, “Oh my god. What if I just told everyone and we get cut from the final edit?” Thankfully, the director was very generous with the screen time we got. The set was incredible. We filmed from dusk to dawn. And most importantly, everyone was so kind. Madeleine Arthur, who plays Chris, was especially welcoming to us. And, as a band who takes pride and note in the way we treat people, it really stood out to us and helped with the nerves.

You now have songs on a Netflix movie soundtrack, which is pretty huge, especially because Netflix is known for having really great soundtracks. How exciting is that?

The Greeting Committee: We are so grateful to have multiple songs in such a widespread soundtrack. To All The Boys: Always and Forever is a really lucky movie to land.

Jordan: OH, it’s so exciting! I’m so incredibly grateful to everyone on my team. everyone at Netflix and the TATB team for allowing my song to be a part of this project. Sometimes I have to pinch myself and remind myself that this is just the beginning. I’m excited to see what the future holds and am grateful for this experience.

Leah: Very exciting. It has been a tremendous boost for an indie artist like myself. I am so grateful.

Peter: It’s really exciting. When I was watching the second movie, I thought it would be cool to have a song in a Netflix movie. A month later, I got news that it was being used for the third movie, which was crazy.

Leah: The Garden State soundtrack is my #1. It enhances the emotional impact of the film so much. Zach Braff will forever be known for his gift for choosing the perfect song for a moment, and catapulting careers of indie artists.

Peter: My favorite soundtrack is from the movie Phantom Thread, and the soundtrack was composed by Jonny Greenwood.