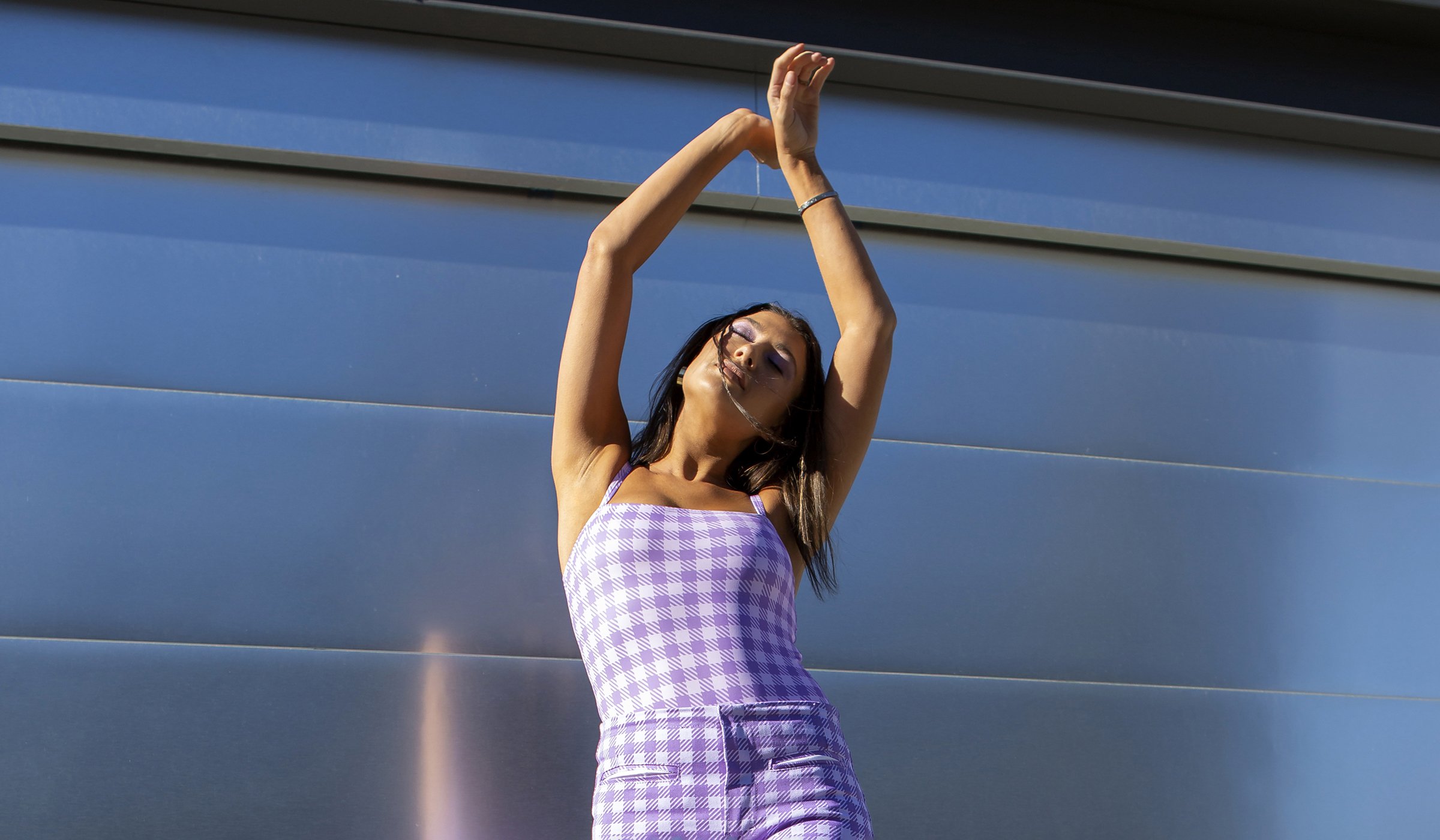 The music industry is filled with artists trying their hardest to be heard and discovered. Leah Kate has been dropping music for over two years independently and has continued to grow her fanbase organically. Late last year, her infectious single “Fuck Up the Friendship” went viral via TikTok and has performed extremely well on streaming platforms. Leah expresses her excitement over the success of the song and mentions to me how close the song is to reaching 10 million plays on Spotify alone. There is no doubt that when reading this that the song will be onto its next milestone.

Leah is extremely driven and knows what she wants. Last year was challenging for a lot of music stars, but that didn’t slow down the songstress. Leah has big plans for 2021 and she told EUPHORIA. all about them.

You recently released your single “Grave” at the end of October. What inspired the song and how long ago was it created?
I wrote it probably very close to when I released it, end of September. When I wrote it, I was like, “Holy shit, I love this! I wanna put it out ASAP” and just turned it around really quick. That’s usually how I am with songs I like. It was inspired by doing something stupid debatably with, like, an ex-boyfriend or someone you shouldn’t see and, like, taking it to the grave. I was just talking about seeing an ex and I said the words, “I had to take that to the grave,” and I thought that would be a really cool song idea. And then I just wrote it and I was like, “fuck I love this, I need to do something with it,” and then just turned it around really quickly.

Do you try to always release songs when they are fresh?
It’s more so because I get excited about them and want to put them out and not wait too long. There are songs that I wrote a year ago that I still love. I’ll get bored of them eventually, but I try to release them quickly just because I’m like “oh my god I love this, time to put it out” and I want fans to hear the new music. I’m very fast-moving, I hate sitting on stuff.

The track came soon after “Fuck Up the Friendship,” which is currently your most popular song. Did you feel any pressure to drop something that would receive a similar reaction or was the plan always to release it?
Well, “Fuck Up the Friendship” started blowing up the week I released “Grave,” so I didn’t expect it and didn’t know it was going to blow up. It was kind of all happening at the same time but no, I don’t really feel any pressure. I’m just excited that people are finding all of my music finally in such a rapid pace. It brought people to “Grave,” it hasn’t exploded as much as “Fuck Up the Friendship” because that song is going viral all over the world and just going crazy, it’s about to hit 10 million streams. So no, I was just excited that people would find that song too. I want people to able to find “Friendship” and then find “Grave” and understand me and my projects more.

What is it about “FUTF” that you think has really resonated with people?
It’s just so honest. First, I think the concept is really cool for liking your friend and fucking up the friendship, I don’t think that’s ever been done; it’s very unique. The production is amazing, the thumpy bass is really in in music right now. It’s super honest, relatable, and catchy as fuck. I took my life and wrote it down; it was so easy honestly. It was written off of a true story. I just put it into a song and people liked it.

It’s one of those songs where you only need to listen to it twice and you already know the words to the chorus. It’s very clever.
Yeah, it’s super sticky. Everyone that listens to it just adds it to their library and keeps playing it from what I’ve noticed based on my Spotify stats. *laughs* So that’s been cool.

Has there been anyone in particular that has reached out to you about that the song that came as a surprise?
Yeah, there have been massive celebrities who have posted it, like Jamie Lynn Spears, Bella Poarch, who is a huge TikTok star, and Bella Thorne playing it on her Instagram. It’s crazy, there are loads of celebrities who have posted it and have listened to it, which I think has helped to blow it up more.

How important is making playlists and streaming numbers for you at this point?
I’m on every major pop playlist right now and what’s really breaking songs at the moment is TikTok. Spotify really helps and it puts you in front of people and it helps with visibility. I got added to Pop Rising, which has been huge for the song. It’s like the biggest Spotify playlist for pop music. So many have discovered it off of that so it helps a lot. That and TikTok. Amazon also has gone really hard on the song, so it’s been really nice.

Throughout your career so far, you have consistently dropped singles and two EPs to date. Have you been saving songs for an album or is a full-length LP not on the cards yet?
No, it is. I’m working towards a bigger album right now. I’m going to be dropping more singles relatively soon.

Do you feel like there will be more pressure when delivering an album because it has that huge title and is considered a big thing?
For sure, there’s more pressure. I’ve never put out an album before, so there’s just going to be pressure regardless. I’m very excited and I’m working on it every day.

Is the aim to release an album this year or are you going with the flow?
It will for sure come out this year.

On average, how long does it take for you to write a song?
It could be 30 minutes or five hours. It just depends. I wrote “Fuck Up the Friendship” in 45 minutes. But then, I re-did the production and vocals and all of the other stuff that takes longer, but the actual writing part of it can be anywhere from 30 minutes to a whole day.

Is there a song in particular that you’re most proud of?
Yes, my next song is my favorite song I’ve ever done. I’m so excited about it, I think it’s my best song yet and I cannot wait for it to come out.

You’re an independent artist. What made you want to instantly go down that route and not sign with a major label?
I just wanted to have more control and ownership. I might be signing to a label, soon. I’m such a hard worker and I like to do my own art and visuals and choose what the production’s going to sound like and not have anybody tell me what I need to change. I like to do the vision I have and don’t want anyone to tell me otherwise. It’s nice having that freedom and I’m in control fully with no one else in the picture really. I have my team in place and management but I’m fully in control and running the ship. That’ll probably change if I sign to a label, which I’m OK with but it’s good to start out this way and being able to blow up a song independently has been super cool and exciting. So, that’s been fun.

Has that always been the plan or did your decision to sign with a label change recently?
No, I’ve always wanted to sign eventually. I don’t know when the perfect time is but the plan has always been to start out independently and figure out my sound and get some buzz around me and release dope songs. I think eventually you need the power and the machine behind a label to get to the next level. Yeah, I’m totally open to a label and talking to a bunch of them now just to figure out the next steps.

With the ongoing pandemic, how have things helped or changed your creative process?
I think the pandemic has helped, because when I couldn’t leave my house for six months, I was just writing and taking songwriting classes and piano lessons several times a week. I couldn’t really work any part-time jobs, I was just at home being creative. I think it was really helpful. I wrote all the songs I released this year from my bed. I think I probably wouldn’t have done them if it wasn’t for the pandemic.

What and who is inspiring your new material?
I’m very inspired by my life and my thoughts, which are really hectic. *laughs* Not hectic, but I have a lot going on constantly. I always write about what’s going on around my life and what I’m inspired by.

I bet you can’t wait to perform the new material once the world allows you to.
Yes! I’m so excited, I can’t wait. Hopefully, we’ll go on a tour when this whole thing is over.

Have you set yourself any goals for this year?
Create new music, connect with my fans, work hard like I always do, staying focused.