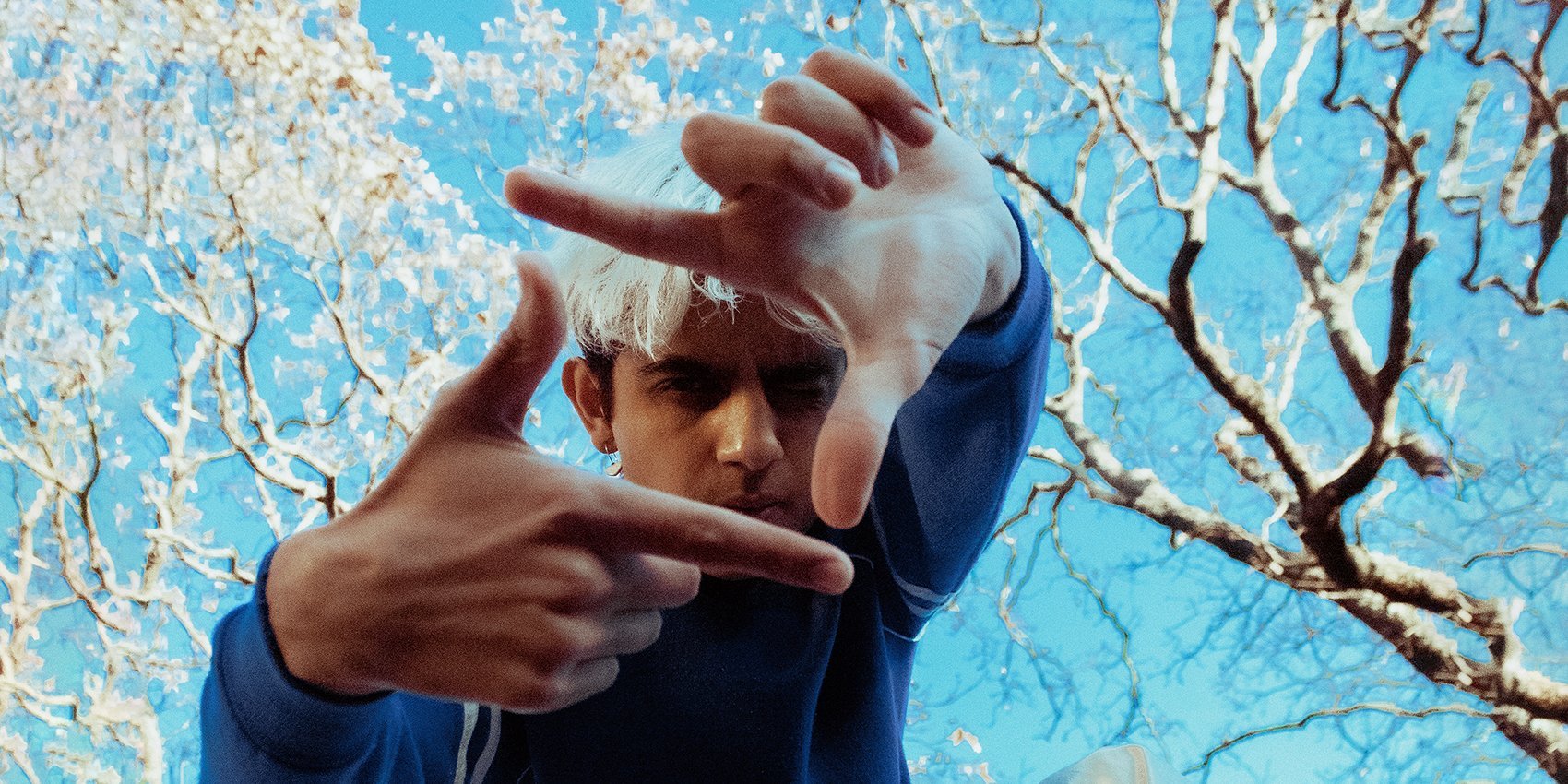 It’s 3 a.m. on Twitter. While most of us are either asleep or refreshing our explore pages, 21-year-old Curtis Waters is up connecting online with his fans one-on-one about mental health, fears about the future, and providing advice to anyone awake who may need it. Opening up and sharing his authentic self is the only way that he knows how to be, he says. For the “Doodoodoo” singer, his thousands of fans are what he considers to be close friends and social media is his journal for connecting with them.

“When I was 13 or 14, I was like ‘oh man, someday I’m going to make an album about my mental health, and I’ll help people,'” Waters recalls. “I remember every morning when I was brushing my teeth, I would pretend I was getting interviewed and come up with questions.”

Years later, the Nepali-Canadian producer and singer sits on an exclusive interview with EUPHORIA., living out those early manifestations. This time, though, he doesn’t have to create his own questions. He says that a younger version of himself would be proud of his accomplishments today (even if he hasn’t become a Pokémon designer like he once imagined himself to be.)

And his whirlwind of international fame all happened just last year. His TikTok viral hit, “Stunnin'” ft. Harm Franklin went platinum and racked up 700,000 streams a day at one point last summer. Since its popularity, Waters has garnered recognition from celebrities like Dixie D’Amelio and Paris Hilton, landed a licensing deal with BMG, and saw his song featured in a Mercedes-Benz commercial. He was able to leave his customer service job at Tropical Smoothie in North Carolina and buy his first car — a shiny new red Tesla.

Amidst it all, though, he’s still managed to stay grounded.

“I’m just a guy figuring shit out and just as depressed and confused as anybody is,” he says, residing at home in North Carolina with his family. “I’m flattered that people put me on a pedestal, but deep down I kind of feel unworthy sometimes. I have really bad imposter syndrome, to be honest, but I’m working on it.”

And he invites listeners into his process as he does work on himself with intimate lyrics on his first album, Pity Party, released in October of last year. On it, the singer approaches conversations regarding self-worth, insecurity, and anxiety.

“When I was writing this album, I wasn’t thinking career-wise. I was thinking that I needed to get my shit together because I was a big wreck mentally at the time,” Waters says. “I had just gotten diagnosed with bipolar disorder and it was a lot and I didn’t know why I couldn’t be what my parents expected me to be.”

He created the 12-song project before “Stunnin'”s widespread acclaim with what he describes as a hands-on approach at production. And just because he’s now signed to a major music label doesn’t mean that he has any plans on changing his crafty process. For his latest single, “Doodoodoo,” Waters says that he made the song in the same way that he did with his earlier work: at 4 a.m. by himself on his computer. He commissioned the song’s animated artwork from an artist that he found on Instagram.

“I’m just up making these cute beats on my laptop and then I wake up and I’m like ‘OK, I should release this,'” he says. “The only thing is that I actually have a professional mixer for the first time but other than that it’s still really DIY.”

Because of his creative control and endless creativity, each of his songs is wildly different from one another. Waters says that he makes music for how he feels, which doesn’t always fit within a certain brand or genre. Take his edgy rock single “System,” which he released directly after his breakout pop-rap hit “Stunnin'” for example. And there’s no intent behind it, other than staying true to his emotions in a given moment.

“I struggle not to switch it up,” Waters says. “It’s not me trying to keep things fresh. I just get bored and honestly, I think I’m going to let myself get crazier.”

His limitless music isn’t the only unpredictable thing about the former University of North Carolina student either. Whether sporting dangly heart earrings or pink butterfly jackets on Instagram, Waters’s quirky personal style is ever-changing by the moment too. He says that some of his fashion idols are “old Asian ladies at the bus stop.”

But growing comfortable in his expression has been something that he describes as a long time coming.

“When I was younger, I was really insecure about how feminine I was and I was bullied for it a lot,” he said. “I used to pretend to be something that I wasn’t, even racially. I used to whitewash myself so that people would accept me, but as time went on, I became more comfortable with myself because I just feel like everything is made up. It doesn’t matter. I can dress how I want. I can wear what I want. I can kiss who I want. It doesn’t matter. I just feel like now I’m able to express myself.”

But even as he navigates through his proud and confident expression, there are still plenty that try and bring the South Asian artist down. He mentions racist comments under his music videos and social media platforms of listeners who were negatively shocked to discover his race after listening to his music.

“They say, ‘oh, he looks like Baljeet’ or any random Indian cartoon or whatever and I get it because there’s just no representation for brown people in the media,” he says. “In their head, there’s this idea of what every rapper or musician should sound like. There’s just not enough information out there for people to know that there’s all types of brown people.”

And expectations have played a big role in the artist’s life. Within the brown community, Waters referred to himself as the “black sheep,” for not being like everyone else.

“Everyone was always concerned because I was the one brown kid that wasn’t really pursuing school fully,” he says. “It was like, ‘oh, he dyed his hair!’ I feel like in our community, small things like that are a big deal and they try and act like you’re messing up.”

But the fears that Waters wrote about in Pity Party about not living up to his family’s expectations came full circle. He says that his family is supportive and proud of him now, as well as are the various communities that he grew up in.

Waters says that in the future he plans on creating an album that his younger self would have listened to, which is more punk and grittier. In the meantime, he’s managing his stress by going on walks with his family and rewatching Jersey Shore with his girlfriend (which he regards as a classic time capsule of history.) He’s managing his mental health day by day, talking to fans online, and creating incredible music that he can’t wait to share with the world.

“I’m expressing what I feel and what I’ve been through,” he says. “If that helps you, that’s great. If it doesn’t, maybe it’s not for you and I try to make positive changes to my sound but you can’t do that all the time. Sometimes you’ve just gotta make music about pussy and you know what? That’s fine too.”