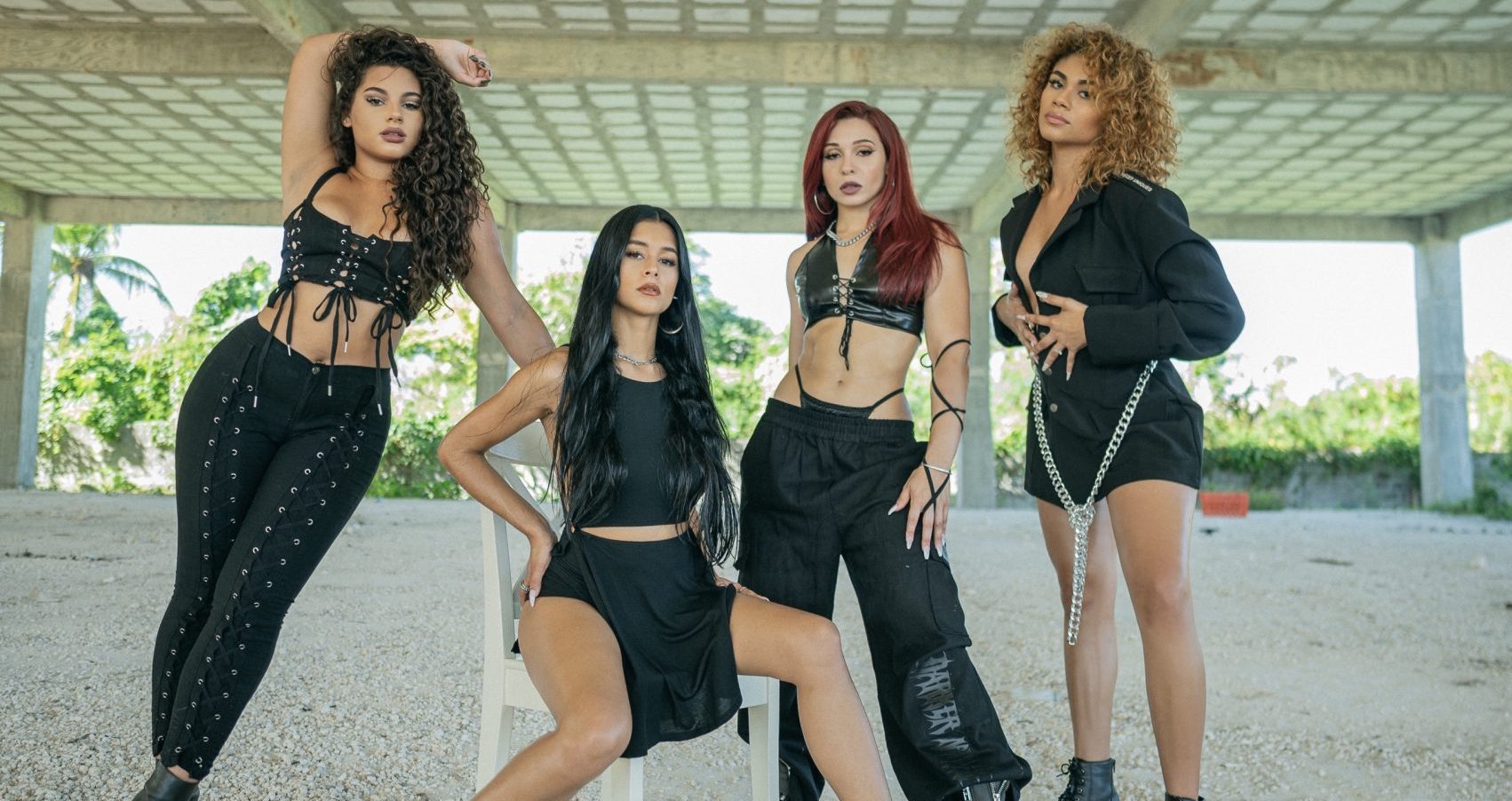 Named the world’s first ever bilingual Latin girl group, Bella Dose are ready to be the next big thing. The songstresses, who by the names of Brianna Leah, Jenni Hernandez, Melany Rivera, and Thais Rodriguez, have consistently released material over the past few years and are ready to give listeners more with a new eight-track EP, Suelta.

As expected, their songs are full of energy and personality. On TikTok, they have already made a huge name for themselves, achieving over 19 million likes and 1.2 million followers.

EUPHORIA. got the chance to learn more about the group, their new EP, and what goals they have set themselves for the future.

You have been named the world’s first bilingual Latin girl group. Was the plan to always sing in English and Spanish?

Jenni: Yes! Since we’re all Latinas, we wanted to incorporate our cultures into music. We want to cross over and influence both the American and Latin industry.

Who are your biggest influences?

Brianna: Some of our biggest influences are Destiny’s Child, Spice Girls, Menudo, and Pussycat Dolls.

For those that don’t know the story, how did you all meet?

Jenni: Our manager and creator of the group, Vicky Curiel, travelled all across the US holding auditions for the girl group. She found us all in Miami and then flew us out to LA where we officially met and grew together into what is Bella Dose.

Describe yourselves each in three words.

Thais: I would say I am fierce, independent, and ambitious.

Jenni: I am determined, enthusiastic, and open-minded.

Melany: I would describe myself as passionate, creative, and motivated.

Your new EP has a lot of flavor to it. Do you each have a favorite song from it?

Thais: My favorite song is, “Si Me Llamas.” I love the attitude behind it and how it is so relatable. Also, the track just hits different. The blend of bachata and urban music is something that I did not know I needed in my life.

Brianna: My favorite song from the EP is “Suelta.” I think it’s such a bop. You could play it anywhere and I think people would dance.

Melany: My favorite song from the EP is also “Si Me Llamas”! When we wrote the song, it all flowed together so naturally, and the bass is definitely one of my favorite parts of the song.

Jenni: My favorite song from the EP is “Si Me Llamas.” I love how we mix bachata and urban music.

What inspired your latest single “Suelta”?

Melany: We really wanted to make a party song that was extremely danceable and empowering for women. We heard the beat to the song and instantly thought, “What if we wrote a song about getting dressed up, going out, and having a good time with your girls?” “Suelta” was born from this idea, and the rest was history!

Is the plan to release more music videos for all the tracks?

Thais: We are definitely releasing more music videos for the songs on the EP. We have a music video to almost every single track. It’s really cool to see how our vision has come to life in every aspect. From the lyrics and tracks to the music video concepts and visuals.

Brianna, you got to collaborate with your sister, DaniLeigh, and brother, Brandon Bill$, on two separate songs. How was that?

Brianna: Doing a collaboration with my siblings was very different, because believe it or not, we’ve never worked on music together before, soooo for these songs were our first time.

At 10 years old, you were taught the ins and outs of the business and how to craft a record by the legendary and late Prince. Were you able to process that moment at such a young age?

Brianna: Honestly, I don’t think I’ll ever process it. It’s not every day you have Prince as your mentor. He was always giving me the best advice on the music industry and how to be a real artist.

You have released a lot of songs over the past few years. Have you been saving material for an album? Is one on the cards?

Thais: We for sure have been saving material for future releases. We like to be prepared and we love to make music, so we make lots of it all the time. As for an album, you might just have to wait and see!

Is there someone that has reached out to you that has come by surprise?

Thais: Well, maybe not reached out but many artists have interacted with our posts and covers. Since we upload covers to their songs and tell people to tag them, some of them will like or even leave a comment. For example, Bazzi, Leslie Grace, Meghan Trainor, Nicky Jam, Saweetie, and Katy Perry. We’re so fortunate that social media gives us the opportunity to be recognized by such amazing artists.

How has the ongoing pandemic helped/changed things recently?

Jenni: During this pandemic, me and the girls have adjusted well by brainstorming new ideas to release content. We have developed ways to do a cappellas virtually through video and dance videos, together, while apart. We’ve also been super careful with testing beforehand and wearing our masks in sessions and when working with others.

What would your dream collaborations be?

Melany: We have so many dream collaborations! Some of our dream collabs would be Bad Bunny, Ariana Grande, Becky G, Lunay, Daddy Yankee, Nicky Jam, BLACKPINK, Rosalia, and Billie Eilish.

Have you set yourself any goals for this year?

Melany: We definitely have set goals for this year. There’s so much to do and so much to accomplish, but one of the goals that we would die to achieve this year is getting one of our songs on the Billboard charts!