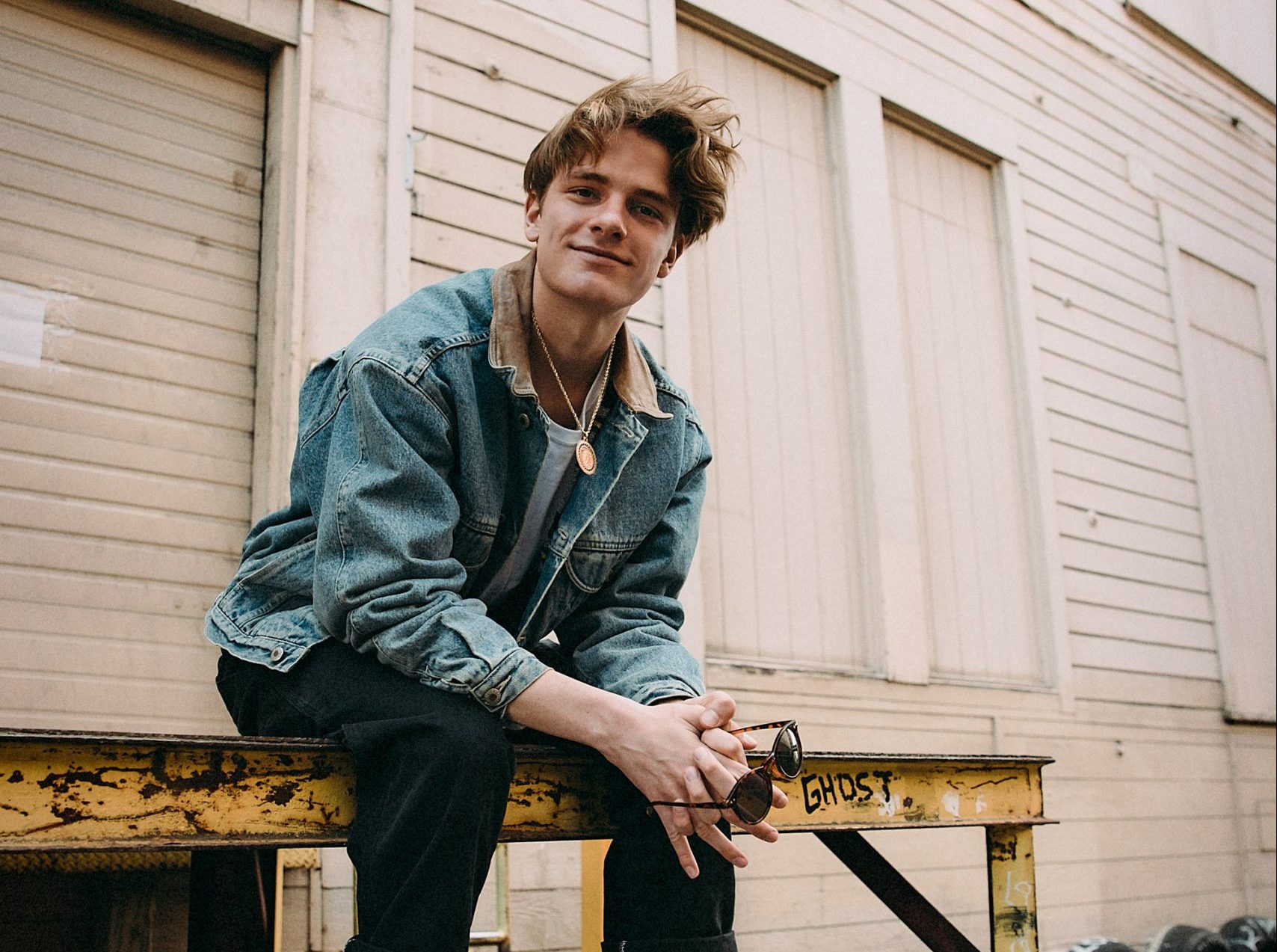 Mcamp — sexy in the morning

What is there to know about rising star Mcamp? Well, he’s a self-taught, 21-year-old singer-songwriter from Portland, OR, with a lot of soul. Not only that, he mixes, masters, and produces all his work.

Mcamp is starting off 2021 with the release of his new single, “sexy in the morning,” which hears him taking influence from the likes of Miguel and D’Angelo. The smooth track may be short, but it’s enough to make you want more or even put it on repeat.

He is managed by Rob Stone, the founder of the iconic The FADER, and is the only artist he currently manages. Why? because Mcamp is the real deal. EUPHORIA. got the chance to talk to the duo to find out how they got working together. Mcamp expressed what it’s like being managed by a legend with many years of experience while Stone explained what sets Mcamp apart from the rest, why he believes he is going to go far, and the moment he took him to meet Babyface. Yes, BABYFACE.

Were you familiar with Rob before taking him on as your manager?

Mcamp: You know, I was actually not familiar with Rob. In fact, I wasn’t even sure what The FADER was at the time. It all just sounded very legit to me, and after doing some research, checked out The FADER and even Rob’s Wikipedia page, I got a better understanding of who he was. Rob’s got a crazy history in the music industry, though. I swear he’s always got these new stories that are insane, and he just tells them like they were another day in his life. He got dunked on by Michael Jordan…unrelated to music, but, like, what?

What has it been like working with someone who has many years of experience in the music industry?

Mcamp: Obviously, it’s very, very nice. I’m so young and still rather new in my musical journey — there’s still a ton of stuff that I have to learn. Working with someone as experienced as Rob really helps me settle in and trust the process. I trust that he knows what he’s doing, and I trust his opinion. As a result, I can really focus on what I know best — just making good music.

Has the ongoing pandemic changed or helped your creative process?

Mcamp: The pandemic has made things better in some ways and worse in others. Definitely has altered my creative process all together though. I’ve gotten a lot more into production and beat making, which in turn has become a large part of my process. I think the reason for that is being able to stay in my little bedroom studio for hours and hours without distraction. I get to really hone in on every part of the song and make arrangements and true compositions. It’s been really great. The pandemic has really put a dent in my inspiration though — I don’t get to experience things. There’s no going out to the bars on Friday night, drinking a little too much, there are no meeting new people. I guess it’s hard to find songwriting inspiration sometimes unless I’m trying to write about my mom or my dog.

Is a full-length project on the cards soon?

Mcamp: Ha. My listeners are gonna have to wait a little while for that one. Like I said, I’m so young, and I’m always learning. I’m still discovering my sound — I love all genres of music, so I want that to show through my music. When I think of a full-length project, I think of records like Voodoo by D’Angelo or Tapestry by Carole King, or What’s Going On by Marvin Gaye. Those are records that really get me going. When I release a full-length project, I want it to really get the people going. I’m just not there yet at all. I need to continue to be a student of the music for now. I have to keep creating and learning. I have to find my way of saying something new with words and sounds. But someday, yes, there will be a project, and it better be stupid fire. Singles will keep coming though — and maybe an EP in the near future.

How long ago did you write your new single and what was the inspiration behind it?

Mcamp: So I started to write “sexy in the morning” when I had COVID and I was quarantining at the USC Hotel. I actually had the idea for “sexy in the morning” for months before that, I could just never find the inspiration. I was hyped about that concept though — one of those ideas that’s so simple you can’t believe nobody’s written that song yet. Those are the best. I wrote the chorus finally while I was quarantining, and when I got back, I actually ended up meeting my current girlfriend. That really pushed the song to the finish line. She just looks so damn good in the morning! Song material for sure.

How did you discover Mcamp?

Rob Stone: A ton of music is sent to me through DMs, through my email, sometimes people mail it to me, but also I get friends and people calling me saying, “Hey, my brother’s best friend’s sister has a kid who can sing, can you check out the music?” And those things really never pan out. You know, it’s rare that they do and obviously, I want to be respectful to people who want to send me music and listen, but it’s hard. But I had a friend who had a friend whose sister has a son who plays music, and she thought it was really cool, and I respect her so I listened to it. And literally the songs I listened to just grabbed me. I was like, wow, this kid’s really talented.

It turned out he was only 18, and it was just one of those things where I’m like, let me hop on the phone with him. So I hopped on the phone with him, and I thought he had a really cool vibe. I was heading to LA and he was registering at USC. He had traveled with his mom from Portland. I met him for lunch, and I think I connected with him not just on the music level, but he was a soccer player too, so we kind of connected on that.

I noticed how calm he was in his own personality. He wasn’t trying to impress me. I saw this really confident, but humble person who was just really honest about how much he loved music. I took him early on to meet Babyface in Babyface’s studio — and that’s when I first saw him play live. His nervousness was palpable as he sat in front of Babyface, who’s the king of R&B music and songwriting. Then Face handed him a guitar and he just bodied it, crushed three songs in front of Face. In that performance, I saw he was the truth. He has that extra gear that takes you there. If he puts in the work and I’m sure he will, the sky’s the limit.

What is about him that you believe sets him apart from his peers?

Rob Stone: I’ve told Michael this, you know, but it’ll be up to him. From what I see talent-wise, if he wants to be a household name, have Mcamp all over the place, radio-wise and streaming-wise, touring, he can do that. But also, if that didn’t happen for him, he’s going to have a long career in the music business as a songwriter and a producer. He just has such a talent of understanding sounds and melodies, that I think he’s gonna have a 50-year career of creating great music, whether he’s front and center or if he’s writing with someone. It’ll be up to him how his career goes, but he’ll have the opportunity to do both.

What is the main goal you would like to achieve with him in 2021?

Rob Stone: It’s funny because obviously, this past year has been so weird. The night before I took him to the studio to see Face, we were having dinner outside in LA and I said to him, “The most important thing I can tell you to do, the next six, nine, 12 months, is start playing in front of people. And I don’t mean like big gigs. Walk into a coffee shop by USC, or go to the campus center and start playing your guitar. Most people aren’t going to pay attention to you, because they’re not there to hear you,” I said. “But you’re going to connect with certain people. Go sit under a tree on campus and see if people start coming around, or start asking you questions or telling you they really liked a certain song. Because that’s when you’re going to start developing and finding your voice. And, you know, if you do that — if that’s all you do in 2020, that is going to change how you make your music in the year coming up. I’ve seen some artists try to go from obscurity to touring with the biggest act, and it can be a disaster because they just can’t hold the stage. They can’t hold an audience. And I think musically and song-wise, he’s there. So I just want to see him get really good and understand what people are attracted to him as he plays live. I think that’s the key. Absolutely.

Where do you hope to see Mcamp in years to come?

Rob Stone: In the studio, I swear, I just want to see him keep making music. He’s gifted, and the world will see that as he puts more and more music out. I have trust in him. I just see that he is very comfortable in what he does, and he’s very confident in what he does. Skills wise, the way he can layer vocals and the way he can bring in sounds and build a melody and really put together a song and add feeling to that song is incredible. I’ve been around so much talent, and so many incredible talents. I’ve been in the studio with them, and I just see something really special with him in that way. And then, in addition, I think his honesty and hubris is amazing because when we sat with Babyface and went into the studio, we walked in and the first thing he asked Mike was, “How are you feeling?” and “How are you doing?” and Mike’s like, “How am I feeling? I feel amazing, this is my first time in a studio!” It was so honest and sincere. He wasn’t trying to big-time Face.

Has becoming a manager for Mcamp been different from what you expected?

Rob Stone: Being a manager, you know, more than anything, I think is having a heart and a real appreciation for the talent you’re managing. And that’s all I can do for Mike. I was talking about this before, it’s like, I just want to open his mind and give him the ingredients to go in the kitchen. I don’t want to be in the kitchen with him, he’s going to do that. If I can just give him all the ingredients and I don’t even tell him which ones to use, and he uses them himself, I think that’s how I kind of look at management. I think that part of it is really exciting, that I can have so much trust in an artist like that, you know — it makes it easy for me.