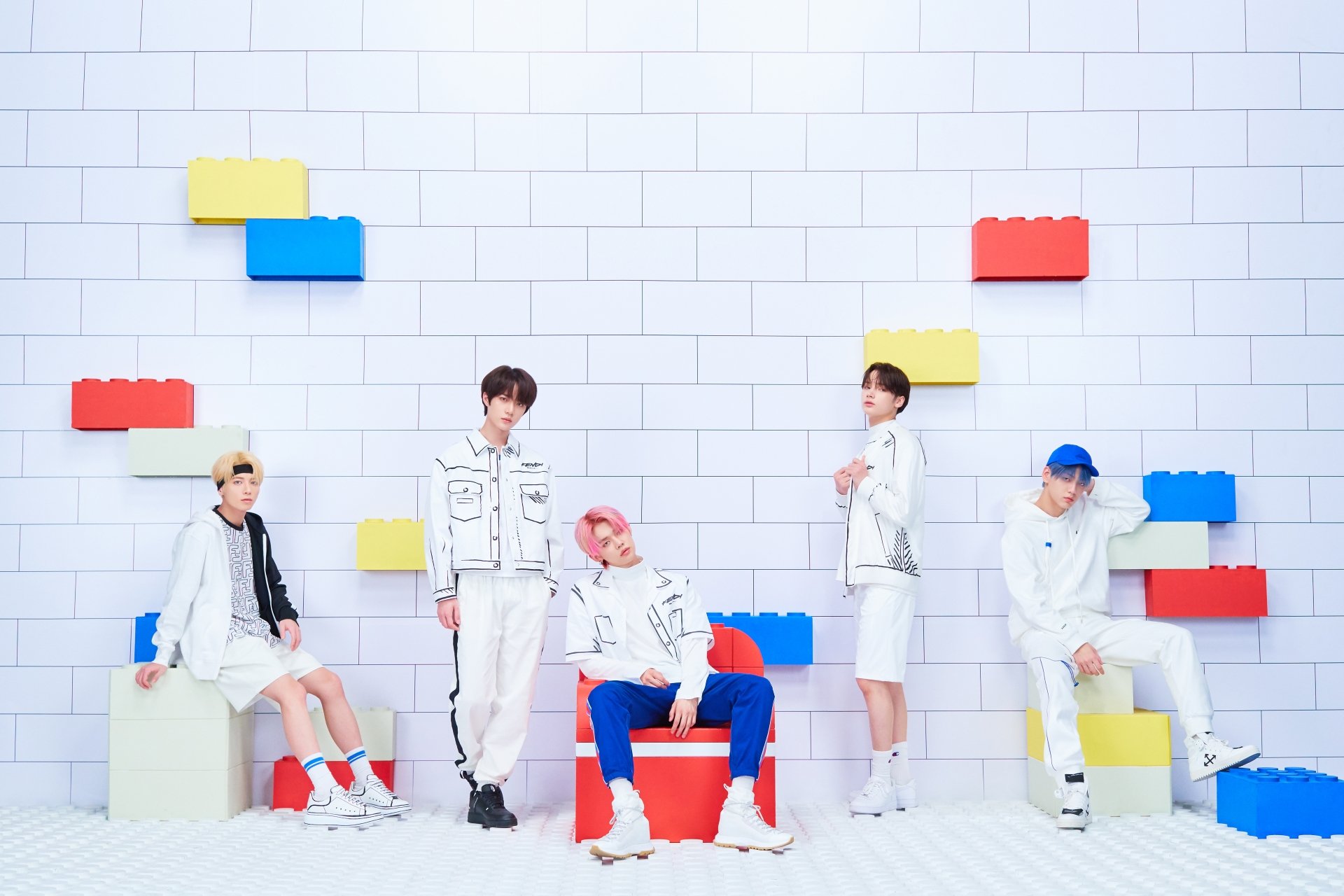 TOMORROW X TOGETHER Reflects on Milestones and Discusses Making Music

There are certain musicians whose names are synonymous with excellence, and the South Korea-based group TOMORROW X TOGETHER (also stylized as TXT) consists of five young men who have attained that rare level of notoriety. The super-rookie group was formed by the juggernaut label Big Hit Entertainment (home to the infamous BTS), and debuted in 2019 with their introductory EP The Dream Chapter: Star peaking at No. 1 on the Gaon album chart in South Korea. The EP went on to make waves in the US by then breaking into the Billboard 200 at 140 and setting an impressive debut record for male K-pop on US charts.

The immediate success of their craft rapidly launched them into an international market, later resulting in a sold-out US tour to kick off their many prestigious triumphs. Most recently, their third EP minisode1: Blue Hour charted on the Billboard 200 at No. 25, became their second No. 1 on the Billboard World Albums Chart, and is rapidly approaching a Double Platinum certification of 500,000 units on Gaon.

An extension of TOMORROW X TOGETHER’s impact as musicians can be discovered through their YouTube channel, which has currently amassed over 500 million views for their colorful visuals, distinctive choreography, and irrefutable musicality. Their art has resulted in countless awards and nominations throughout a plethora of highly coveted categories in South Korea and in the US — maintaining the outstanding reputation the label is known for. Later this month, the group will release their first Japanese album titled Still Dreaming, due to their dedicated fanbase (MOA) helping the group rightfully expand their reach through a valuable Gen Z perspective on the current state of the world to an even broader audience.

With massive hit songs like the ‘70s funk-loving “Blue Hour” and the undeniable charisma of “Drama,” TOMORROW X TOGETHER has a strong collective identity for being a relatively new act. The notion of witnessing this dedication and passion from the next generation of K-pop is imperative for future eras of young artists, and the importance of K-pop’s union with mainstream media as a whole. Considering the astonishing amount of love that the group has earned from people around the world, it feels like the TXT takeover is imminent — and we’re completely on board.

TOMORROW X TOGETHER is quickly approaching their two-year anniversary, with recent music to end 2020 and new music to start 2021, so we spoke with the group’s five members (SOOBIN, YEONJUN, BEOMGYU, TAEHYUN, and HUENINGKAI) about their creative process, celebrating remarkable achievements, and reflecting on a year that profoundly tested everyone.

I really enjoy the resurgence of disco/retro pop music, and it’s also a major theme in music worldwide — what was it like to tackle that concept with your unique TOMORROW X TOGETHER flare on minisode1 : Blue Hour?

SOOBIN: Our title track, “Blue Hour,” is a mellow yet trendy and energetic disco dance track that beautifully weaves the story of our five members together. The song has a catchy synth sound, rhythmical guitar backing, and dynamic bass line, and I think everything came together quite charmingly to create a truly captivating disco masterpiece. Our producers, Slow Rabbit and Bang Si-Hyuk (aka “hitman” bang), were also involved in its creation, so you could say “Blue Hour” is Big Hit Entertainment’s reinterpretation of the disco genre.

HUENINGKAI: “Blue Hour” is a very upbeat and joyful song, and I imagine it’s largely thanks to the vibes and overall mood of the song itself, but minisode1 : Blue Hour was a very enjoyable and incredibly fun period for us all. We’re so happy and thankful that a lot of people liked it!

I’m sure the last few months have been a busy time, with your performance and win at the MAMA Awards and new music. What has been the biggest takeaway from this era?

SOOBIN: We worked really hard preparing for our MAMA stage. And thanks to that performance and this era of our careers, I was introduced to the disco genre in a completely new and enjoyable way.

YEONJUN: Disco was a genre of music I hadn’t encountered before. So, I think the biggest takeaway for me was the sense of accomplishment when I learned and successfully executed a disco-style performance for the very first time.

BEOMGYU: The importance of practice! During this time, I once again realized how crucial continuous practice and hard work are.

TAEHYUN: I invested a lot of time and effort in practicing, and it paid off. I feel like I was able to significantly improve and grow as an artist during this era.

HUENINGKAI: Both my personal mindset and our group’s teamwork has definitely strengthened for the past few months.

You debuted just under two years ago and in that time you’ve garnered several awards, charted on the Gaon Album Chart and Billboard, and you’ve even achieved universal success around the world. Has there been one moment you could pinpoint as one of your proudest career moments so far?

SOOBIN: If I had to pinpoint one moment, it would definitely be when we got our first win on a music program.

YEONJUN: My proudest career moments so far are when I went to my first audition, and the day we debuted as TOMORROW X TOGETHER.

BEOMGYU: There are many I can think of, but I suppose one would be when we first received our Rookie of the Year award.

TAEHYUN: I feel proud each and every time we release a new album.

HUENINGKAI: When we placed 25th on the Billboard 200 Chart!

Your detailed performances have helped deliver some epic moments in music videos and performances such as your recent MAMA award for Favorite Dance Performance. Does that kind of positive reception from fans and peers fuel your work when taking on a new project?

SOOBIN: Of course! All the love and positive feedback from our MOA mean everything to us. They help us to continually strive and dream.

YEONJUN: Yes, our fans are our biggest supporters and motivators so getting that kind of positive reaction means a lot to us all.

BEOMGYU: Definitely! The positive reception from our MOA is a huge help. I’m extremely excited to show them what we have prepared for our next new project!

TAEHYUN: Absolutely! We’ll be working hard on our next project, and our MOA can definitely look forward to it.

HUENINGKAI: Yes! The support from our lovely MOA and the encouragement from our fellow members have been a huge help and motivation for me.

You have a really innate way of connecting with your fans (MOA), and the new EP was another great example of that because staying connected while apart is pretty relatable right now. Has it been helpful to craft and share music during this difficult time?

TAEHYUN: We relate so much to the difficulties we’re all facing in the current situation, so we wanted to create a song that served as a source of comfort for many people. These are hard times and we’ve lost all sense of normalcy and routine, right? “We Lost the Summer” is a direct output of thoughts and musings on how we could reflect this sense of loss and loneliness.

Our fans told us that they wholeheartedly related to and found comfort in the messages we conveyed through our EP, minisode1: Blue Hour. And we, in turn, also received comfort and positivity from sharing our music with the world.

SOOBIN, I know that you were credited on “Ghosting,” which is a solid track that introduces a catchy spin on detachment. What has been the best part about getting to work with your fellow members as songwriters?

SOOBIN: I think the best part is that I’ve been getting to know my members on a deeper level, in terms of their musical tastes and preferences. BEOMGYU and I have very similar tastes in music, so we can relate to each other and freely exchange ideas. On the other hand, YEONJUN and I have completely opposite tastes in music, so he’s been a huge help in broadening my horizons and introducing me to new genres.

HUENINGKAI, you’re a wonderful pianist, and I hope that we get a chance to see that in a song one day. If you had the opportunity to add piano to a future comeback, what genres would you like to combine it with?

TAEHYUN, you’re also credited on a few tracks, like “Ghosting” and “Wishlist,” did you have a favorite memory of bringing either of these songs to life?

TAEHYUN: To be honest, when I was working on “Ghosting,” the theme of the song changed twice and I remember having to rewrite the lyrics a few times because of that as well. “Ghosting” is a song that went through an extensive revision process, so I was ecstatic when I heard that it had finally been confirmed and selected.

YEONJUN, in these settings you can go from working together as a group to having this uniquely talented brotherhood. What has it been like for you to embark on this massive journey together?

YEONJUN: Being together with our members is always enjoyable and meaningful. Naturally, we did also run into difficulties and clash from time to time, as people often do, but we overcame them each time through candid conversations. I think our teamwork grew even stronger and we became closer to each other through these experiences.

BEOMGYU, the new EP feels like it isn’t afraid to discuss the hardships associated with life transitions. Obviously, there have been some universal hardships for us all, but what has been your favorite positive change to come out of 2020?

BEOMGYU: 2020 was undoubtedly a tough year for everyone. But, I was able to find some positivity and comfort from sharing “Maze in the Mirror,” a song I first wrote when I was still a trainee with the world.