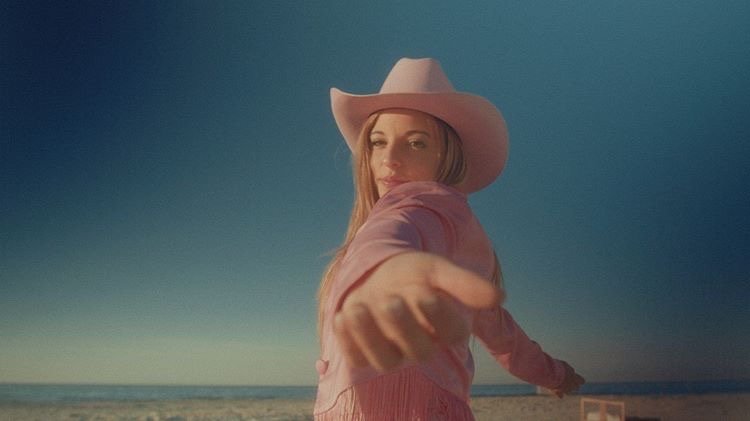 Jazzy singer-songwriter Olivia Morreale just dropped a new single “NO ANSWER,” and it is the perfect drive to the beach for inspiration kind of soundtrack you’ve been longing for. And yes, that’s basically what the song was inspired by — a cruise down PCH, following the sun’s glittery path along the ocean. Morreale is a musician filled with inspirations to pull from, all the way from jam seshes in the historic clubs of NYC to Frank Sinatra records playing in her Italian-American household. She has a lot to say and the tool of music to share it with us.

We got to talk to the LA-based synthy indie pop goddess about studying jazz, hailing from New York, and writing her new single.

What’s up, girl? How is LA treating you? Do you miss New York City?

Hello! Wow yes, really miss the city. LA is great, though! I’ve been to Santa Monica almost every other day to watch the sunset this past week — sitting on the beach in January is definitely something you can only do here, so that’s been lovely.

I know you studied jazz in school. Tell me about what you love about it. What are your favorite jazz standards? Does it influence your music you make now?

Yes! I grew up listening to big band records with my mom and Frank Sinatra with my dad and the Italian-American side of my family, so I was introduced to tons of great singers and standards pretty early on. The phrasing that jazz singers use has always come into my sound and delivery — it’s really hard for me to sing a verse or chorus the same way twice without changing the phrasing a little. I remember I used to really like Sinatra and Ella Fitzgerald’s earlier records, the ones where the recording quality is pretty bad and they’re singing more obscure songs that are definitely “singer tunes;” there are some really intricate melodies and lyrics in those early recordings that aren’t in the basic rotation of jazz tunes that are played nowadays, and the phrasing is always so effortlessly conversational, which I really love.

When I was in high school in New York, I started going to jazz jam sessions in the city — don’t ask me how I got in — but that’s where I learned how collaborative jazz is. It’s still really hard for me to wrap my head around an artist releasing music and putting just their name on it, because even in pop music it takes so many people to create a single song and to make it into the most beautiful version of itself. Jazz does this to the extreme in a live setting — there can be a leader, but in improvisational music, it’s imperative that each voice is heard. I love that each contribution is equally important to the song as a whole, and that’s how I feel about all of the music I make. I couldn’t imagine making anything from start to finish alone in my room — for me collaborators are an absolute necessity.

Some of my favorite standards are “Autumn in New York,” “I Only Have Eyes For You,” “I’ll Be Seeing You,” “Save Your Love For Me.”

What sparked the idea for your single “NO ANSWER?” What was the process like writing it?

The lyrics came during a very specific moment: I was driving down the Pacific Coast Highway past Malibu around sunset and the ocean was looking so glittery, it was like a mirror reflecting the sky. So that was the one lyric line I brought into my session with my friend Eli (who co-wrote and co-produced this whole EP) that next week. He had just gotten a new synth and we were messing around with it and found that fat synth you hear throughout the whole song, and the vibe just fit so nicely.

This writing process was a lot different from how I usually write, whether I’m writing by myself or in a co-write — the lyrics don’t necessarily make a ton of sense, which I’m usually a huge stickler about. But it’s more about the feeling and capturing the vibe. We wanted it to feel like a good dream, where things just kind of happen and float by you but the feeling remains constant. Even if you forget what events happened in the dream, you wake up still in the haze of feeling that you were wrapped up in during the dream.

What’s your favorite thing about being a musician? What’s the hardest part about it?

I feel really fortunate to have gone to music school at USC — the jazz and pop communities there and the city of Los Angeles really formed me as a musician and taught me a lot about what I value in music. I had initially planned to sing classical music at Manhattan School of Music, but plans changed. Ending up in LA was such a blessing in disguise. I don’t think I would have felt as fulfilled singing arias and auditioning for opera jobs. There are so many ways to feel fulfilled as a musician and artist, and contemporary styles of music definitely lend themselves more readily to that concept than the classical music community (although there are some very innovative things happening there too!). At USC I formed an all-girl rock band with some of my friends and learned how to play at house parties and book shows while also playing jazz gigs and learning about that world. That’s definitely my favorite thing about music: there is no one set path for success and there is always more to learn and new things to try. I love that I’ll never retire because music isn’t something you can retire from really.

I actually think that that’s also the hardest thing — there is no one set path, and you have to pay the bills while putting in your all at the same time. Over the course of my still very short career that still I feel like is just beginning, I’ve gone through lots of attempts at creating art and presenting it to the world, and I feel like it’s been so much trial and error, which can be really emotionally taxing. For a while I thought I wanted to be mainly a session singer, so I was presenting myself to the world that way. I booked a tour on background vocals and am learning how to operate in that world, but I’ve realized it’s only one of the many things I want to do with music, so effectively conveying that to my community is something I’m still figuring out how to do. I also renamed my artist project Foxie for a little while and then decided that that was dumb and had to change my mind in front of the following I had built and leave some of the music I had made behind because I knew it wasn’t authentic.

All that to say I think the constant identity crises are definitely challenging, and the upfront investments in time, energy, and money can sometimes feel like very difficult risks to take. I’ve really been working on changing my mentality about that and putting ego aside — if you don’t try you really will not know what works and what doesn’t, so after a certain point of research and weighing your options, it’s necessary to just take the jump and see where you land.

What inspires you nowadays? What have you been listening to? Watching?

I’ve definitely been in a whirlwind preparing for this release, so a lot of what’s been inspiring me has been following other artists and musicians in my community and seeing the way that they interact with the world and how they choose to release music, especially during a time where we can’t play live shows or really travel or tour. I also have a close group of friends who have all been working on production and making beats and sending them to each other for feedback — it’s scary to show your initial work to other people, so I value that circle a lot.

My friend Kate Grahn has been on fire with her releases, and I really admire her work ethic and her ability to speak on issues she is passionate about alongside promoting her releases. Another artist I love is Maisyn (Jessi Mason) — definitely one of the best songwriters I know, and her work always reminds me of the importance of writing the best song you can write and putting your best foot forward before doing anything else. Sophie Gragg, who runs the Luna Collective Magazine, is the same way — none of the hype matters if the quality isn’t there.

I feel lucky to be surrounded by lots of individuals who keep the bar high — my boyfriend Andy is a great bass player and interacts instinctively with music in that way, too. Quality control is everything. It sounds so intuitive but I feel like that’s something that can get lost a lot nowadays if you’re paying attention to the wrong things, so it’s important to be around people who monitor it closely. I also really love Mia Gladstone — she’s great at releasing art and interacting with the world in an authentic way, and having the confidence to grow with her fans and to put her trial and error on display in a beautiful and positive way. Disco Shrine is another artist whose aesthetic I really admire.

Aside from other artists I’ve been checking out, I also have a Zoom book club that keeps me nicely tied to my last few threads of sanity. We just read the Five Love Languages, which was a hilarious choice but also led to a lot of thought-provoking discussion about how people interact in the world. We switch off reading novels and non-fiction — And Then There Were None by Agatha Christie and Shanghai Girls by Lisa See have been some of my other favorites so far.

If your music could be the soundtrack to any movie or TV show, which would it be?

GLOW. Probably not in an Alison Brie scene, but maybe a long shot of Kate Nash driving off into the distance at sunset or something. Would love that.

Australia, London, or Japan. My three favorite genres are really thriving in those parts of the world — the pop music coming out of Australia and New Zealand right now is so awesome, the London R&B scene is sick, and I would love to experience the jazz scene in Japan.