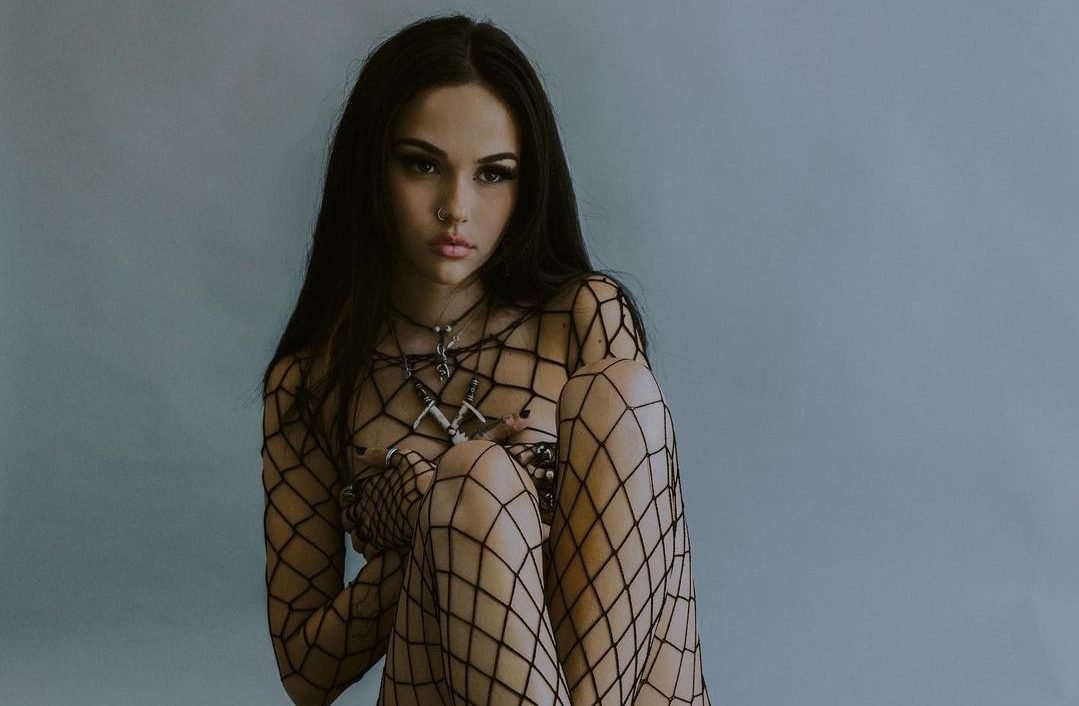 Alt-rock/pop singer Maggie Lindemann hopes that people who listen to her music feel a connection with her and her experiences. Channeling her unease and anxiety into creativity on her long-awaited debut EP Paranoia, Lindemann draws from the genuine struggles of her life and sprinkles it with wit and style to deliver relatable messages enveloped by catchy music.

Exploring everything from the anxiety-inducing feeling of being watched on “Knife Under My Pillow,” to the burden of never fitting in on “Different,” Lindemann, who sees music as her escape, uses the eight-track EP as a crutch to work through the swirling vortex of thoughts in her mind. Where music is her beloved happy place, the singer is also is on the precipice of delving into another one of long-time passions with her acting debut on the horizon.

Speaking to EUPHORIA., she delves into the inspiration behind Paranoia and the theme of the “Knife Under My Pillow,” visuals, reveals her interest in sewing and gaming, explores how music helps her work through her anxieties, and much more.

I first started writing this EP when I was just experiencing so many different aspects of paranoia. I was living in this house that freaked me out and I just constantly thought someone was breaking in for some reason though there was nothing. I also experienced like this really scary moment that happened when I was like overseas and that really triggered a lot of really bad paranoia that became this recurring thing that just kept happening in my life. I called this Paranoia because every song on it has this narrative that stems from my paranoia.

The video for the single “Knife Under My Pillow” has this early 2000s scary movie vibe. What made you want to go with that kind of vibe?

I love scary movies and especially love the parody Scary Movie franchise. They’re so funny but also like kind of scary in a comedic way.  So I kind of wanted to do something that felt a little bit “jokes.” The early 2000s influence is also present in my hair with the mullet and spikes as well as the makeup. The video is just me walking around this house like looking for someone that’s not there. But I can keep seeing this shadow that’s not there, it’s just me going crazy. Then it cuts to a performance, which is kind of a dream sequence indicating what I want to really be doing. I wanted to bring this chill vibe that still had elements of the paranoia within me.

What’s your personal favorite track on the EP?

I feel like I connect with most is probably “Different.” I just always felt like those lyrics have been me for so long. I mean all the other lyrics on Paranoia are more in the moment. A lot of those feelings are maybe gone or not as a prominent. But “Different” is definitely the one that I feel like I’ve just related to the most for the longest time.

You’ve moved houses, so has the paranoia you’d been experiencing gone away a little or has getting stuck at home over lockdown made things difficult?

Moving has definitely helped a lot with the paranoia. I started writing this EP in June-July 2019, so much before the pandemic while I was still at the old house and I don’t really feel paranoia in my apartment now. So that aspect of paranoia has ebbed, however, I’m constantly anxious about other things. I always wonder “is my boyfriend going to leave me?,” “is everyone going to hate me suddenly?” and writing about it helps me deal with it better; putting it out into words and putting music to it.

Would you say music is an escape for you?

Yeah, definitely. I think it helps a lot. It’s like a therapy session. In therapy when you have to talk about something that’s hard for you, you are dreading it because you don’t want to bring up that emotion. But at the end of the session, I feel relieved because instead of ignoring it and pushing it to the back my mind, I’ve addressed it and spoken about it. It’s uncomfortable but it helps.

In terms of your sound, how would you say you’ve evolved? And looking ahead, what do you see as the ideal direction for your career?

My sound has changed as I’ve gotten older – I’ve found myself, and don’t feel so uncomfortable in my own skin anymore. Now I just feel like I’m really myself and I’m doing what I want. For the future, I’d say I just don’t want to be doing the same thing over and over again. I also hope that over time I can reach more people with my music. Something else I really want to do is open up a store of my own.

When you talk about your songwriting, where would you say you draw your inspiration from? Does it tend to come from personal stories or do you tend to draw from your surroundings?

It’s usually my own stories. I do write about someone else’s experience, but I then make it my own. I feel like I don’t do that much because it feels very performative and like I’m detached from it. I like writing about my own experiences and stuff that’s going on in my own life because then it’s  more emotional when I’m performing and I just feel more connected to it.

What would you say is the weirdest or oddest thing you’ve ever been inspired by?

What’s one message you hope listeners take away from your music?

I just want for people to feel like they like know me more personally. When I listen to someone I want to feel like I know them, so I hope people have that kind of connection with me and feel like they can relate to me through my music.

Moving from music into your other passions, you are making your debut as an actor on Downfalls High later this year. Is acting something you’ve always been keen on? What’s something else you’re keen to try out professionally that you haven’t yet?

When I was younger I’d attend an acting class and used to  go to auditions and stuff. I really wanted to act, but then music happened and I love music. But yeah, I’ve always wanted to act and I’m really excited for the film to come out. Other than that, I’m actually really about sewing so I’d love to design clothes and have my own little boutique someday.

What’s been the most surreal moment of your career so far? What’s something on your bucket list?

One of the most memorable moment was when I did the show in Norway and my mic stopped working in the beginning right when the music started. I was singing in front of 70,000 people and I was panicking because my mic wasn’t working, and then I could just hear everyone in the audience, like, screaming the lyrics and that was like the most heart-warming, craziest moment. To know that so many people in like one spot knew who I was, knew that song and the words and they were singing it for me was just so amazing. My own tour where I’m headlining is definitely what I want to do. I also want to act more. And something totally out there that I want to do that I know will never happen is shadow a detective and see how they work because I’m so interested in crime.

Finally, what’s one question no one has asked you in an interview that you wish they had?

No one ever asks me about my gaming; video games are my guilty pleasure. I’ve been really playing video games more than ever these days. I got a monitor, which is really cool. My next thing I want is to get a PC, but I got a monitor so now I don’t have to play so far away, like on my couch playing on my TV because it’s like so far. I can’t see that far. So now I play on my desk. I got the new Cyber Punk game, so it’s going great!