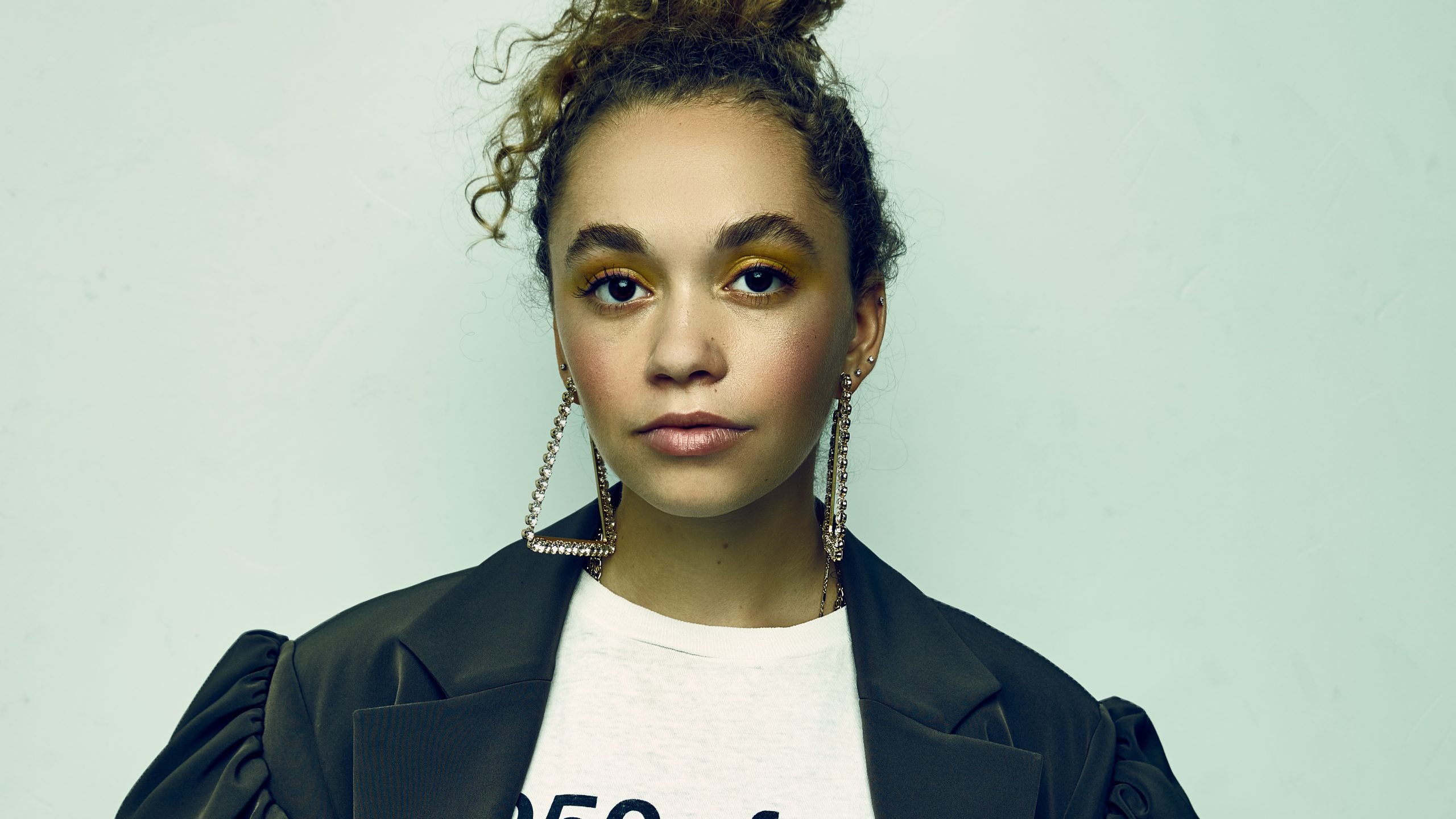 If you saw the modern take on a traditional fairy tale movie Godmothered on Disney+ then you already know Jillian Shea Spaeder is one to watch. The multihyphenate actor/singer/activist has been on the rise since she started posting her own singing videos to her YouTube channel when she was still a preteen. Armed with just her guitar or ukulele, she performed covers of all her favorite artists’ songs, including Shawn Mendes and Ed Sheeran. While singing is her first love, acting quickly came soon after and she found a home in series like OMG!  and Disney’s Walk the Prank.

Godmothered is Spaeder’s first major movie role (she stars alongside Isla Fisher and Jillian Bell), and one she was over the moon to get. Not only was she able to flex her acting chops, but she got to marry both her loves together and bring her music to the screen as well. She performs not just one, but two songs in the film, “Rise Up” and “Hero,” providing a stunning sense of showmanship for viewers. At just 18 years old, Spaeder is a force to be reckoned with, from her raw talent to her eloquence and intelligence, something I got to chat with her about over Zoom — amid a snowstorm, no less — just after Godmothered hit Disney+. Keep reading to hear everything she had to say about the film, her music, and her own happily ever after.

I would love to just hear how you got started in music and your path to where you are now.

As a child grew up in a very musical household. My mom sings, my dad plays piano. They were in a band, that’s how they met. Like, very musical household, and I actually went to LA to go to a singing competition when I was 11 and that’s how I ended up acting. So music definitely came first for me and I’ve continued working on music in between little breaks I’ve had with acting. But it’s definitely my first love for sure.

I went all the way back through your YouTube, which was a fun little life story for you, and I love that when you’re a teenager, you can see the difference so drastically over just a few years.

That’s the biggest compliment because those videos when I’m like 10, I’m like “Ew embarrassing.” So I’m glad you think they’re different.

I’m always so impressed with anyone who can exude that much talent at such a young age.

That’s so sweet. Thank you, making my whole day.

What were some of your favorite covers you did?

Oh my gosh. My favorites as a child were probably Sabrina Carpenter and Ed Sheeran and a lot of Shawn Mendes. I remember my mom being like “Jill, you have to learn a song that isn’t by Shawn Mendes.” And I was like, “Mom, why? Shawn’s hip, he’s cool.” And she was like, “Yeah but you need something else as well.” And I was like, “OK, fine. Only Ed Sheeran.” And then that was the same too. So I go through these phases that were very strict.

Have you been writing this whole time as you’ve been doing music or did the writing come later?

I believe I wrote two songs when I was probably like 10 and I feel like when I was 8, I would run around and sing Hannah Montana songs and pretend I wrote them and change a few lyrics and be like, this is my original song, but I’d never actually started songwriting consistently until I was probably like 14, like a bit later, but I wrote a few when I was young, but they were terrible.

So in Godmothered, your character has a little bit of stage fright. Is that something that you ever deal with in real life?

When I was super young, when I was, like, 6 to 10, I feel like I had bad stage fright. I just didn’t want to sing. I got embarrassed and freaked out and for good reason, I was terrible. I just got very nervous and then I don’t know what happened, but I think it clicked and I wasn’t nervous anymore, but I feel like everyone gets nervous for a little bit. When you first step on a stage, you’re like, “Ooh, I’m nervous.” And then after five minutes, it cools down and you’re in the moment, but I think everybody has a bit of stage fright.

Do you have any pre-performance rituals or habits or ways you psych yourself up?

Oh my gosh, no. I have a terrible habit of not warming up my voice, which my sweet voice teacher is getting me out of right now. My habit is sitting on my phone and I just play my guitar all the time. If I’m bored, I’m playing my guitar. If I’m waiting somewhere I play my guitar, I’m just always doing that.

Godmothered is such a good group of females, which I love. What was it like being on that set?

It was awesome. And the things people don’t realize unless they look into it as we had a female director, female writers, female producers. The percentage of women was the same on camera as off, which was really cool to be around. I’ve been fortunate. I remember when I was 12 being like, I’ve never had a female director, that’s really sad. And my last three projects have had female directors, which has been really cool. It’s such a happy work environment. And it was so wonderful and all of us were just uplifting each other and it was so sweet and nice and everyone was so pleasant.

It’s cool being able to see somebody like me doing what I want to do, which is something when I was younger, I didn’t get to see very often.

I also love that the movie is not your typical happily ever after. I think the coolest part is just the story. What were your thoughts on the story when you first signed on?

The message is obviously the coolest part of the whole thing, because we’ve grown up with these fairy tales that we love so dearly with happily ever after, as a prince and a gown and a castle. And this kind of says, you don’t have to have that. You can have your sister, you can have a puppy. You can live by yourself in an apartment in the city and go explore every day. You don’t need to have this stereotypical life to be happy. And I think that this kind of takes the fairy tale we know and love and makes it more modern and more inclusive.

You don’t have to be a little girl waiting for a prince to come save you. You can get a princess, you can just hang with your puppy, who cares? You’re good. And don’t freak out about having a prince and a gown. I think that’s why it excited me a lot when I read it.

Do you remember when you got the role?

I remember posting it on Instagram and being like, I want to tell everyone so bad, but I can’t. So I just posted a picture and I was like, “Do you like my socks?” To like distract myself for a minute. But I actually was flying home to Philly for Christmas and I flew home the night before. And apparently my manager knew I booked it when I was on the plane, but I got home at like 10 at night. I was in my brother’s room and we both fell asleep but I woke up to my mom coming in. I was like, “Why are you waking me up?” And she was like, “You booked Godmothered.” I was running around so excited and I called all my friends and none of them answered and then I was like, “OK, wow this was underwhelming.” So it was a fun day.

What would you say your version of happily ever after is?

Do you have names picked out for your future Pomeranian?

I want a female Pomeranian named Stevie because of Schitt’s Creek but also Stevie Nicks.

I know you have an album coming. What can you share about your album?

It is half singles that I’ve released over quarantine and then a couple of new ones. I’m excited for it. It’ll be fun. We’re still putting together a couple of songs for it because I wanted it to be new because I have a lot of music from like two years ago, and I don’t want to release stuff from a few years ago. I want it to be fresh. So we’re still putting it together, if not in January, which will be really new and fun. And I also get over my music after like a year. So I’m glad it’s going to be new so I’ll still like it when it comes out, which will be fun for me.

It’s kind of a mix of everything. There’s a couple of ballads, a couple more upbeat. Some singer songwriter type songs.

Is there anything else you’re working on or want to share?

Working on waiting for a COVID vaccine so I can get another job! Whatever we can do to stop this pandemic. Oh, and wear a mask.