girlfriends has over 280,000 monthly Spotify listeners just months after their debut album released in October, so it’s hard to believe that the band was nameless a year ago. Travis Mills, one-half of the pop-punk duo, jotted down potential band names in his iPhone notes on the way to meet Nick Gross, girlfriends’ other half, in the studio for the very first time. It stuck instantly, becoming the first piece of an ever-expanding (and, thus far, successful) formula to creating what girlfriends is now.

Mills and Gross have been connected for half a decade, but it was a reminiscent Instagram story post from Gross that brought the two back together in late 2019. Gross’s message was simple: “I miss touring.” The post, though pre-pandemic, became a feeling shared practically universally among musicians just months later; little did Mills and Gross know, their first major collaborative venture would find its foundation during a tumultuous time for artists.

“I was like, ‘Yo, dude, I saw your post. I feel the same way.’ And I hadn’t put out any music in about three years at that point,” Mills told EUPHORIA. “I was like, ‘I want to do something, but I want it to be different. What do you think about starting a band?’ And he was really into it. We talked a lot about the dynamics and how we wanted it to be, and we wanted to keep it kind of contained to us two.”

Ignited by that shared sentiment, the duo’s new venture was initially rooted in Mills’s desire to take on his first project since his solo work years prior. His outreach resulted in pop-punk duo girlfriends, one of the latest groups to rise in the modern revival of the nostalgic genre.

And the two pulled it off in just months. Mills said the project wasn’t born in quarantine, but the timeline was just as sudden; their debut album was released just 10 months from the first studio session, creating a bold beginning to their tenure as a pair in the span of January to October.

“Most bands are a band for years before they make an album and put it out into the world, and Nick and I kind of had to fast-track everything,” Mills said. “We were able to do that in a few months. So, it gave us a lot of time to spend together and really kind of hone in on what we wanted to do without a lot of distractions that come from ‘normal’ life.”

But Mills and Gross didn’t do it entirely on their own. They brought in longtime creative collaborator and pop-punk veteran John Feldman into the mix, moving into his house for two months to put together the collection of tracks, from “Where Were You” to singles “California” and “Eyes Wide Shut,” that would make up their self-titled album.

Without the restraint of in-person commitments, like meetings and photoshoots, Mills and Gross were able to devote themselves almost entirely to the creation of the project. This also created room for some memorable collaborations on the album, including features by DeathByRomy and Travis Barker on some of girlfriends’ standout tracks. 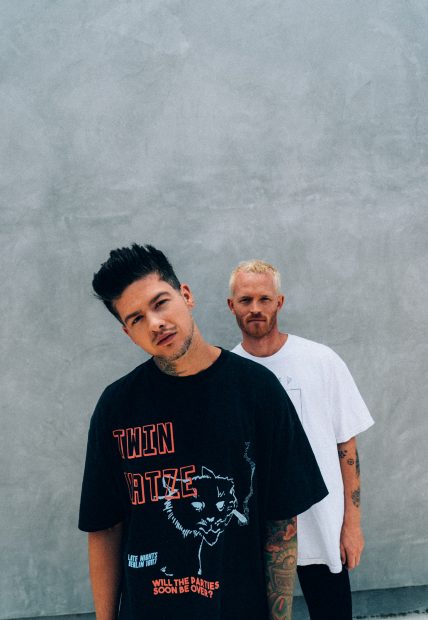 This creation process is also the key to Gross’s career in music, the thing that keeps him grounded in every new project he takes on. Likewise, girlfriends is no exception.

“For me, the number one thing is the music creation,” Gross said. “For me, it is the drumming; the actual, physical act of playing music. Since I was 6 years old, that’s where all the things that I do in my life really stem from. That’s never left.”

With plenty of time to create also came plenty of cohesion in the sound of their debut project, but Mills and Gross didn’t walk into the room with that feeling defined. Mills believes that unknowing is the point of creating music, though; you walk into the studio with effectively nothing, and they walk out with something fresh, new, and uniquely girlfriends.

This first project was formulated with the “golden years” of Mills’s and Gross’s musical foundations in mind, largely shaping the dive into the pop-punk genre that defines the first sounds of girlfriends. More than anything, the musical inspiration comes from their roots; the music that shaped the two as people and musicians while reminding them why they fell in love with making music long ago.

The debut also features raw lyrics that generate a depth of emotion unique to the pop-punk genre; fans can thank Mills for the relatability and emotive nature of the words, as he explained that the stories on the album are all built around very real moments.

Mills said the two wrote “Farewell” first, which came together when he stopped trying to find the perfect melody and started emoting instead. From there, the process was more free-flowing; once Mills let go of expectations, he was able to dive into the reality of the stories he was writing about to create a cohesive emotional experience for his and Gross’s project.

And, while every song shares a different experience, Mills said two stand out as particularly special: “Right Place Wrong Time” and “We’re All Fucked Up.” The titles seem to tell stories on their own but, for Mills, the tracks are visual experiences. In some ways, it’s like looking into a mirror.

“[‘Right Place Wrong Time’], it’s such a visual song for me where I literally can see myself in bed, drinking coffee, smoking cigarettes, fucking just bummed and depressed,” Mills said. “And I can see myself walking around at three in the morning, not knowing what the fuck to do.”

Similarly, “We’re All Fucked Up” feels like a reflection of who Mills is from his own point of view. Though it is a rather universally relatable song, as the title suggests, it chronicles the hot and cold feelings of living; the song showcases the highs and lows of being a “contradiction of a person.”

Mills poured everything he had into the writing of this first collection of stories. So much so, in fact, that he now recognizes that same emotive process won’t be the same for album number two.

“It’s cathartic. I mean, I think that’s what scares me, if I’m being honest, about going into the second [album], because I don’t feel like that anymore,” Mills said.

But the ripple effect of Mills’s storytelling paired with the sonic expertise of Gross has certainly made waves among the band’s fanbase. Messages like, “This song helped me through my depression,” and “I wanted to give up, but I put this record on and it’s given me the strength to keep going,” according to Mills, is a reflection of the duo’s ability to turn the raw, painful emotion of those stories into something positive, growth-inducing, and heartfelt.

And it is those same fans that propelled Gross and Mills to get just as creative in the presentation of the emotional and sonically powerful album. Gross explained that the two are typically on the hunt for ways they can bolster their creativity, so when the challenge arose to find a way to give the live experience without the physical concert attendance, Gross wanted to adapt.

“You can’t go tour, you can’t play live, so everyone’s kind of in the same boat in that regard,” Gross said. “I feel like now you’re just starting to see more and more ways of how artists are trying to launch projects in this whole digital world in different ways. Travis and I have done a lot of thinking on that.”

And the product of that brainstorm was girlfriends’ Livestream at the Roxy event on Dec. 8. The venue was the first that Gross ever played as an artist, making it both an exciting new venture into the digital world and a nostalgic one for the music itself.

Mills wanted girlfriends’ first show to be live in the literal sense, so he credits Gross with finding a way to make an engaging performance without having fans at the Roxy. And Gross concurs that performing for the very few people on the crew that day is a “weird vibe,” but the opportunity to record their debut live for the first time was enthralling nonetheless.

It was intimate, clearly, but it marks only the first step in a promising future that includes live shows (pending the state of the COVID-19 world follows suit). The idea, Mills explained, was to make the most out of the year the duo was handed; fortunately, their livestream sold out with over 500 tickets purchased, so fans seemed to believe it was worth the wait.

And though 2020 was already eventful as-is, both Mills and Gross are invested in the next era of girlfriends beyond the nostalgic roots of their first album. Gross explained that discovering their evolved sound is about growth; though they are still buzzing from the first album, they can’t wait to figure out the sonic path of their next body of work.

As for what that phase sounds like? The duo isn’t sure, but they are already deep into searching for inspiration. Perhaps it will be a collection of styles or a genre-bending take on pop-punk that shapes the future of girlfriends, but right now is about Mills and Gross playing it by ear — literally.

“We went back to the drawing board, and Travis is just starting to play a lot of his inspirations and just different ideas around how things can sound in different styles,” Gross said. “[We] just always get to listen to stuff that we’re inspired by in the moment and then see how we can kind of do our own version of the things that we’re inspired by.”

Regardless of what comes next, fans can be assured that it is a sound, joint effort. girlfriends exists because of the duo’s strength in relatively seamless creative collaboration, a trait that developed strong roots for a pair that quickly became artists to watch in the new year.

“When I’ve been in bands, there’s always one person that is extremely passionate, is kind of steering the ship,” Mills said. “Everyone else kind of has different agendas, so for Nick and I to be on the same page and want the same things, it’s the foundation. It’s why we started this.”