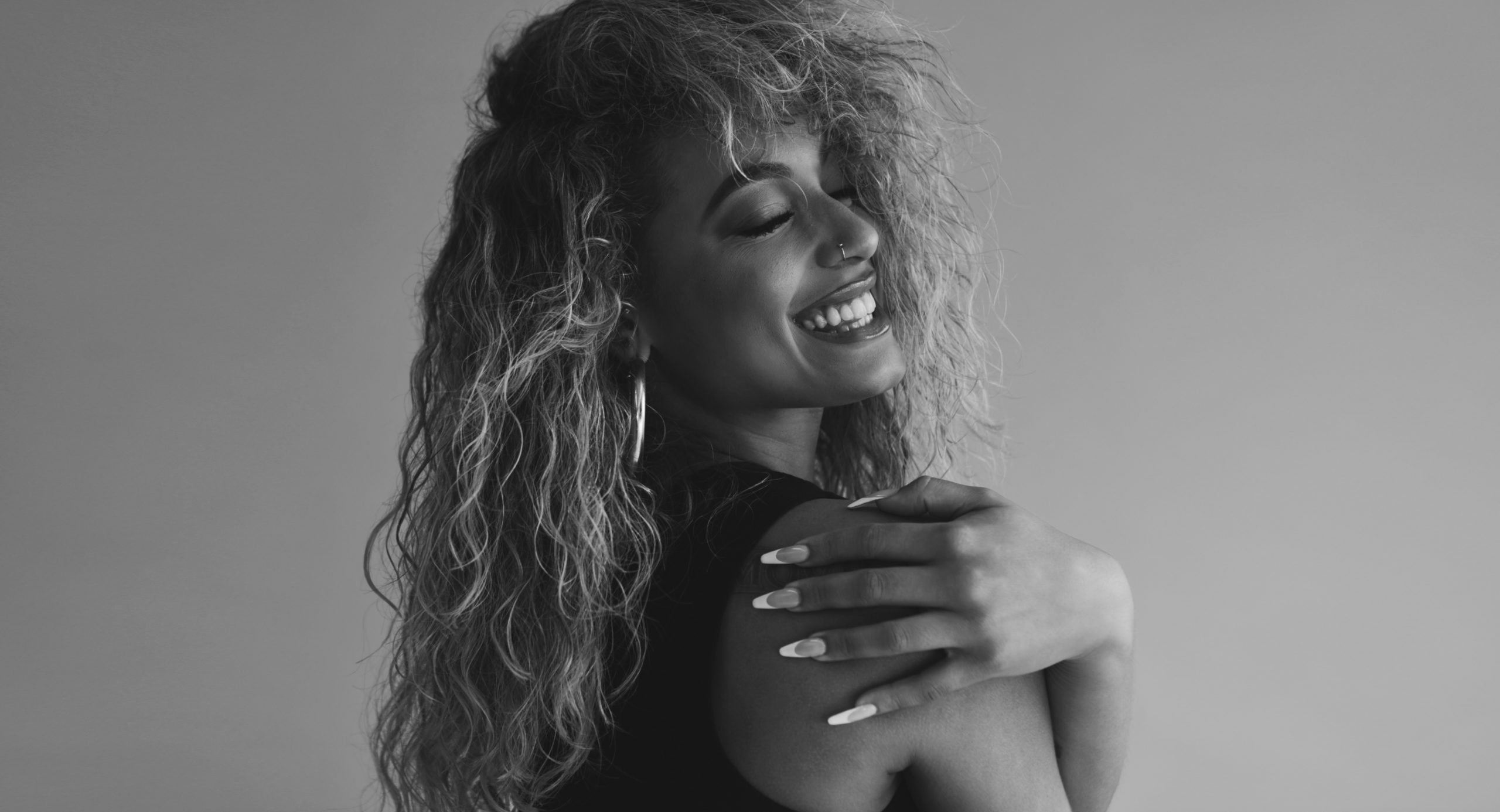 Less than an hour after I spoke with DaniLeigh, I checked Instagram and saw she had posted a picture with rapper DaBaby hugging him from behind accompanied by a cryptic yet seemingly straightforward caption, “My baby ❤️ idc.” This could only beg the question if he was who she sang about on the opening track of her recent album Movie.

The album was initially supposed to be titled Loved a Liar when it was going to be released in March 2020 before the pandemic. DaniLeigh has previously spoken about how the album was going to tell the story of an old relationship and its downfall. However, with a new extended amount of time on lockdown, the project took a new form entirely. She told me she had about 50-60 songs she made for the album and just picked the best ones, meaning some carried over from the previous set while some more recently created tracks were also mixed in.

Yet, DaniLeigh did not abandon her original intention to sonically and lyrically express a narrative. Rather than make the project a full mirror of one specific relationship, it seems she’s combined various experiences expressed through songs and formed a much more riveting storyline. In the spirit of the medium of film, DaniLeigh created a Movie that’s based on a true story but pulls from an assortment of ordeals to create a semi-fictional plot arc that has the driving intention of being more compelling than accurately sequential. 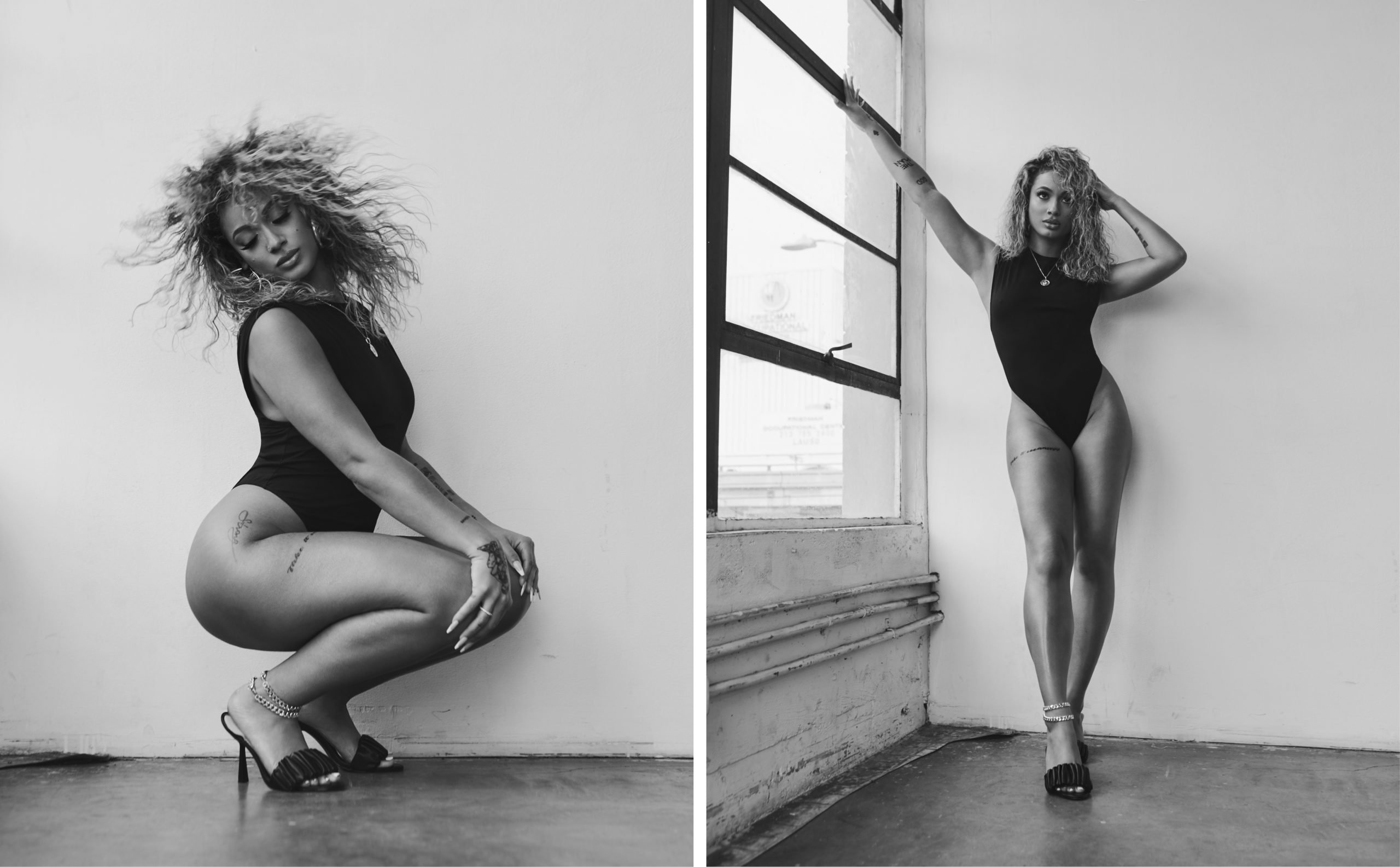 DaniLeigh is what you could call a triple threat storyteller. Her dancing and social media affinity have gained her as much attention as her music. So to do a short film to accompany Movie seems not only natural but what someone with her ability should do. The result is an epic half-hour visual composition that has all the elements of a crafted piece eligible for film festivals while also including craveable melodies and captivating choreography. She and her production team do an incredible job of straddling the line between film, music video, and social-media-influenced shot sequences. DaniLeigh, over the span of her career, has run Prince’s Instagram account, toured as a backup dancer around the world, and made two full albums and one EP of music. So the visual for Movie feels like an accurate culmination of what she’s been working towards.

I caught up with the multi-talented queen of artistic multitasking over Zoom, and we discussed everything from where I first heard her breakout hit “Lil Bebe” to her musical and personal growth from project to project. Check out our conversation below, slightly edited for content and clarity.

My intro to your music was when I heard “Lil Bebe” at a rooftop party in Brooklyn. These girls grabbed the aux cord and bumped it three times in a row while singing all the words and dancing. What was the real impact of that song for you?
Eyyyy they were vibing! That was my first hit song, ya know. It was definitely a moment for me. It was actually right after the “In My Feelings” dance challenge. That went viral, and then I dropped [“Lil Bebe”] like a week later, and it just kept going. I definitely felt the internet go up and then saw people react to it. Then we came with the remix with Lil Baby, and it was outta here.

The girls at that party were Dominican and from uptown. Did you feel like that song really connected with the Dominican community in New York?
Oh yeah! The majority of my fans are actually from New York. My parents are from New York too. Everybody be thinking I’m from New York. Us Dominicans, we rep hard for our people. It’s love for sure.

So let’s get into this album. I was really impressed with the sequencing and storytelling arc, not just lyrically but sonically. Was that important to you, and do you feel like you get enough credit for stuff like that?
As far as credit, I mean…in due time, people gon’ catch on. As far as the track listing, yeah, I really wanted this album to be like that. I started it off with the main song “Superstar” to control the narrative. Then it went off into this whole roller coaster of feelings and emotions. It just so happened I wrote out my track list then wrote out a whole script for it. It made the story, a Movie.

It was supposed to come out in March 2020, yeah? Was that a blessing in disguise that it got pushed back, and did you shoot all the visuals during the pandemic?
I did. I filmed all the visuals, and it was a blessing ‘cuz I had time. When the lockdown was happening, I was like, “alright, what am I doing?” People could just sit down and do nothing, but nah I had my album coming out. So I was like, “what can I do to really roll this out?” I always wanted to do a visual album, so…I did it. 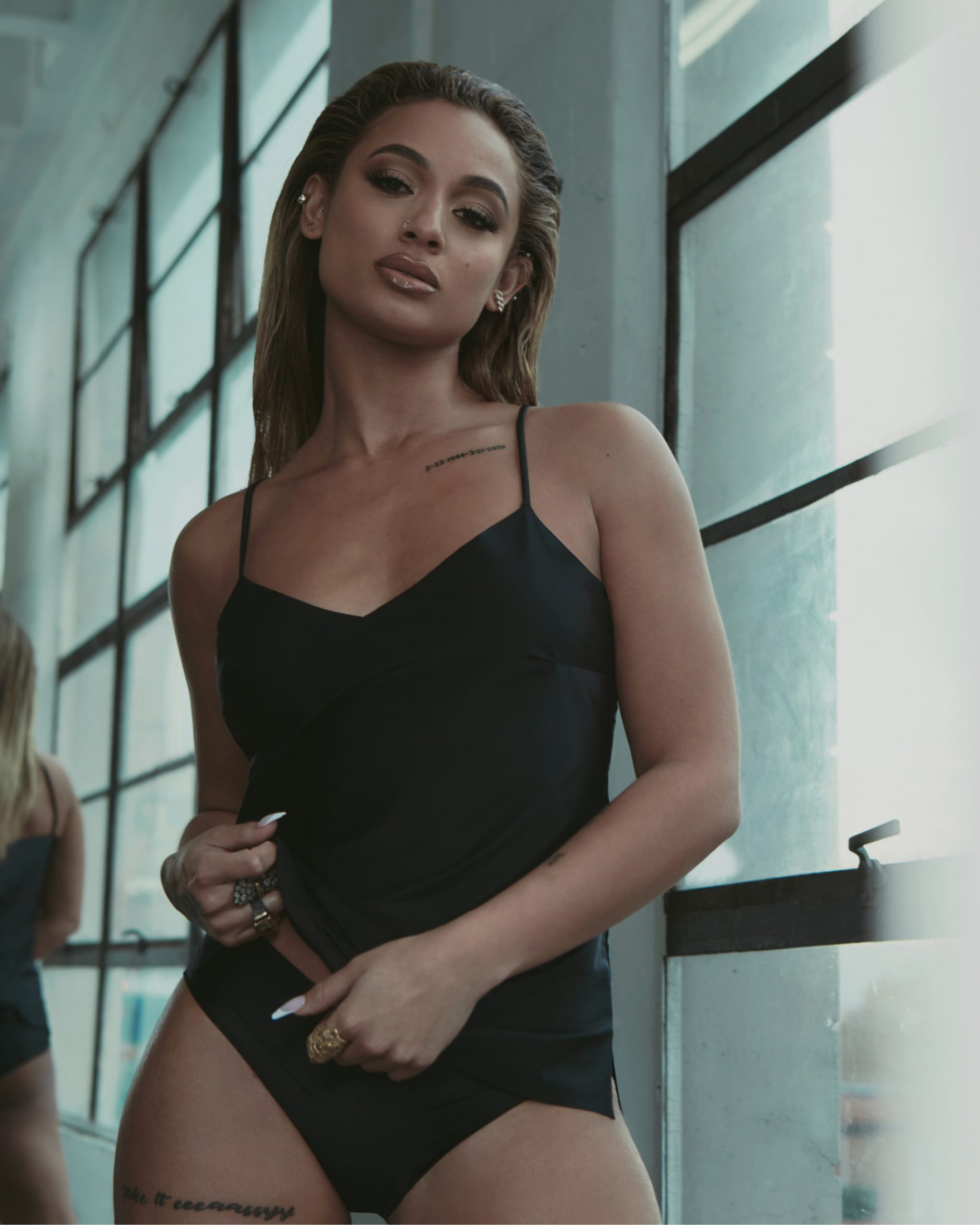 How much of a directing role did you take? I specifically liked the sequence in “Bullshit” when you throw his shirt off the balcony into the pool, and it switches to a sort of selfie stick angle.
It was all collaborative. That specifically was my boy Romeo. He was like, “I have a GoPro, just stick it in the shirt and throw it so you can see it go [in the pool].” Everybody was super creative. As far as everything, it was something we sat down and wrote out, as far as using IG Live, the transitions, and using the split-screen for Partynextdoor. We came up with everything together.

So about that Partynextdoor section, bear with me on this question. I know you recently worked with Yung Bleu, but on his remix for “You’re Mines Still” featuring Drake. During Drake’s verse, he spits, “I took you to the club and you hugged on somebody that I know / And I know them type of hugs. Same shit I do to women when I know I used to fuck.” Was that hug you gave to Partynextdoor in the video one of those?
(Laughs) I would say so, but it was more innocent. It was just to show the temptation, you know, mine and his. If you notice, it was Pardison and Partynextdoor. I did it to show that artists be tryna get at me, but I’m loyal. I didn’t cave.

Right, but your dude in the video did. He legit cheats on you that night in the club. Has anything similar to that type of disrespect ever actually happened to you?
No. That part wasn’t real. Imagine that shit happening, oh my god, I would die. Some of it was based on a true story; some was not. 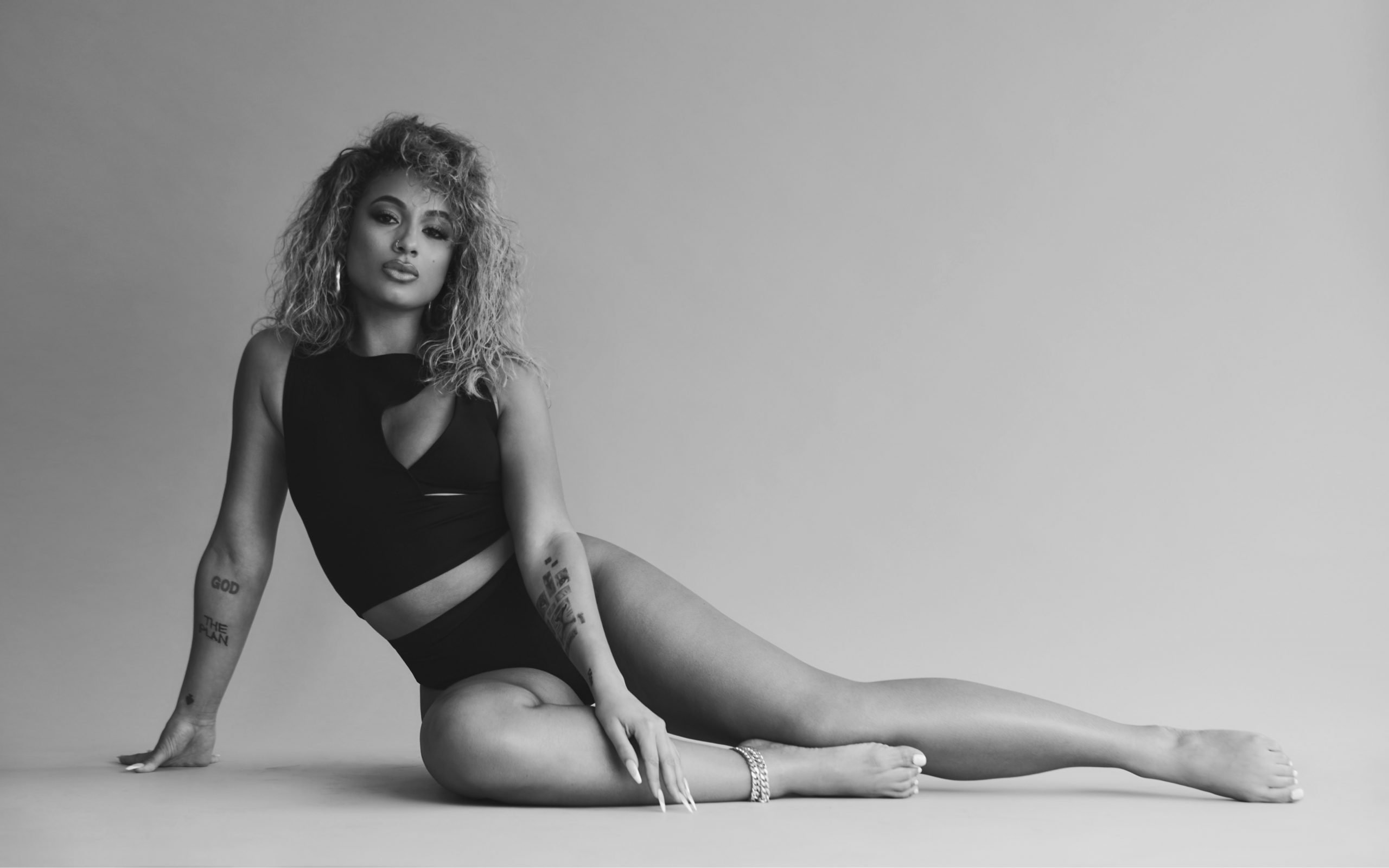 I think my favorite song on Movie is “Bullshit.” How was it creating that one?
Well, my boy Retro, he got five or six joints on the album. He just knows! I have been working with him since the first EP I ever dropped. He just played the beat, and that was it. He’s really good at writing as well. We do stuff together all the time. We just vibed, and I was going through some bullshit at the time, and it was crazy so…

Then the place where the energy switches on the project and video is on “Mistreated.” Was it intentional to mirror that feeling on the album and visual?
Yeah, well the track list came first, so the storyline made sense. Like, “you putting me through ‘Bullshit,’ now I’m feeling ‘Mistreated,’ and now I’m bout to turn up cuz I’m ‘Monique’ now.” So it definitely was intentional for the story and as far as the sound.

So about “Monique,” at the beginning of that track, you do the sort of “start the track over,” “run it back” thing like late 2000s mixtapes. Was that inspired by that era?
Not necessarily, but that part was crazy ‘cuz I was recording it, and then I had said, “one more time start me from the top.” Then it was just like in the recording, and I was like, “what is that?!” And they were like, “oh my fault I left that in.” Then I was like, “you should bring that to the front and start the whole track over!” And everybody was like “oh shit!” when we did it. 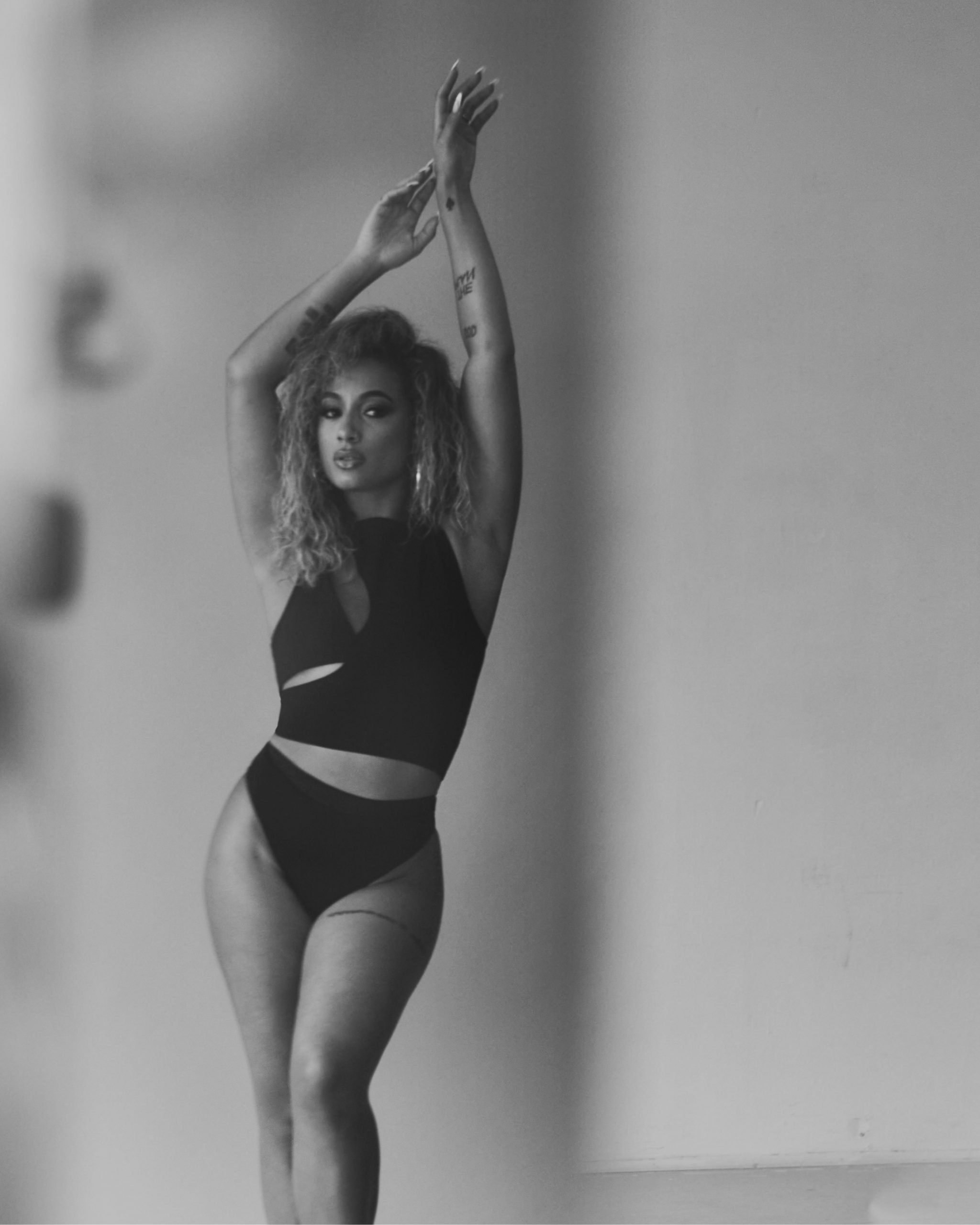 Oh, dope! So “Famous” and “Keeper” are your sort one-two punch of “flex on my ex” songs. Is it dope to now be able to make and have those because of your success?
Yeah. It’s fire. (Laughs) I know when he hears that, he’ll probably be like, “damn…”

So let’s talk about your dancing. Your style reminds me of Drake’s vocal delivery. You recognize the elite ability, but it all seems easily repeatable. Is that a conscious decision?
I think it’s just my vibe like I’m not thinking about it. But I have gotten that before that my style of dance is like effortless. I feel like how I dance and how I naturally move and perform is very chill.

Another repeatable dance was your choreography on DaBaby’s “BOP” video. How was that process?
I choreographed it with Cherry. He just asked me to do it. Rico, his director, and them hired like 50 dancers, and me and Cherry came up with it at my house really quick. Took us like 15 minutes. Then we just taught everybody, had a couple of rehearsals, then we taught DaBaby too. He got it, and I was like, “OK, dancer, go ahead!”

You must’ve gotten crazy calls to choreograph videos after that.
YG hit me up! I’m just not tryna be a choreographer. It’s something I’ll do if I got time for it. A couple of people hit me.

So one of the people who supported you early on was Prince asking you to help with his video. Did you ever talk to him about doing your own visual album?
I was super upset when he passed because I really wanted him to see me at this place. I didn’t have this idea then ‘cuz I was only 18. But I definitely feel like this is something that he would’ve seen me doing. Full circle. He would have been like, “wow.”

Last question. How would you describe your musical growth from your previous album, The Plan, to now with Movie? What about personal growth?
I feel like my writing is better. My pen got way stronger. On The Plan, I was involved in writing, but for this one, I was more. For personal growth, I feel like I just grew up as a woman. I was 22 when I did The Plan. Now I’m 26. I’ve just gone through life more. I’ve learned more about loving myself. How I’m, you know…THAT!