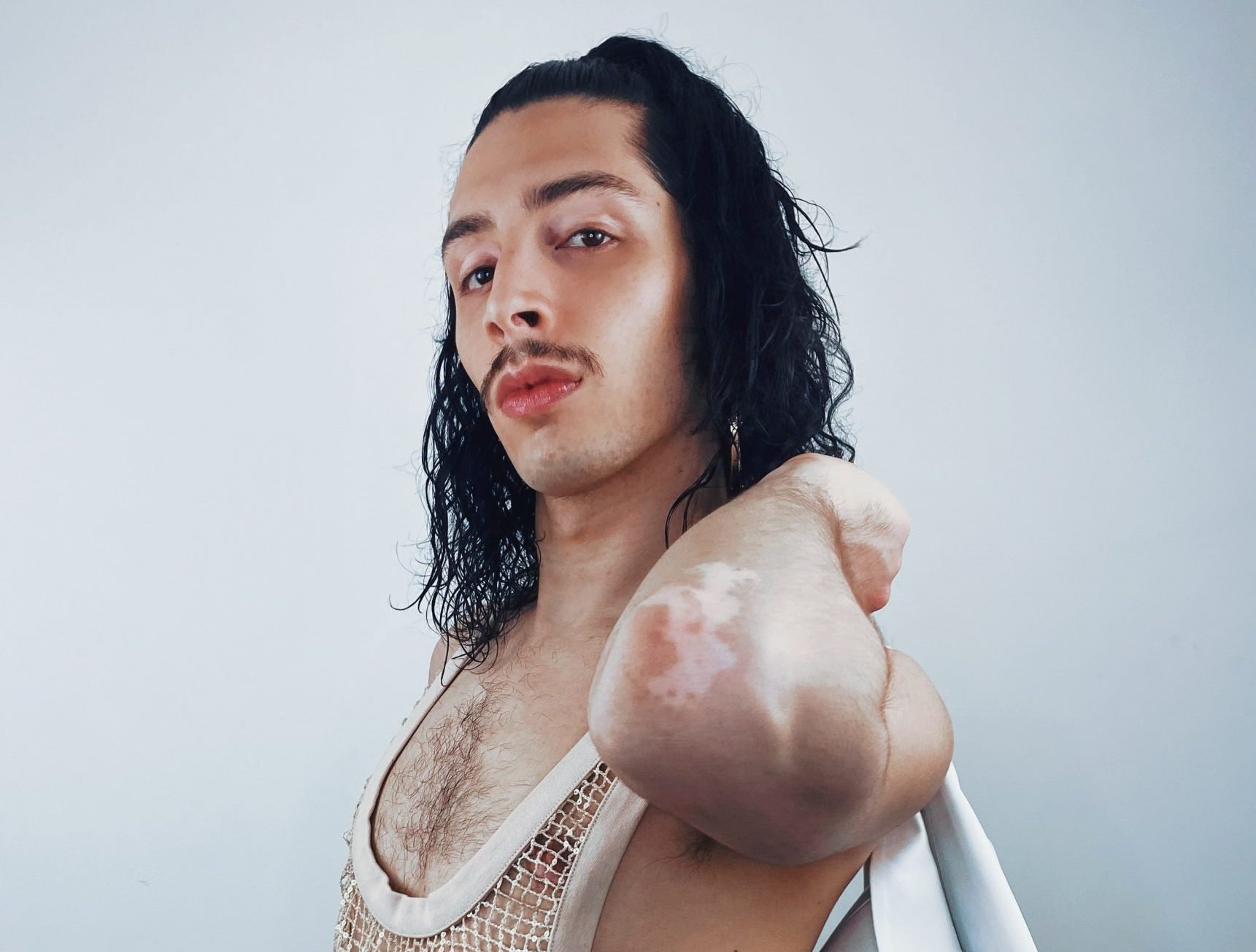 Meet the DIY, trans+ pop artist behind the soundtrack to one of the most heart-wrenching moments in 'Tiny Pretty Things.'

DIY trans+ pop artist Andrea Di Giovanni released their single “Shame Resurrection” in 2018, but the song is playing for more listeners now than ever before. The song (and Di Giovanni’s) newfound fanbase, consisting largely of Shazam-ers and drama television fans, has emerged likely as a result of the song’s feature on Netflix’s new series Tiny Pretty Things.

The drama centers numerous queer storylines, including that of Shane, the character who dances to the tune in the series, within its narrative about the trials and tribulations of students at a ballet school in New York. So, featuring the music of a trans+ artist like Di Giovanni is a no-brainer — and Di Giovanni feels strongly about the necessity of queer artists becoming the backbone of queer storytelling in media.

“It feels correct! It feels like we are finally getting to tell our own stories, which is something that I’m so fond of,” Di Giovanni shared with EUPHORIA. “And look, my point of view on this is yes, actors, it’s a form of art, and it doesn’t have labels and gender and all of that. But the thing is, until the playing ground is leveled and every single minority, every single human in our society has seen themselves represented on the screen, then yes, we start cross-pollination … But up until we get that representation, having somebody like me, who is a trans+ artist, independently supporting queer storylines goes a long way.”

That representation is crucial to connecting with the scene; having a queer actor in the role only bolsters the meaning of the words within “Shame Resurrection,” and Di Giovanni believes that Brennan Clost, who portrays Shane in the series, interpreted them in the choreography with raw emotion and real experience.

In the pivotal moment during which “Shame Resurrection” is introduced in Tiny Pretty Things, Clost (in character as Shane) says, “I need this song right now,” a sentiment that grasps the core of Di Giovanni’s writing for the track.

“That’s why that moment is so impactful, because Brennan has lived these words and these events in his life, and I live those in my life, so they are truthful,” Di Giovanni said. “They come from a place of truth, they are not a fabrication. They’re real, and I think the gut punch that a real emotion like that can make you feel, it’s priceless, and I think it makes the whole thing much better anyway.”

And the moment was a long time coming for Di Giovanni, who signed the agreement for placement in the show roughly a year and a half ago. With COVID-19 delays and uncertainty on the horizon, though, the artist began to worry that the show might not air at all. For an up-and-coming artist on the brink of a major opportunity, one likely heard by hundreds of thousands of streamers, the possibility made the waiting period feel like ages in the making.

“The series was originally meant to drop in August, but then obviously COVID happened and it kept being postponed to the point that me and my manager and my team, we were starting to worry like, ‘What if it never drops?’” Di Giovanni said. “… So, we kind of sat around and waited, and then I think it was probably the beginning of November, end of October when we actually got the date for the trailer to drop.”

But, without a doubt for Di Giovanni, it was worth the wait. Clost chose “Shame Resurrection” for the scene after the song was discovered by music supervisors Scott Belluz and Natasha Duprey and sent to Clost and the showrunner; Di Giovanni hadn’t seen the pivotal moment scored by the song, though, until the series found its way to Netflix. Though more than two years is a stretch for endless anticipation, Di Giovanni’s reaction — which they posted on social media — was a sweet sigh of relief and excitement.

And the accolades of “Shame Resurrection” don’t stop there. Along with raising Di Giovanni’s monthly listener count on Spotify over 50,000, the song hit the Shazam charts in over 10 countries across the world. It’s a major win for any artist, but Di Giovanni emphasized the importance of these milestone moments for their vision of their future music career.

“It’s really a new thing, and I’m blessed and grateful. That’s my dream,” Di Giovanni said. “I make no mistakes in saying that I want to be a huge pop star on this planet, so to start seeing my name in a chart, whatever the chart is … That’s the thing that gets me the most is [it’s] not a single country, [it’s] globally. It’s crazy. It’s so amazing.”

The timing of the song placement aligned well with Di Giovanni’s present work schedule, as the “Shame Resurrection” scene comes just ahead of Di Giovanni’s debut album release in early 2021.

In what felt like “the perfect moment” to the artist, new listeners now have the opportunity to be exposed to Di Giovanni’s entire discography; additionally, it is a prime opportunity for the musician to reflect on their artistic evolution from the track’s 2018 release to more recent work, like latest single “Leave It.”

“I think it’s a very natural evolution. I think it’s actually pacing back to kind of a re-updated era from the ‘Shame Resurrection’ era because I think that the sound and lyrically what I’m talking about, we are kind of in the same area,” Di Giovanni said. “But funny enough, it almost again feels like an update of that era, which I shied away with my previous project because I want to show the world, like, this is me.”

More than anything, though, Di Giovanni is considering the placement of “Shame Resurrection” in Tiny Pretty Things to be an example of what is possible as a DIY artist with hard work and finding success as a result. This is only the beginning, and the real-life implications are just as pivotal as the song’s moment in the show.

“It’s nice to also see that when you work really hard, you will get the things that you always dreamed of,” Di Giovanni said. “It’s just that it takes a little time, like everything in life, really. But especially for us DIY artists, it can take a while more than [our] counterparts that were signed to have bigger managements … I really want to be that example for people that if I can do it, you can do it, too.”