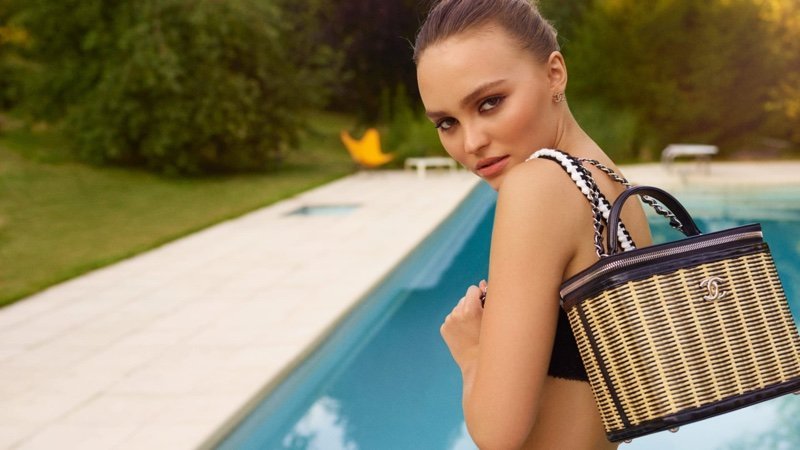 For Chanel’s version of escapism, we have landed on the French countryside off the coast of the Riviera, where the 21-year old actress/model, Lily-Rose Depp, clad in golden belly chains and tweed, struts around, languishing in the sunshine. She is equal parts refreshing and dignified, bringing a strong youthful essence to the clothing, as she models the new Cruise 2020/21 collection — called Balade en Méditerranée — from the legendary fashion house.

The campaign was shot in Paris, at one of the grand mansions that provides the old glamorous stone facades and a spectacularly lush garden. The collection takes the signature tweed that would be used in a suit and breathes new life into it: bralette tops, miniskirts, and tied-at-the-bottom sweater tops. A highlight of the collection is the accessories: the golden belly chains, the wicker basket bag with the golden interlock C charms, even the glasses that flip up to give a high-fashion so you can read in the sun.

The choice of casting Depp was with creative director Virginie Viard and photographer Karim Sadli. The latter told Grazia, “Virginie Viard was looking for someone who could embody a freshness, a sort of candour, a liberated and confident femininity, and who has a playful spirit. I’ve known Lily-Rose since she was young in Los Angeles, through her mother, before she started her career as an actress. I have a great deal of affection for her, and we shot this campaign in an atmosphere of familiarity and trust.”

Of the collection, Depp said in a behind-the-scenes video, “I think the mood of the campaign is just very kind of effortless and intimate and spontaneous also, like, the kind of emotions that we can feel when we’re just on a nice vacation!”