When Bridgerton dropped on Netflix on Christmas last year, it immediately took over — it took over TV screens, it took over the internet, and it took over the lives of millions of people all over the world. It also changed the lives of many involved in the show, one of which is actor Martins Imhangbe. As boxer Will Mondrich and best friend to Simon Basset, Duke of Hastings (played by Rege-Jean Page), Imhangbe had his work cut out for him. The actor was no stranger to performing — he has a deep background in theater work — but his role in Bridgerton was his very first TV gig. Starting your TV career with Netflix and Shondaland is no small feat, but Imhangbe took his job very seriously.

Though Bridgerton is based on the book series by Julia Quinn, the character of Will Mondrich was created specifically for the Netflix adaptation. This gave Imhangbe a larger task of developing his character in a way most of the others on the show didn’t have to. His character, though, was based on real-life boxer Bill Richmond, whom Imhangbe studied endlessly to prepare for the role. On the heels of the show’s success, we caught up with Imhangbe over Zoom one early morning to see how he’s handling the that success, how he bonded with his castmates, and what he hopes to see in season two.

So I just wanted to see how you’re doing with the absolute blow-up of Bridgerton.

It’s been a whirlwind. I can’t lie. I knew the show was really good, but I didn’t know it was going to take off the way it has and I’m still catching up. Every day I get phone calls, text messages, emails of people who’ve got through the series and it’s all been so positive and everyone just can’t wait for more. It’s not bad. Not bad at all.

What attracted you to this project in the beginning?

I was told about the audition when I was doing Death of a Salesman. Will Mondrich is based on Bill Richmond, so when I did my research, I was like, “Why the hell don’t I know about this guy?” Because I’m a huge boxing fan. I did my best when I put myself on tape and afterwards that’s when I started to really get into the world of Bridgerton, and I was really drawn in by their way of displaying inclusivity. I don’t necessarily use the word diverse, but I like inclusivity because we’re seeing the world as it should be. I was really excited about being a part of that in an integral way as well.

What was it like working with Shondaland and Netflix, which is such a huge combo?

Huge combo. At first, I just really wanted to do a good job. It was my first TV job, so I just wanted to do a good job and serve the world and serve the piece. So that was my focus. And I was so amazed at how … Well, not amazed, but I was just so overwhelmed at how welcoming everyone was, especially because I was a newbie and no one knew who I was and everyone treated me with such respect and I felt free enough to ask questions. I didn’t feel like I had to apologize for being there. And that’s just testament to the whole team.

It’s definitely a big first TV role for you.

And what a way to start. 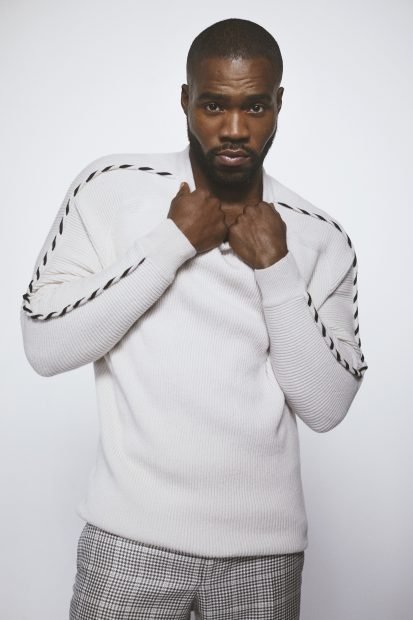 You were saying you researched the boxer that your character is based on. I guess your preparation was a little bit different from everyone else’s because your character is not in the books. How did your process of developing your character pan out? What all did you put into building this character?

The first thing was reading his book. So I read two books on Bill Richmond just to get a sense of where he was coming from because initially the part was American. So there was this whole narrative of him coming from the States and being a boxer and finding favor in society because of his charisma and his boxing abilities, but there was also the script. We decided to make him from London and his father fought in the Dunmore regiment. So I had to research what that was about because you could fight for your freedom, which means that the next generation will reap the benefits of being free.

There was the physical side of it as well. Like I said, I’m a huge boxing fan. Boxing in the 1800s is completely different to boxing now. It was all bare-knuckled, and they used to drink alcohol and there were no rounds. You just keep going until someone got knocked out. It was just very brutal. So really getting my mindset into that world of survival and what that was; to be working class and just trying to provide for your family and using boxing as a way out. They got me a personal trainer.

I had to unlearn everything I knew about boxing and go into the old-fashioned style of just throwing punches, and also they had a different physique back then as well because they didn’t have all the fancy facilities we have now in terms of gyms … so they used to carry logs and chop trees and all that kind of stuff. So I had to do quite a bit of strength and conditioning and do a lot of core work. There was a lot that went into it. There was so much that went into it and looking back it’s just amazing. Just an amazing journey.

I remember seeing in some of the other cast interviews that they were saying that during filming it was so hot because of the time of year. Did you deal with crazy heat?

I guess it depends because we filmed for about eight months I think. I just remember doing the boxing scenes and just freezing. Being so cold. I just couldn’t wait for them to call action so that we can leave. So without any spoilers in episode eight that he showed out, that was filmed I think it was in January or December, so it was freezing. We have to get our robes on between takes. We just had to keep moving because the moment you stopped and you were shirtless the cold is just not nice, especially in that venue as well.

The show’s getting a season two, which is really exciting. Because your character isn’t in the books, we don’t really know what might come next for him. What are you hoping to see next?

I would like to see what he does with the winnings. I’m sure everyone would want to know what he invests in and what is the state of his family now, but also I would like to see maybe a flashback or two about how he met Simon and just a bit more backstory would be quite interesting. More of a reflection as to how he got to be where he is and maybe what inspired the boxing. And I think that would be quite, quite interesting. Maybe to also see what the next generation of boxers might be. I think with that amount of money, I think boxing might be behind him but who knows.

I also love that your character is the Duke’s best friend and it seems like you and Rege-Jean Page grew close on set. Was that the case?

It was a beautiful working environment and yes, me and Rege got really, really close because of the nature of our scenes, and we used to go to boxing warehouses together and we just related. We’re interested in similar things and we just bonded very naturally, which is really nice because it can always be awkward if you don’t bond or you don’t form a connection with someone who you have onscreen connection with. So it was nice that we had that organic chemistry. There were a lot of laughs and trying to compose ourselves and stuff like that. And also I really admire Rege-Jean’s work ethic. He works extremely hard and at times I was quite concerned about his health. I used to check in and be like, “Are you sleeping? Are you OK? Have you got some food?” Because he devoted so much of himself to the role and it’s a huge role and so complex so I’m so happy to see that everything is paying off and all his hard work just resonated.

Since this is your first TV role, this was a lot of people’s introduction to you. What else do you want people to know about your background?

I used to go to a youth art center and they used to do drama classes and performances. And I remember just going there as a hobby. It wasn’t something I really saw a future in. I think I was about 14, 15 at the time, and we did a modern take on Romeo and Juliet. I remember just getting so much craze, a lot of feedback, and people like, “Oh, you should pursue this.” And I kind of just went, “OK. Cool.” But I didn’t really think there was a future. I didn’t know what I wanted to be. I mean, I just carried on there and everything sort of became a snowball effect.

I went to drama school and everything just sort of fell into place. And I think it was at drama school where it dawned on me that, “Oh, this is actually a career. This is something that I can do for the rest of my life.” And I just pursued it because I’m in love with the process. I love seeing how things start from nothing and then build and then become something great.

So then you made the jump from theater to TV here and how was that? What was that transition like going from a live theater show to filming?

Great question. I think with theater there’s a tendency to be a bit larger than life at times, but then you realize that life is large and you sort of think there is a difference between TV and film, but essentially you’re telling a story but you’re just catering to the audience. So the audience in TV is the camera. So whether that’s a closeup or whether that’s a long shot, you have to cater to that; where the audience is. Same in theater. The audience is right in front of you and whether you’re in a big theater or you’re in a small theater you have to cater your performance or cater your storytelling to that audience.

So I think it’s just being mindful of your audience in both. As your TV debut, you probably get one scene or you have a guest appearance and that’s it. But with this, I had five episodes and I had quite a few scenes, so I had a chance to really investigate and deal with the relationship with my audience and understand what that was.

What’s up next for you?

Is there anything else you want to share, whether it’s about Bridgerton or your other work?

I just want to commend Chris Van Dusen and Shondaland for how supportive they were and how they were willing to listen and be attentive to the actors’ needs. I hear that’s pretty rare, but they were very attentive. If there was a time where I didn’t understand what I was doing or there was a time where I wasn’t sure about something in the script or anything like there was always room for a conversation, which I’m so grateful because this industry should be collaborative and it’s nice to have experienced that.