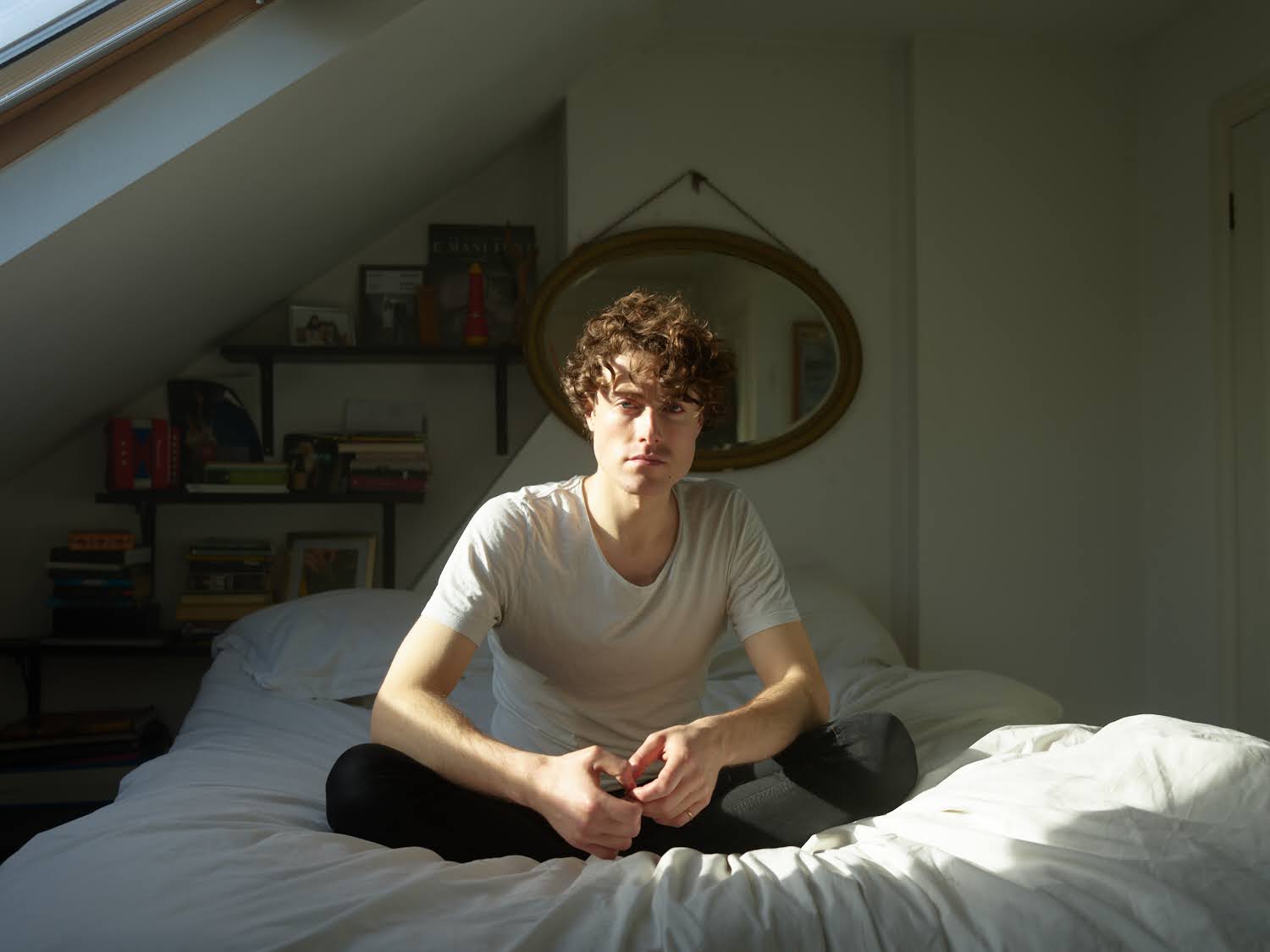 Following a moment seems impossible for most people. In a world like ours, the daily lifestyle is often nonstop, but for London-based Welsh artist Alekxandr, that moment is everything. Disguising the human condition in magical waves of alt-pop, the singer, songwriter, and producer dove into a world of making music where he freezes fleeting moments into intricate, memorable sounds. As a follow-up to his previously released hit, “Disney Love,” Alekxandr returns with the premiere of a performance of his latest single, “fireflies in brooklyn.”

Filmed in Peckham, Alekxandr’s hometown, the artist showcases his talent for framing passing seconds with music through the performance. “It felt right to shoot at twilight just as the city lights begin to take over from daylight,” he explained. “In the sounds of the production and the artwork around the song, I’ve been trying to capture the atmosphere of that time of the day. Knowing that we only had a 10-minute window as the light changed, I just had to give in to the moment and be in it, which is kind of what the song is about. Being up there with all that sky felt like sending love through the ether to Brooklyn and to the boy who has no idea there is a song written about him.”

Shot all in one take, the performance that Alekxandr gives while singing the song manifests how “fireflies in brooklyn” is supposed to feel. Momentary yet everlasting. With the ability to create soundscapes that encourage you to dream, all while reminding us what makes us human, Alekxandr is a driving force in independent queer pop, creating song stories that remember moments better than we can feel them. Watch the premiere of “fireflies in brooklyn – live in peckham” here, and dive into the stories behind all of Alekxandr’s creative processes below.

You have experience in both acting and making music. What about creating art is special to you?

What’s most special is the release that comes from sharing your truth with someone that recognizes that truth within themselves. That exchange of energy with an audience is incredible. Creating art inspired by my life helps me understand myself and others. I try and look at a situation from all angles. It grows my empathy and it’s the most effective remedy I’ve found for emotional turmoil. I didn’t consciously choose to make art my career, I’ve just followed my passion and it’s led me here.

The entertainment industry often fails its artists at care for mental health, and I know that mental health is something that’s very important to you. What do you do to take care of yourself and protect your energy as an artist?

I guess there’s no incentive for the industry to concern itself with artists’ wellbeing, especially when there’s this unhealthy belief that pain makes great art. I don’t think that many industries do look out for their workers’ mental health, but I do think we all need to become an expert in our own wellbeing because no one is going to do it for us.

I wish I could tell you that I meditate every morning, do yoga, write for five hours, don’t look at my phone past 9 p.m. and sleep for 12 hours. I aspire to be that guy, but I am very much not. The most effective thing I do to protect my energy is to say “No” and cancel plans. It’s not good for my social or romantic life, but as an introverted only child, I rejuvenate by being alone. My writing, playing, and daydreaming also happens in solitude.

“fireflies in brooklyn” is such a feel-good song, yet I know your lyrics touch upon feelings of insecurity, fighting “secret fights.” Can you open up a little about the meaning behind the song?

I remember playing it to a friend early on, saying, “This is my happiest song,” and he was like, “You think this is happy? It’s so full of doubt.” It is this idealized romantic song, but I also wanted to touch on the inner demons that we all have to deal with. You know when you have a strong connection with someone, you get an instinct about what they are going through. You tell it by the flick of their eyes or the way they shift their hair, in the space between your question and their answer, little chinks in the amour that reveal what’s going on under the surface.

It’s that thing of, “Wherever you go, there you are.” You leave home but you’re “under the same sky.” We take our baggage with us. I was “walking in darkness.” He was “fighting secret fights,” and that night we spent together threw us into the moment. It helped me to let go of what I had been holding on to and to be open to the beauty around me. I hope it did something for him. I like to think we gave each other light for the journey.

Can you elaborate on the meaning behind the line, “I’m with you, whoever you are?”

It’s me reconciling this amazing feeling that there is no one else or anywhere else in the world I would rather be than right here with you, even if I’ve only known you a couple of hours. I’m reminding myself that although I feel like I know you, I don’t. You could be anyone. By this time tomorrow, I’ll be the other side of the Atlantic Ocean and these moments are all we have. That’s probably why it was such a romantic encounter. We didn’t know each other. For that night, we were able to be each other’s perfect strangers.

What was the creative process like for the production of this song?

Long! This is one of the first songs I ever wrote, and it’s been with me as I’ve learnt about music and songwriting.

The first version of “Fireflies” was an eight-minute spoken word poem set to a soundscape of noises I made with my mouth on a loop peddle. We made a version on my flatmate’s acoustic guitar, which we ended up playing at a few cabaret nights. People responded well and that little bit of encouragement went a long way.

Later, I started working with producer Joshua Davenport. I knew all the sounds I wanted in my imagination so it was a long search to find the instruments that would make the noises in my mind. I could hear this bubbly, fruity, bouncy sound moving through the chorus, which I eventually found in a Korg MS-20 synth. We painted a bruised twilight sky with cinematic strings. It was educational, exciting, exhausting. We worked on and off in Joshua’s garden shed for two years. I remember feeling like, “If I can just capture the right feeling in this song, I’ll die happy. I’ll never ask for anything more.” I finished the song at the beginning of this year with some additional production and a fire mix by the brilliant up-and-coming Danish producer Oscar Moos with whom I made my last song, “Disney Love.”

I’m happy that some original sounds from that time in Brooklyn made it into the final version. The sirens, a basketball bounce that became part of the rhythm track, and the guy that shouts, “Use your spirit.” I caught that as I was chatting into my voice notes whilst passing a basketball court and I let it become my mantra: “Use your spirit.”

Where do you turn to when you need to find inspiration for music?

I feel like inspiration turns to me. It’s just whether I’m able to pay it the attention it needs, take it by the hand, and go unexpected places. Usually, they’ll be some situation I’m ruminating on and a thought will come in a melody and I’ll look for sounds that embody the feeling of the situation. I wrote my song “End of the Blue” on the tube and it felt natural to use the incredible sounds underground. Most of the percussion in that song is made up of spits, sparks, and doors opening and closing that I recorded on the tube. What I’m saying is that inspiration is everywhere always.

Who are some artists that influence the music you make today?

I’m massively influenced by the songwriting talent of Amy Winehouse and Lana Del Rey, and I’ve loved Bjork since I was 8. Production-wise, I love the work that A$AP Rocky did with Clams Casino. I’m obsessed with this song, “I Only Have Eyes For You” by The Flamingos. That was the feeling I was going for with “fireflies in brooklyn.” Magic realism.

As a queer pop pioneer, what does it mean to you to be able to create music that honestly reflects the thoughts and experiences of someone as part of the queer community?

It’s not something I think about and I usually find the mainstream music industry a bit dull. I’m just doing what comes naturally by making songs out of my life and I happen to live a pretty queer life. If I stop to look at the bigger picture, I do feel lucky to be making work at this time. Twenty years ago, this would not have been possible. To record and release a song, you needed permission from a (probably straight) gatekeeper at a record company. It is a problem that there’s no remuneration for what I do at the moment, but what is amazing about streaming and technology is that I have nothing between me and my audience. Every lyric, sound, visual comes from my heart.

You taught yourself how to play the piano, which is amazing. There’s obviously a sense of self-motivation in you to be an artist. What advice do you have for aspiring musicians or entertainers?

It definitely comes from an inner need to create stuff. Certainly, no one is out here asking me to be an artist! The advice I would give to myself is to follow your obsession. As a boy once said to me in a dark room, “You do you, boo. Do what you love.” There’s no guarantee of pleasing anyone so get good at pleasing yourself. You have to love it otherwise, what’s the point? I think making art is selfish in order to eventually be generous. Hopefully, what is personal becomes universal. I also think that having trusted collaborators that you can create with is incredibly important and will enable you to reach higher highs than you can on your own.

No one said it better than the guy in the basketball court. “Use your spirit.”

What’s the message you want listeners to take away from “fireflies in brooklyn”?

The song makes me think of the characters in Lost in Translation. At no other time or place would their relationship have made sense, but in that very particular situation, they were able to be there for one another.

Everything changes. The moment is all we have. Random beauty happens, and you will find your soulmate for a moment. Nothing remains. All the colors the sky moves through on its journey into night, the inexorable surge of the river to the sea, our souls are always evolving. That’s why, as alluring as it sounds, I reject the idea of a “soulmate for life.” If you’re lucky, you will have a soulmate for a moment. That moment maybe a night or a decade. It’s hopeful because it happened, and it can happen again.