Wait, don’t leave! We’ve drawn a deck from our tarot cards and see a mystifying change in your midst. Prepare to ignite a magical, whimsical, and eccentric metamorphosis enabling your inner badass to unleash. We can only think of a single, stellar project with the extraordinary capability to trigger such a fantastical transformation: Anabel Englund’s debut album Messing With Magic.

Embark on a lyrical journey of growth and love on the 10-track collective while an echo of dance-worthy synths, dreamy pianos, and spellbinding drums soundtrack a listening experience straight out of a movie. Englund herself, being the true personification of fierceness and spunk, sings with enough gusto and passion that her vocals feel like a sonic hug. She’s a captivating breakout star able to invite listeners, old and new, with a sense of warmth and pride few artists could mimic. And many agree; to date, Englund impressively boasts over 10 million streams and 15 million views on YouTube. Perhaps you’ve already taken a listen to her previous singles “So Hot” and “Picture Us,” both of which hit No. 1 status on their respective Dance and Dance/ Mix charts.

While Messing With Magic proves to be a wholly consistent story of desire and maturation from start to finish, likely the legitimate star of the show is Englund’s ability to blissfully blend pop, indie, electronic, and alternative genres into a sole classification unique to the singer alone. She’s the epitome of a musical enigma unable to be tamed by what others think she should present as an artist — her out-of-the-box nature provides the freedom to create for herself first irrefutably. With authenticity functioning as the ultimate crux to the album as an entity, expect nothing less than a diary of the starlet’s most genuine, intimate sentiments.

Analogous to her Southern California roots, much of Messing With Magic simulates the aura of a revitalizing, refreshing drink on a 100-degree day. But what’s in the cup? Based on the veil of unorthodox edge akin to Englund’s style, we’re guessing it’s something unquestionably playful with a bit of robust sharpness. Margaritas, anyone?

Catch up with Englund for an in-depth breakdown of the sorcery behind creating Messing With Magic (available for streaming on all platforms). 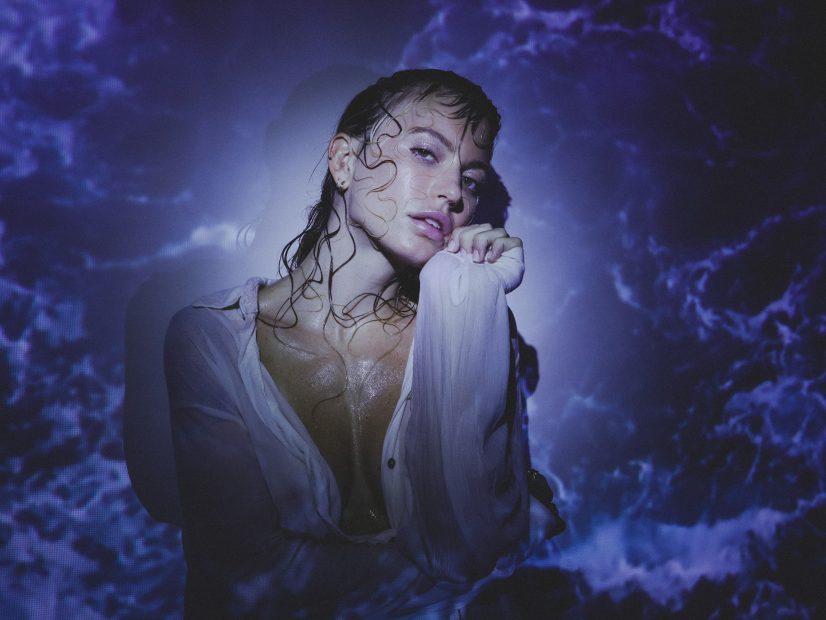 I was wondering how would you describe your presence as an artist — is your goal to communicate a specific aura? Or is every day a surprise of learning a new facet about yourself?

When people finally have the chance to listen to your debut album Messing With Magic, what’s the impression you’d wish people walk away with? Maybe a desire to dance, to laugh, to cry? Anything in particular people should expect to get out of the experience?

Every song has a different meaning. I write a lot about ending toxic things. “Underwater” and “Burn It” are about saying goodbye to something that doesn’t serve you anymore that you’ve been holding on to for so long. But then there’s also “Float” and “Picture Us” that are about letting go and trusting this higher thing, whether it’s a relationship that’s really good for you, a friendship that you found, or something else. Have faith, love, and just go for it to see a bigger picture in a better reality that maybe you never thought was possible for yourself.

Sometimes when I’m writing songs, I don’t even know what I’m writing about, and then I hear it a year or six months later and I’m like, “Whoa.” I’ll almost burst into tears because I heard my higher-self talking to me at a time when I didn’t realize it. So, I hope that people can hear the message of that voice inside of me. It’s been very cathartic for me, and I and I hope it resonates with people the same way — that they get a message from the lyrics.

I definitely see that. I know when I listen to it, I relate to every song differently. Referencing Messing With Magic in the past, you’ve talked about how the album is simultaneously a love story with someone else as much as it is a love story with yourself. That being said, what is your favorite thing you love about yourself at this current moment?

What I love about myself is just my ability to keep going. Because I always say that I have a lot of fears — like a lot of us do — but I have just an inch more of courage to keep doing all these things. Even releasing this album, with everything that’s up and coming, it’s all so big. I’ve never been standing in water this deep before and I have to keep going. It can be scary, but you have to keep going.

Anyway, I think the thing I love about myself is my integrity to put one foot in front of the other and see what’s next. I think a lot of people can be paralyzed in fear, and instead of the fear paralyzing me, I acknowledge it, but I just keep walking forward. I think that is something I’m pretty proud of actually.

So, when people think of Anabel Englund as an artist, what do you hope people say about you? And as an extension to that, how do you communicate those intentions through your music?

I honestly don’t know. I don’t really think about what other people are saying about me! I just do. If I like something and if I’m vibing with it, I trust myself to know that I’m not crazy. If I like it, then someone else is going to like it. There has to be at least one person out there in this world that’s going to like it. So why not just do it?

Fair enough! I feel like some of the best artists are those who don’t necessarily care too much. They stay super authentic to who they are and believe in the music that they’re putting out. It’s really special to be confident enough to trust yourself wholeheartedly throughout the process.

Yeah! And I’ve had the opportunity to do things that could maybe get me a “huge” song faster or work with big artists, but then I find out those same artists don’t always make their own music. I’ve had so many opportunities to be authentic to who I am, and I don’t do what I don’t like, and I won’t work with people I don’t really vibe with. I just have to be true to myself and I don’t really plan on doing anything else.

I love that. That’s awesome to have your true self at the core of your music. You just briefly mentioned the opportunities you’ve had to collaborate with other artists. I know you’ve worked with some amazing acts like Hot Natured and Lee Foss, so is there anyone specific you’d like to collaborate with in the future?

I would love to see a Miley collab in the future. Definitely see the vibes matching with that.

I love her, and her voice is just amazing. There are so many I love! SZA, Teyana Taylor, and some of the big songwriter machines like Max Martin. I want to work with people who will push me out of my comfort zone, that are absolute slayers in music. I would love that.

That’s definitely a special mindset to have. To be willing to step out of your box so openly. I feel like a lot of your music is unique in that it’s totally genre-bending. At the same time, it also fits in an umbrella category of electronic and dance. What draws you to that genre?

I think it’s just the genre I found my footing in from a younger age. I did the Disney thing, and then I found house music and I just fell in love with it— and I knew it was something I could conquer.

When you think of the pop world it’s like, “OK, that’s a whole different beast.” Then with the dance music, I knew that there were people who I could meet. All of a sudden, I was working with people who were my idols in the dance music scene. But then after a while, it was like, “Now I’ve kind of hit the ceiling with this genre and I want to go further. What do I do?” So, I made different music. I started making things more pop-leaning and had different fun dance remixes to keep in my genre, you know? Different things like that.

Going off of that, how do you think your new album, Messing With Magic, compares to your previous projects? How has your music grown with this release?

Honestly, I wasn’t writing this album as an album. Making these songs, I have truly found my voice and who I am as an artist. Before, I saw that slate of marble and I didn’t really know what was there, but I knew something was. Since I signed with my label [Ultra Records], they connected me with all these different songwriters and all these different, amazing producers. It was finally like I had clicked into something that I knew that I needed for so long. Instantly I was running with the machine and working my ass off writing and writing to make some of the best music I’ve made so far — and I’ve continued to make so many other great songs.

That’s amazing to hear; I love that! What do you think is the ideal way to listen to this album? Maybe in a club, blasting it in your car riding down the highway, at a basement party, or even alone in your room? How should we listen to Messing With Magic?

It can be all different ways. Now, most people obviously are limited to just blasting it in their car — which I think would be fun during a road trip. If festivals were happening it would be so much fun to just play a set. So, I would say, watching me perform the whole album. Maybe even if you wake up in the morning and you’re in kind of a weird mood, just putting it on to your favorite song and letting it play.

I can definitely see that. Waking up in the morning and putting it on for a feel-good vibe. You just now mentioned playing festivals, and you’ve already played some of the biggest gigs from Coachella to Glastonbury! As a wrap-up question, now that shows are at a standstill, do you have a favorite live music moment? Be it from your own set or at a concert you’ve been to, is there anything super memorable that comes to mind?

The first one that comes to my mind is performing at Coachella with my brother, Jackson. I was So. Freaking. Nervous. I get nervous sometimes before shows — which is to be expected — and it was also freaking Coachella. It was just my name only; before, I had Coachella with Hot Natured, but this time it was “Anabel Englund: Coachella.” It was a big deal for me. It was prime time in the middle of the day. It was packed, but just getting up and performing with my brother was so amazing. So epic. And for my birthday last year, he gave me a photo of us performing on the stage and it’s just so sweet. I think that’s something I’ll always remember and cherish.