“I feel like I always tell my story differently,” is one of the first things Priya Ragu tells me, as we chat over Zoom. With her Tamil-Swiss background, it’s easy to see how that story would be somewhat difficult to recap in just a few sentences. Yet, it is at the heart of Ragu’s artistry, with her music being a mix of contemporary R&B, Sri Lankan beats, and Tamil chants.

Ragu grew up around music, what with her father creating a band and playing shows at weddings and birthdays. “We would play Tamil songs, and that’s when I really got into singing.” However, singing wasn’t necessarily a major dream of Ragu’s. In fact, for a long while, she was more preoccupied with playing the violin. She started playing when she was 7 years old and continued to do so for seven years — until she realized that “I can’t sing and play at the same time.” Plus, she adds later with a mischievous smile, “it also just wasn’t that cool to play the violin, at least not when you’re 14.”

She refers to singing as her calling. “Something in me told me that I have to try and use this talent, and see how far I can go with it.” It hasn’t always been easy for Ragu. While her parents are incredibly supportive now, they were initially strict — discouraging her from listening to Western pop. Plus, Ragu has a steady job at Swiss Airlines that provided her with a safe income, and Switzerland isn’t exactly known as a music industry bulwark. “At one point, I tried to ignore it. I was enjoying singing, and I knew I had a special voice, but here in Switzerland to make a living out of it — it always seemed impossible in a way. If I’d been born in the UK or the States I feel like it’d be more realistic to have a dream like that, but here you don’t see many Swiss artists have that international breakthrough moment,” Ragu elaborates.

Still, she couldn’t let it go entirely, especially when she continued doing open mics and started having to field questions such as “when’s your album coming out?” and “what are you working on?” She laughs when she thinks back to how annoyed she felt in those moments. “I would actually stop going to these open mics, because it’d tick me off. I didn’t realize that the universe was speaking through these people to me.”

In the end, that feedback did end up making her wonder about where her life was headed and led her to decide to quit her day job in favor of exploring a professional career in music. “I was like, ‘is this really my life now? Am I really this person who works 8 to 5, although I have this creativity in me?’ It feels like I need to know now, or I might always regret it. So I need to give myself the space to go somewhere and see what I can create.”

It’s how Ragu ended up in New York City for six months, though she admits the first five where spent on hanging around, shopping, and going for dinners. “I took it really easy, until I realized in the last month — oh shit, what was the reason I even came here?” She confesses. “I put myself in a pressure position, and it turned out to be the best thing. I was talking to my brother, Japhna Gold, a lot and he sent me some ideas, which I’d write songs on and then send back. It was like a back and forth with voice messages and Skype sessions, and at the end I had 10 songs. I came back, we worked on the songs and started to release one of them.”

That first song immediately got her Swiss media attention, and it made her realize that they had to strike while the iron was hot. “So we released a second song, ‘Lighthouse.’ I knew I had to go to India to shoot the video, even though I actually didn’t really have the budget for it. Luckily, my job at Swiss Airlines made that the flights were at least cheap. I linked up with a stylist from Mumbai that I’d met while in New York, and we ended up shooting the video there.” 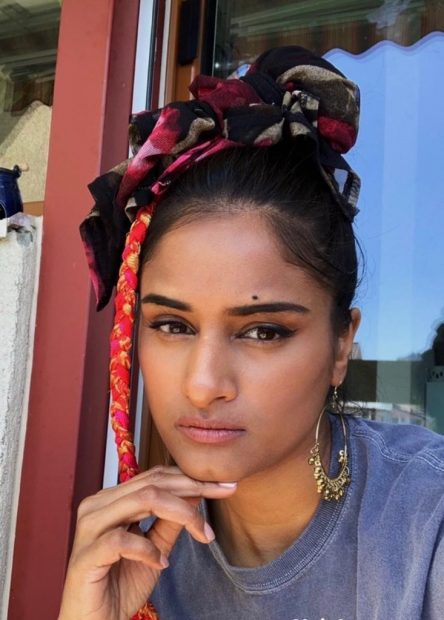 It’s that video that alerted international media of her existence, with Rolling Stone India and BBC both vying for her attention, with labels following soon after. And while COVID-19 has been disastrous for so many artists out there, it was actually in the middle of the pandemic’s first wave, that Ragu ended up signing a record deal with Warner Records.

“I’m really lucky it happened in this way. I’ve heard stories of record labels dating you for one year, trying things out as you go for dinners, show some songs and stuff — we just had one call and then management took over. It was a very fast deal,” she grins.

Most importantly, Ragu doesn’t have to compromise on her musical identity, which is a fusion of soul, R & B, and distinct Tamil influences. And even though she no longer needs to stress as much about budgets or DM people herself on Instagram, she’s still very much involved in the creative process from beginning to end. “I’m really grateful that Warner took the album as it is, with the Tamil influences and also me singing in Tamil. I mean, this is who I am and this is who my brother is. We grew up between cultures, it’s the Western part and also the Tamil part. Being able to put both cultures into the music and also into the visuals and styling and everything I do, yeah, it’s quite fulfilling in a way.”

Her forthcoming album showcases that same juxtaposition of cultures, providing a unique blend of music styles. For example, one of the tracks has this almost retro-classic soul feel to it, whereas single “Good Love 2.0” certainly has more distinct Indian influences to it. “Not every song is a mixture of cultures, some songs are super soulful and some songs are Kuthu, Indian, rhythm. The album’s just a mixture of everything. It gives me the freedom to create what I want.”

Ragu is also very aware of the fact that there is little representation in mainstream music when it comes to South Asians — not without being pigeonholed to just one particular genre. To be able to have that freedom to create her own style and challenge perceptions of traditional cultural gender norms is something that’s close to her heart. “For me, when I grew up, it was just M.I.A. And as soon as I saw her, a whole new world opened up to me and it gave me a lot of strength. And also to embrace my own culture. I’m hoping that I can inspire other people from the diaspora that we are not only the people who can clean and cook, but we have this creativity in us as well.”

Ragu’s adamant on incorporating exactly that message into her music as well. “It’s about celebrating diversity and showing off my Tamil roots and just really embracing who you are.”

Ragu’s brother, Japhna Gold, is her main collaborator when it comes to her music. She smiles as she recounts exactly why they work so well together. “We have the same vision — we want to empower women and we want to stand for the same causes and stuff like that. So we see ourselves as messengers in a way, you know? Through our music. So it’s just easier to work with my brother.” Ragu adds that it’s also just a lot easier to work with someone who knows you so well, knows your past and present so intimately, because they’ve already seen it up close. “To show weakness and stuff like that, I don’t know if I could do that with some random producer. It’d take a long time to open up.”

That’s not to say that Ragu or her brother won’t work with other people — “Good Love 2.0” was created with another collaborator, and Ragu notes she’d love to work with other musicians as well. “It’s just that we created something very unique and I want to keep that and build on that. I don’t know what’s going to happen in the future, but the core unit is just the two of us.”

What makes those partnerships so powerful, is that it’s almost second nature to complement each other. Ragu also sees this in how they go about crafting songs. “My strength is really the melodies — it comes very quickly and effortlessly, and then my brother can build up from that. Sometimes I’ll provide him with chord progressions, or lyrics, you know? It’s just whenever I’m not able to take it any further, he’ll pick it up from there and vice verse. We fill in the blanks for each other as we go.”

In a way, it’s reminiscent of the symbiotic relationship between Billie Eilish and her brother Finneas. At the core of Eilish’s work is always just the two siblings, although both of them have ventured out to work with others as well. When I bring this up, Ragu seems excited to hear that there are more strong sibling bonds in music. “I feel like there should be more siblings working together, actually — I don’t understand the absence of them. There used to be so many more, the Carpenters, the Jackson family,” she trails off.

And now there’s Priya Ragu and Japhna Gold. Another advantage of their collaboration, is that Ragu doesn’t have to “experience everything myself, you know,” she says with a grin. “Not all songs are written from completely autobiographical perspectives. As long as you find a story that you recognize and connect with, that’s what matters.”

Now that the songs are mostly done, it’s the connection with the audience that Ragu is looking forward to the most. She confesses that she’s not a big fan of the livestreams and online shows some artists have been doing. “I don’t like to play a concert and not get to experience the live reaction and energy from a crowd. So I really hope that once we’re ready with the band, that we can go out and actually play live.”

Given the odds on all the other things that Ragu put on her vision board at the start of 2020, chances are pretty likely she’ll get her way. Getting signed, featuring on a Tiny Desk Session with Oddissee — “it’s almost scary in a way,” she tells me, “to have all these things that I put on my vision board actually happen. It’s unreal, because it’s happening so fast.” In fact, she jokes that the only thing left unchecked is her wedding ring. “Still waiting for that, you know?”

For now, she’s married to her music, with a new acoustic version of “Good Love 2.0” out that showcases exactly what it is that makes her such an exciting artist. Starting off as a clear Lauryn Hill-inspired up-tempo contemporary R & B track, Ragu effortlessly segues into Tamil chants towards the end of the song, never making it feel out of place. Instead, it’s Ragu reaffirming her belief that she doesn’t have to choose between any two cultures, she can represent both, because she is both. If anything, fusion is clearly the future when done right, and Ragu definitely does it right.