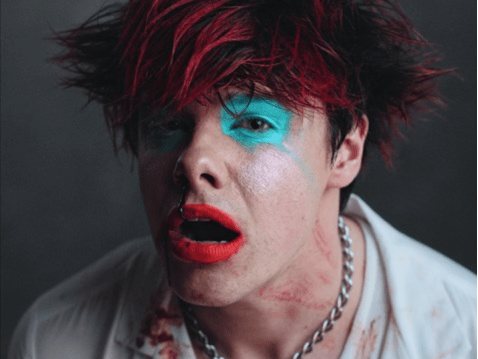 YUNGBLUD delivers yet another a powerful and otherworldly track

Despite all of the challenges that 2020 has brought for many artists, it seems that British rockstar YUNGBLUD (AKA Dominic Harrison) has by and large come out on top. As he continues his meteoric rise to superstardom, YUNGBLUD has witnessed remarkable success throughout the past month; with YUNGBLUD winning MTV’s Best Push Artist at the 2020 European Music Awards and receiving critical acclaim for his second full-length studio album, weird! Amidst this positively charged atmosphere, 23-year-old YUNGBLUD has released the final single off his upcoming album.

“mars,” the final single off weird! is a deceptively simple track, one driven by an acoustic guitar and YUNGBLUD’s commanding yet oddly melodic voice. Upon first listen, “mars” stands out as a unique track, unlike earlier releases “Cotton Candy” and “god save me, but don’t drown me out.” Granted, this break from tradition is a welcome change for listeners; with fans already lauding this latest track as another iconic cornerstone of YUNGBLUD’s discography.

Authentic, touching, and poignant, “mars” is a deeply resonant single depicting the story of a young trans woman whom YUNGBLUD met during the 2018 Vans Warped Tour. When asked about the woman and her connection to the latest single, YUNGBLUD spoke at length about their conversation. Stating in a press release, “She told me how her parents had come to the show with her. And how seeing our community helped them to understand that her coming out as trans wasn’t just a phase — this is who she really was. It made me cry to think that we could have that kind of impact and change people’s perceptions, just by being ourselves.”

YUNGBLUD has consistently been known for composing songs like this that champion critical issues and concerns for disaffected youth. “mars” is another one of those touching elegies, joining iconic cornerstones of YUNGBLUD’s discography like “Polygraph Eyes” and “hope for the underrated youth.” This recent single encapsulates the struggles of being an outcast and not fitting in to societies “boxes” – be it sex, gender, sexuality, or otherwise.

Visually, “mars” serves to further embody the challenges and struggles of being an outcast within a society hell-bent on cis-gender, heterosexual norms. In the music video, each individual is brutally accosted by unknown forces, all because they decided to exist and live their truth – it’s a powerful, gut-wrenching, and absolutely heart-breaking message. If the music video isn’t enough to bring you to tears, then the comment section should be the metaphorical nail in the coffin. Countless fans have left messages about how they can relate to the music video. From comments like “As a person that gets bullied for not ‘looking my gender,’ this song is relatable” and “As a trans person this song already means so much to me.” YUNGBLUD has once again encapsulated the emotions of a generation.

All in all, “mars” by YUNGBLUD has served to empower people to feel proud of who we are – that in 2020 and 2021 nobody should feel compelled to fit into society’s tiny boxes. Instead, YUNGBLUD encourages listeners to break out of these boxes and live their lives no matter how weird! they may be.