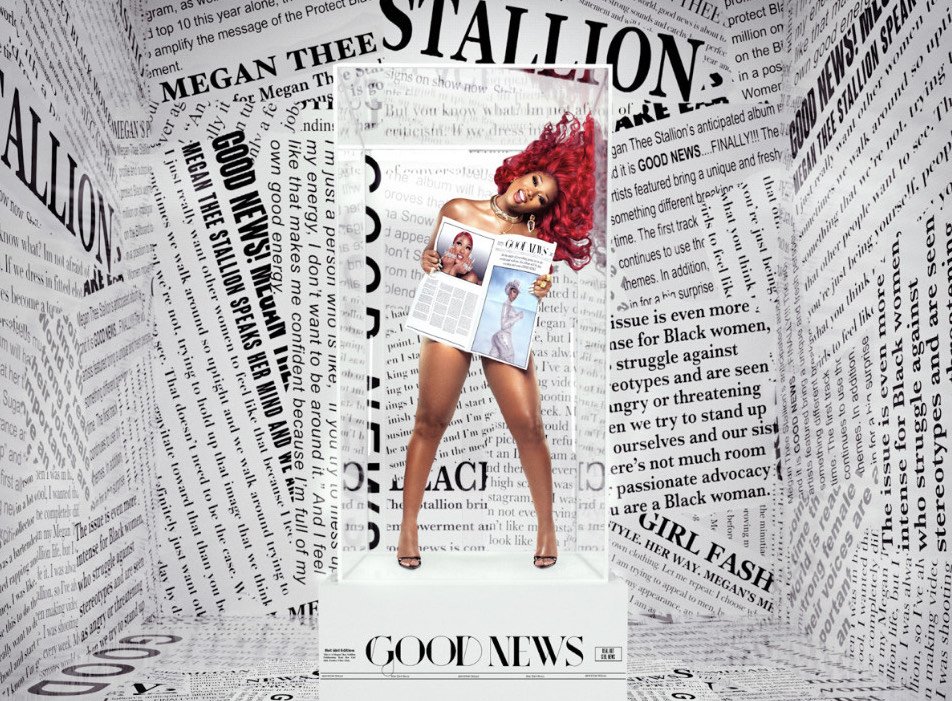 If her groundbreaking collaboration with Cardi B, WAP, in August wasn’t enough good news this year, Megan Thee Stallion also released her first studio album, Good News, with 300 Entertainment on Nov. 20 as well. The star-studded album is filled with the type of confident hot-girl energy that fans at this point in her career expect, with genius samples from classic songs and memorable bars to twerk to.

The Houston hottie this year caught the attention of many with two Billboard Hot 100 singles — “WAP” and “Savage” — covers on Time and Rolling Stone, and oddly enough even the attention of Republican politicians who shamed the rapper for her carefree sex-positivity this summer.

But Megan, whose real name is Megan Pete, also dealt with some pretty bad news in 2020 too. In July, she found herself at the center of a public disagreement-turned-violent with Canadian rapper Tory Lanez, who was accused of shooting Megan in the foot.

But it seems as though the fight with Lanez gave her ammo for her latest album release. In its opening banger, “Shots Fired,” she comes in hot with the same type of vigor that the Notorious B.I.G had in his 1994 song “Who Shot Ya?” which she samples.

When Notorious B.I.G dropped his song 26 years ago, merely months following rapper Tupac Shakur’s first run-in with gun violence, audiences and even Tupac himself questioned if the track was a diss. The intentions behind the groundbreaking hit were never completely clarified, although B.I.G collaborator Myrick said that the song had nothing to do with Tupac.

Megan, on the other hand, makes it pretty obvious that her words in “Shots Fired” are intended for the “goofy” Lanez, as she calls him. Although she never outwardly names him in the song, there are certain details that directly line up with allegations brought forward in their lawsuit. Her bars are clear and unapologetic in a manner that keeps listeners hanging onto every last syllable as though we’re sitting in a schoolyard watching her out-rap an elementary bully. She commands attention, addressing the situation in true hot-girl fashion.

Immediately following her strong introduction, Megan then moves on to deliver upbeat and confident twerk tracks about sex and finessing men that audiences love (and hate) her for. Skillful samples are her trade on Good News, and while I don’t particularly understand the tie that they have to her news media album theme, each sample gets listeners up and moving regardless.

In songs like “Work That,” she exists within classic Stallion territory: plenty of signature tongue-out “Ahh” sounds, dirty South references, and descriptive details of her moves in bed, all to the sped-up beat of Juvenile’s 2006 hit song, “Rodeo.” In “Sugar Baby,” which samples Webbie’s 2005 song “Bad Bitch,” Megan’s raw talent in lyrical humor is at the forefront with lines like, “invest in this pussy, boy, support Black business” within the very first verse.

The standout track, “Body,” proved to be the “Simon Says” of this album — better yet, known as the track capable of moving anyone to twerk at any point of the night. The body-ody-ody-positive anthem describes her loving relationship with her curves and was only made better with a surprise music video released Friday. In it, you’ll find sexy cameos from celebrities like Taraji P. Henson, Blacc Chyna, and Jordyn Woods.

I’d argue, though, that her consistent booty-popping mantra has made listeners more critical of when she veers off and tries anything new. At the first listen, “Don’t Rock Me to Sleep” sounds severely out of place. Her attempt at pop gives off the groovy feel of her successful feature with Phony Ppl in “Fkn Around,” but this time she’s doing the singing herself. Lyrically, “Don’t Rock Me to Sleep” isn’t the most innovative with its repetitive monotone chorus. While it’s clear that Megan isn’t a singer, her attempt at venturing into a new lane musically is refreshing and inspiring to see.

So although Good News doesn’t move any of her already-existing and stated conversations forward, it doesn’t really have to and I’m okay with that. I see the album as a rally of support from features like Beyoncé, 2 Chainz, Big Sean, Young Thug, City Girls, DaDaby, SZA, and more to celebrate Meg’s absolutely stellar year and tell her that we’re proud of her.

In 2020, Megan showed us that she can do anything, from writing Op-Eds about social justice in the New York Times to organizing college scholarships for young women. Good News is the fruit of this year’s trials and triumphs worth celebrating.