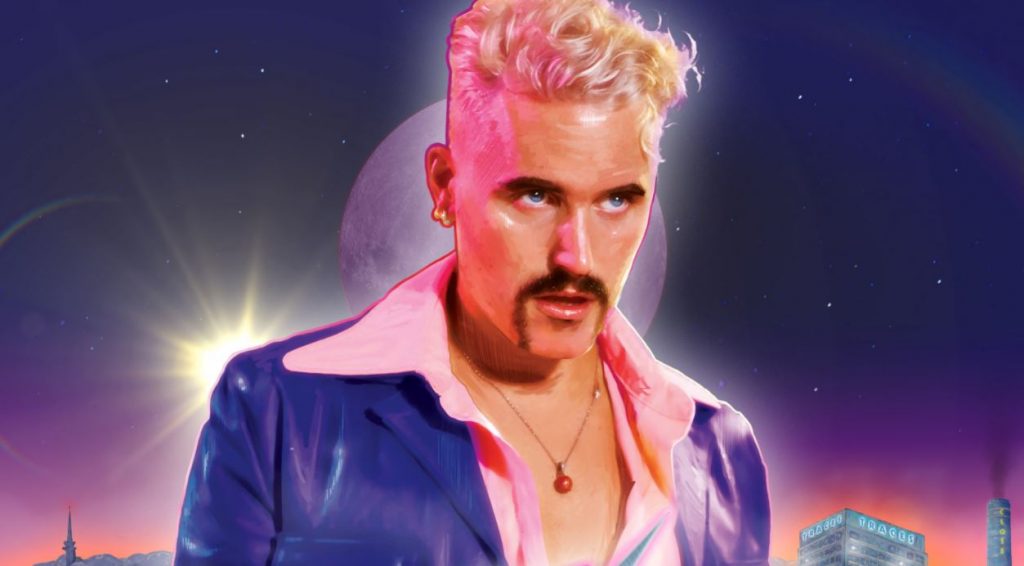 British singer Tom Aspaul released his long-awaited short film for his critically acclaimed debut album Black Country Disco– Black Country Disco: The Movie. The project was filmed over the summer months of 2020 in Wolverhampton and Birmingham by filmmaker Sam Taylor-Edwards.

“W.M.,” “01902,” and “Tender” were chosen for the 10-minute film, which is a few of the songs that capture Aspaul singing about heartbreak, loss, and acceptance. The record is about the ending of a five-year relationship in London and him moving back home to the West Midlands.

The disco-inspired album was sonically influenced by the late ’70s/early ’80s. Aspaul has made sure the aesthetic of the videos captured the essence of those eras by filming the nostalgia-tinged project entirely on film and VHS.

Firstly, congratulations on the album, Black Country Disco. You must feel so great about the response it’s had.
Thank you so much! Yes, it’s totally exceeded all my expectations, I feel like people are really connecting with it on a personal level, which blows my mind.

For the short-film, you chose to create visuals for “W.M,” “01902,” and “Tender.” Why those songs?
I feel like they encapsulate the story-arc of the whole album, from heartbreak in “Tender,” to relocation in “W.M.” and to come out the other side in “01902.” If I could have done an entire visual album I would have loved a video for every song!

Is there anything you hope people will learn or take away from the film?
First of all, the narrative of the album was really important to put across, this is a concept album and the concept really had to carry through to the film! I also wanted people to see the West Midlands and the Black Country in a new light, yes, it can be bleak and grey, but it’s home and it’s actually really beautiful and cinematic. We scouted some amazing architecture and viewpoints, I’ve said this repeatedly, but the film is a ‘love letter’ to the area. I also wanted viewers to get a sense of “the journey,” the endless drives up and down the M6 that seem to fill my time as someone who lives in the Midlands, but visits friends in London all the time. Lastly– I’ve never done a music video, so I wanted to show that I can dance and perform and be a “popstar” quite naturally.

You shot the entire thing entirely on film and VHS. Was that always the plan?
I guess so! It was definitely an aesthetic choice, to match the sonic references from the “disco era” of the 70s and 80s– but not so much it became a pastiche! Both film and VHS give everything a lovely texture and grain, I think they worked really well creating an atmosphere.

You worked alongside queer filmmaker Sam Taylor-Edwards to create it all. Did you make a conscious decision to work with someone who is a part of the LGBT community?
Yeah I think so, I’m sure there are plenty of talented straight filmmakers out there, but I know Sam’s references and taste level were so close to mine, it made communicating ideas so much easier, he got what I wanted without me having to explain most of the time and a large part of that was down to us both being queer artists.

It features two male dancers, Josh Lay and Omari Douglas, during “01902.” What made you want to cast them?
Have you seen them? I mean… jokes aside, Omari actually went to the same school as me and we’ve maintained a cute friendship– it was only a matter of time before we collaborated. We have so much in common, both (at the time) living in London, both from Wolverhampton, both gay, both performers, both avid Spice Girls fans, etc.

He has been a massive support throughout this whole album and I can’t remember exactly how it went down, but I just asked him if he knew any other dancers who’d be available (during a pandemic!) and he suggested his pal, Josh. I sent them a video of my choreography ideas, they picked it up in less than a minute and both were so professional and amazing on the day of the shoot – love them both.

For “Tender,” you appear with a bruised face. What was that supposed to symbolize?
So in terms of the running order, “W.M.” is set during the present time, “01902” is a flash-forward into a sexy possible future, before I crash and fall off my skates and all those old memories come flooding back. ‘Tender’ is a flashback that I’m having while lying knocked out on the floor.

It’s meant to be me on the eve of leaving London, before heading back to the WM. The bruises and cuts are quite an obvious metaphor for heartbreak, but also the feeling I was being chewed up and spat out of London. I wash them off, make the decision to leave and the rest is history!

How long did it take to film the whole thing?
Three incredibly long days and late nights! We actually did “01902” and “Tender” all on the same day and “W.M.” was split over two.

Did the ongoing coronavirus pandemic delay or restrict you in any way?
We filmed in mid-August, so it was actually during that window when things were relatively normal, I think we timed everything just right. The only thing that delayed us was me! I developed a humongous stye on my eye just before we were due to shoot. We had to push everything back by a week, which was actually a little bit devastating. The weather on that weekend was glorious, I was gutted. We made it work through the weekend after though, despite the sweeping rain! To be honest, doing the “01902” shoot in that Community Hall would have been murder during a heatwave!

You’ve spoken about releasing a remix album for the LP. Will there be a new mix for every song on the album?
Yes – Black Country Discotheque! Again, I’m trying to work exclusively with LGBT+ artists for the remix album – to showcase the wealth of talent out there, from the highest highs of pop music to people just starting out. It’s so exciting hearing the songs reimagined! So far I’ve got five out of nine remixes back–there will be a couple of new songs on there and one or two songs are getting two remixes!

Do you think there will be more videos for the album?
If I can pull it off, I’m hopefully doing one for one of the remixes, something light and fun! But after this short film, I think I’ve said everything I need to say visually. I’m not putting too much pressure on myself – I need to save some stamina for TA2!

What goals have you set yourself for the rest of the year?
My main goal is to finish Black Country Discotheque! To have it ready to go in the first quarter of 2021. Also before the New Year, I want to release the first song off the remix album (it’s going to be a brand new song!) and I’d like to get all the artwork and visuals ready. I also have to individually sign 100 vinyl, write 300 handwritten thank you notes, and perform the entire album at Birmingham Symphony Hall! Exhausting!