R&B superstar in the making Nevaeh Jolie is one to watch out for. The 19-year-old songstress, who recently joined the Def Jam team, is ready to make her mark on the music scene with her debut EP, Game On. With a bold image and a growing fanbase, you’ll be glad to have heard of Jolie from the beginning of her journey. Speaking with EUPHORIA., the singer told us about how she got signed with the major label, her dream girl gang collaboration, the success of her latest single, “Screwed Up,” and much more.

How long have you been signed with Def Jam and how did that opportunity come about?
It’s been almost a year now. I went out to LA on a management deal and about six months later, my manager you know we were making music, making music and then I ended up in the Def Jam offices playing the music I had been making. Everything just felt really good and they were like “this girl right here, she’s a rockstar” and I was like, “you’re right!” Def Jam is family now and everything just came together. It happened real quick.

For those who have just discovered you or aren’t familiar with your music yet– tell us how you got started in music.
Well, I started off writing when I was about eight years old. I started carrying around my song journals and I never really stopped. It started with poems, books. But really, songwriting was always my passion. Any time I would have an emotion where I couldn’t express it or really articulate it so somebody, I had to write it in my journal. That’s really how I started. Then once I moved from Florida to Jersey when I was about 10, the train and the city was right there. I started getting into musicals and girl groups and doing as many auditions as I could to get my experience up.

When you were auditioning for girl groups, did you always know you wanted to make it as a solo artist?
I definitely enjoyed my girl group days and I feel like girl groups are a whole different vibe. It’s like unity and your feeding off of other’s energy and everybody as a whole is working together to make songs and experience to come to life. I just appreciated the experiences that came along with it during shows. I had a goal since I was really young to be on my solo journey. As did a lot of the girls from the group.

Who would you say are your main musical influences?
It’s so hard, they really change every day. I take a lot of inspiration from Aaliyah of course, and P!nk, Avril Lavigne, Gwen Stefani, Michael Jackson, Prince. You know, those are the people I just really look up to for everything.

R&B music is known for its collaborations. Do you have a dream collaboration?
I definitely want to get a whole bunch of the real fire edgy R&B girls together and make some good music. I don’t know, Ella Mai, Kehlani, H.E.R., SZA. I feel like it would make a whole big thing if we all collaborated and did some like “Ladies Night” theme song

“Lady Marmalade” too!
YES! Oh my god, it would definitely pay homage. Aside from the girls come together, Bryson Tiller, Drake, those two are at the top of my list.

Your latest single “Screwed Up” has become your most-streamed song on Spotify really quickly. Did you have a gut feeling this particular track was going to perform really well?
Man, when I recorded this song, I said, this song is gonna change my life. I already feel it. And it’s on the radio and people are calling me from middle school: “are you famous?!” *laughs* I’m just like, oh my god, I don’t know! But I just know that my life is changing and I feel it in the universe. I love that it’s been a climb getting to this point and right now it feels like I’m on top of the mountains. “Screwed Up” is out and people are able to listen to it while they are driving to work and stuff like that. It’s really crazy to me that it’s out in the world. 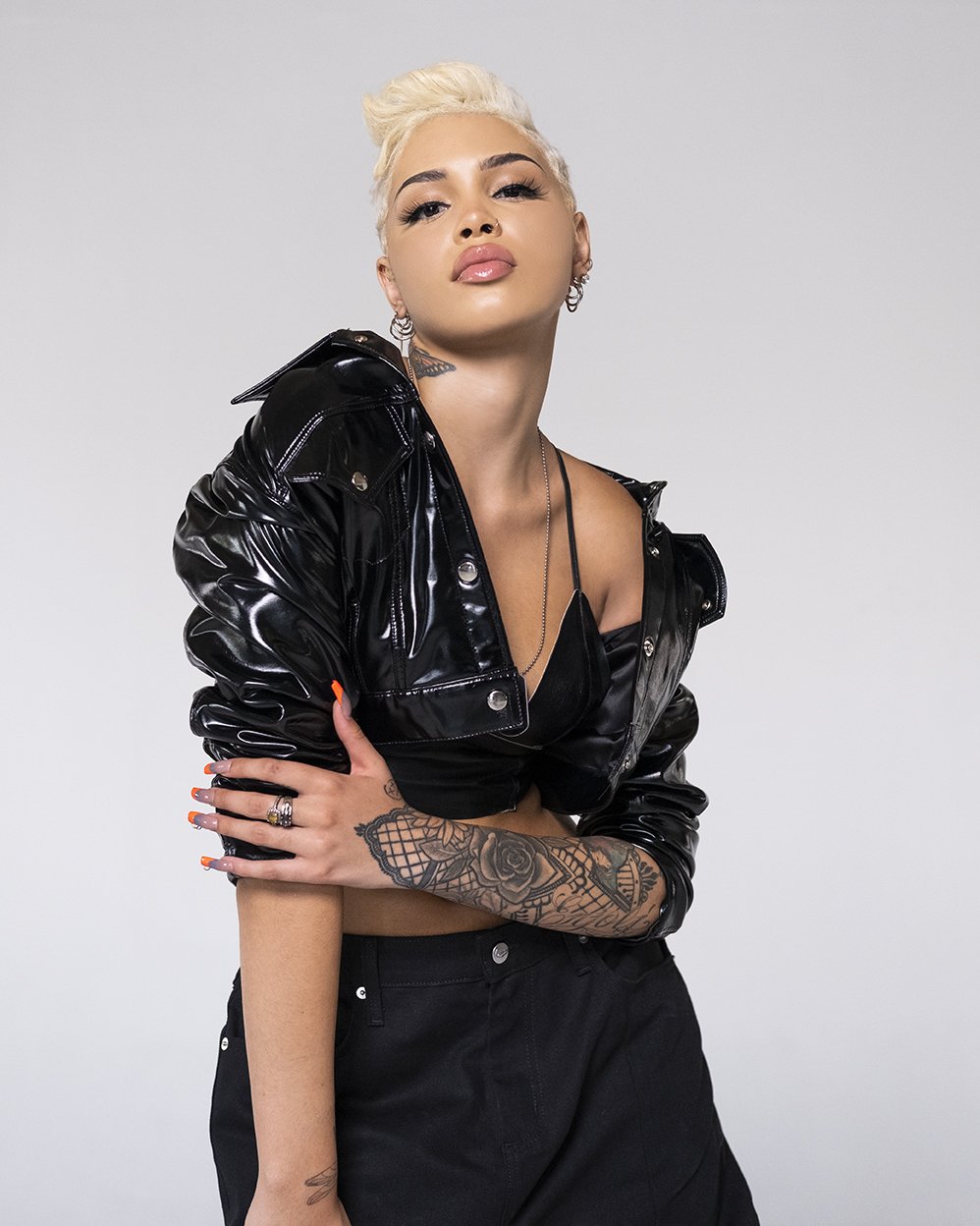 Are streaming numbers something you care about or are just focusing on building a fanbase?
I really want my fanbase to be very connected to me. I don’t know, I don’t really think about the numbers. I try not to get too overwhelmed, I’m not very good at maths, that’s probably why it overwhelms me. I just want the people who listen to my music to wanna dive into my life and really wanna step into my world. I believe there’s gonna be like a handful out of a bunch of people that are going to be really top players and will really get to know me. And I wanna get to know them. That’s all I really care about.

Did you have to change anything for the video or did everything stay as planned?
Yeah, there were little tweaks because we couldn’t go to certain locations. I feel like it worked out perfectly but there were definitely little tweaks. I made the treatment way before corona was even in the picture so just trying to make the vision come to life with all of these obstacles was a little difficult but the team that I have really made it happen.

Are there any more videos planned for the project?
Oh yeah, I’m really a visual artist. When I’m in the studio recording the song, I’m thinking of the video. I really wanna grow myself and get into video directing in the long run. I just try to be as visual as I can be. When I really make these songs, I wanna go somewhere and I want people to follow me. I have so many visuals planned.

Is an album in the works at the moment too?
Yes, I’m in Atlanta right now recording and working on the album. I’m always working.

You recently switched up your image. Was that planned to go along with the new music or did you just fancy a change?
I go back and forth between short and long hair. I feel like its definitely a different vibe. When I have short hair, I feel like more rockstar. I feel like I am a video game character and I am more avatar. Right now, I am in album mode and this blond short cut is staying for a while and I like it a lot.

I noticed when you had long dark hair, a lot of people compared you to Aaliyah.
Yeah, yeah. I feel like I was trying to get out of that vibe. I know she’s a huge huge huge inspiration to me with her sense of style and music. Even personality, I get comparisons and it’s just kinda like a lot. Being compared to her is just like woah, calm down *laughs* because I just love her so much. Eventually, I’m going to go back to my long hair but right now, I’m bold and I’m an avatar, I’m a video game kid.

2020 has been a crazy year. Are there any goals you have set yourself to achieve by the end of the year?
I’ve always been a post-it note dream board goal kind of person. Everything, I have to always write it down. For some reason this year, there’s been a lot of going with the flow. A lot of things are just changing and we have no control over it and it’s like when you try to have the control, it’ll drive you crazy. So, for now, I’m just going with the flow and trusting the universe with the energy I’m putting out. I feel really good about it. It’s kinda weird to me because I usually say I have to do this and that but this is a really calm flowing feeling but I get that it’s 2020. I feel like for 2021, it’s going to be more structured. But for this year, with everything that’s going on in the world, I just wanna be happy.