Marina Kaye has redefined what it means to be a talent show winner. A rising star who began her journey after winning France’s Got Talent, Kaye is now 22 years old and writing the story of her own life for all to listen to. Her third studio album, Twisted, is an authentic, dark pop celebration of where she has been and where she is going. Including her signature clear vocals and flair for electronic elements, Twisted promises to be one of the most introspective albums released this year. Kaye sat down with us to talk about the lonely side of instant fame, writing as her therapy, and being a voice for her fellow black sheep.

You began your career by winning France’s Got Talent. Do you still remember the moment of winning?
I don’t actually! It feels more like a dream or something that happened 100 years ago than anything else. I don’t think I even realized it when it happened at that moment. You’re so nervous when they call you, and when they called my name, I was like, “Ok, now I have to pretend I’m shocked” because I couldn’t even process the whole thing. It was just so surreal, I could not believe it.

How did your life change after that?
I didn’t really change, I just wanted to go back to school because I had no idea what I was supposed to do. I was 13 back then, and I just thought ‘Why would I be interesting at 13 years old?” I mean, I had a story and things to say, I was just too young to tell it. It was better for me to wait until I had more life experience. I just went back to school and continued singing for myself.

When you returned to school, did people recognize you?
It was a weird phase. You have the people using you, you have the people hating on you because you won the show. It was so hard, and that’s why I was homeschooled after the show. People just changed overnight, and I didn’t have any real friends. I was on my own, and I was feeling really lonely during the whole process of the show and afterward. People couldn’t understand the pressure, they were just judging, and I felt very lonely.

How did you get through that?
I was writing a lot. It was really hard, so I was writing and writing and writing nonstop. That was a good thing because I met my producer a year later. He asked me if I could write songs, and I told him that I could write things about my life. I sent him, like, 60 pages of how I felt. It was just the compilation of the entire year of being on my own and all by myself and struggling a lot as a teenager.  I didn’t even know it, but I was writing my debut album.

How has your sound changed from your debut album to Twisted?
Yes, a lot has changed. When I got signed to my first label, I remember I wanted my first album to be filled with real instruments. It was shocking because I went in and they told me ‘Here’s how we make that with a computer!’. It was really hard for me to understand that people were not listening to real music and real instruments anymore. I used to be all about pianos and cellos and everything, and now I am much more of a… I wouldn’t say a “Logic Pro Tools” girl, but I like using the tools that we’ve been given. Now there are so many tools and crazy different sounds that you can use in your music. That’s what I’ve been doing with Twisted. It was awesome because I made a country song, and then I made a very urban song, and then some very pop music; I was able to explore a lot more, which is something I was not ready for in my first two albums.

You’ve written with Jessica Agombar and David Stewart, who are extremely gifted musicians. Is there a difference in your songwriting process when it is just you versus when you have collaborators?
There is no real difference because I have never written an entire song by myself. I get in the studio with so many notes on my phone, and I know what I want to talk about and write about on that day. I’ve always been writing with one or two more people in the room. It didn’t really change with Jessica and David, but they are the best team that I have worked with. We had a chemistry that was insane, and I never ever left the studio without a song. I am in love with every single song we made together, which is crazy.

Sometimes it doesn’t work. Sometimes you get in the studio with people who you don’t know anything about, they don’t know anything about you, and you have to tell them all about your life, and the chemistry is not there and it’s not working. It’s just so hard, I mean, you feel like a piece of shit when you leave the studio. I cry every time it happens. Jessica and David were like angels to me. We wrote Twisted in such a good mood, we were laughing all the time, yet we were so professional. It was just perfect. 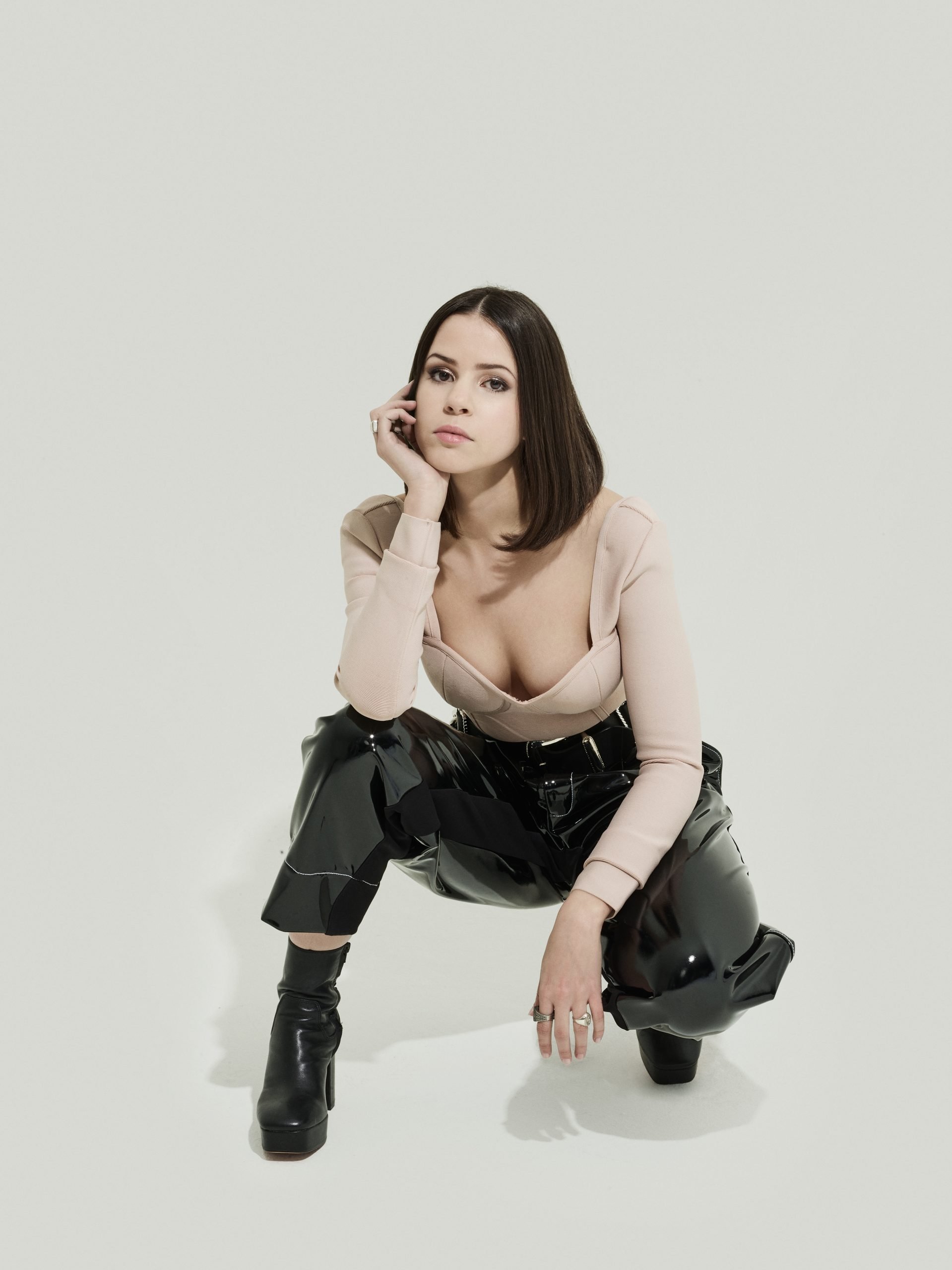 How did you meet Jessica and David?
I was having dinner in LA with my producer, and we met a guy who was their publisher at Sony ATV. This guy said “Oh, you have to work with David Stewart, he’s the next Max Martin,” and I was like “Ok, cool, great! I’d love to!” I thought it wouldn’t work because so many people in the industry say “I’ll hook you up with them” and they never do. A week later he called us and told us he set up an appointment for us to meet when I was in London. I met him in May of 2018, and I first met him, at his home in his bedroom with my producer, and it was great. We set up a session and we thought we’d try to do something since he had listened to what I had done previously and he loved it. I met Jessica a few days later, and we started writing together in June of 2018.

Which musical artists have inspired you/your sound on this album?
I think the only artist that I was listening to when I made the album was The Weeknd. I really love him. I love the darkness and edge to his sound, but I really wanted to be myself, write stuff that I have been going through, and find my personal sound.

You’ve often spoken about being a voice for people who are unique and being proud of themselves, why is that so important for you?
For my entire life, I’ve felt like the black sheep in my family and my friends. I’ve always felt this way, so I just figured out I would be the girl who is using her voice to give other black sheep a voice. Not everyone has access to the media or can share what they think or how they feel, which is why they feel so lonely or depressed. I just figured that it would be my job to do it. As a singer, when you’re talking about your life and personal experiences, it’s not just about music, it’s about healing people, really. Music saved me in so many ways, and when I became myself as a singer, I wanted to help people the way other singers helped me throughout my journey. I feel like it’s our mission to talk for those who don’t have voices.

I know you’ve been able to work with legendary artists such as Sia and 30 Seconds to Mars; Who has been your favorite to collaborate with and why?
Honestly, Lindsey Sterling has been my favorite! I was a huge fan of hers. I was listening to her entire album during the process of making my debut album. When I got signed to my first label, Capitol Universal, I saw her CD on my project manager’s desk. I asked her “What’s that doing here?” and she said, “We just signed her!” I asked if I could collaborate with her. So, I started by opening for her tour in France for five dates. I met her, and she was just the most amazing girl in the world. We just figured it would be great to do something together. We made a song called Sounds Like Heaven, I did vocals and she played the violin on it, and it was great! She was my idol, so it was very special.

You’re just beginning your career in the UK, and have only written your songs in English versus your native French. Talk us through the decision to make music in English.
From the very beginning, when I was a little kid, I sang in English, and I listened to English artists and music. I’ve always been a fan of the culture, I love the way they write songs and use their voices, it sounded so easy to me. I really wanted to be a part of that. I was lucky that I met someone that would help me do it because it’s really rare for a French singer. You’re usually signed to a French label and they want you to sing in French because it’ll be easier to put you on the radio. It’s so hard to put an English song from a French singer on the radio. For my first single, it took us ten months to get it on the radio. I was so depressed, I thought it would never happen. I was very lucky to meet people to help me do it and I always wanted to sing in English. It’s also easier for me to express myself in English, and I thought the tone of my voice sounds better in English.