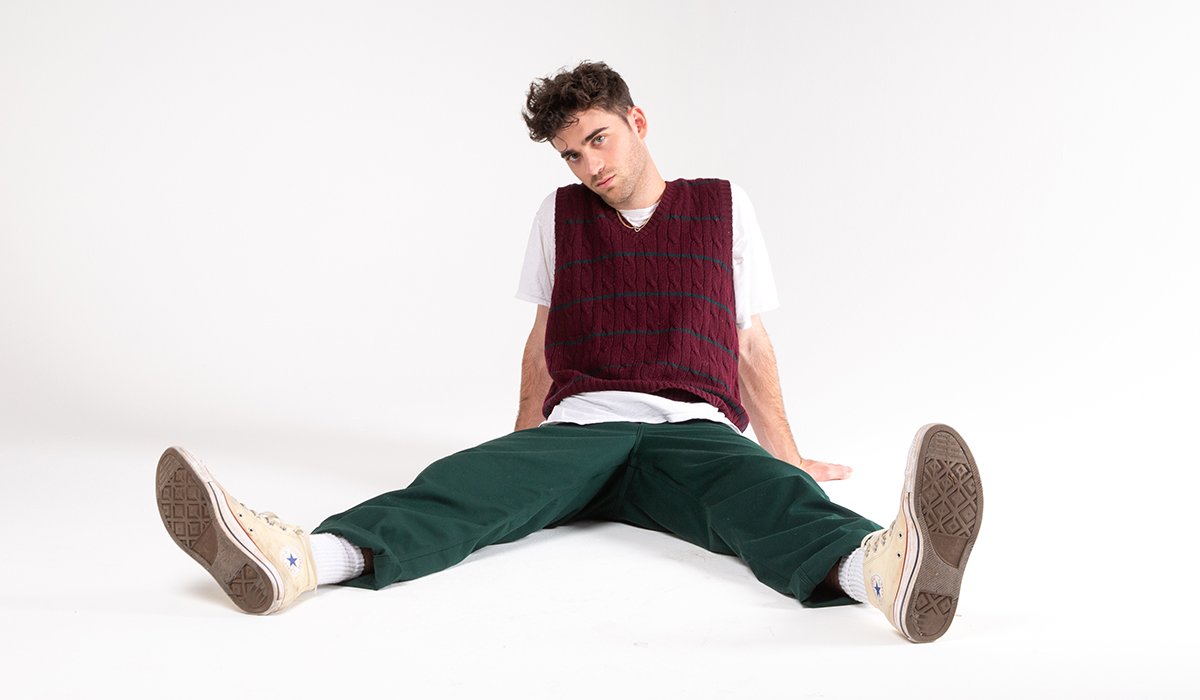 Chicago native Alexander 23 has been making music since the age of 12 and has made quite the name for himself over the past year. In 2019, he released his debut EP, I’m Sorry I Love You, and has continued to wow fans with his versatility. Earlier this year, the 25-year-old released his biggest song to date, “IDK You Yet,” which boasts more than 100 million streams.

Alexander is currently promoting his latest release “Brainstorm,” which is already racking up the streams. EUPHORIA. got the chance to speak to the talented musician via Zoom about the new track along with what else he has planned.

Congratulations on your new single “Brainstorm.” The song helps shine a light on mental illness. How long ago did you write this song?
Not terribly long go. I would probably say two or three months ago. I think a lot of artists write and then kinda sit on songs. I’ve just found that that’s just not my process. But I will say that it has gone through a lot of iterations in its short life. This is probably the fifth and final production version that’s out in the world. So, it was certainly an intense process.

Were you nervous about releasing it as it’s such a personal song?
It definitely felt different from the other songs. I don’t know if it was nerves as much. The more emotionally driven part of the process is the actual songwriting process, and then once it exists it feels more of a tool to connect and help people. This song, more than any song I’ve written or been a part of, still kinda hits me the same way every time I hear or play it, which is definitely a new experience for me. I think that’s kinda a result of how emotionally intense it is.

You released a T-shirt for the release and donated all the proceeds to The Loveland Foundation and American Foundation for Suicide Prevention. Did you already have a relationship with those charities prior to the release of the song?
Yeah, so the AFSP, I had done a T-shirt for them last year and it was such an amazing experience. I was so grateful people actually bought it. This time around, I knew I wanted to support them again. I have some friends that have been posting about The Loveland Foundation and I had reading about them and all the incredible things they’re doing. I felt it was important to diversify who we were raising money for a bit. I’m super happy with the two organizations we’ve chosen.

I saw you re-posting lots of people wearing the T-shirt on your Instagram story.
Yeah, totally. I’m so grateful to have this platform. Well, first of all, to even make a T-shirt. Not everyone could even make a T-shirt and sell it. It’s not the most simple game in the world. I have the platform and have the infrastructure. I care about these issues. There’s not really an excuse not to do something about it. To be able to kinda to do it in conjunction with “Brainstorm” was really special but at the same time, I certainly desired some separation between the two. The song is obviously to help people but also to help me. The T-shirt has nothing to do with me. My name isn’t written on it. It’s on a different part of my website from my other merch. It felt important to keep that 100 percent a more charitable opportunity.

Have you shot a music video for the song?
So, we have not. I’m not going to shoot a conventional one for this. I’m doing one that’s a bit different and fan-driven. It’s not done yet. The song to me speaks to a greater community and people going through a similar thing. Kinda similar to the T-shirt, I don’t want to make the video about me. I didn’t want it to be vanity driven like beauty shots of me walking around to this heavy subject so I’m doing something that’s going to involve people who are going through or lost someone who has gone through the stuff the song is about.

Along with “Brainstorm,” you have released a number of other songs — “IDK You Yet,” and “Caught In The Middle” — this year that appear to be more stripped back production-wise in comparison to songs like “Loving You Gets Hard” and “Girl.” Is that a good indication of what your sound is heading into or are you going to keep switching it up?
Yeah. Great question and this is honestly something I have been thinking about almost non-stop for the past couple of months as I’m getting back into writing mode. I think the first half of the Alexander 23 catalog is super lyrical but it’s definitely production-driven as well. As for the three songs you mentioned, the pendulum kind of sung back to the other extreme and it became extremely lyric-driven and extremely stripped and more about the pure songwriting. I think moving forward I’m looking to find the balance between the two. I’m ready to kind of wield my songwriting and production powers a bit more responsibly and more balance.

“IDK You Yet” has been streamed over 100 million times on Spotify. Did you have a feeling that song was going to blow up or did it come by surprise?
I think a little bit of both. I’ve been making and putting out music long enough to not have enormous expectations. What I will say is, certain songs you write and you just know that you believe every single word of them. For me, after I finished writing it, I just knew it felt incredibly special to me. I have found that that’s a pretty good indication of whether people are going to like it a lot or not. At the end of the day, people just wanna believe what they’re hearing and if I don’t believe it, how can I expect anyone else to. Specifically, I believed every word of it, every melody, every production element. I felt pretty good about it coming it but who could expect the reception it got and the number of people that connected with it. It’s been out of this world.

How important is making playlists and streaming numbers for you at this point in your career?
It’s important in that I don’t have it for granted and that I’m extremely grateful for the numerical support. At the end of the day, I’ve never seen 100 million of anything in my life. Maybe grains of sand at the beach but you can’t actually count those. For me, the biggest reward of this career if you wanna call it that, I just call it having fun, is playing live shows because if I perform to a thousand people in a room, those are a thousand faces I can see. I’m extremely grateful for it but more than anything, I just love connecting with people in person.

Despite having your own studio in Los Angeles, has the pandemic slowed down your creative process in any way or motivated you more?
I think more a little bit. I’ve been motivated to get into the studio but once I’m in the studio I’ve found it’s become a little bit harder to write. Literally, this past weekend was the first weekend I felt creatively super good in a really long time and it felt amazing. I’m someone that writes about my life and these extremely real things that have happened or are happening to me in excruciating detail at times. To not be able to go out and have those new experiences and get that new inspiration has definitely been difficult.

Last year, you released your debut EP. Do you feel like you were still experimenting with your sound when creating that project?
When I listen back to it now, I can hear myself narrowing in on things that I’m a lot better at now. Having said that, it’s so beautiful for me to be able to listen to it and travel back in time to the headspace I was in when writing it when different things excited me and didn’t know other things yet. I think it’s beautifully perfectly imperfect is the best way I can describe it.

Is the plan to release another EP or are you going straight into album mode? Or maybe even just releasing singles for now.
To be totally honest, I’m not sure. I’m back in a writing mode and I think the writing will dictate the presentation. I don’t really have a preference. I just want whatever is best for the songs, the best way I can put them out and get them to most people.

I feel like there’s less pressure for artists to release an album these days, you can kinda do what you wanna do.
The only thing that’s pushing me to do an album is almost the historical-artistic desire to be an album artist. So many of my favorite artists operate on an album cycle basis or did when they were active. I definitely desire that at some point whether that’s in the next six months or in the next year or two. I just don’t know yet.

Are there any artists influencing the new material or do you try to not listen to too much music when creating?
Funny you ask because I have been in that headspace and mindset for a while now and I’m trying to break out of it because I almost feel like I’ve gotten too comfortable in my own process and I know how to write an Alexander 23 song a little too well. I’m trying to get back into that more exciting experimental phase again and I find that listening to other artists who I respect and want to emulate in one way or another can be very helpful whereas in the past it was really hard to listen to other artists when I was in a creative mode.

Have you set yourself any goals for the rest of the year?
Honestly, I’m just grateful to be feeling hyper-creative again and I wanna harness and take advantage of it as much as I can. The past few months have definitely been difficult for me personally and creatively, feeling a bit stuck. Beyond music and songwriting, I just want to take advantage of every second in a way that I haven’t for the past few months.

I assume you would have been on the road touring a lot if there wasn’t a pandemic.
Yeah, we had to cancel a bunch of shows which literally turns my insides out. I just love touring and playing shows so much that it really hurts not to do that. I think my also music really benefits from being contextualized live. It sucks but it’s also really motivating. I was going do my first US headline tour this fall and I know the venues I was going to do. So, it’s motivating because I can make those venues two or three-times bigger if I’m honest in my music and write good songs.