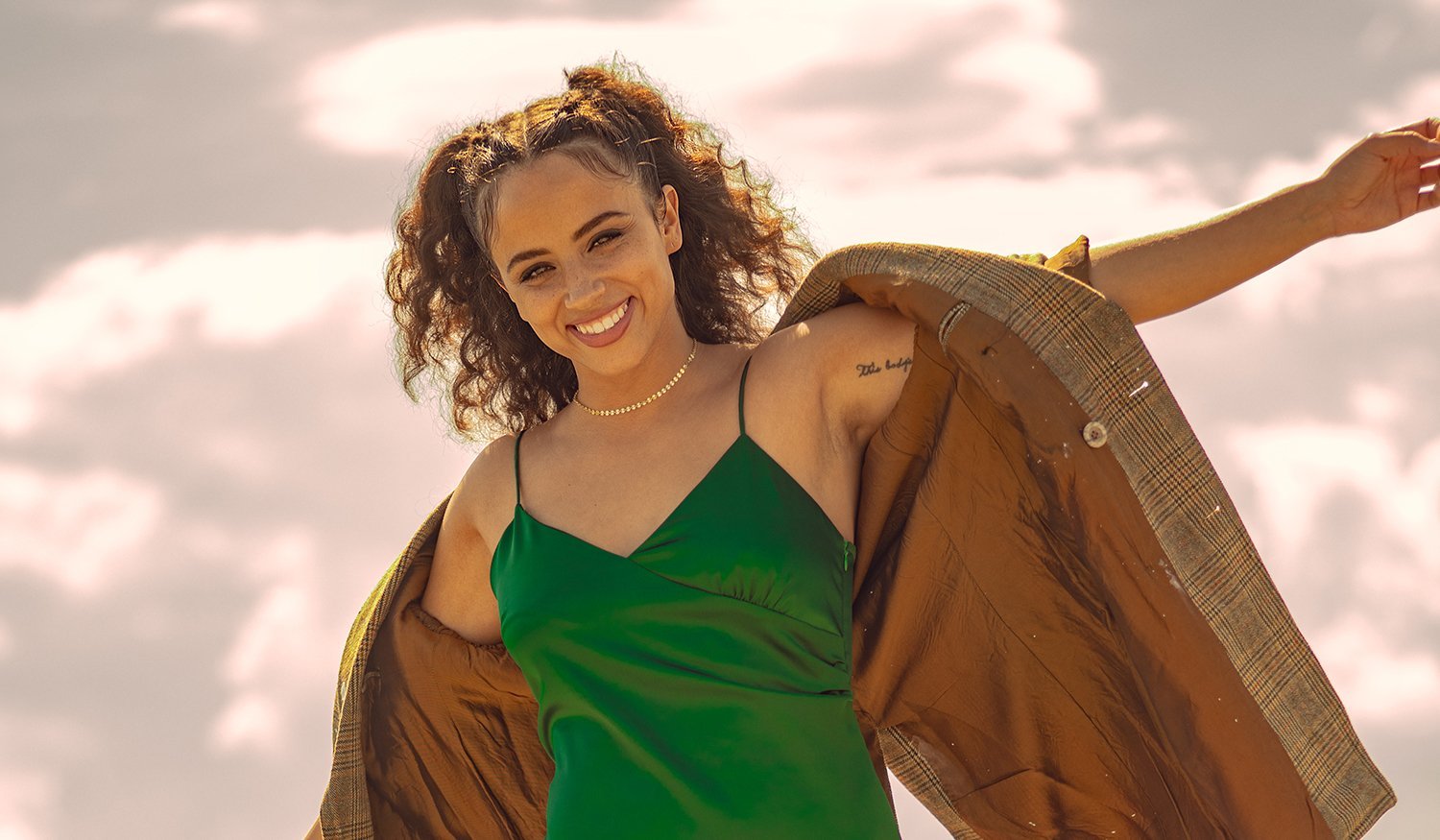 Kiana Madeira stars as one-third of the shop-lifting trio in Netflix’s Trinkets. As Moe Truax, Madeira carefully plays this complicated role of a high school girl with endless layers. After meeting two teens her age in a Shoplifters Anonymous group in the first season of the show, she connects with them and reveals so many difficult truths about her life. Together the three of them deal with some of high school’s toughest situations.

Up next, Madeira will take on Netflix’s film trilogy Fear Street, based on the books by author R.L. Stine. Those movies, which were pushed back due to COVID-19, won’t land on Netflix until 2021, but in the meantime, we caught up with Madeira to chat about Trinkets — including how the series ended — and find out what other nostalgic shows she’d like to see brought back.

To start, what attracted you to Trinkets and the role of Moe specifically?
Well, I’m a huge fan of Kirsten Smith who wrote the Trinkets book. She also wrote 10 Things I Hate About You and Legally Blonde, and I loved those movies growing up. So that was a huge drawing factor for me. And then I read the first script and I was really interested in the fact that I couldn’t really gauge the exact genre of the show. And I think a lot of coming-of-age stories are similar in that way. There’s a lot of heart, and there’s a lot of comedy and I love playing with those two dynamics.

In the second season, Moe has a bit of a hard time with her dad and with being blackmailed at school — how was it to immerse yourself in those more difficult storylines?
I think it’s so very artistically fulfilling. I’m really grateful that the writers gave us so much to deal within just a matter of two seasons. Because I really do think it authentically represents the world that we’re living in. It doesn’t really matter what age you are, humans go through a lot. So I’m glad that I was given the opportunity as an actor to play a character who really did go through so much in such a short amount of time. And also the actors I was acting alongside, like Andrew Keegan, who plays Moe’s dad, is so generous and so present. So really all of those vulnerable scenes and emotionally challenging scenes that I have were such a gift.

I loved the message at the end of the season about standing up for yourself and Tabitha taking charge of her assault. It was so impactful. How was it filming that?
The ending was so beautiful and so empowering for sure. It was interesting for me to play Moe because even in the second season, we can see how Moe starts to learn and understand that it’s not her story to tell. It’s Tabitha’s story. Everything Tabitha went through, it’s up to Tabitha, and whether or not she wants to come forward and do these things. So it was really nice for me to play a character who was just so supportive in that way. And because when we see our friends going through things, we automatically want to take it into our own control and help solve the situation. But sometimes the most important thing about friendship is allowing people to grow, and see how they want to handle things on their own. So I think that the last episode really did such a great job at highlighting that. These three girls just have each other’s backs, no matter what.

So if the show had gotten a season three, where do you think Moe would have ended up?
Oh, that’s such an interesting question. We do see that flash-forward in season two, at the end of season two of Moe in the MIT sweater. So I think that Moe definitely was heading on a path of academic excellence and really just pursuing that. This makes me really happy because she’s so smart and she also loves getting into trouble, but I think that Moe would have been focusing a little bit more on her studies. And as much as I love Moe and Noah together, I think that it’s important for Moe to even explore even deeper her relationship with herself. And maybe that could mean for her being single and seeing what self-love really means to her.

She is such a cool character because she was a little bit of a bad girl, but she was so smart, but also romantic.
So many different layers, like vulnerable at times, and then really guarded on top at other times. Very funny and other times not in the mood to crack jokes at all. So as an actor it was just such a roller coaster and so fun to play.

Were you able to celebrate season two at all? It’s been a weird year with not being able to do anything. So were you able to commemorate season two coming out at all?
Well, we definitely celebrated the wrapping of shooting season two, which now in hindsight I’m so happy that we did that. Because there was before all of this really started. So it was in Portland when we wrapped season two, and we all had a wrap party and it was really beautiful. As far as the show coming out, I’m here with my fiance, so we watched it together here and it was really low key, but I love that too. So I’m glad we got a little bit of both.

Now you have Fear Street coming up. Tell me about getting into that project.
I filmed that last year. We shot all three movies back to back to back, and that was such a wild adventure. I can’t speak about the movies too much, but I can tell you that I’m really excited for people to see them. I think they’re so different and they’re very innovative and so entertaining. And there are three different movies slated to be on Netflix summer of 2021. So I’m really excited for people to see them.

Were you much of an R.L. Stine fan growing up?
Yes. Oh my gosh. I think my generation was more into Goosebumps. But I am familiar with Fear Street as well and have checked out some of those books. They’re a little bit targeted towards a little bit of an older audience. Like if I was 11 reading Goosebumps, those were probably like 15 or 16-year-olds, I think. They’re a little bit scarier, I think. But yeah R.L. Stine, he actually came to set one of the days when we were filming, it was a little bit surreal. I was like, totally fangirling a bit.

Did he give you any insight into the books and when he was writing or anything that he wanted to see in the films?
Honestly, he’s so cool and so collected and really quiet. No, he really didn’t give us much of that, but he told me that he thought I was perfectly cast and that was the best compliment that I ever received. He was kind of quiet. And I think that he thought it was really cool being on the set too. So yeah. It was such a cute and great experience.

I love that someone who’s so iconic, especially to our generation, is super chill.
Yeah, exactly. Super chill and super humble. I was like, this is inspiring. I’m going to take notes. I’m very inspirational in that way.

So you said you read Goosebumps a little bit — what else were you into when you were younger? So many things are making a comeback these days.
I love ‘90s sitcoms and I think sitcoms have kind of taken a different journey these days. But if we could get some shows back like Fresh Prince of Bel-Air, I loved Fresh Prince. That was my favorite show growing up. And it kind of makes me sad too in the climate we’re living in because of live audiences, who knows if that will be a thing anymore. I really hope so, I feel hopeful about that.

I also loved spy movies, like Spy Kids. When I was a kid I really thought I was a spy. I always traveled with a little journal and I just spied on my family and wrote down notes.

Are you into the ‘90s music at all?
I was born in 1992, so I think it was maybe the early 2000s mostly. The first concert I went to was Backstreet Boys. I loved Backstreet Boys. I also loved the Spice Girls and there was a band called O-Town. I don’t know if you remember, there was a show called Making the Band…

Oh my God. I’m a huge O-Town fan.
I loved O-Town so much. I also went to their concert. But they didn’t last too long in the spotlight. But when they were around, they were great.

So what else do you have going on or what else is coming up?
Well, I have Fear Street coming out next year. Other than that everything’s a little bit unpredictable these days and I’m kind of focusing on doing some writing of my own and just watching a lot of movies, shows, spending time with loved ones, and just kind of taking everything day by day. And practicing gratitude and stillness, which I think is important. And just focusing on being healthy, mentally, physically, and spiritually.

That’s so important this year because it’s just been such a weird year.
This year has been crazy for sure. So I think it’s important for everyone to just tune in to themselves, and how they’re really feeling about things that are going on. And yeah, it can be a time to really become numb or it can be a time to really check-in and become present. So really trying to do the latter.

That’s true. That’s a good piece of advice.
Thank you. I try to remind myself that.