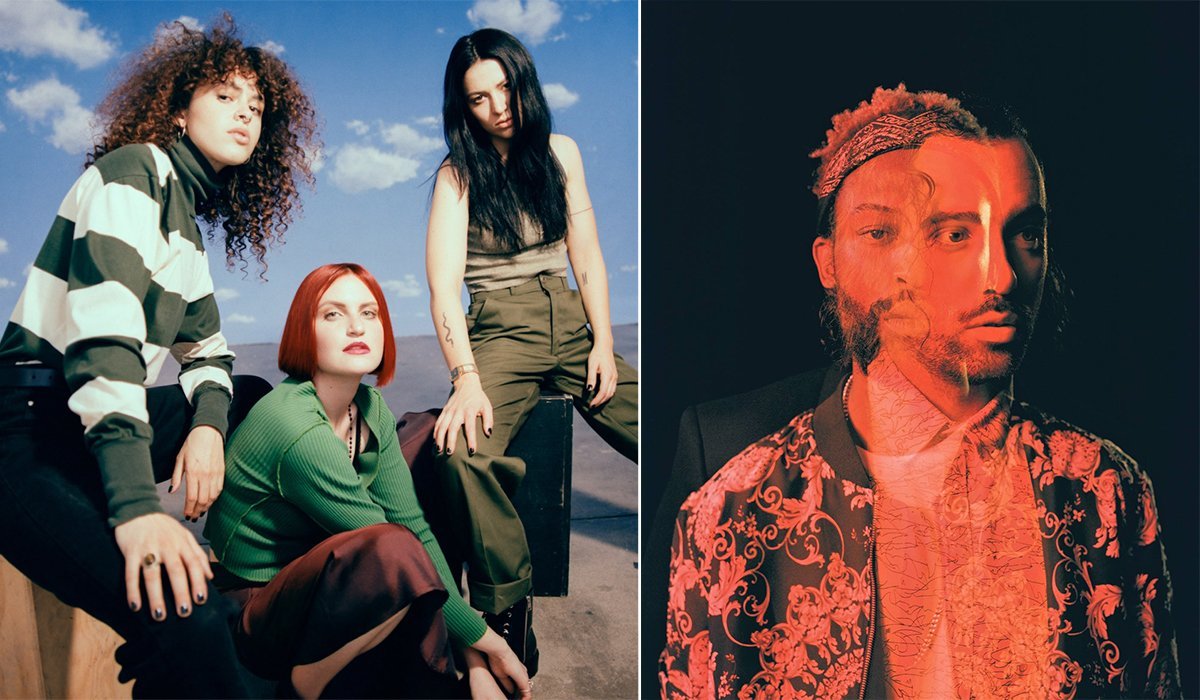 MUNA and The Knocks are looking for a new normal in this world, and it starts with their collaborative single “Bodies.” The chill anthem, with an even chiller video, came together just as the world went into COVID-19 lockdown and just before society — especially the US — was turned on its head. I caught up with all the members of both bands to chat about the story behind “Bodies,” what it was like to make a music video during lockdown, and where they see this world going next.

“Bodies” started with Ben Ruttner and James “JPatt” Patterson of The Knocks. “We were heading out to LA to work on our record and writing with some artists out there. We requested to get in a room with MUNA; we had a couple mutual friends and kind of knew each other through the grapevine,” Ben said of how the song began. It was The Knocks who came up with the beat, and they knew that if anyone was going to write the perfect lyrics for it, it would be MUNA.

“I’m still figuring out how to do co-writing sessions and collaborations,” Katie Gavin of MUNA shared. “It usually just ends up being [Naomi McPherson, Josette Maskin, and me] but we were all excited about the same beat, and I just thought it would be really fun to skate to.” So that’s pretty much exactly what Katie did. She got the instrumental and plugged it into her ears while she rollerbladed along the LA river the next morning, letting the lyrics come to her.

The bands made magic happen when they put all the pieces of the song together but quickly had to separate when COVID-19 lockdown rules were put into place, forcing them to finish the collaboration from opposite ends of the country. Both bands, however, were used to collaborating from afar and were able to lock up the rest of the track. The video, however, was another conundrum.

The mesmerizing video for the song was filmed during lockdown and only features Katie. Quite appropriately, it features her skating alone through Pasadena, CA, while the song plays around her — exactly how the song was born in her head. Coincidence? Maybe a bit. “I think [Katie] said something about skating in the video, but we assumed it would be an element and we’d all get to be in it,” Ben said. “But because of this time and circumstances, it does a really great job of capturing the energy right now. The song’s very escapist and a way to remember past times and memories of times when you were out celebrating or partying or enjoying space with people crowded everywhere.”

The video and the apropos song put off the right vibes for a world longing for some aspects of the way things used to be but also caught up in feelings of wanting a change for the future. It’s that feeling that both MUNA and The Knocks are carrying with them through the release of this song and beyond. “It’s this feeling for all of us, just being in high school and going to house parties or going to dirty basement shows, like garage shows,” Naomi said of the song and video. “Katie and I lived in a party house in college and we would’ve played some of our first shows in this dirty-ass horrible garage in that house and you were getting literally electrocuted by mics because nothing works. The video is that DIY vibe.” DIY is exactly what Ben and JPatt envisioned when they showed MUNA mood boards for the video, and the simplistic nature of the video that gets you transfixed on Katie’s skating immediately nails that concept.

MUNA and The Knocks may have figured out how to put a song and video together while under lockdown, but the questions of if and how and when to release it were a whole other problem the bands ran into. “I think there was a time where it was just really clear that it wasn’t time for us to focus on this,” Katie said. Instead, the bands focused on using their platforms to stand up against the systemic racism that’s so apparent in the US and take part in protests. “But we are musicians, and we’re activists, and we don’t want the world to return to regularly scheduled programming. So we don’t want to wait until that happens to release something.”

It’s the bands’ dedication to their art, along with the understanding that this song can have real meaning for their fans at a time like this that drove them to put the song out into the world today. But they’re doing it knowing that it wasn’t necessarily the “right” time because there’s no such thing and there’s no “normal” anymore. “Everything has changed,” Naomi said. “Things going back to normal is a failure on everyone’s part, in my opinion.”

“Bodies” yearns for a different time, perhaps a simpler time. A time, Ben said, that he truly misses. “We’ve done all the dirty work as a band, and to me, that’s what this song is reminiscent of. At times, while you’re doing it, you’re like, ‘this sucks; I hate playing this show where my speakers aren’t working.’ But in hindsight, you start to miss it. Especially now when you can’t play any show. I would pay a lot of money to play in some dingy old basement with no monitors and just have it sound terrible right now.”

The new song may have taken on a whole new meaning while being created, but at its core, it’s deeply MUNA and very much The Knocks. Crafted from The Knocks’ impressive beats and the relatable lyrics MUNA is known for, “Bodies” will be the song you want to cling to as the world keeps spinning. It’s that little bit of hope, that little bit of love, and that little bit of spirit to keep on going. Like Katie said, “That spirit is very much alive right now.”