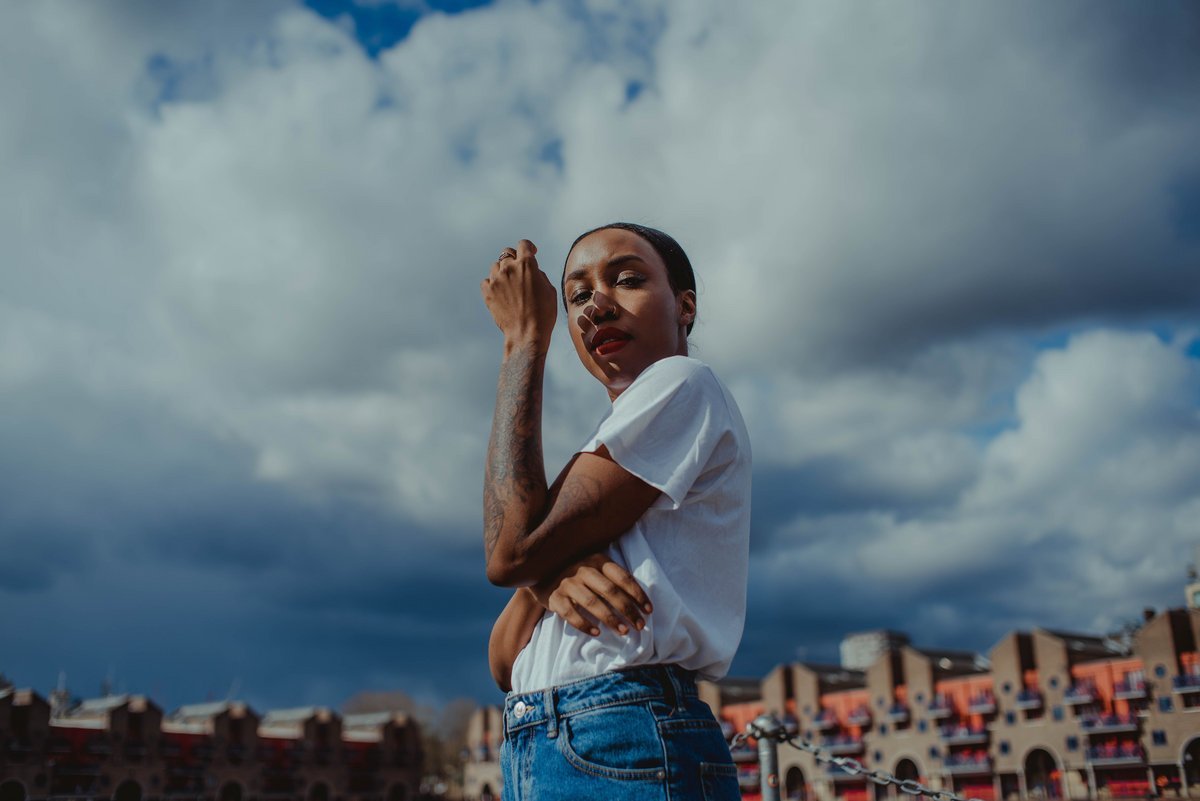 South London raised, and the child of Nigerian parents, Ego Ella May’s debut album Honey For Wounds was a unique blend of jazz, R&B and Neo-Soul vocal. Honest and engaging, the singer’s music is as healing and comforting as she herself comes across.

Speaking with EUPHORIA., the singer who is an avid reader and an introvert is somehow timid yet engaging with thoughtful answers tinged with wisdom beyond her years and a sprinkle mischievous humor, she effortlessly endears herself with an easy charm that is also reflected in her music.

Ego Ella May delves into the process behind her album, her struggles with mental health, and the message she wants listeners to take away from her honest, observational music.

What can you tell us about the inspiration and recording process behind your debut album Honey For Wounds?
It probably took me about four years on and off to make it. It was on my bucket list and just wanted to see if I could make an album. I worked on it with my friends and it was quite a smooth process because I didn’t think it was going to be an album until I go to the end of making it and felt it would make a good full-length. I was able to talk about everything I wanted to from politics to heartbreak and longing. It helped me grow and get over pain by putting it into song.

Your album is discussing topics like heartbreak and longing which can be quite personal. Is that generally your approach to songwriting or do you tend to take creative liberties with your writing process?
With this album it was mostly my experiences, it felt like a diary. But in general, I tend to draw from books I read because I’m an avid reader and it really influences my writing a lot. Usually, it’s a mix of personal and creative, but this album, in particular, was more like little diary entries, which I’d kind of back to and think “oh let’s make a song about that.”

It’s not always easy to channel vulnerability in your music, which is something you’ve mentioned you like doing. What’s the biggest challenge of being vulnerable and truthful in your art?
Just the fact it wasn’t always pretty. I didn’t want to come across like I’m negative and morbid. I also didn’t want people to feel heavy or burdened by my emotions when they listened to the songs. Finding that balance between remaining truthful to how I was feeling while still keeping it light for the listener was difficult. But at the end of the day, it’s my truth and life can’t always be positive so you need to talk about that as well.

Aside from the themes, you’ve addressed in this album and your music prior, what other things would you love to explore through your music?
Since 2016, I’ve been keen on focusing on mental health because my own mental health suffered in that year. After that I became so compassionate towards the experiences of people, urging them to prioritize their mental health. It’s become my mission to do this and it’ll be my mission for the rest of my life. Aside from that, honestly, it depends on what’s going on in my life that I think is important enough to talk about. I want to talk about a range of things like personal growth and awareness. But it can’t be forced, I’ll write about it as I live it.

You said earlier you don’t want to come across morbid or negative in your messages, so if listeners could take away one message from your music what would you want it to be?
Your feelings are valid. Feelings are fine. One thing we need to do through music is to address things that aren’t necessarily pretty. Most people listen to music, but a lot of the time we don’t put the hard things into songs. So I hope that when people listen to my music, they realize that feeling a morose or morbid sometimes is fine. It’s normal and they aren’t alone if they are feeling that way.

As a listener, who provides this kind of comfort to you? Both in terms of music and outside of it, who make you feel less alone?
In music, Lauryn Hill, Amy Winehouse, Nina Simone are important truthtellers in their music. Personally, my family and friends. I’m more of a one-to-one person than someone who finds comfort in a big group. I get too shy in a group but I thrive when it’s one or two people.

What’s the best part of making music? What frustrates you about it?
The creativity and free flow of thoughts, as well as getting to work with so many talented people are the best parts. The most frustrating part is the business side of things; you’d the music business would be about making music, but it’s so many other things besides being a musician. I enjoy making music, but I don’t enjoy everything else that comes with it.

Does being an introvert put pressure on you or make things difficult, particularly since you are part of an industry that’s about networking and meeting people?
Yes, it feels like it’s not me! Being the center of attention isn’t really something I’m comfortable with, but I also understand and accept that it’s part and parcel of the job. I’ve gotten better with these things now, it used to weigh me down earlier.

I’m curious as an introvert did quarantine and isolation motivate you to write music and be creative or did you find yourself struggling without the presence of anyone else to remain motivated?
Definitely a bit of both. At first, I was like “this is the dream,” but as time went on and people became uncertain about how long it was going to go on, I became quite demotivated. Particularly with everything in the news, I found myself uninspired and unable to create. As far as staying in and working, it wasn’t too hard though!

You’re comfortable working with other people when its making music. You also mentioned enjoying working with friends. So in terms of collaboration, who else would you like to work with?
Thundercat, Stevie Wonder, and Erykah Badu would top names on my bucket list!

What else is on your bucket list?
I want to play live and travel again. More big gigs or sell-out something in the future. An arena tour maybe? But that might freak me out, that many people might make me cry. Outside music, I’ve also been training to be a counselor, I got too busy with music so I deferred my course. I’d really love to qualify one day. Would love to go off-grid and live on a boat someday.

Of the things you’ve done or experienced, what’s been the most surreal moment?
This album! Getting it out and hearing the positive feedback. To get to this point of actually putting this out has been very surreal. I am really enjoying the comments and feedback on it as well.

Can you think of one comment about the album that made you really happy?
Someone said the album feels like a hug from someone who has come to save you and will never leave you again. It felt so nice like “are you talking about me?”

What’s next for you in the immediate future?
I’m meant to be gigging on the back of this album, but that’s obviously not happening. There are plans to put a vinyl out as well. But other than that, I’ll probably just be making more music. Until I can go out and play music live whenever in the future, I’ll just keep making more music. That’s my plan!

If you could have three songs that would be the soundtrack of your life what would they be?
This is so hard; I could pick so many songs! But… “My Way” by Frank Sinatra, “You Are The Sunshine Of My Life” by Stevie Wonder and “On & On” by Erykah Badu.