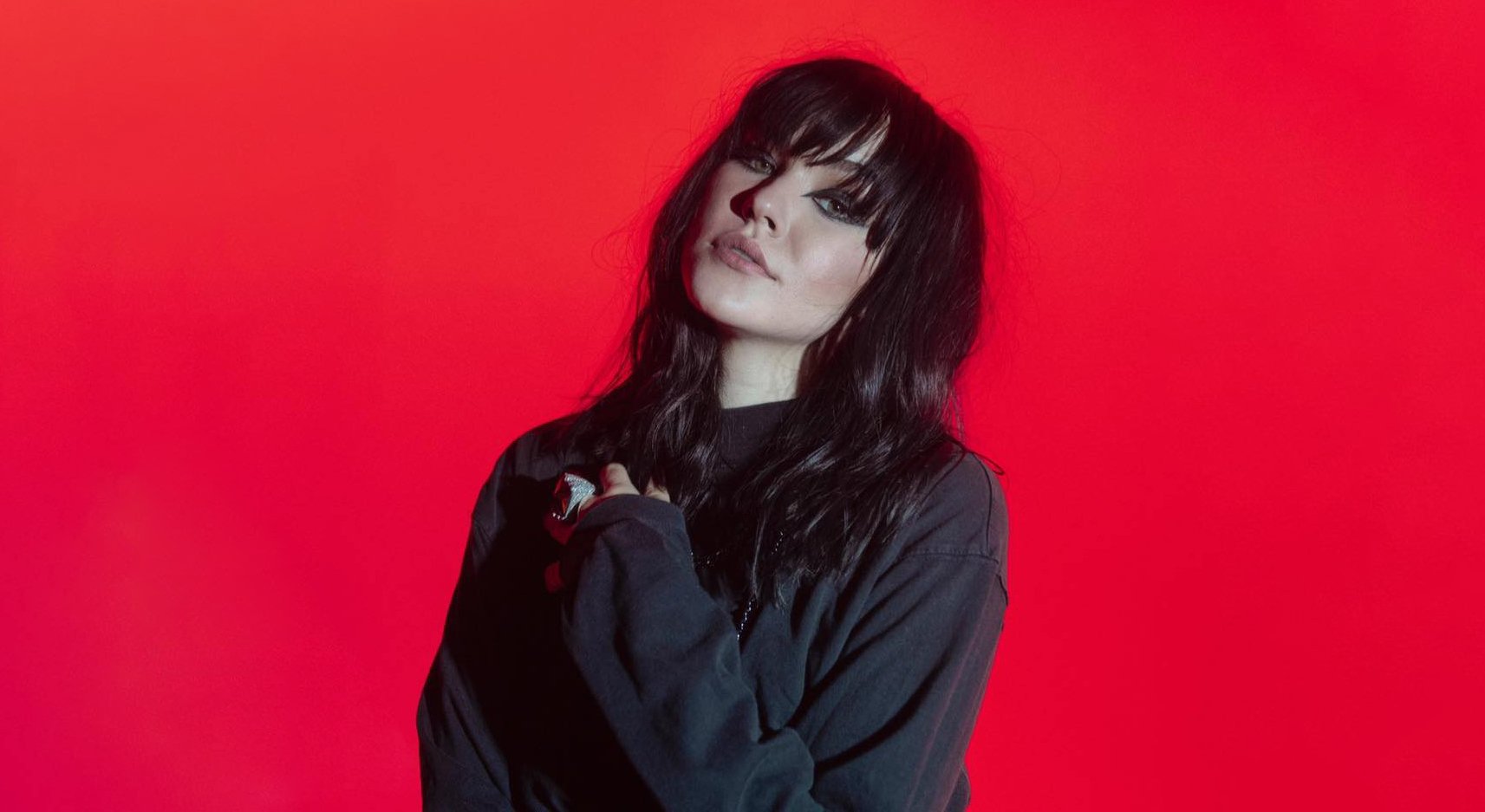 You may know her from the viral TikTok where she sings a song along to a girl ranting about her ex-boyfriend, or from her hit song “Drugs” featuring Two Feet, which has been used in over 200,000 TikTok videos to date. Taylor Upsahl, also known as UPSAHL, grew up in Phoenix, Arizona where she went to Arizona School for the Arts before moving to LA to pursue her musical dreams. She was 17 when she first started releasing her own songs in her hometown. Her indie/alt-pop tracks like “Kiss Me Now,” “Wish You’d Make Me Cry,” and “All My Friends are Rich” have gained her fans and critical acclaim over the years.

Her newest single “People I Don’t Like” dropped this month following the success of her last song “12345SEX.” The lyrics are honest and self-reflective, only further proving her ability as a songwriter. UPSAHL was a co-writer on Dua Lipa’s track “Good in Bed,” gaining her praise from NPR. We spoke with her about all things music, quarantine, and her upcoming EP!

Can you tell us about your new single “People I Don’t Like”?
I basically wrote it earlier this year, like, in January during the Grammys when they throw a bunch of music industry parties in LA. I was just kind of bouncing around at all these different parties and was realizing after, like, day three that you meet the same people every night, and you reintroduce yourself because you’re either drunk or you half-remember them.

I just realized very quickly that no one wants to be here, one, and two, it’s just the fakest, most weird thing but at the end of the day, like we’re all in it together, we all feel the same way. So I was coming from one of those events, and I went into a session with my friends, Johnny Shorr and Will Jay, who are both dope writers and Johnny’s the producer. I was like, “Dude, why do we go to these things? Like what is it?” And we were just kind of bitching about all the different types of people that are there and the people we don’t like and then we were like, oh wait, we’re those people too. We act the same way. So, as much as the song is like a diss track on all these different people it’s also a diss track to me. It was fun to write.

The music video is so cool and trippy. How did you guys come up with the concept?
It was actually the director, George Gallardo’s, idea. I knew going into it that I kind of wanted to have different characters, but I was playing all the characters to kind of symbolize the fact that as much as, like, I’m talking about people I don’t like I can be those people on any given day. I got to play dress-up, which was really fun. I give all the credit to George, though, with the concept. He really made it so dope. It was interesting to do a video shoot during quarantine with everyone wearing a mask, having to social distance.

How did that work? Did you guys have to get tested before you went for the shoot?
Yeah, you get like your temperature checked multiple times, you have to sign all this paperwork. Everyone had their masks on, like, the whole time. I couldn’t because I was getting my makeup done, but I was so quarantined before doing the shoot. So, we were all super safe about it, but we’re living in a time right now where everyone is trying to figure out how to adapt to times like this but still be able to create and put out art because I feel like art is the only thing getting a lot of us through crazy times like this. Everyone’s still trying to figure out ways to make it as safe as possible. But it’s nice to know that it is possible to make a sick ass music video or make a sick song on Zoom. Like, there are ways to continue to do what we do. We just have to change it a little.

How has it been making music, promoting them, and performing them from your home? Have you gotten used to what everyone’s calling the new normal?
I don’t think I’ll ever be used to it because I miss playing shows so bad. I really miss touring, I miss being in the room with people while writing a song rather than being on FaceTime. I’m trying to just make the most of it, like, I feel like as people in music we’re so lucky that we still have a job and we can still continue to do what we were doing before, it just has to change a bit so I definitely am trying to make the most of it. It’s weird, though, like trying to make a song and build it from the ground up on FaceTime. It’s the strangest thing but we’re trying to make it work. I hope I don’t get used to this at-home life.

You recently streamed a live performance online. What was that like?
For the release day of “People I Don’t Like,” I put on a live stream release party that was just me and my band playing what would have been our new set if we would have gone on tour. I feel like these live streams have been keeping me sane because I was pretty much on the road for half of 2019. I was getting really used to how much I love the touring life, and then it all got canceled so I’ve been trying to do these live streams, which has been fun. This one, a lot of people helped out with and made it super dope. I got to play with my band, who I haven’t gotten to play with since the end of last year, so it was fun. It was the most fun we’ve had because we don’t usually get to play with like a full stage production and lights and visuals.

This is your third single this year. Are you leading up to an EP or an album?
I’ve been working on an EP over the past year and a half. I’ve just been writing pretty much every day for it and we’re entering the final stages of piecing the whole thing together. So, there definitely will be an EP, either later this summer or early fall, and I’m like the most stoked I’ve been about the music I’ve been making. There’s a strong vision behind it and I’ve been super inspired. I’m working with my friends on it and I’m super fucking excited to put out this EP.

Can you walk us through your songwriting process? Where do you get most of your inspiration?
I feel like moving to LA has been kind of my biggest source of inspiration. Just because I’m growing up in my 20’s while being in a crazy city like LA, and I moved here alone too so there was a lot of personal growth and a lot of highs and a lot of lows. I’ve written through all of that. As cheesy as this sounds, writing is so therapeutic for me. However, I’m doing that day I’ll normally just write a song about it. I feel like my writing process changes depending on who I’m with, like some days we’ll already have a title and a concept and maybe even a melody and then we’ll base instrumentation off of that, or other days we’ll start with a cool bass sound and see what ideas we come up with from there, so I think it just depends. I definitely think LA and how much my life has changed since I’ve moved here has had a big impact on my writing process.

Where did you move from?
Phoenix, Arizona. I grew up there and feel super lucky. The music scene in Phoenix was the shit. And I went to a really cool performing arts school pretty much my whole life I was there. But it’s just funny because you have this little community in Phoenix of like music people and then you move to LA and it’s like, oh, everyone here does something in music or entertainment, like where do I find where I fit in? It was a slap to the face, but I’m in love with LA now.

Oh, wow! So did you always know you wanted to do this?
It was never even a decision I had to make. My dad was in punk bands all throughout me growing up, we had a band room in the house. When bands that my dad knew would be on tour, they would crash on our living room floor on air mattresses and I would wake up and be hanging out with all these punk rock dudes. So, I was just obsessed with the community and the vibe, and we had a bunch of instruments in the house. My dad started teaching me the guitar, my grandma taught me classical piano, and I was always singing. There was never a question, it was just always the only option for me.

What can we expect next from you?
The EP is coming soon, but before the EP hopefully, we’ll have another music video for another one of the songs off of it. But yeah, as much art as possible. I feel super inspired. The music that’s gonna be on the EP is, like, super important to me so the visuals that go along with it and the artwork and just like everything is going to be super thought out and I’m just excited to share it with everyone because I’ve been working on it for like over a year, so yeah I’m stoked.