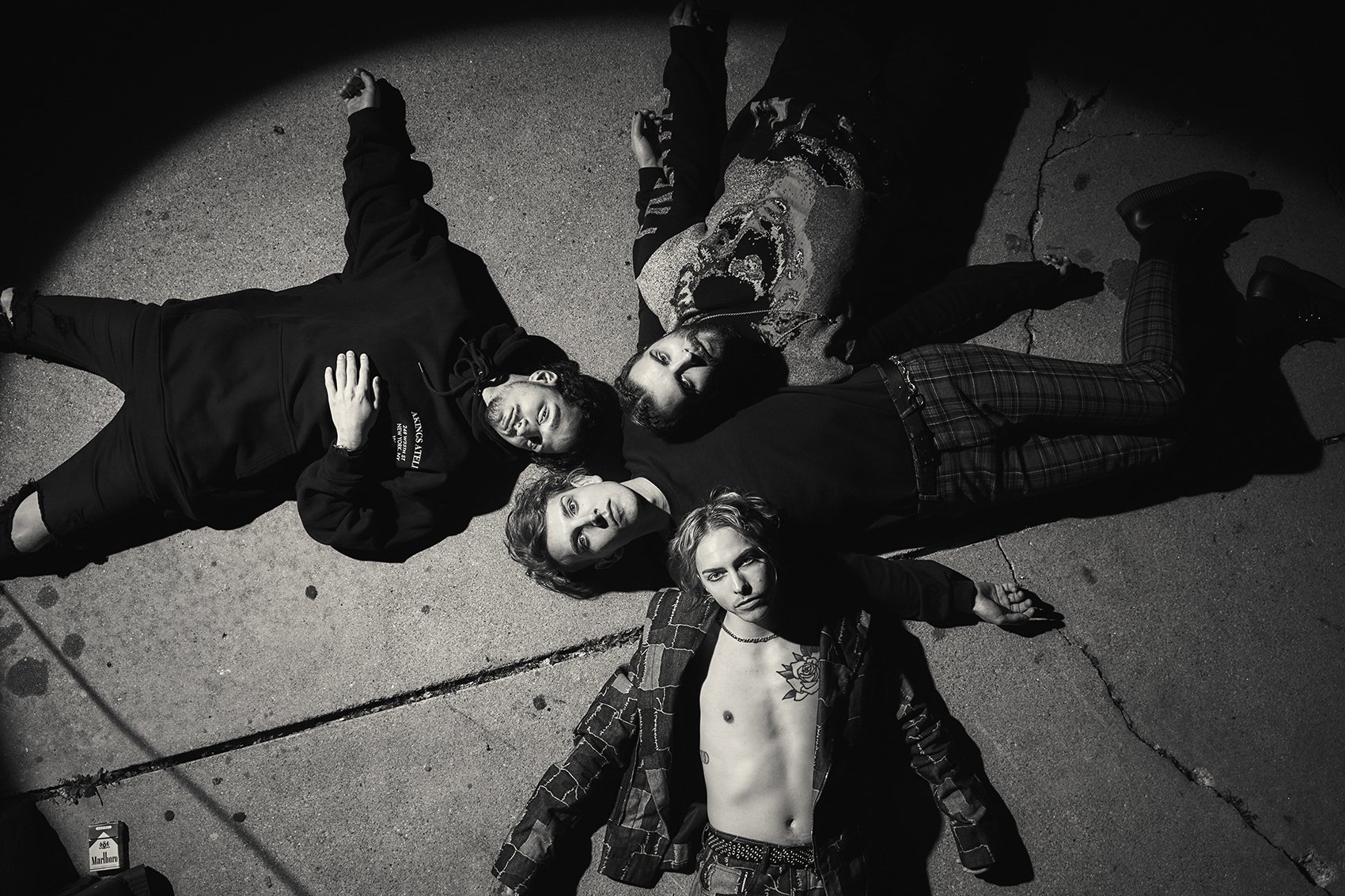 English rock quartet, The Hunna are set to drop their new album I’d Rather Die Than Let You In on October 2. Making up for the lack of tours in 2020 owing to the pandemic, and as a way to lead up to the album debut, the band is committed to releasing a new track every month until October. Working with Travis Barker, Pete Wentz, Josh Dun, John Feldmann & more, I’d Rather Die Than Let You In explores the group’s anger, resilience, and ultimate rebirth. With their May release “If This Is Love” ft phem and their most recent high energy single “ I Wanna Know,” The Hunna – consisting of singer/guitarist Ryan Potter, lead guitarist Daniel Dorney, bassist Junate Angin, and drummer Jack Metcalfe- has risen from the ashes with all new music that emphasizes “it’s okay to be angry but it’s time to move on.”

Speaking to EUPHORIA., vocalist Ryan delves into the band’s beginnings in college, their sonic and lyrical evolution, what they’d like fans to take away from their music, who they’d love to collaborate with, and their hopes for a future of impactful music they call “Hunna Mania.”

Your album I’d Rather Die Than Let You In is slated for an October release, but you’ve announced your plans to drop one single every month in the lead up to the album. What inspired the band to do this? Do you feel pressured to keep this kind of schedule?
Given the current global situation, we had to look at our campaign for the year. Right now we’d be on tour, but since we can’t do that we decided to release more songs from our album is as exciting for us as it’d be cool for fans. We are actually very confident and excited for people to hear the singles and the whole album as well.

How did the collaboration with phem on your previous single “If This Is Love” come along? Which artists would you love to collaborate with in the future?
I found phem’s music a year or two ago, and I was intrigued by it straight away. I’d been wanting to work with a female artist. When we were recording the album in L.A, we were at Halsey’s Halloween party and phem was there as well. And we just met, learned that we both like each other’s music, and it just grew from there. For the future, The Weeknd who is a huge influence of mine as a vocalist is definitely a big one. I’d also love to do something with Hayley Williams and Phoebe Bridgers at some point.

Who are your influences in music?
Some of my biggest inspirations are soul, R&B artists. But we draw from a whole spectrum of artists from The Weeknd, Kanye West, Drake, Aretha Franklin, Foo Fighters, etc. We’re predominantly a rock band but we listen to so many different kinds of music, and we’ve been wanting delving into production and synth sounds reminiscent of The Weeknd’s sonics on their recent records. Our drummer Jack gets his influence from heavier bands like Deft Tones, Nirvana, Slipknot. Our guitarist Dan draws from English indie, guitar-led acts like Bombay Bicycle Club. We listen to so many different artists and we’re inspired by whatever moves us.

How has The Hunna’s sound evolved until now? How do you see it evolving in the future?
We like to call our music “turn up rock” and our first two records were just straight forward rock ‘n’ roll but as we’ve progressed as a band we’ve drawn from various influences and be freer with the different avenues we’ve wanted to explore including hip-hop and electronic. Our new album is definitely going to show how far we’ve come as musicians as well as people– it’s our coming-of-age album.

What’s the best or most exciting part of making new music?
The best part is seeing your ideas and rough demos come to life and start sounding like full songs. Watching the journey of a track and finishing a track for it to sound even better than what it was in your head. This is new record was also made in LA, and in a good environment so that was also great for our mental space.

If listeners could take away one message from your music, what would you want it to be?
Even in the darkest times, ground yourself by thinking of things worth fighting for. This new record is a lot of things, but what we like to call it is “The Hunna Horror Story”, delving into the issues we had with our previous record label; about being in the situation, fighting against them,  overcoming everything and finding strength in adversity.

This record appears to be based on personal experiences, is that how The Hunna has always approached songwriting?
The majority of our songs are always written around our personal stories. I’ve found that drawing how you’re feeling and what you’ve been through feels most natural for us. Before we in The Hunna, we used to write songs about movies and our favorite characters in movies. People have asked us to do that again, so there’s definitely different paths to go down in the future in terms of creative liberties. But I’d say all our music in the last few years from our second album onwards, right to the forthcoming record are generally drawn from personal experiences.

Was there a particular reason that your songwriting began to lean away from writing about movie characters and focus on personal stories?
It was quite organic. Before we were in this band, while we were still in college we’d write about where we were at that point in life and how we felt then. Our first record was quite light, as it was written after we’d been signed to a label and that was so exciting. We just progressed from there, as we began taking inspiration from things that happened to us as a band and in our personal lives.

What’s been the highlight of your career so far? What’s next for the band, besides the album?
Playing the main stage at last year’s Reading & Leeds was really special for us, it showed us where we could go as a band. We’re hoping to get back on the road for a world tour next year, we dream to be one of the biggest bands in the world playing festivals, arenas and wherever else they’ll let us play. So what’s next? Hopefully, it’s Hunna Mania!

Speaking of tours and live performances, are there any particular venues or countries that you’d love to play at?
We’d love to tour more of Asia, we’ve only been to Jakarta so far. Would love to go to Japan and the Philippines next year. We’d love to see more of the States as well, L.A has become a second home to us so we’d love to be there more in the future.

What’s something related to your music or your fans, that made you smile recently?
I’ve had a few messages from fans about how much they are loving the new song, about how it’s helping people get through this crazy time at the moment. Writing music that makes people feel and connect with us something is what’s important to us and makes us smile.