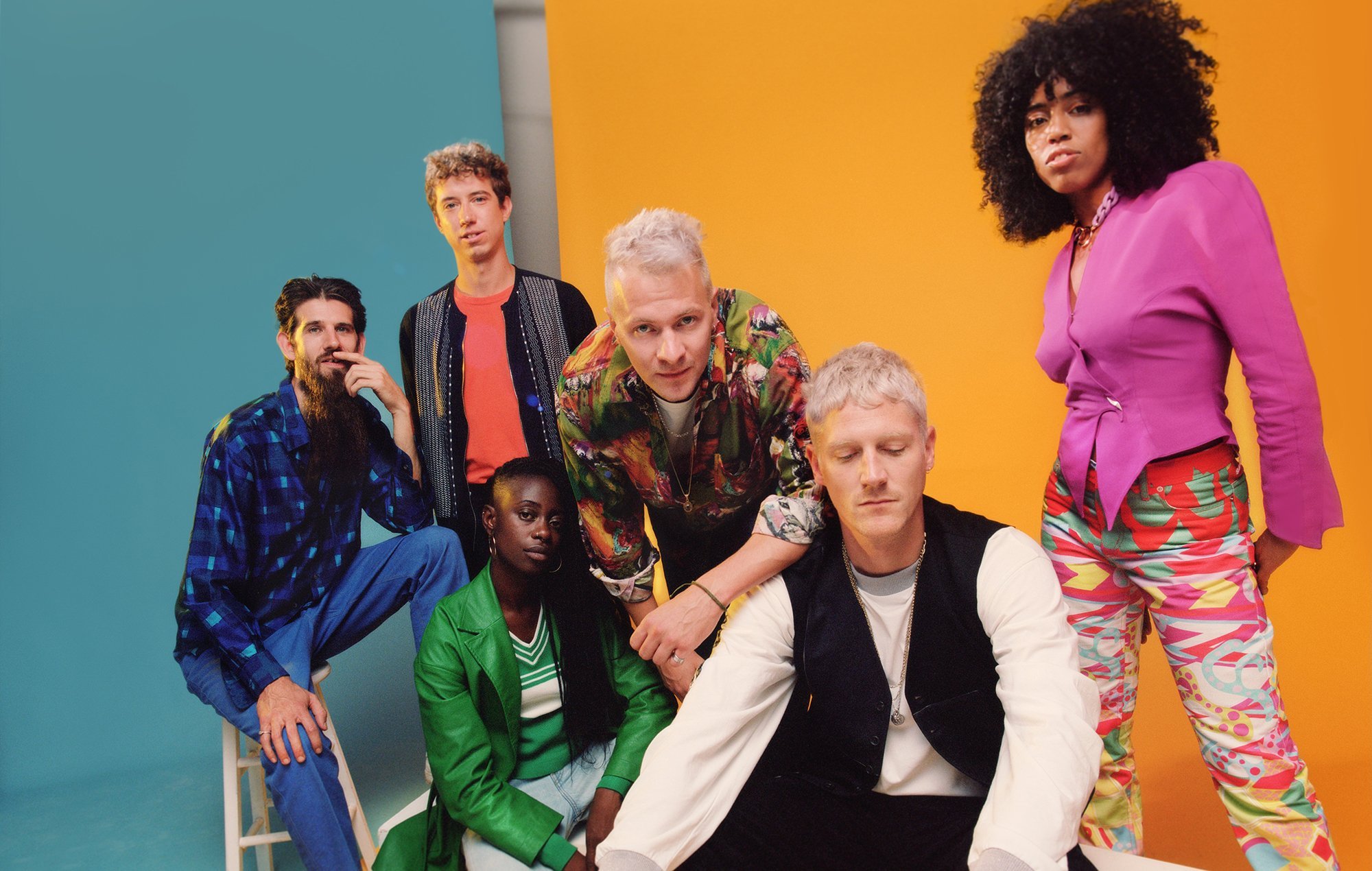 You’d be forgiven that thinking Franc Moody is just one person, when in fact, it’s a six-strong collective. Formed by Londoners Ned and Jon, the band was born out of Tottenham warehouse parties (which we bet were absolute ragers). Their sound was inspired by funk overlords Jamiroquai and Daft Punk but features glittery dustings of disco and electronic throughout.

Their first full-length album, Dream In Colour, which was released in February, is 40 minutes and 48 seconds of dancefloor-filling, groove-tastic tunes. Along with their euphoric gigs, it’s positioned Franc Moody as a one-stop-shop for feel-good vibes.

We spoke to Ned and Jon about how they channel that magical energy at their gigs, the collective’s creative process, and what their music would taste like as an ice cream flavor.

Your music and shows provided an escape for people to let loose. Since we’ve been in lockdown, what have you missed about performing live?
Ned: I’ve missed playing live hugely and I know that goes for the whole band too. I miss that bubble of us all living together in a little van, going to these amazing new places and having new adventures and experiences together. I can’t express how lucky I feel to be able to live that life, and to do it with your best mates is all the more gratifying.

I went to one of your gigs earlier this year [Shepherd’s Bush Empire] and there was such feel-good energy all night – the entire crowd was dancing and singing along. How do you generate and preserve that feeling as a band?
Jon: That really was the last dance before the lockdown! I think there are so many factors that come into play, the energy we feed off from the audience is so key, but also us on the stage honoring that and doing everything in our power to make sure we bring the party! I think that live energy is at the epicenter of the whole project. That’s the energy we’re looking ahead to when we’re writing in the studio. And it’s so rewarding when you get to a place like SBE and you feel that in the room.

Have you noticed your music growing and changing since you started performing it?
Ned: Definitely. I think in the 3 years since our first show at Bermondsey Social Club we’ve changed dramatically. In the last year we really started hitting our stride sonically and performance-wise, the show as a whole started to feel more confident and assured. I think that’s mirrored itself in our writing too. We’ve carved out our own little niche, and it feels really exciting!

Your funk-tastic album, Dream In Colour, came out in February. What’s the Franc Moody collective creative process like when creating new music?
Jon: We don’t have a set formula per se. But Ned and I squeezed all the tunes out of our little cupboard in Kensal, North West London. We often start with a bassline or a little groove idea, and if it’s got something about it we’ll start layering up guitar, keys, hot sauce percussion, oboes, and start hashing out some vocal ideas. The last sprinkles are added with the family string section coming into record for a day and our drummer Dan coming in to spice up the drums with some live hi-hats. But we try not to make that a definite approach… The key has been learning to complement each other’s ideas in whatever format they arrive.

Did you have an inkling of how much people would enjoy your music when you first started making it? Or did the success come as more of a surprise?
Ned: I don’t think we even thought about it, to be honest. I mean we definitely wanted as much traction as possible! But I don’t think we entertained the idea that it would be a success per se. I remember personally feeling like there were stirrings of excitement when we released “Dopamine.” That’s not to say we’d become successful with that release, I think it’s more like you could see that it had made a connection with people in a small way which was great.

Which of your songs do you regard as the best and why?
Jon: I think one of my favorite records we’ve done might be Pheromones. It feels unique and it still packs that punch every time in the live set. It’s been our secret weapon for a while now! I also love “Night Flight” and “Dream In Colour”… Both of those tunes feel like real slabs of the Franc Moody sound.
Ned: My favorite tunes change a lot, and almost nightly when we’re on tour… “Dream In Colour” is one of the funnest to play live, so is “Night Flight”…”Skin On Skin” appeals to my doo-wop sensibilities and “Dopamine” (as mentioned earlier) felt like the first moment where we were truly connecting with people via Franc Moody. Another favorite is a lesser-known track off the album, “This Is A Mood” which came together really quickly, quite effortlessly. It’s just a nice song, with nice chords and melodies. So in summary, I like ’em all in different ways.

If your music were an ice cream, what flavor would it be?
Ned: Scotch Egg flavor.
Jon: Hahaha couldn’t agree more.

What’s been the highlight of your Franc Moody journey so far?
Jon: There have been so many things we’d never dreamt of being able to do. From playing shows at 80 cap Bermondsey Social Club, to the 20,000 capacity. O2 Arena (supporting Chic), festivals in Egypt and Mexico, touring the US, making records with Nile Rogers. But ultimately for me, it’s hearing individual stories about how our music has affected people positively. From helping someone through a personal struggle or simply just getting them up on a dance floor.