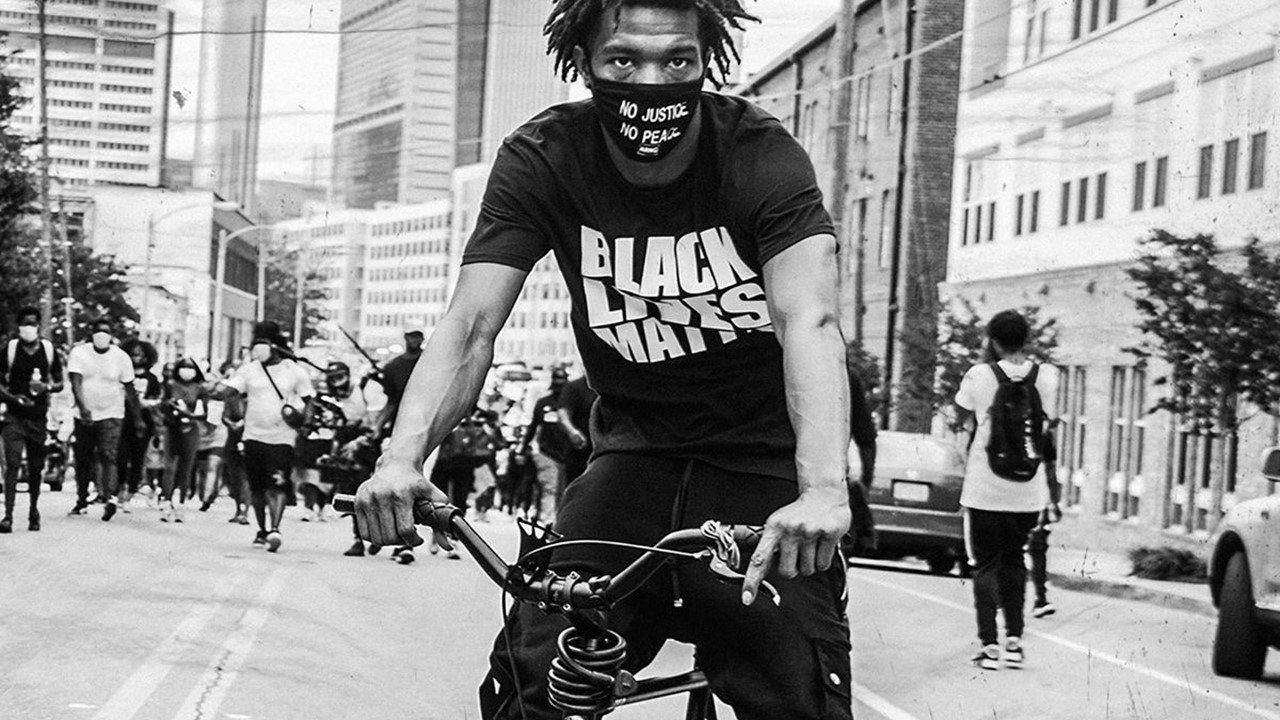 A truthful perspective lined with vulnerability and motivation is the quality for which Lil Baby has come to be known and appreciated.

As the rising leader of the new school, Baby has the ear of the world. His album My Turn, which recently had a deluxe version re-release, has a chance to regain its status as the #1 album on the US Billboard chart. On his new single “The Bigger Picture,” you can feel Baby’s sense of duty because of this. He raps, “fuck around got my shot I won’t let up,” and attempts to dissect the complex state of affairs aligned with unrest from police violence as everyone is listening.

On June 7th, Lil Baby was seen at the forefront of an Atlanta Black Lives Matter protest alongside local councilman Antonio Brown. He became a part of a group of rappers seen standing alongside fellow citizens voicing their frustration, including J. Cole, Kanye West, Kendrick Lamar, YG, Lil Yachty, Young Jeezy, and more. Baby’s analysis of the situation begins straight from the top of the song. He raps, “I find it crazy the police will shoot you and know that you dead but still tell you to freeze.” Baby, in potentially his most interesting rap line yet, dives into the absurdity of the police mind-state. His observation outlines the police’s lack of humanity and thought process that prioritizes protecting themselves rather than the communities they are paid to and have taken an oath to protect. Baby describes a moment, one that is familiar to those who have seen videos of brutality or experienced it ourselves.

Lil Baby also dives directly into the feeling of paranoia out of necessity. He raps, “Crazy, I had to tell all of my loved ones to carry a gun when they going outside/ Stare in the mirror whenever you drive. Overprotective, go crazy for mine.” Interestingly, he describes his behavior and warnings as overprotective when, in fact, they are just reactive. The feeling behind the raps taps into the emotional state of a constant discomfort for protection. Baby points out losing his sanity for the sake of preserving the lives of the people he loves.

Lil Baby expresses his hurt and frustration at the failings of the police. He raps, “They supposed to protect us/ Throw us in handcuffs and arrest us/ While they go home at night, that shit messed up/ Knowing we needed help, they neglect us.”

In the second verse, Baby becomes self-reflective while also developing a solution-based thinking process. He raps about problematically writing lyrics about violence and drugs because of the need to vent, whilst calling on his followers to vote for a different future: “I can’t lie like I don’t rap about killing and dope, but I’m telling my youngins to vote/ I did what I did ’cause I didn’t have no choice or no hope, I was forced to just jump in and go/ This bullshit is all that we know, but it’s time for a change.”

In the third verse, Lil Baby describes the entire song as a sort of vent: “It ain’t makin’ sense, I’m just here to vent/ It happen to one of your people, it’s different.” His ability to express such raw and relatable thinking is what makes him such an incredible wordsmith. Baby’s is the voice of frustration and fear, combined with the need to act.

Lil Baby has had one of the most individually successful years in music thus far. Simply, he has one of the most important voices in music because of where his perspective is centered. Baby seems to embody the Kendrick Lamar lyric from his song “Ab-Soul’s Outro,” where he says, “I’m not on the outside looking in/ I’m not on the inside looking out/ I’m in the dead fuckin’ center looking around.”

While Kendrick’s voice was the sound of the Mike Brown/Eric Garner/Freddie Gray protests with his song “Alright,” it seems clear why Lil Baby has the sound of now. The song and perspective come at the perfect time as Baby seems to center and ignite the listener simultaneously. In the hook, he raps poignantly, “It’s a problem with the whole way of life/ It can’t change overnight, but we gotta start some where/ Might as well gone ‘head start here.”