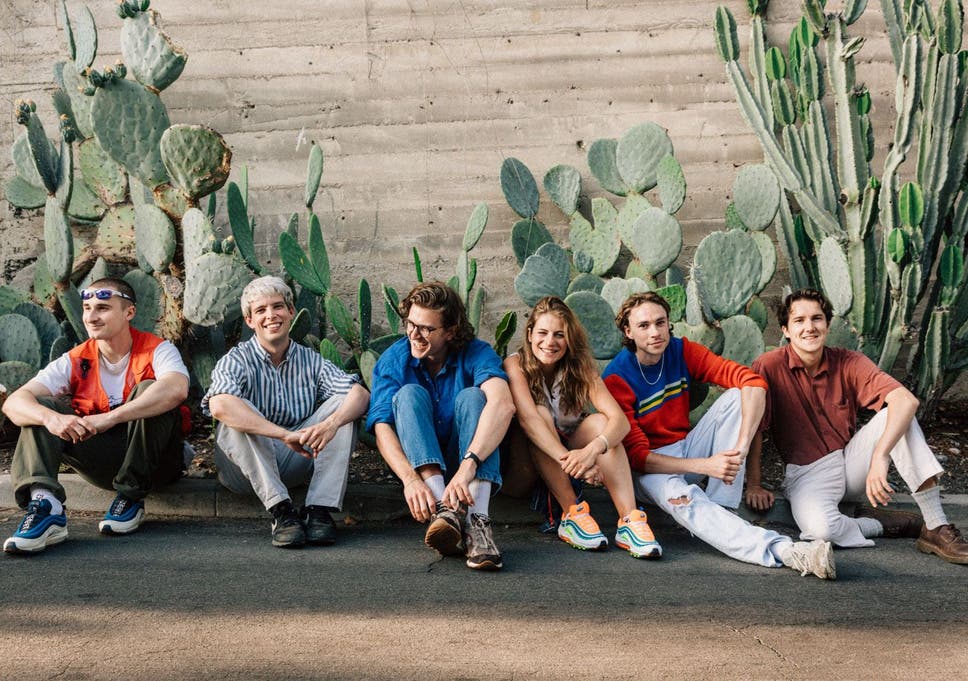 Cambridgeshire six-piece Sports Team has garnered a fearsome reputation of late in the U.K. Their jovial, indie guitar-focused ethos has won the hearts of thousands of fans across the country.

Through playing countless live shows and creating several recordings over the past few years, have culminated in the arrival of their buoyant debut album, Deep Down Happy.

Released on Island/Big Desert Records, the band has attempted to instil the chaotic energy of their live performances into their recorded work – which, for those who have seen the band live would admit, is not an easy task. But they have resoundingly succeeded with twelve tracks of topical, semi-ironic expressions of British society; all added with a touch of naked controversy for good measure.

British indie music, particularly in the 90s, was characterized by an idealization of the working classes and an opposition against the middle classes – whilst ironically, many indie artists were themselves middle class. Sports Team’s affluent Cambridgeshire heritage follows suit with this British indie tradition and their middle class infused commentaries of working class England were subtly satirical in their earlier released singles such as “M5,” and their jolly galivant to the seaside town, “Margate.”

Yet their penchant for smart-arse literacy, channelled through their frontman Alex Rice, is Sports Team’s USP, paying homage to the likes of Pulp’s Jarvis Cocker in its frankness and comedic twang.

Deep Down Happy begins with “Lander.” Rice’s exuberant wails permeate throughout frantic guitar and drum rhythms in the track, telling tales of packing lunches in Aldershot whilst aspiring to become a lawyer or someone who hunts foxes – the most middle class of British middle class traditions. “Camel Crew” and “The Races” both exhibit similar qualities, entailing odes to a day in the life of the bourgeoisie and the grandeur of age-old British horse racing in both tracks respectively.

“Going Soft” best displays the band’s comedic touch. According to the band, “this is a song about erectile dysfunction dedicated to the older Sports Team fans that keep them afloat by buying the vinyl.” Elsewhere, “Long Hot Summer” brings the pace of things down a notch. The first verse reads: “Homesick and hungry and insulted / There’s nothing for me and the nights thick / There’s nothing for me in this town / It’s just a bad fit,” portraying an introverted side to the band’s otherwise extroverted nature.

Though the album consists mainly of previously released singles, when brought together as a comprehensive collection in Deep Down Happy, they all take on a new lease of life. As well as the immensely popular tracks “Fishing” and “Here It Comes Again,” is “Kutcher,” a song in which the narrator laments “I just wanted to be your Demi Moore.”

The stand-out track of the album comes just after the midway point with “Here’s the Thing.” Its tongue-in-cheek poke at the falsities that modern day society enshrines encapsulates Sports Team’s core nature in under three minutes. Its catchy call and response structure makes it even more of an earworm.

Sports Team have made a bold statement with Deep Down Happy. They’re a band capable of drawing attention with ease and are not afraid in the slightest to raise a few eyebrows with their views.

Like them or not, beneath Sports Team’s affluent exterior lies a fun-loving band that are truly Deep Down Happy, and it shows.