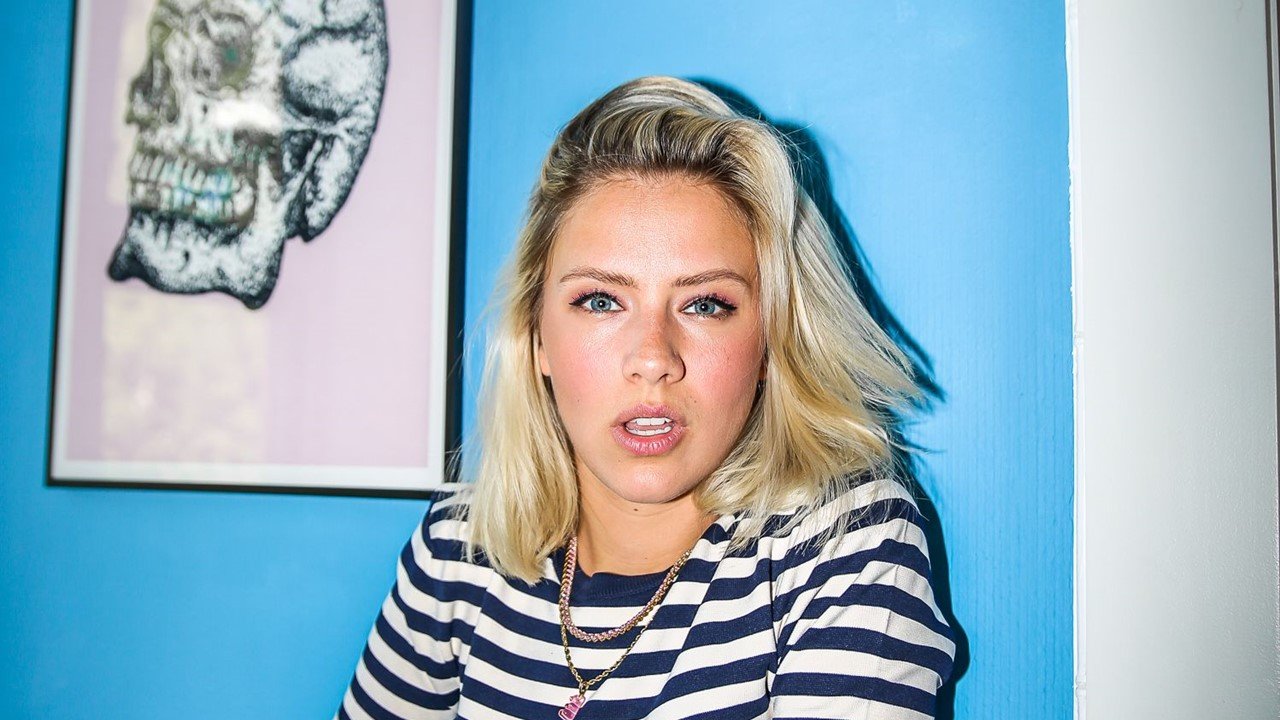 Dagny has crafted a corner of music for herself filled with euphoric, shimmering pop bops you can’t help but dance to. The singer/songwriter seems to have a knack for creating relatable, feel-good numbers – something we especially need right now in the midst of a global pandemic. Luckily for us, she’s recently dropped Side A of her debut record, Strangers / Lovers.

The six-track release pictures a double-headed Dagny, clad in a pink vinyl trench coat and black elbow-length gloves, set against a gloriously kitsch pink checkered wall. The visual fits perfectly with the record’s concept, which Dagny tells us, is “all one story but two very different sides of the story.” More on that later.

We first spoke to Dagny three years ago. Since then, she’s released a stream of anthemic singles, including “Love You Like That,” and “That Feeling When,” and worked with huge producers such as Seeb on “Drink About You” and Steve Aoki on “Hit Your Heart.” Each release is marked with an instantly recognizable Dagny stamp.

We had a chat with Dagny about her new music, mixing personal experience with imagination for musical inspiration, and having too many cucumbers.

First of all, how are you? How have you been spending lockdown?
I’m in Norway – I actually live here. I’ve been spending it in Oslo. I was actually in Spain when the whole thing went down and we got home just in time, literally the same day Spain shut down we got on a plane to leave. So it was a bit weird seeing Norway shut down from a distance.

Have you picked up any hobbies during this time?
I have managed to make a pretty massive vegetable garden. It’s just a bit too big for my apartment. Now I don’t know where to put all my cucumbers and tomatoes. Other than that, I’ve been sowing, something I’ve been wanting to do for a long time, so I was pretty excited to finally get some time to do that.

You released the first part of your album, Strangers / Lovers, on Friday 22 May. What’s the meaning behind the title?
The whole overall concept was following the relationship from before and during, which is Side A, and then after, which is Side B. Strangers / Lovers came from this idea that you go from strangers to lovers to strangers again. I found that nice and brutal because you meet someone and then you don’t know whether they’ll be your closest person and fast forward a year maybe, they’re the one you always call and share all your ups and downs with.

Once the relationship is over, suddenly it’s the most unnatural thing in the world to call them and you see them moving on with their life. Suddenly they’re hanging out with people you don’t know and they’re doing things you don’t know anything about. It’s kinda nice to think that anyone you meet could be that person but then it’s also brutal to think that once it’s over, you go back to being strangers again. A lot of thoughts and things were made around that theme.

What drove the decision to release the record in two parts?
I felt like when I was listening through and picking the songs, it was all one story but two very different sides of the story. Putting it all in one big bowl and serving it like that didn’t make sense to me, it felt like if I split it up, I’d be able to tell the story in a way that enhanced [it]. It allows the listeners to digest it part by part. I thought that made sense really.

Did you have any specific goals in mind when you were creating the record?
My biggest goal was to be able to release a record and to be able to dive into a project that was a bit bigger than releasing one song at a time. It felt like a new challenge and it forced me to think about things in a slightly different way.

It forced me to have a bigger plan and a bigger idea and still be able to pull it off. Obviously also because for people that follow me for years, it served to give [them] more than just one or two songs a year, which is almost what I’ve been doing up to this point. I just felt like it was time. I couldn’t take myself seriously anymore unless I released a record. I just had to dive into it.

What’s your favorite track from Side A of Strangers / Lovers and why? I love “Come Over” and “Somebody” because they’re so euphoric and represent that emotional rush of being in love so perfectly.
It’s almost impossible. There have been different times where I’ve had different tracks as the favorite. There were a few that were a bit more challenging to figure out. There was a time where I thought, is it right for the record? Should I go there or not? But actually, overall, I think I’ve had favorite periods with all of them, which is really nice.

“Paris” we’ve actually been touring with a bit so I kinda felt that was the one I was most used to. That was already in a pretty good place before we even started the record, so I didn’t have an intense period with that one. But all other tracks had their intense period where [it was] all I could think about, all I could listen to for weeks basically [laughs]. “Coulda Woulda Shoulda” I’m pretty excited to play live. I think that’s a pretty fun track. Right now, it’s actually maybe that one that I would listen to first. I like them all [laughs].

It must be frustrating to put out new music and not be able to play it live. What are you doing in the interim to fill that space?
It’s definitely a bummer that we can’t go out and play [the new songs] because a part of releasing something is that moment when you go out on stage and you can see first hand how people are reacting to them; which songs people are singing along to. For me, it’s just sad because the summer festival period is like the highlight of my year. We’re trying to do more acoustic videos. It’s not the same experience as playing a live concert, but at least we’ll be able to play together a little bit so people can hear the live version without being in the same room or area as us.

Speaking of love, that’s something the release is heavily influenced by. Do you mine your personal experiences for musical creativity or draw from your imagination?
It’s definitely a mix of the two. I take it from personal experience but I can also drawback… It’s not only the recent stuff. I also think back to when I was a teenager, all through my twenties. There’s been inspiration taken from my whole love life, I guess. But I also think that when you’re in a process of writing with other musicians and you’re discussing a theme, you’re having conversations and you’re inspired by the things you talk about. There’s a lot of personal stuff in the songs but it’s also reflecting around the subject itself. For example, “Somebody” is trying to capture that particular emotion, it’s not necessarily ‘that one week I felt like that.’ I remember how it feels to be madly in love. That’s the kind of thing I’ve tried to bring out when I write, to be able to capture that feeling.

Where’s your happy place?
That’s a tough question because there are different places, but that’s a good question. It sounds cliché to say it but on stage when we’re really connecting with the audience and vibing. Whether it’s on stage or whether it’s in a rehearsal room, that’s a very particular emotion that I don’t really get from a lot of other things.

At the same time, I love being outdoors, being active – on a summer’s night when we’re bicycling or in the woods. Also, my flat and my parents’ house, places I can really relax. Being in this job, you’re pretty on all the time. Having places where you’re just able to shut off is pretty important. So I would say it’s a mix of those things.