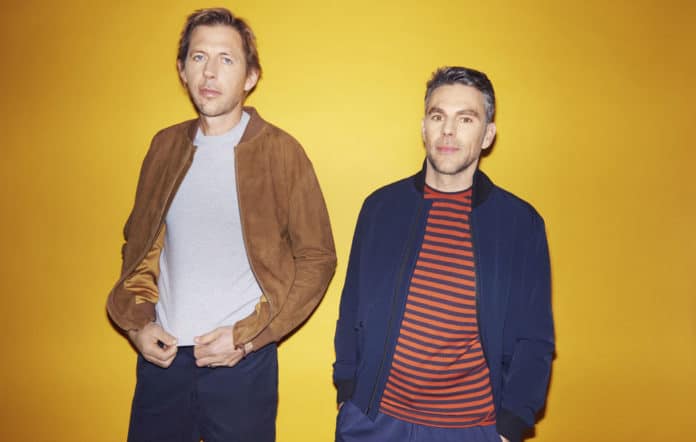 Groove Armada – Get Out On The Dancefloor

Groove Armada are back in the house (literally) after dropping their new single “Get Out On The Dancefloor” on Thursday.

The track’s accompanying video was filmed remotely during the coronavirus-enforced lockdown. It features a number of famous faces including Sophie Ellis-Bextor, actress Rose McGowan and UK drag star Divina de Campo dancing to the new jam in and around their living rooms.

See if you can even spot Tom Findlay – who makes up one half of the legendary dance duo – grooving in the kitchen with his dog.

“Get Out On The Dancefloor” arrives via BMG after weeks of speculation and not-so-subtle hints from Groove Armada’s official social media channels.

It certainly represents a fresh sound for the band who made their name in the late 90s – you wouldn’t believe upon first hearing that the same artist’s back catalogue includes dance classics such as “At The River” and “Superstylin’.”

“Get Out On The Dancefloor” features vocals from Empire of the Sun and Pnau frontman Nick Littlemore as you’ve never heard him before.

His stream-of-consciousness lyrics might sound jarring at first, but the track grows on you as Littlemore’s seemingly random exclamations (“cash, cash, cash, it’s a cash society / what you gonna do about that?”) fuse together to form something more catchy and accessible.

Building the track, as Findlay’s bandmate Andy Cato explains, was something of a painstaking process: “It took a very long time to find the right order for Nick’s recordings, but once we had that line ‘get out on the dancefloor’ it felt vibey. Slotting the music underneath was the easy bit.”

Groove Armada have been teasing a new album since September last year, and have now confirmed that the as-yet-untitled LP will arrive in 2020.

It will be the pair’s first album since the acclaimed Black Light (2010) and their first full-length release since 2015’s Little Black Book.