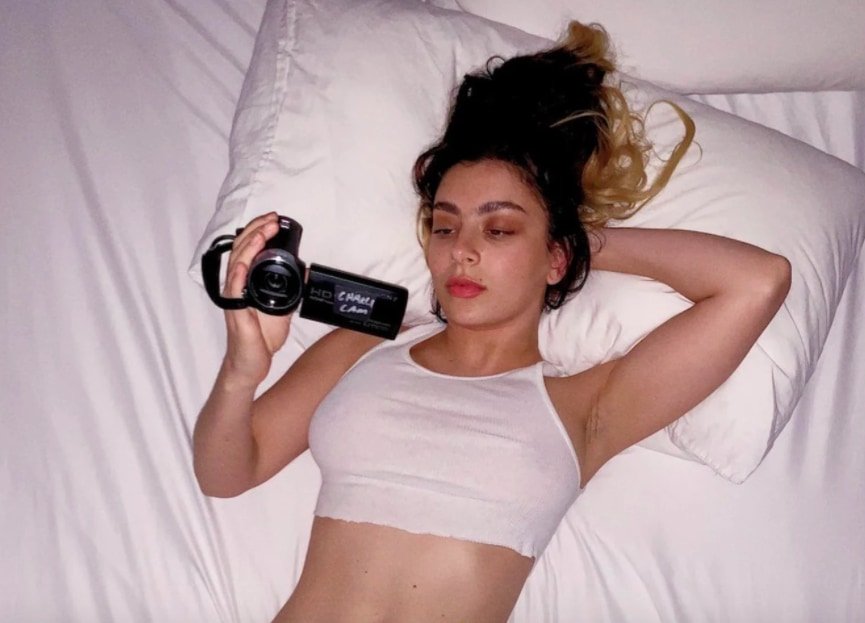 Although most of the world is on lockdown, Charli XCX has been working non-stop to put out a brand new album, titled how i’m feeling now.

Since Charli first announced on April 6 that she was working on a quarantine album, fans have been able to participate in Zoom calls to help her decide on cover art, song versions, and even provide clips of their own to feature in her music videos.

Despite the limited time period in which she created the 11-track album, how i’m feeling now is full of bangers and electronic bliss.

Unlike the imagery that the opening track, “pink diamond,” alludes to, the song is a hard-hitting and dynamic opener for the album.  The repetitive lyrics “I just wanna go real hard,” are definitely worth a bit of headbanging as the electronic production hypes the singer’s energy up. Lyrically, Charli sings about slaying the webcam game and wonders “in real life, could the club even handle us?” When you mesh the effect of the lyrics and electronic production together, the energy seems to match the intensity of the Netflix original movie, Cam. “pink diamond” is confident, yet isn’t afraid to show off its jaggedness.

The following track, “Forever,” was released as the first single from the album. This song is an ode for loved ones that are far away. “Forever” is very sweet, dreamy, and blissful. It captures the emotions many of us are going through with our far-away loved ones during the pandemic. Charli sings about how no matter what she is going through, no matter how far she is from this person, she will love them forever. Since the track is focused on love, Charli XCX wanted to make this video as inclusive for her fans as possible, so she used fan clips to share their memories pre-quarantine as well as during quarantine with their loved ones.

“Claws,” which was released as the second single, is a quirky and playful follow up to “Forever.” While “Forever” touches on the subject of love, “Claws” seems to be more of an infatuation. Charli’s voice and lyrics seem to recreate the butterfly feelings we have for new lovers in our life. Although she repeatedly sings, “I like everything about you,” she isn’t shy to list which specific things bring her joy about this person. It’s a cheeky and fun song that is sure to lift up your mood.

Switching gears a bit, “7 years” seems to ground our futuristic dreamscape. Charli XCX has taken the time to reflect on her own personal relationship during this time, and “7 years” seems to capture her findings. The way the song is introduced with solely her voice is powerful and raw. She describes how she is finally finding the clarity and the genuine love between her and her partner. Although they have been together for 7 years, she is now taking the time to explore her connection with her lover. Although this song seems to be grounded, compared to “Forever” and “Claws,” it still has a light energy to it.

So far, the songs’ connotations have been pretty positive as Charli XCX discusses love, confidence, and clarity throughout this pandemic. While this holds true for the singer, “detonate” brings forth a different notion of her time in self-isolation. It explores confusion and self-doubt as the instrumental replicates feelings of anxiety. Charli XCX’s vulnerability shines through as she sings lyrics such as: “I don’t trust myself at all / why should you trust me?” and “why should you love me?” The creator’s smooth voice expresses itself alongside a quick-paced, bouncy production. As the song starts to end, the speed starts to kick in and the listeners witness this track detonating in their ears.

Following “detonate,” “enemy” continues down the road of overthinking. Here, Charli takes the concept of ‘keeping your enemies closer’ and connects it to her relationship. She considers the possibility of her partner being her greatest enemy; considering her partner is the closest person to her at this moment in time. The two have been stuck in quarantine with one another, and as we learned from “7 years,” this is the closest the two have gotten. Sonically, the song has a cool vibe with a pop flow.

“finally I understand” continues the idea from “7 years” about having this particular time to understand her relationship. While the track is on the shorter side, it isn’t lackluster in content. This track portrays Charli’s realization of how important her partner is to her – he’s there for her through her hard times, and she is now feeling gratitude for it.

Fans of Charli XCX will and understand and love the track “c.20.” This particular song is a follow-up to one of her previous songs from her last album, Charli. “Click,” which featured Kim Petras and Tommy Cash, has been given a musical sibling with “c.20” as Charli reuses the same lyrics, but with a quarantine twist. This time around, instead of simply singing about how badass her clique is, Charli adds a heartwarming “I miss them / I miss them every night.” It was a smart move for Charli XCX to revamp a popular song of hers that was once about her friends but alter it to the current feeling of missing them during quarantine.

One thing Charli XCX wanted to do on this album was take one of her previously leaked unreleased songs and revamp it for how i’m feeling now. This ended up being “party 4 u,” which was an outtake from Charli’s mixtape, Pop 2. Like “c.20,” this song has a yearning to be with those who aren’t currently around. Filled with quick spitting lyrics, you can hear the longing in Charli’s voice as she sings “I only threw this party for you.” Charli XCX fans will be delighted to finally get an official version of this track.

“Anthems” is definitely a defining song of this pandemic. The first line, “I’m so bored,” is something that grabs the attention due to its relatability. She continues on to list things that we all have been doing while locked up, such as losing ourselves as we watch television, missing our friends, online shopping, and even crying “like a waterfall.” The repetitive chorus emphasizes how tired she is of this new reality and how she just misses turning up with her friends at night in New York City. This song is the epitome of how we are all feeling right now.

Finally, “visions” brings the iconic club vibe that Charli XCX is known for into the comfort of your own home. Lyrically, the song feels as though Charli has poured all of her emotions into this album and is telling us that these visions are what is getting her through this time. Being able to work on her craft and artistry has been like a lucid dream in this strange reality. The track ends as the production transitions from typical Charli XCX electropop into high energy rave music.