Alex Cooke·
INTERVIEWS
·May 11, 2020
Share
With an agile, impressive voice, JoJo has now been lighting up the pop world with her vocal acrobatics and raw, lush, and introspective tracks since she was only 13 years old when she became the youngest female solo artist with a number one hit with “Get Out.” Whether she is tearing it up with thick, layered vocals over catchy tracks or stripping down to bare acoustic essentials on introspective ballads, JoJo can easily step into a variety of musical atmospheres and create great songs.
Her latest release, Good to Know clocks in at 9 songs and 29 minutes, it’s short, but each track is well-crafted, showing off the singer’s ever-impressive vocal talents, her unabashedly direct and open lyrics, and her love of lush, soulful R&B, with each song forming a part in the larger journey across the tracks. JoJo is back and better than ever.

I loved the new album; it’s great. It seems to really have evolved musically from your previous work. What brought you to that point?
Just life. Well, I would hope that as we all get older and have more experiences, we naturally evolve, so I completely attribute it to anything other than just that thing that happens as we continue to change, you know what I mean? It’s been four years since my last album, and I’ve gotten more confident, more comfortable, and, and just brought more trust into the process.

Speaking of that, I noticed that the album balances these badass attitude tracks with these more introspective songs. How do you balance those two sides of you as a songwriter and a musician?
It’s not an effortful thing that happens. There’s this duality that exists within me where sometimes I feel badass and sometimes I feel contemplative, so I guess they both come out, you know what I mean? And I guess that dichotomy or that… Well, yeah, I think there’s often, what’s the word I’m looking for? The… I don’t know. Somewhere in the conflict of feeling like a total badass and then also being like, “Wait, but am I living my life right?” It’s where I exist.

There are a lot of strong themes and narrative arcs throughout it. What motivated you towards those themes?
I was doing a lot of introspection and retrospection after I got out of my last relationship. I set it on fire when I told my boyfriend at the time that I had cheated on him, and then the series of events that played out after that. I felt like I had to come clean. So, the arc of the album is me being at that place where I just wanted to be stimulated, I just wanted to get outside myself. And that’s essentially what led me to make the decision that I made in my relationship, to seek something outside of what we were, and then coming to a place where I was like, you know what, I’m always trying to look for something outside of myself.

Maybe I need to just completely be alone and learn to be comfortable on my own and feel confident, comfortable with myself, my own thoughts, and learn how to take care of myself, whatever that looks like. So, the arc has just really been my life over the past couple of years on a personal trip. It really had nothing to do with my career or anything. It was really just me finding myself as a woman and saying: “I don’t like some of the choices I’m making personally, and I want to make different choices, so maybe I need to take a step back and take a look inside.”

That’s fantastic. It’s powerful how you share that introspection with your audience.
Thank you. I mean, I’ve had a therapist for a few years now, and I’m sure that that has a lot to do with it. Because, I don’t know, I take a lot of accountability. I think it’s powerful to be able to say: “Okay, well, what did I do and how can I do things differently next time?”

Absolutely. Your vocal agility and your harmonies are really sharper and lusher than ever. How do you approach those in the process?
I love vocal production. That’s always been something that just really excites me. So, I really took that by the horns and was inspired by a lot of lush nineties R&B sensibilities, like SWV (Sisters with Voices) and even Janet. I love the idea of creating vocal environments. So, that’s some thoughts that I had, whether it was creating a pub type of ceiling with “Pedialyte” or something that’s more Jodeci inspired on “Lonely Hearts.”

So, tell me about the collaborators on the record. What was it like working with them?
Lido was one of the first people that was the cornerstone of this experience, and he became a close friend and someone that I really trust. I’ll even send him stuff I do with other collaborators, just because it’s nice to get the opinion of someone that you respect and have that comfort with. So, we were actually introduced because Aaron, who was the president of Warner and who’s a close friend of mine, he was like: “I think you and this guy Lido should meet. I just really have this feeling, because I know both of you, that you would really hit it off.” And then we just played music and talked about our inspirations and where we were coming from.

So, he started off this journey with me sonically, and then Doc McKinney came through. I went up to Toronto and worked with him and the crew that he had up there, with Myrna, who I co-wrote a lot of those records with, and with Dylan, who’s a part of this band that I really love. I can’t think of the name of his band right now, but he has this song. It’s very alternative, cool. He’s actually Raphael Saadiq’s nephew, which is super random, so he’s just been around musical excellence his whole life. It was just a really cool group of people up in Toronto that we were just making music every day.

We would start off our day with coffee and then conversation, and then we’d start making music. And then, lastly, the last finishing touch on this was 30 Rock, who was coming off of his crazy one with Roddy Ricch and the Box. I knew I wanted to have a real thoroughly freaky R&B record, and one of the things that we did together was come back, and then I sent it to Tory Lanez, honestly, just a couple months ago. And as soon as he heard it, he was like: “I’m definitely the guy for this,” and he sent me back his verse.

What’s your favorite song on the record then?
I know it’s corny, but it’s hard for me to say what my favorite record is because it’s all for different reasons. And since it’s a really bite-sized body of work, every song has its reason for being there. Yeah, I am sorry, I can’t, it’s hard.

No, no need to apologize! So, what are you currently listening to then?
Every morning, I start my day off by listening to “A Love Supreme” by John Coltrane. That’s just my mornings. That just makes me feel good. And I listen to this album by Nuyorican Soul. I’ve definitely been keeping up with what’s coming out and some new stuff, but I’m also going back to that which makes me just feel great, which is sometimes those jazz classics or Nas, Illmatic. What else have I been listening to? Even Megan Thee Stallion. I loved her mixtape that had “Big Ole Freak” on it. And so, everything from jazz to hip hop and then my girl, Victoria Monét, just put out the song, “Dive,” that I love on the R&B tip, Lucky Daye. So yeah, a mix of things like that.

Yeah, that’s a great mix. When we talked for your last album, you said if you could work with any artist, it’d be Bruno Mars. Is it still Bruno?
Oh, my God. I mean, I would love to work with Bruno Mars. But I don’t think there’s been anybody in the past decade who’s had more influence on the sound of music more so than Drake. So, it would be Drake with me.

That would be an amazing collaboration. So, what are you doing for fun during this lockdown?
I am cooking my ass off. I’m cooking and baking. I’m becoming a sommelier and a mixologist. Just getting really into different flavors and engaging my senses. My mom hates cooking, but she doesn’t mind cleaning. So, my mom actually just moved out to LA from Boston six months ago. So she’s staying with me while we’re all figuring out what our next steps are. So yeah, so I’ve just been trying new recipes out on her.

I’ve also been learning how to play the piano. My friends like Lido, PJ Morton, and Austin Brown, those are friends but also collaborators. So, they’ve been helping me learn piano virtually. 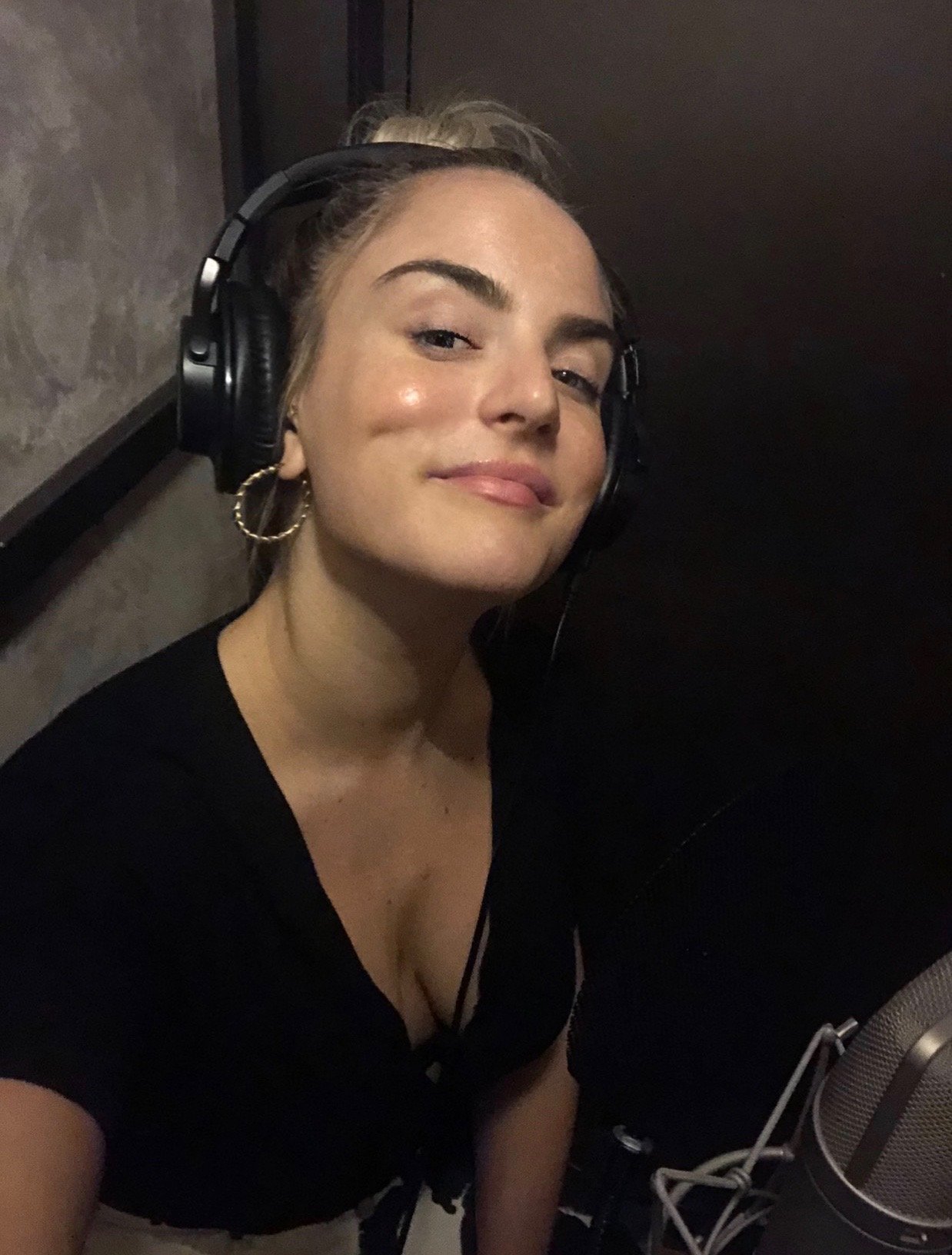 That’s super cool. What are you most excited about in life right now? What’s making you happy?
Any type of forward motion makes me feel really happy. I’m also learning Logic. As much as I’ve been obsessed with being in the studio and recording and vocal arranging and stuff, I didn’t have any understanding from an engineering perspective. So, having that type of forward motion where I’m feeling just a little bit more empowered on the technical side, it’s really great and it makes me feel good. And I’m excited to get this album out into the world and have people do with it what they want to do with it and then keep moving forward. Yeah, I just want to try to keep blinders on and certainly not look backward.

Fantastic. Are you earning Logic virtually too, or just on your own?
YouTube is a great resource, and one of my best friends has been showing me how to do that virtually.