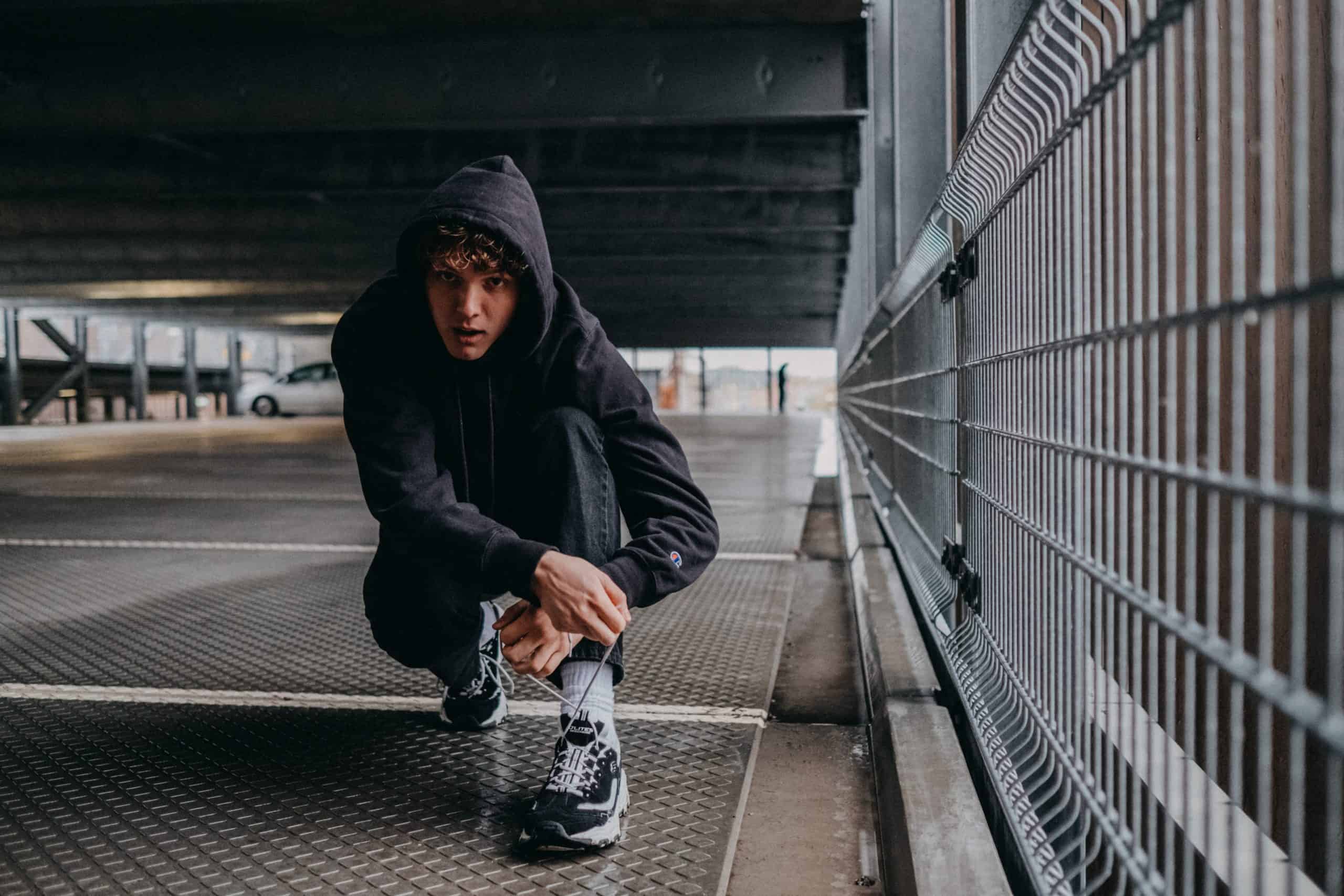 Swedish-born singer, producer, and multi-instrumentalist Robin Lundbäck has utilized the moniker of Boy In Space to facilitate a boundless sense of creative freedom. He emerged in 2018 with a trio of singles, including the tantalizingly addictive “Calfornia.” After displaying early promise, in 2019 Boy In Space unveiled “7 Up,” his breakthrough track which stunningly showcased his unique talent for combining the accessible with the intimate.

A string of singles have followed since the release of the nostalgia-laden “7 Up,” with his latest original release being “u and eye,” which sees him chronicle the inevitable failure of a relationship. Last week, Boy In Space released his innovative reimagining of Alphaville’s 1984 anti-war anthem “Forever Young.” Through the combination of Lundbäck’s emotive vocal performance and atmospheric production, he injects the track with a fresh vibrancy without eroding the song’s enduring resonance.

Speaking of the track, Lundback shared “This is one of my favorite songs of all time. It was written in such a crazy time for the world as a way to remind people to live in the moment and live life to the fullest. They were dealing with the threat of nuclear bombs, today we are all dealing with a global pandemic. The song has a message that is timeless for all generations and I’m proud to join the ever-growing list of talented artists who have covered it.”

We caught up with extraordinarily talented Boy In Space to discuss touring with Alec Benjamin, staying creative, his latest singles & more.

Since its release last year, your track “Cold” has gone on to be your most popular release yet. Did you ever anticipate that in any way?
When I wrote the song, I thought it was the strongest song out of the ones I had at the time. I definitely knew it was special in that way, and it was also my favorite song. So like, I’m super happy that people seem to enjoy that song the most as well

You recently supported the incredible Alec Benjamin on tour. How was that tour? I saw you in London and at moments it felt like it was your headline show
It was actually crazy. I did not expect that at all. Whatever city we were in I always got amazing support from Alec’s fans. It was just amazing seeing people like singing along to my songs. Some people knowing the lyrics and stuff like that was pretty awesome.

There were 18 dates and it was over a month. We got to go through the whole of Europe and every show was amazing. Obviously, there’s sometimes when the technical and audio stuff is just better but there was always a great crowd. I couldn’t be happier about how it went.

You collaborated with SHY Martin on “On A Prayer” and “Still The Same.” What was that collaborative process like?
I was working with a producer who works with SHY Martin as well and we wrote the song “On A Prayer.” From the early stages, we knew that it would awesome as a duet. I knew that he working was SHY Martin so I asked him to see if she wanted to be on the song. I’d met her before as well, but I didn’t know her that well.

He played her the track and she was excited about it. She also had the same situation with one of her tracks so then we were both like I’ll join yours if you’ll join mine. It was a lot of fun. She’s really nice as well and we’ve become really good friends.

Tell us the story behind “u n eye.”
We actually wrote it at the same time as we wrote “On A Prayer.” That week, I spent time with a couple of people and every day we just wrote like another amazing song and it was like just weird and incredible. “u and eye” kind of just fell into our lap. We played around with the guitar bit for like 2 minutes then we got started on melodies. I came up with the very methodical chorus pretty quickly and I was like “can we do that? It’s almost too much.” Then they were like “no, let’s just have fun with it.”

From your earlier releases to now, what are the biggest changes you’ve noticed within yourself?
I feel like I’m more and more going back to the roots of what I love and the roots do what I used to listen to as a kid almost. I find that very interesting. I feel like it’ll come through a little bit on the EP. Then on the next project, it’ll show through even more. With my sound, I’m not scared to try something new so you’re not going to get the same old story with me.

A lot of your tracks delve deeply into nostalgia. Why do you think you’re drawn towards exploring that in your music?
For me, it’s just natural. I think a lot of people are drawn into that sort of sound. With movies and music and whatever, it’s just the sense that things were better back then. I don’t know; it makes no sense. You can kind of romanticize what happened and focus on the good things and let the bad stuff sort of fade away.

When you’re making music, do you ever think about the intended audience?
If I’m on tour and I’m working on new songs, I’ll definitely do that. But now, especially in these times, I have plenty of time to write music so this whole thing has positive and negatives for me. I was supposed to be going on tour with Jeremy Zucker in May but that’s now been pushed to the fall. I also had some a headline show that we’re rearranging. Those delays have given me more time to write music and just be with myself as well. I think that time has allowed me to figure out more of what I want to write about.

Given what’s going on in the world, how does it feel to be making plans and trying to figure out the next steps?
In the beginning, it was really difficult because we put a plan together. We had everything scheduled and we were all really happy with it. So it’s definitely strange and weird because it feels like everything is on hold. I think you just have to try and see the positive in it. Like for me, it’s already allowed me to write more music and spend time with my family and friends.

“Caroline” is about that unreachable person which is sort of sad in a way but there’s an upbeat vibrancy. That’s obviously a common theme in pop music. How’s the process of working with producers to capture a song’s specific vibe?
When I was on tour with Alec Benjamin that song wasn’t even released yet but people seemed to really warm to it. With the song, my friend had the beat already. He played the guitar part and I just like immediately started singing melodies to it. The melody literally just came out straight away.

From the beginning, it had a cinematic feel even though the guitar was super hooky. The vibe of the guitar and the song was moody too. I tend to not go super positive because it’s hard to make a song that people connect with 100% if it’s super positive. Songs that are like “I love you, you’re best” don’t tend to go that well for me. So I just went down the road of depression I guess. (laughs) It kind of worked. With the message of that song, I feel like everyone has felt that way about someone at some point.

How do you know when’s best to release a specific song?
For me, I think it’s a matter of not holding onto the songs too much. If I love a song, I’m keen to release it as soon as possible. In a lot of cases, artists are like saving songs for like certain moments or when they have a bigger fanbase or something. That’s how I’ve heard conversations go in the past so I just want to release everything that I have. I just want to give it my all because I feel like that’s when you get the best momentum. I think it’s best to release songs you’re passionate about and that’s just gonna get the conversation going about your project even more.

How is the creative process of working with a team to interpret your songs into visuals?
I tend to visualize things when I write music so for me, it’s not simply because you have to, you have to transfer your ideas to someone else. The explaining part is difficult. It’s one thing to visualize it in your own head but it’s so difficult to express it to someone else without being able to draw or do something visually.

It’s just a matter of explaining well enough in detail so the director and the people behind the camera understand what you mean. As a new artist, I usually work with different directors all the time so for me, it’s a mission of finding a director that I have a really strong connection with. Like it’d be amazing for someone to know what I like visually. I think it’s just a matter of having a good connection with a director– I’m hoping to establish that in the near future.

What I love about pop music is the ability for it to be personal yet accessible – there’s something untainted the emotions embodied within pop. Do you ever encounter any difficulty combining an accessible pop sound with resonant lyricism?
I think pop is always misinterpreted as a thing that’s not natural or personal. Obviously I understand that because there’s such a money-driven industry behind it. There are also heaps of popular artists who just take songs that other people have written for them.

As a songwriter, I always sit down and write my own stuff. I can definitely be impersonal in like some songs or lyrics but I feel like when I’m actually being genuine, I would just gravitate to a pop melody. Pop music is just who I am, those are the melodies I live and breathe. If I was to express myself from the deepest corners of my heart, that’s how I would express it. It sounds so cheesy but it’s the only way I know how to express myself.

As you progress under the moniker of Boy In Space, what do you hope to stay true to?
I really hope I don’t do things to please others. If I start doing that, then there’s no point in continuing with the project anymore. I feel like I’d just be wasting my time if I’m not staying true to myself. That’s not what other people want anyway; they want to know what’s in my head and what I want to stay.

When I release an EP, I want it to feel like you’re listening to an old school album. I want it to be an experience where people want to listen to the project the whole way through. I’m really excited to deliver my first EP to the world and also to be able to release it and be proud knowing that my team and I did that.