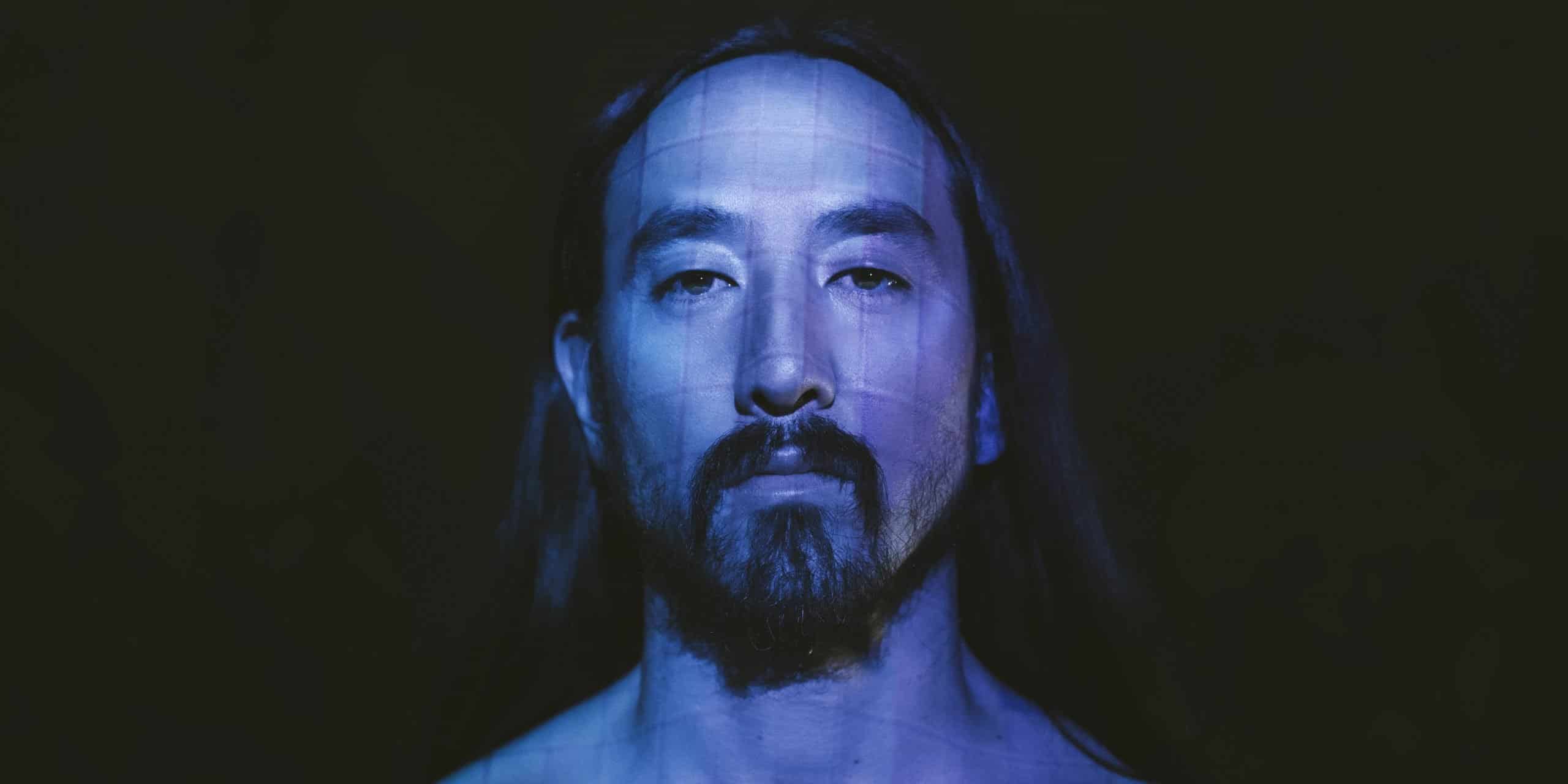 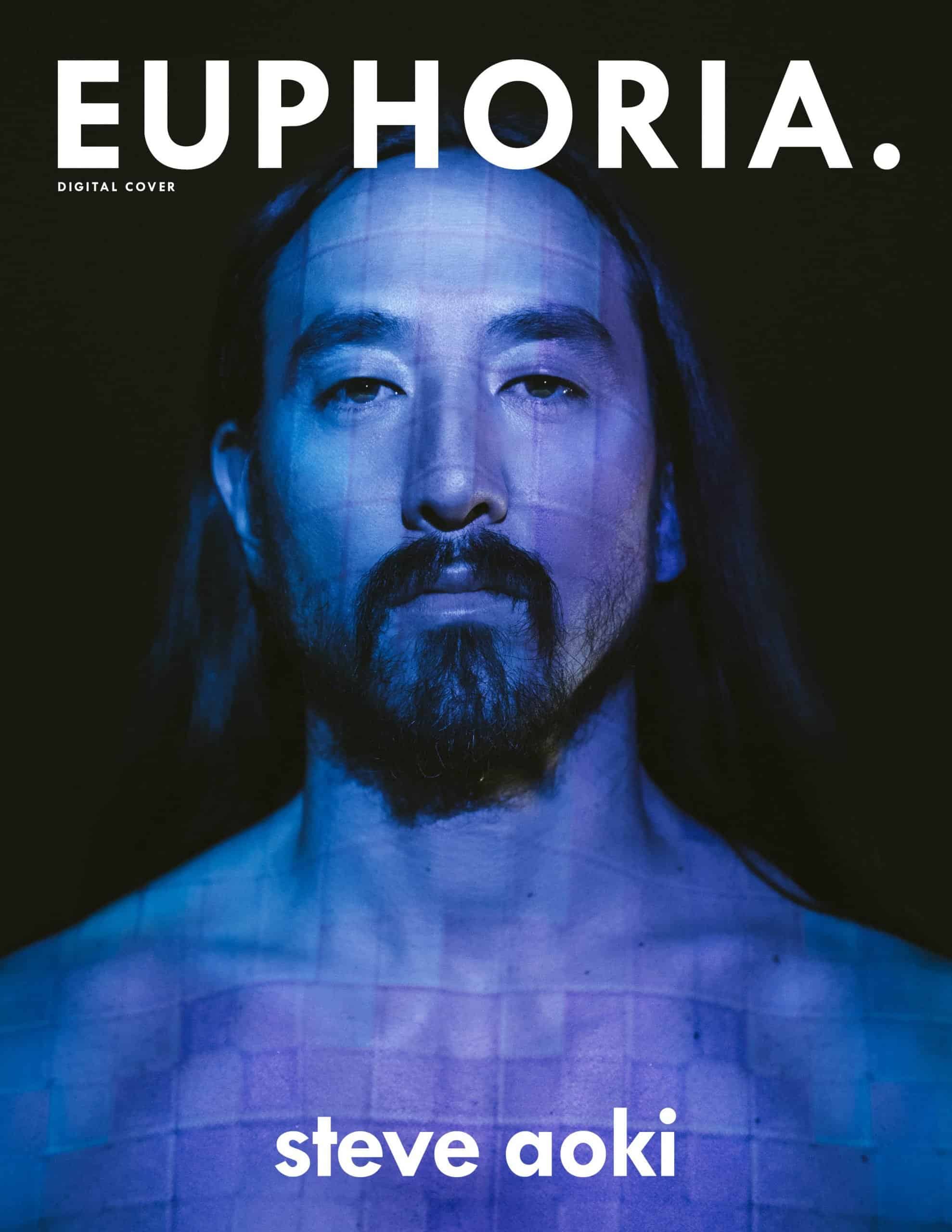 Steve Aoki is synonymous with EDM. The legendary creator is best known for DJing high-energy sets at some of the world’s biggest festivals and producing huge dance numbers with big-name features.

Aoki has crammed a lifetime’s worth of achievements into his two-decade career. He’s released six albums, collaborated with everyone from BTS and Louis Tomlinson to Flux Pavilion, Sting, and will.i.am. He’s earned a Grammy nomination and garnered billions of streams. It’s impossible to say that Aoki isn’t one of the top DJs in the world.

The hobby of DJing secret sets out of his college apartment became a career when Steve Aoki launched his indie label, Dim Mak Records, back in 1996. While nurturing signees such as Bloc Party, the Kills, Klaxons, Gossip, and The Bloody Beetroots, Aoki continued to perform music himself. Although it wasn’t until 2007 that he released his first compilation CD, Pillowface & His Airplane Chronicles. The album’s numerous features with bands such as Franz Ferdinand, Justice, and Bloc Party marked the beginning of a winning pattern of collaborating for Aoki. It slid straight into the Top Ten of the U.S. Dance chart.

While Aoki made his name in music, it isn’t the only facet of his career. The multi-hyphenated Californian creator also has an event and lifestyle company, a charity (The Aoki Foundation, funding research into degenerative brain diseases), an apparel line, and a memoir published last year (Blue: The Color of Noise). Many people would find it hard to find the time, let alone the creative energy to balance all those projects. But Aoki loves the logistical side of his projects as much as the creative side. “I’m very hands-on with my businesses and interests because I want to be. I enjoy the process, and I think that’s important. With anything you do, you have to love what you do, or else you’re going to kick it to the curb or kick it to the sidelines as you get busier.” 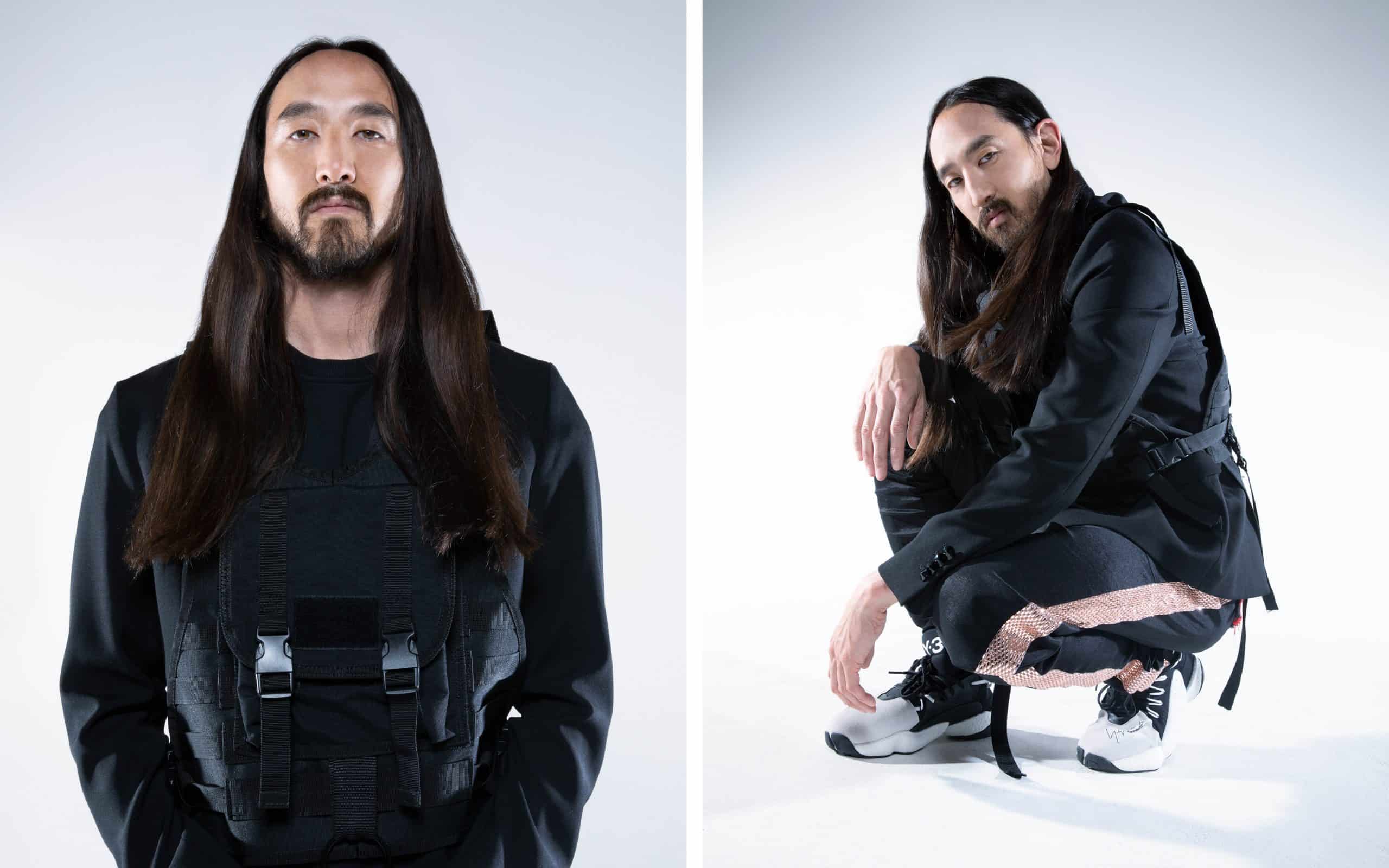 Aoki certainly isn’t letting the COVID-19 imposed isolation slow him down, either. His “content creation house” is kitted out with a downstairs studio, upstairs streaming room, and a gym that works as a DJ booth for his live streams. “I’m cooped up in Aoki’s Playhouse which is the perfect place to be quarantined because there’s so much activity here,” he says, “I just like to stay busy and stay active, and I’m constantly Zooming now and talking to my teams,” he tells us.

Amidst the pandemic, Aoki has released his sixth studio album, Neon Future IV. The 27-track record is “definitely an experience,” he says. While Aoki defines it as an “electronic album by nature,” the numerous collaborations bring a wide variety of “cultures, languages, sounds, tempos, and vibes.” Aoki says the album’s feature list is an “all-star playlist of artists from around the world,” and he’s not wrong. The album includes fellow EDM producers Slushii and Felix Jaehn, rappers Tory Lanez and Desiigner, Reggaeton superstar Maluma. He collaborated with some more surprising names, as well including Sting, the Backstreet Boys, and New Girl actress Zooey Deschanel.

While Aoki “would never spill the beans on [his] dream collaborator,” he does tell us that most of his collaborations start with friendship. He met Deschanel at a party, the pair continued talking after and decided they should “just make a song!” The collaborations “start with an interest in carving out time to work together as musicians and artists,” Aoki explains. “With Zooey, I love her voice, and I think she’s incredible; obviously, I follow her music career as well, and she wanted to do a song with me too, and so we said ok, let’s really make this happen. I brought this song to her, which I thought would fit her, and she loved it, and all the rest is history.” 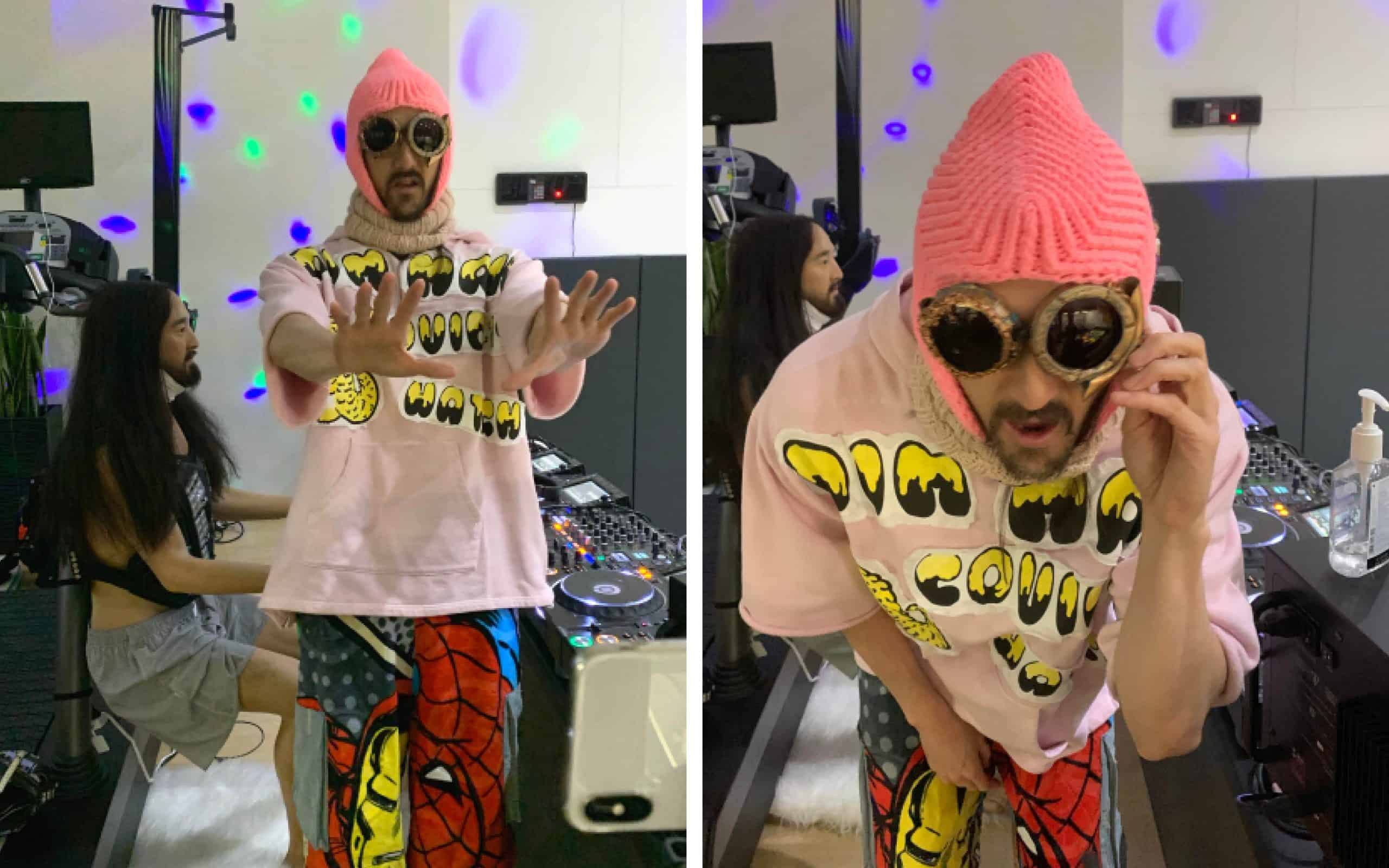 “Neon Future IV is a collaborative project, it’s just so much more fun to work with new artists all the time,” Aoki says of the features. “It takes a lot for me to work on multiple songs for one artist because as I’m working on one song, I’m already reaching out to three others and hoping to get collaborations. I reach out to tons and tons of artists, so many different artists you wouldn’t believe. I’d say more than 50% of them come up as projects that don’t get finished, and some actually we get to the finish line, and we can’t even release it which is sad enough, but yeah I love the collaborative process, it’s definitely my forte.”

“It’s an incredibly dynamic album: so many feelings and so many personalities that take you on this journey,” Aoki summarizes. “It’s a long story, and I call it a book. This is not one bite, this is a full meal.”

The glue that binds these 27 songs to the rest of the Neon Future franchise is the science-based songs, Aoki says. These are particularly important to him because of the integrity they provide to the album. “I’m really passionate about these songs and Neon Future, about a future where we accelerate to a stage where technology and humanity come together as one, and we can do indescribable, incredible things that will elevate the human species.”

Steve Aoki has previously described each of his albums as a “time stamp of [his] musical evolution and progress and creativity coming out.” But now, even before the COVID-19 crisis, people are realizing just how small the world is. This album, he feels, is a “global timestamp, more so than any other album” due to the range of origins of his featured artists. “Alok (Brazil), Alan Walker (Norway), Timmy Trumpet (Australia), Agnez Mo (Indonesia), Maluma (Colombia), Monsta X (Korea), Lay Zhang (China), Tory Lanez (Canada)… I mean, the list goes on and on and on, and the more I say these names out loud, the more excited I get, and the more I want more. Not just talking about cultures and countries and how global the sound is, I’m also talking about the genres of the music and how there should be no walls.”

In a time when so many collaborations are masterminded by label marketing teams, it’s refreshing to hear Aoki’s passion for curating authentic collaborations. As well as the range of musical talent featured on Neon Future IV, Aoki also paired with inspirations from other, more surprising, industries. On “Homo Deus,” Aoki teamed up with Professor Yuval Noah Harari, the Israeli historian, philosopher, and best-selling author of Sapiens and Homo Deus, the latter of which is one of Aoki’s “favorite books of all time.” On “Terra Incognito,” Aoki worked with Bryan Johnson, the American technology entrepreneur responsible for founding Kernel, a company developing advanced neural interfaces, and OS Fund, a venture capitalist firm that invests in early-stage science and tech companies. 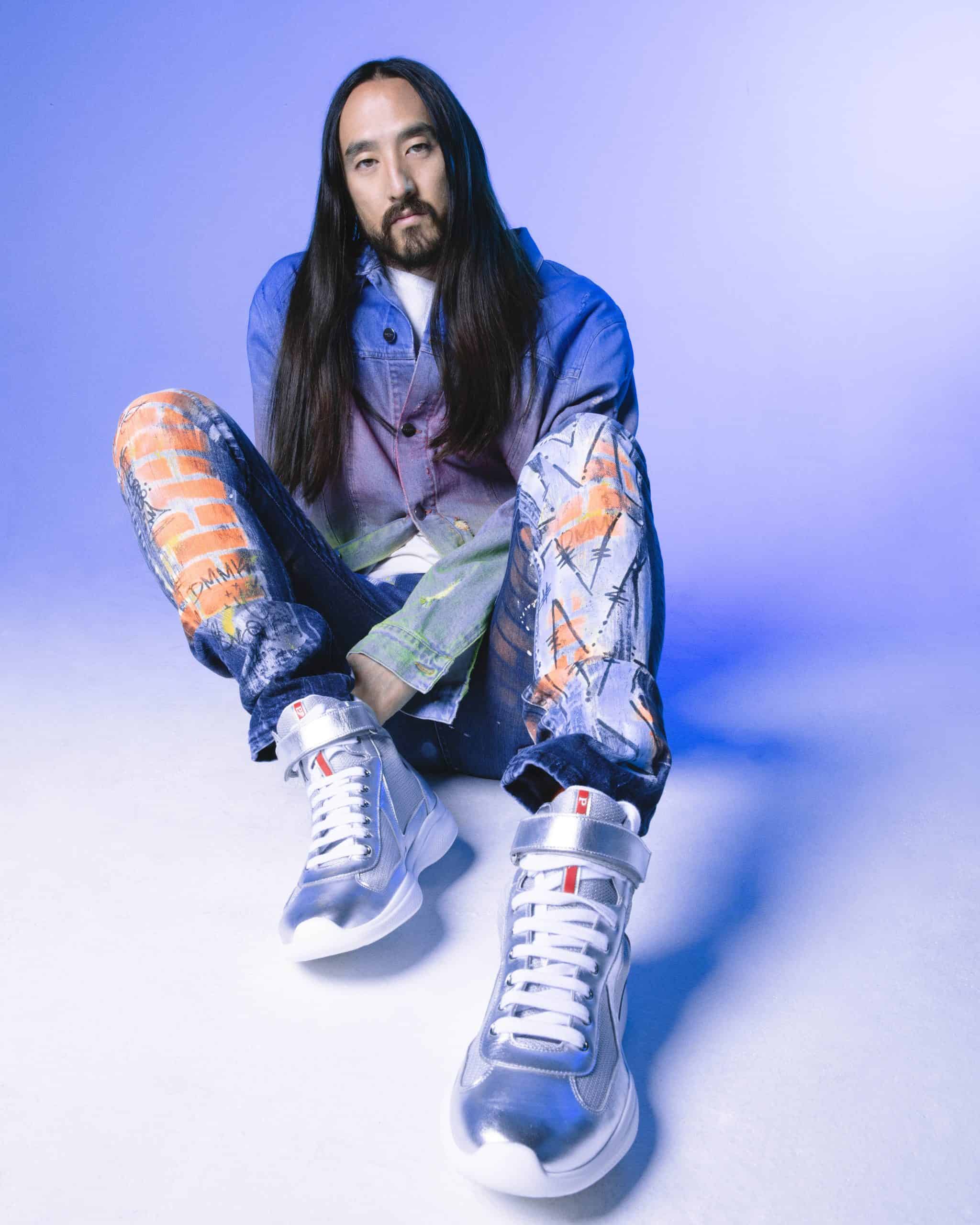 Despite the almost constant stream of creative output, it’s reassuring to know that Steve Aoki sometimes struggles with creative inspiration like the rest of us. “It comes, and it goes. Sometimes it’s gone, and I’m sitting there banging my head, and nothing is coming out, but I’m ok with that. I think I’ve been doing this long enough that I’m ok with that, but when I’m in a flow, I never want to get out of that.”

However, his advice for other creatives is to stay in that flow once you have it, even if it means missing sleep. “For me, that flow is everything,” Aoki says. “It’s absolutely everything, and you need to stay in it until that flow is gone.” It’s in this state that Aoki does most of his writing and producing. “If you’re at a loss, you need new inspiration, new influence, new inputs that you can plug into, and squeeze some of that creative juice out of your brain.”

“I tour a lot, and so I get to meet tons of people, and I get to hear so many different ways to make music,” Aoki explains, “and at the end of the day, that all subconsciously becomes part of the process.”

As a testament to the continuous graft Steve Aoki has put in across his career, he was recognized by Forbes as perhaps the “hardest-working” name on their 2016 ‘Electronic Cash Kings’ list of DJs thanks to the 198 shows he played in a single year. His fans have supported him away from his live shows as well, with Aoki racking up billions of streams over the years. But while success is often defined in numbers, Aoki defines it as finishing a project and being happy with the result. It’s then that he knows, “in my heart of hearts that I am proud, I am confident, and I am willing to show this side of me to the world, and finally, when I’ve signed off on that, it’s a big deal for me. It’s a huge deal for me to let that go to the world, and so at that point in time, that’s where the success should stay, and that’s the way it stays.”

“As much as I like to see a song get a hundred million streams or some other crazy number,” Aoki says, “I can’t define that as a success.” 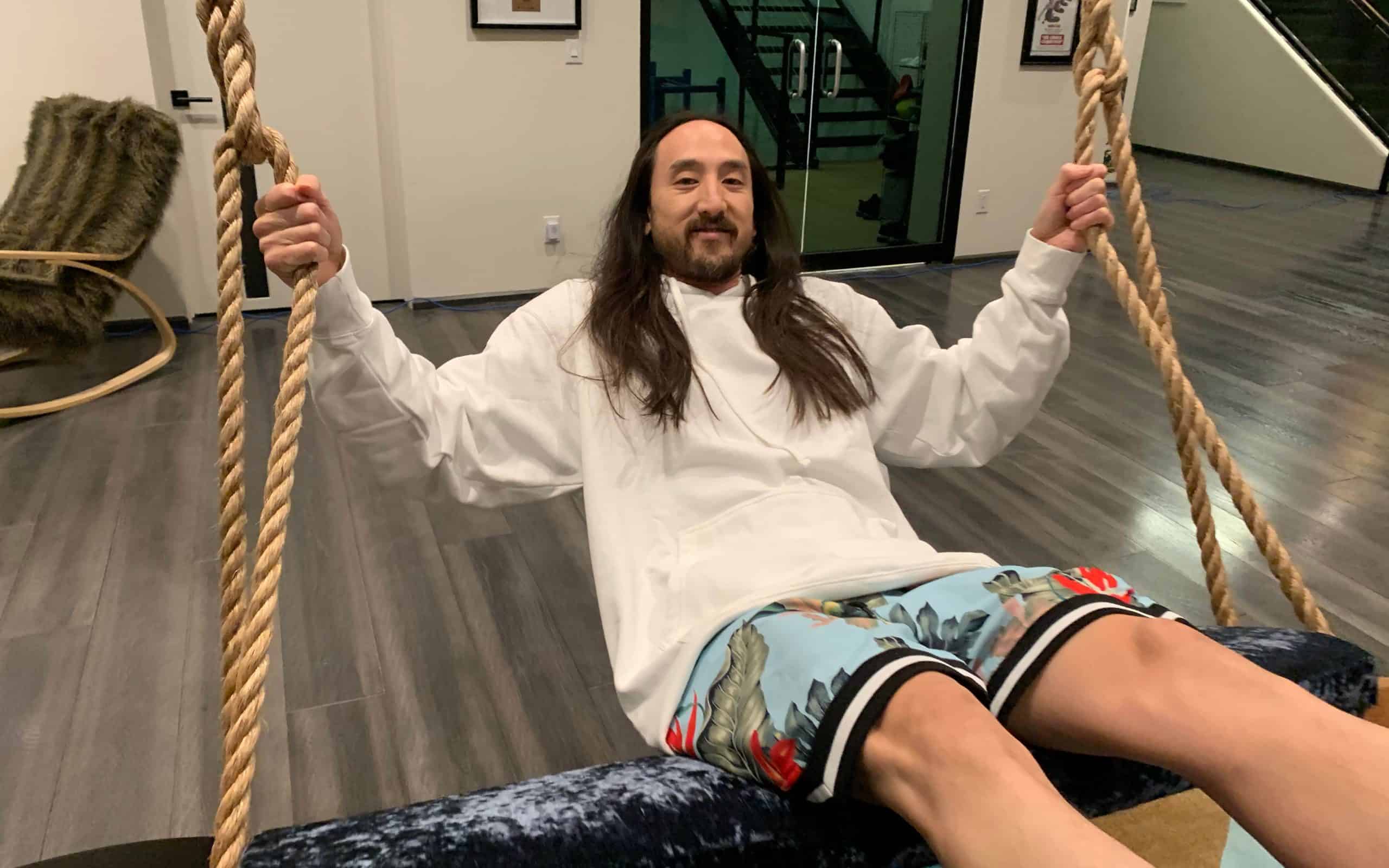 “Sometimes, I’m only a human being, so when something blows up, I’m just like ‘holy shit!’ and I’m feeling it too, but I try to stay as level-headed as possible. Especially for an album like Neon Future, it’s 27 songs, and you’re not going to have these traditional terms of what success should be on all these songs.”

“When you really boil down success, it shouldn’t be about numbers or stats or likes or essentially what other people think about you,” Aoki says sagely. If you do that, you’re “basically putting your emotions on a rollercoaster ride, and by the time the ride is over, you’re just so tired.”

Speaking of rollercoasters, Aoki has played at countless festivals over the years, including Coachella, Ultra, and Lollapalooza. However, it’s the Belgian electronic festival Tomorrowland that holds the most special place in his heart. In 2012, Aoki was racked with nerves as he was closing the main stage on the last day of the festival, an extremely prestigious and highly coveted slot. His late manager and best friend, Michael Theanne, had fought hard to get Aoki the place – “he fought for me like no one has ever fought for me,” Aoki remembers. The video of that set has now been watched over three million times. He’s gone on to play Tomorrowland every year since then. For him, the festival represents all the “incredible shows and the influence Tomorrowland has had in Europe for me and who I am out there, but also the memories I have of me and Michael and how hard Michael fought. It was Michael’s dream for me to play that slot…so I very much think about him when I think about Tomorrowland and how closely tied I’ve become with the Tomorrowland family since I started playing there in 2010. It’s all because of Michael. I have to give it to Michael.”

With such an expansive career and ever-growing energy, Aoki’s character indicates that he never looks back in regret. “You can’t turn back time, you know, you just have to move forward and accept all the things that have happened in your life as learning curves, learning lessons,” he says wisely.

“One thing’s for certain, you can’t learn without failure, so all the failures I’ve had have been big reasons why I’ve found that success. Even in success, you find tons and tons of failure, and so you have to look for it, that’s the most important thing, and grow from it and don’t let it drag you down.”