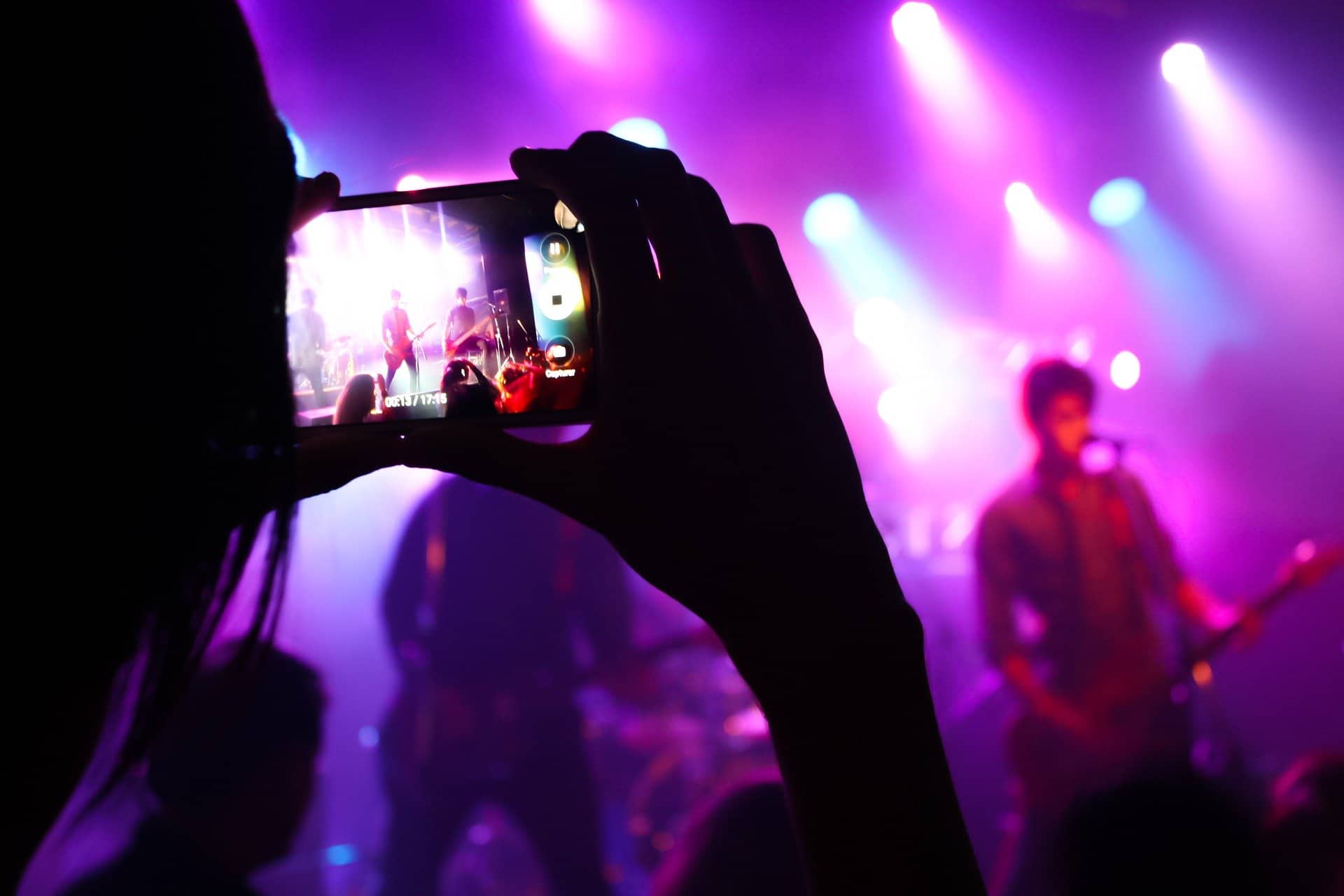 Party of One: How Coronavirus is Bringing Your Favorite Artists Closer

If you’ve ever spent time at a concert watching your favorite artist through the lens of someone else’s screen, you’ve probably come to the conclusion that live music and phones should have no business being in the same room. Well, think again.

In the wake of the Coronavirus pandemic and the resulting closure of clubs, pubs, bars, and stadiums, many artists have had their gigs canceled. To combat this, some have started hosting ‘Isolation Sessions,’ entertaining fans stuck in quarantine by live-streaming their gigs on social media, often from the comfort of their own homes. These live broadcasts have given artists such as Miley Cyrus and Yungblud the chance to showcase another skill and play talk-show host, inviting their celebrity pals to come on their channel for a sing-along and a natter.

Some of the highlights of these sessions so far include Chris Martin forgetting the lyrics to his own songs, country star Keith Urban going live on Instagram with a special appearance from his wife Nicole Kidman, and Robbie Williams doing an intimate topless live stream while singing along to his own tracks on YouTube.

Of course, as with any new trend, there have been some missteps. Most notably Gale Gadot’s star-studded cover of John Lennon’s “Imagine”, which many found well-meaning but quite distasteful, as celebrities discussing the pressures of self-quarantine while in their spacious mansions is a little hard to swallow from a cramped flatshare. However, on the whole, these efforts are allowing people to feel closer to their favorite artists than ever, offering an insight into their homes and daily lives, the opportunity to ask them questions, and the reassurance that whoever you are, we’re all in this together. 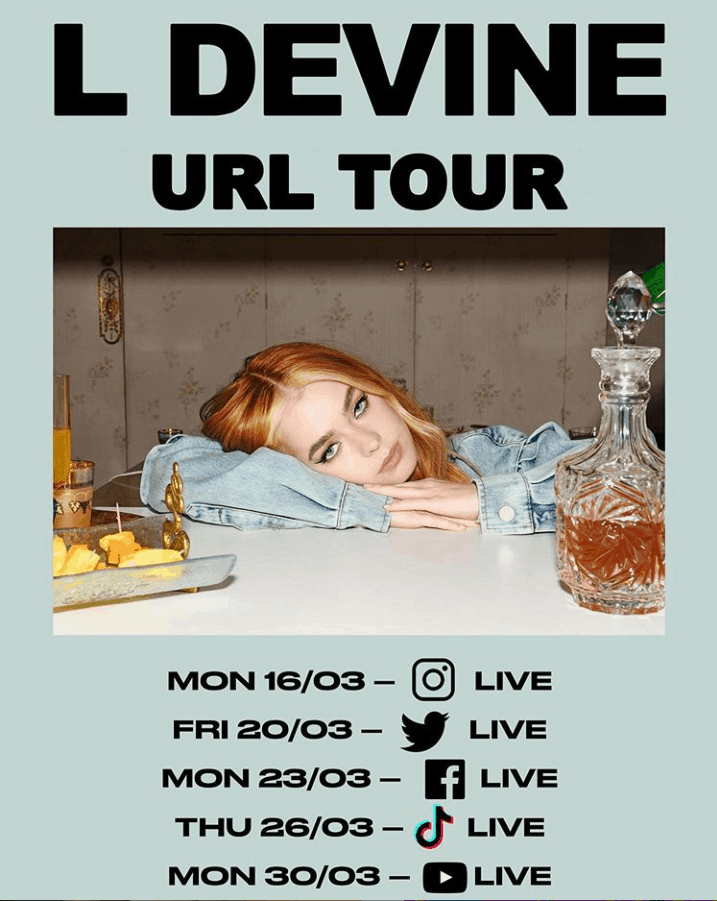 Some artists are going even further than a one-off stream. Pop duo Oh Wonder are playing one song a day for the next 36 days on Instagram live, while L Devine is making up for her canceled European tour by performing on a different social media platform each day. She tells EUPHORIA:

“I thought the URL tour was the best way to play shows for my fans and still be safe. By spreading the dates out over different social media platforms, it still feels like I’m connecting with different fans in different spaces, like I would be on my European tour in different cities. The response has been so heart-warming. Loads of fans reached out to me to say the first live show on Instagram really helped them with their anxiety and took their mind off things for a bit during this strange time.”

However, while these live streams are helping people feel more connected, they also serve to highlight the difficulties artists are going to face in the coming months. With the rise of online streaming, artists now make most of their income from tours, with ticket and merchandise sales supplementing their wages. For smaller artists, the closure of venues is a potentially devastating move and estimated losses to the live music industry as a whole total over $5 billion.

Until today, the UK government had previously not forced venues to close, merely suggesting that they are avoided. This meant that owners could not lay claim to their insurance, risking closure forever due to lack of funds. While the long-term effects of Covid-19 on the music industry are unknown, it’s set to have wider ramifications beyond the strictures of our time in quarantine.

Some artists are finding opportunities to monetize live streaming. For example, Metronomy’s bassist Olugbenga Adelekan is offering online bass lessons, although as these are ‘pay what you feel’, it’s unclear how much money he’ll be making. 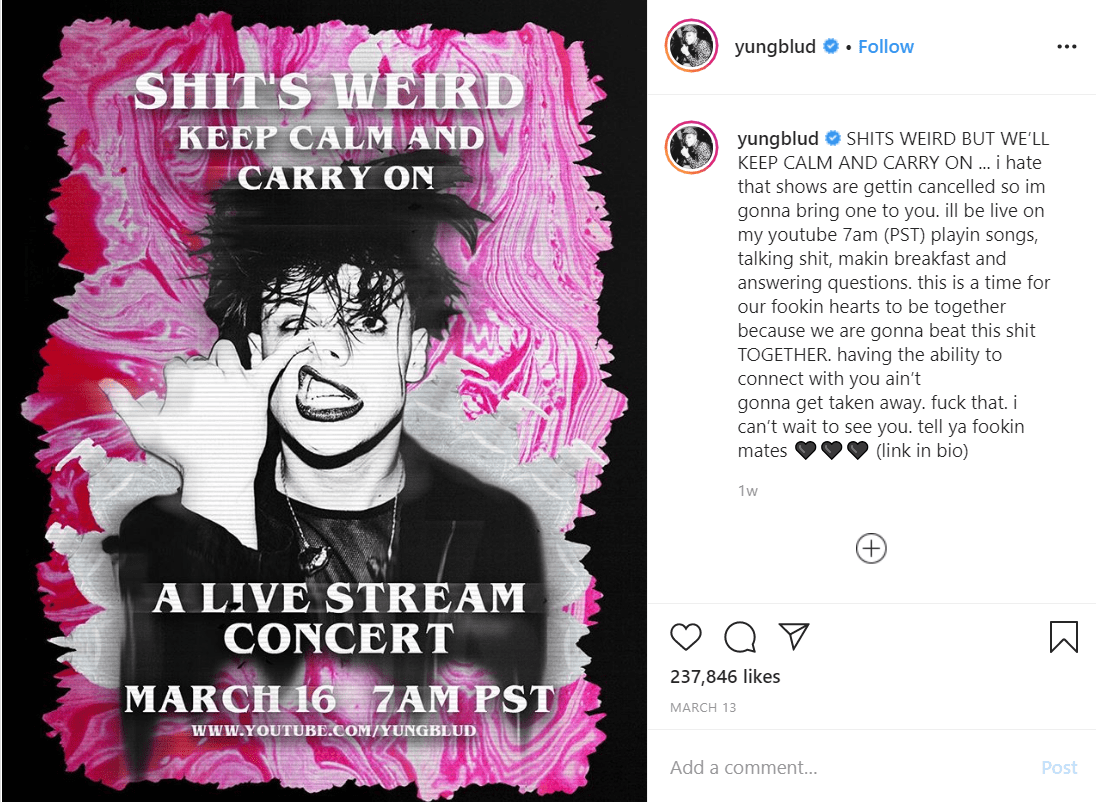 For both artists and fans, live streams are offering the unique opportunity to stay connected and supported in these peculiar times. As hip-hop artist Common recently wrote after live streaming a performance to raise money for WHO’s new Solidarity Response Fund, “If anything, let this time show us how dependent we are on one another and how interconnected we are. We need each other. We are so much stronger and courageous together. The people united will never be defeated.”

After all, no man is an island, and certainly, no musician is.

Some upcoming unmissable live streams include: