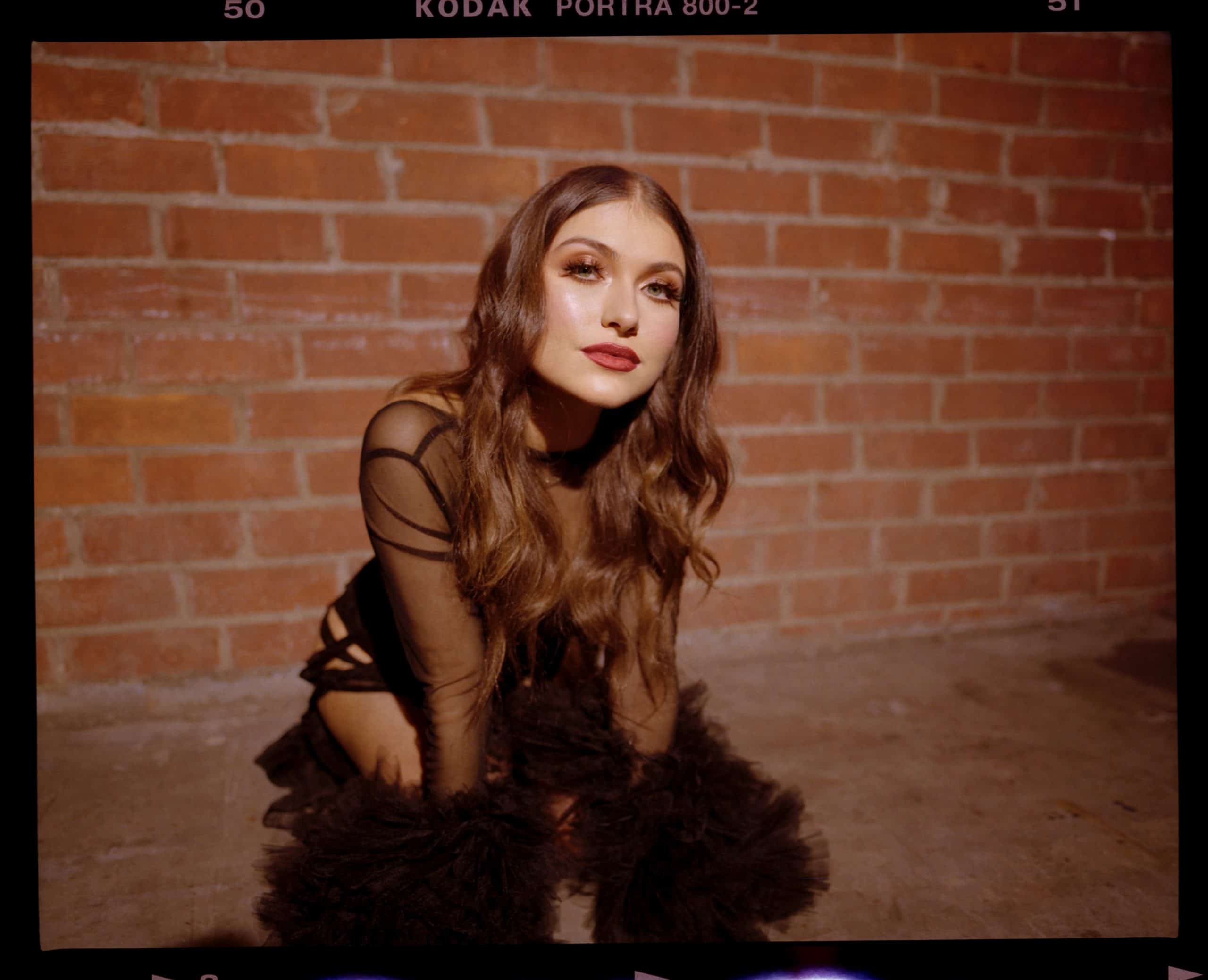 Elle Winter is ready to be the next voice of female empowerment in music. The 20-year-old singer, whose debut EP, Yeah, No, just dropped on March 6, lays everything out in the six-track album, and I sat down with her over coffee, tea, and smoothies (yes, all of them) in New York City the day before her big debut to find out what motivates her music and how she balances her busy life with school.

“I wrote [“Yeah, No”] in Nashville, and at the time I had just gone through this breakup, and I had this ex-boyfriend who would call me to check-in and be like ‘Are you OK? I’m here for you,’” Elle said of the title track on the EP. “We were together a while — don’t you know I’ve never been that type of person? I’m not upset. It was a great relationship, and it was what it was, but I’m not sitting at home crying. Stop being condescending. Don’t tell me you’re here for me. I found it almost patronizing.” And her feelings of being strong and rising above an ended relationship are at the forefront of this catchy anthem. With lines like “You’re oblivious, clueless, frankly kinda stupid” and a chorus that centers on the phrase “yeah, no,”  it’s clear that Elle wasn’t about to let this breakup bring her down.

In fact, Elle’s been performing this song for months, including on tour with In Real Life and Asher Angel and at a handful of radio shows, always sharing her message of empowerment with her fans and listeners. The video that accompanies the track, directed by Bobby Hanaford, features Elle and a badass group of female dancers in a warehouse in Los Angeles, making the most of the time together — no guys needed. “I want the song and video to create a sense of solidarity among women who are able to find strength and confidence in themselves even as they are belittled by others who think they need them to thrive, when, in fact, yeah, no, they don’t,” Elle said.

Elle’s a bundle of nerves and excitement during our chat — the anticipation of her debut EP hitting her in all the feels. “It’s really cool to put out a whole body of work,” she said. “I’m ready for it to just be out!” But the nerves and excitement didn’t stop the native New Yorker from gushing over her family’s new Australian Shepherd puppy Skye that she wants to “kidnap and take back to LA” with her and rave about some of her favorite foods. “My sister and I made an Instagram account for Skye. We’re trying to make her into some kind of influencer,” she said and added that she just learned about pet influencers being a thing after posing with some famous dogs at her Christmas radio shows. “There were dogs backstage! Instagram-famous dogs!” she said.

At the cozy cafe where we met over drinks — a cappuccino for her, as well as an iced matcha from down the street — Elle opened up about why the empowerment message in her music is so important to her. “My favorite artists are the ones who make me feel strong or connected to what they’re going through and I want people to have a similar experience when they listen to my EP and “Yeah, No” in particular,” she said.

While “Yeah, No” is the boldest message on the EP, she shared that she feels the rest of the EP is just as empowering, though in a more subtle way. “My other songs are empowering in the sense that being vulnerable and accepting your emotions and embracing them is actually empowering.” Each song on the ultra poppy EP is just as uplifting as the last and would be the perfect backing track for your next girls’ night in or out. And while “Yeah, No” has been a favorite of mine for months — ever since hearing it live in late 2019 — with its in-your-face beat and anthemic feel, “110%” crept in as a new fave. “‘110%’ is about not settling for bad behavior!” Elle shared. “That’s what makes that one empowering. There’s even a line like ‘I wanna be the one you want to meet your mom.’ Like, put in 110% effort!” she said.

Elle added that what she loves so much about this EP, other than all the people she worked with, including production duos The Orphanage and The JAM, is that some of these songs were already out in the world. “Fans can revisit some of these, like ‘Cave In,’ which is cool for them, but now the songs are also on this EP officially with some unreleased tracks,” she said. These fans, who Elle is always excited to make music for, have been along for the ride through her career since she was discovered by Radio Disney at age 14. She steadily built up her music career before signing with Sony Music’s The Orchard last year.

The bubbly singer, who seems to always have a smile on her face, just moved to Los Angeles this year after being born and raised in New York City. While it may be hard for some native New Yorkers to ever see themselves outside the concrete jungle, Elle said LA already feels great to her. “I’m so inspired there; there are so many other creatives in LA,” she said. “I moved there for my career and to record more music, and I think it’s going to be really good for me. All the studios are there and incredible people to work with.”

She’ll be using those studios in LA to work on her debut album, which she’s currently writing. She even spent a couple of weeks in Stockholm, Sweden, earlier this year recording new music. Sweden has long been known as a mecca for pop music, with many A-list artists recording music in Sweden or working with Swedish producers. It’s a country that values music and that Elle said is very regimented in its work ethic. “They take it seriously in Sweden. Every session started with a melody and we built from that, and what we created is amazing,” she said of her time recording.

This is going to be a huge year for Elle. She’s already made her big cross-country move and dropped her EP, and now she’s hoping to go on tour… as long as she can push school off a little bit longer. She’s currently a student at the University of Pennsylvania but took this semester off to focus on her music. “Last year I was trying to do my music and be in school and I wasn’t giving my full attention to either one, and I didn’t want it to be like that,” she said. “Penn will always be there, but right now is the time to focus on my music, so I’m taking a little break from school.” Lucky for her, the school is willing to work with her schedule and let her take the breaks she needs and come back when she’s ready. “Or I’ll just get an honorary degree later in life if I can’t finish now,” she joked.

As we finished up our drinks and she prepared to set out on a lengthy day of promo for Yeah, No, I asked Elle what she was going to do with her evening to keep her busy before the big midnight release. “Maybe a nap? Should I pull an all-nighter? I have to be up early for Good Day New York! I’ll maybe do a little manuka honey. I don’t know!” It’s easy to get swept up in her excitement and I wished her well as she happily strutted down a busy New York street to her next meeting. With a debut EP as fun and powerful as Yeah, No, I think she’s got every reason to be excited.