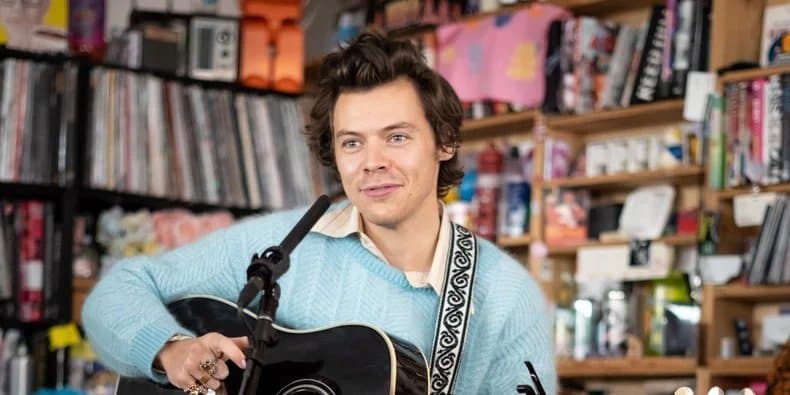 Harry Styles’s NPR Tiny Desk Concert couldn’t have come at a better time — while the world is on hold due to the coronavirus outbreak and most people are quarantined in their homes, we could all use a little bit of joy.

The 26-year-old British singer took a seat at NPR’s famed tiny desk for a four-song acoustic set, accompanied by his band. He started his set with “Cherry,” one of the slow and heart-wrenching songs from his second album, Fine Line. The stripped-down quality of the song made it even more haunting than it sounds on the album. This is a song he’s only performed two other times since the album came out in December — at concerts in Los Angeles and London — which made it a treat for fans who weren’t at those shows.

Styles then moved on to “Watermelon Sugar” and “To Be So Lonely.” With both, he gave a snapshot of how the songs came about. He said he’d been working on “Watermelon Sugar” since 2017, when he was on the first leg of Harry Styles Love on Tour, and spent a long time actually not liking the song before deciding to add it to the second album. His story about and performance of “To Be So Lonely,” though, made this song move way up on my list of favorites.

Styles handed a lot of the writing credit of this song to his guitar player and friend Mitch Rowland, while also jokingly pointing out that he rarely speaks. “He has a habit of not speaking a lot, and every now and again, he’ll kind of go, like, ‘Oh I have this idea.’ And he sent me a voice note and it was essentially the whole song,” Styles said of “To Be So Lonely.” He said he then just sat in a corner with some headphones and wrote out the melody and lyrics and it was done pretty quickly.

It was his next bit of the story, though, that really sold the song. There’s a line in it that goes, “I’m just an arrogant son of a bitch, who can’t admit when he’s sorry,” and Styles said that for some reason, it’s the line the fans scream back at him when he performs it live. (I’ve seen it in action and can confirm that it is absolutely true.) So then of course as he played the stripped-down version at the tiny desk, he, of course, smirked every time he sang that line. The story and this performance gave the song a new life, and I think it sounds so much better on a smaller scale than in an arena and even on the album.

“Adore You” was the final song of the set, which Styles said is about a fish, as in, the one in the video. He expanded on the real story and said it’s that feeling of newness with someone you’ve just started seeing and you’re so excited about it. He and the band gave a stellar performance of the song to wrap up what was an incredibly low-key show.

Styles is someone who has played stages of every size all over the world, and the ease with which he can still sing beautifully behind a desk in an office goes to show how deep his talent runs. I only wish the Tiny Desk Concert had been longer but loved it all the same.

In these quarantined times, @HarryStyles just wants to adore you. In the comfort of your home. After you wash your hands. The best thing is, you can turn it all the way up as you work from home! Listen to the full set at the link in bio! #tinydesk #nprmusic #npr