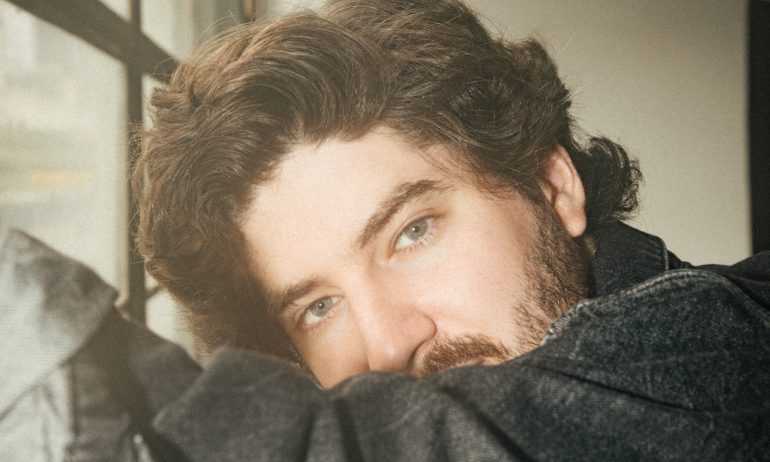 Los Angeles-based musician Shoffy just dropped his album Flash on March 13, packed with moody tracks about relationships and being a homebody. The album also includes his killer hit “Tricky,” which he made with pop songstress Sabrina Carpenter. We caught up with the financial-analyst-turned-streaming-superstar to chat about working with Sabrina, his rescheduled tour, and the response from fans on his new music.

“Tricky” is SO good. How was it working with Sabrina on it?
Thanks so much! It was great working with her! She’s really down to earth and super talented. We cut the vocals together at the studio, and it was really a quick process. So happy how naturally the song came together with her vocals, and she really brought it to another level. I’ve been a fan of hers for a while now, so it was awesome to get to collaborate on something.

What’s been your favorite song to write so far?
I don’t really have a favorite, but it’s cool to see how people have reacted so far to some of the new singles off the album — “Tricky,” “I Can’t Help,” and “Bedhead.” “I Can’t Help” was pretty fun because we flipped the Elvis Presley song, and put a new interpretation on it.

How do you feel like your music and your songwriting process have evolved since you started?
I think as I continue to write songs and produce, I’m improving overall. From the beginning, I’ve messed with a lot of genres and pulled what I like. But I do think over time it’s getting more refined — how I go about writing lyrics, making beats, finding the right melodies.

I know you’ve said Flash is about relationships and being a homebody — what are your favorite things to do at home?
With everything going on right now, I think everyone feels like a homebody. I’m working on new music, reading Sapiens, and watching Narcos.

Who have been your musical inspirations?
Inspired by a lot of artists, including John Mayer, Frank Ocean, Diplo, and Marina. Whether it’s lyrically through artists like Frank Ocean, or blues guitar from John Mayer, or production from Diplo.

What made you decide to go into music full time?
I put out a song called “Different Skies” independently through my label Otherground Records. I wrote/produced/mixed/mastered the song, and used Distrokid to distribute it. When it started streaming and getting playlisted a lot on Spotify, that was a big turning point for me and I was able to transition into music full time!

You’ve done some great collaborations already, but who are some of your dream collaborators?
Would love to work with John Mayer, Frank Ocean, Diplo, or Marina. I really dig each of their styles and think we would be able to make some awesome music together.

What’s been the response from your fans so far in regard to this album?
I’ve gotten a lot of kind words from fans! “Tricky,” “I Can’t Help,” and “Bedhead” seem to be getting the most attention at the moment. I have also received feedback from people saying how relevant the album feels right now with everything going on, with songs like “Home Alone” and “Homebody” and the general vibe of the album being a bit darker.

Music is a hugely different career from the finance one you left behind. Did you always want to be a musician?
I’ve always wanted to do music full time. I’ve been singing and playing guitar and piano since I was 3 or 4, and writing and producing since I was about 14. The streaming landscape in music today opened the door, and I’ve been riding that wave since.

Tell us about your songwriting process — does it vary? Are you a words-first person? The melody? Or just a big idea?
It definitely varies, but for the most part, I start with a chord progression — whether that’s on guitar, synth, or piano — then build the production around that. Vocal melodies come after, and finally, I lock in the lyrics.

Where do you usually find inspiration for your music?
From all sorts of stuff — things I’m going through or past experiences, or friends have gone through. Also soaking up TV, movies, and music I’m listening to.

You’ve played shows all over — what’s your favorite city to play in?
Hard to pick a favorite, but San Francisco and New York have been good to me, Chicago was also a blast last tour. Really every city though has been so great — I always feel very welcomed and at home. It’s so cool meeting everybody and hearing how the songs have impacted them and how they even found my music in the first place. We ended up having to delay my upcoming tour due to the coronavirus, but I’m really looking forward to seeing everybody out on the road in July and August and performing live again. In the meantime, I hope everyone focuses on staying safe and healthy.

As someone who has done it, what’s your advice for someone who wants to quit their job and chase their dreams instead?
I’d say just keep at it, stay dedicated to improving, and finding the right people to help support you. Even if you have a day job, try to carve out time on nights and weekends to pursue it.