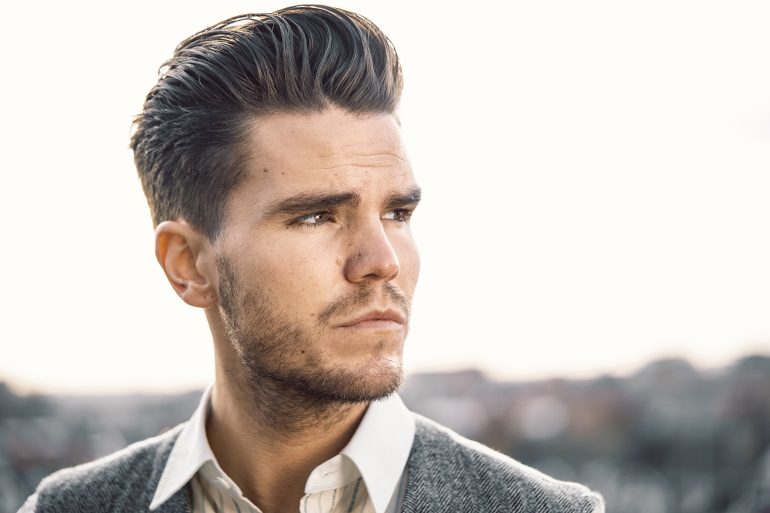 When a handsome, Icelandic rockstar walks into the room in a reserved manner but fizzing with talent, you have to take a moment to appreciate the randomness of genetics and just how unfair it can be. JJ Julius Son, the lead singer and songwriter for band KALEO, has a quietness about him that doesn’t indicate shyness, but rather underpins confidence. 4 years have passed since their last album, but the time is almost here for the next chapter. Today, Surface Sounds has been announced for release on June 5.

In a small but attractive room on Atlantic Records’ floor in London, I sat opposite JJ and we chatted. What started as a formulaic interview soon crumbled into two people fervently discussing music, and by the words said, you wouldn’t have been able to tell which of us had all the stresses and challenges of a successful global musician’s life. JJ’s passion for music is a rich vein that seems far from depleted.

2016 was the year KALEO steamed onto the scene with the album A/B and its wealth of tracks that accrued accolades from GRAMMY nominations in the case of “No Good,” to the ubiquitous song “Way Down We Go” which has in excess of 1 billion streams. Even the few unfamiliar with the band recognize immediately the hooks from this album. And it’s A/B that prompted a staggering 3-year non-stop tour, which sounds akin to having no fixed address as opposed to a musician on the road! “It takes its toll and I think I burned out there for a second. It can be challenging vocally too and then traveling by bus trying to sleep,” JJ notes. But they’re back and vibrant, make no mistake about that. 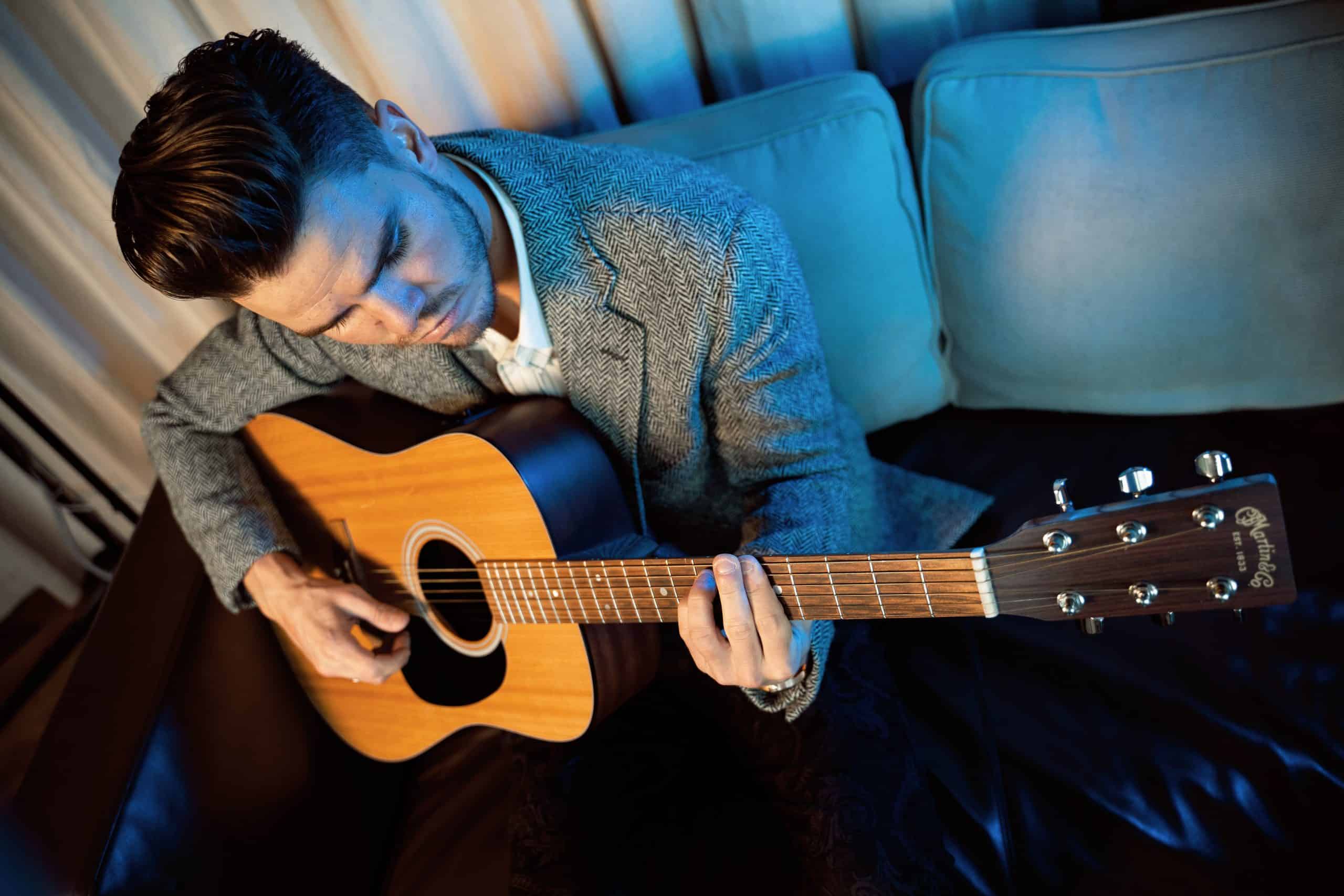 JJ and I sat on a corner sofa and the interview began to blend with a photoshoot which is where the real insight was hiding. To his right was a guitar on a stand and after a few portraits he offered to play it, partially for the shots, but I suspect also for the love of it. His demeanor changed the moment he held the neck in one hand and plucked at each string, adjusting the tune. It seemed a little as if he’d bid farewell to acquaintances and stepped inside his house and exhaled. He put on a brief improvised concert to the few lucky enough to be in this room overlooking the uniform white accommodation of Kensington and the contrasting grubby train tracks that cut through it.

There he was, jetlagged and with a guy he’s just met taking photographs of him, and he was still gladly making music, unprompted. JJ admitted that while touring for three years, he would jump into local studios on his off-days between gigs even though he could have done with a rest. His raw talent is undeniable, but it’s hard to imagine it would have resulted in the success KALEO has achieved had it not been paired with a bottomless well of passion and work ethic. “I even had a portable rig so I could record on the bus as well. I would literally finish a show at night and then get on the bus and start editing,” JJ recalls.

These off-day studio sessions spanned the globe, with time spent in Greece, Spain, South America, and of course, the bus, to name a few. This determination to work on the project whenever he could, and moreover, wherever he could, colored the forthcoming album and JJ believes it has added different flavors to tracks. However, his basecamp at Nashville will always hold pride of place for recording music with the band, and he believes it to be the best place to record music in the world: “It’s not too big of a city and once you’re in the [music] circle, it’s like being back home in Iceland: everybody’s just a phone call away. You can get any great session musician to come and play. Some of these session players are astonishing.”

I wondered what it must be like transitioning from that small town in Iceland into a global musician. “Moving from a country of 300,000 people to the U.S with 320m was really strange first and foremost. I didn’t know what to expect. You know everyone in your hometown and then you spend years traveling. It’s a totally different lifestyle you have to adapt to and I still am adapting.” The notion of being plunged into a sharp change is something familiar to KALEO musically too and the new album promises more of that.

The clear diversity in KALEO’s music is fast becoming a hallmark of their sound if it isn’t already. One moment you’re floating on a small Icelandic iceberg drinking in the tranquillity, then suddenly you’re hit with an invigorating rock and brilliantly messy distortion. The two new tracks retain that thread of soft, folksy blues and then hard-hitting, gravelly rock. I Want More has a stronger folk vibe than most, complete with melodic whistling, and “Break My Baby” brings about that cinematic, classical rock sound many fans are drawn to. JJ admitted he wanted to explore this contrast more in the upcoming album and it was easy to see why.

As I motioned for a change of location, JJ stood up, replaced the guitar on its stand carefully, and walked over to the upright piano. You see although his influences of delta blues and timeless rock are self-evident, he started out learning classical piano. His love for Ray Charles and The Beatles, handed down to him by his parents, lead him down a long path and he just kept going. “From there you have the delta blues of Muddy, one of my favorites is Son House, and Robert Johnson. But we owe a lot to Alan Lomax for his field recordings and they’re something I really cherish. For young people today I’d recommend you take your time, go back and explore. The best thing about today’s streaming services is you can find anything.” 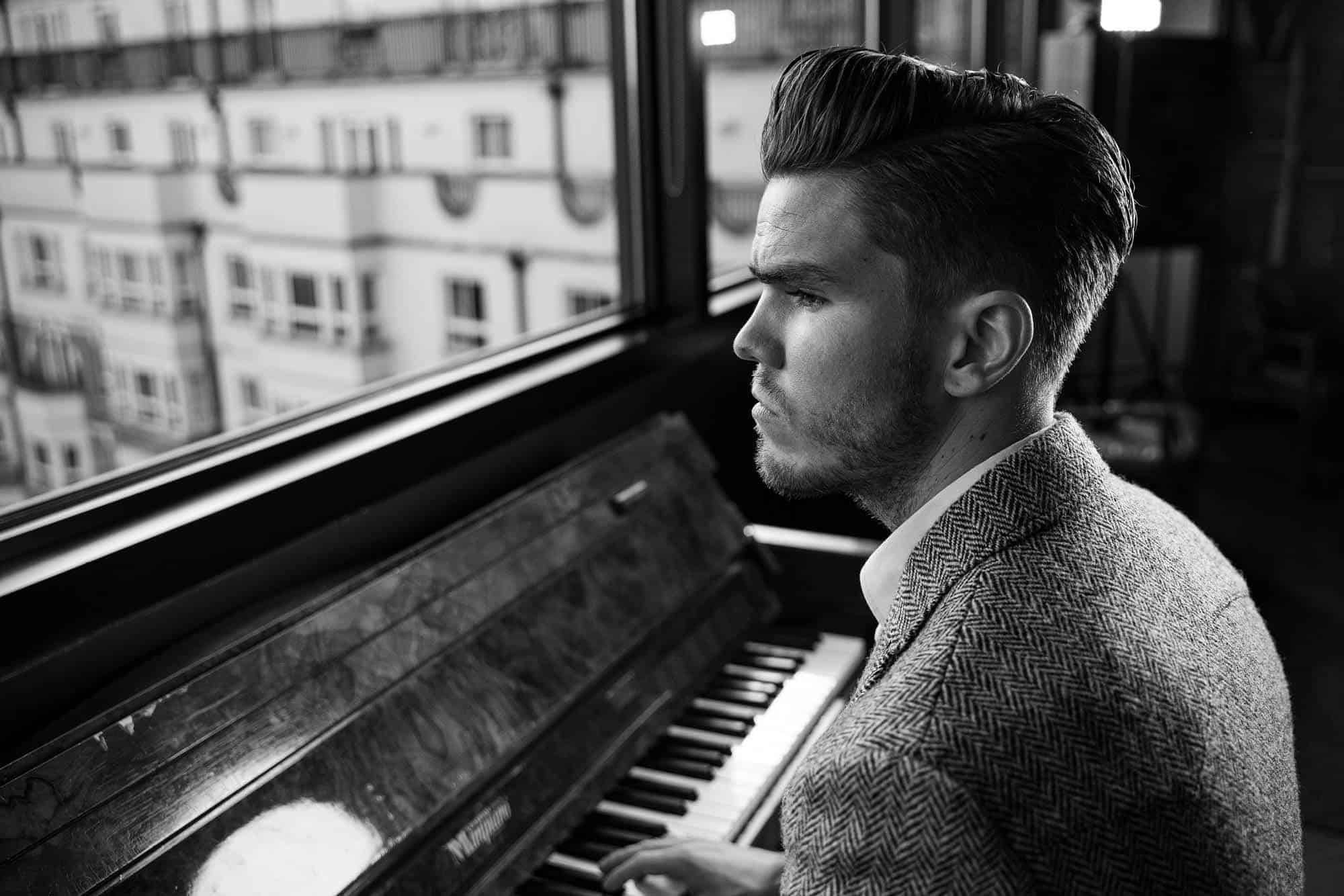 With so many influences and so much variation in music, I asked which genre he gravitated towards in live shows, particularly as he’s wracked up so many of them. “Great question. You never feel the same and you don’t want to do the same thing every day. Some days I’d love to just do an acoustic set and some days I really want to feed off the energy and give it some power.” JJ seemed to achieve some level of catharsis from the live performances and he unpacked the sentiments while his fingers still flitted across the black and white keys in patterns. “Sometimes you’re in the studio so much trying to chase the perfect performance of a song that it can start feeling a bit forced.  So, then live performances feel effortless and more enjoyable. It’s like movies and theater.”

If you want a visual representation of this presence of mind during live performances, you need only watch 89.3 The Current’s recording of KALEO playing “I Can’t Go on Without You” from the 2016 album A/B. This is the first place I send the uninitiated; it’s one of the greatest live performances I’ve ever watched. JJ is confident that the new album builds on that sound, incorporating the aforementioned flavors from studios around the world and different sounds. To the point, in fact, he believes the new music resembles concept tracks in many ways. I, like many fans of KALEO, am ready for it.