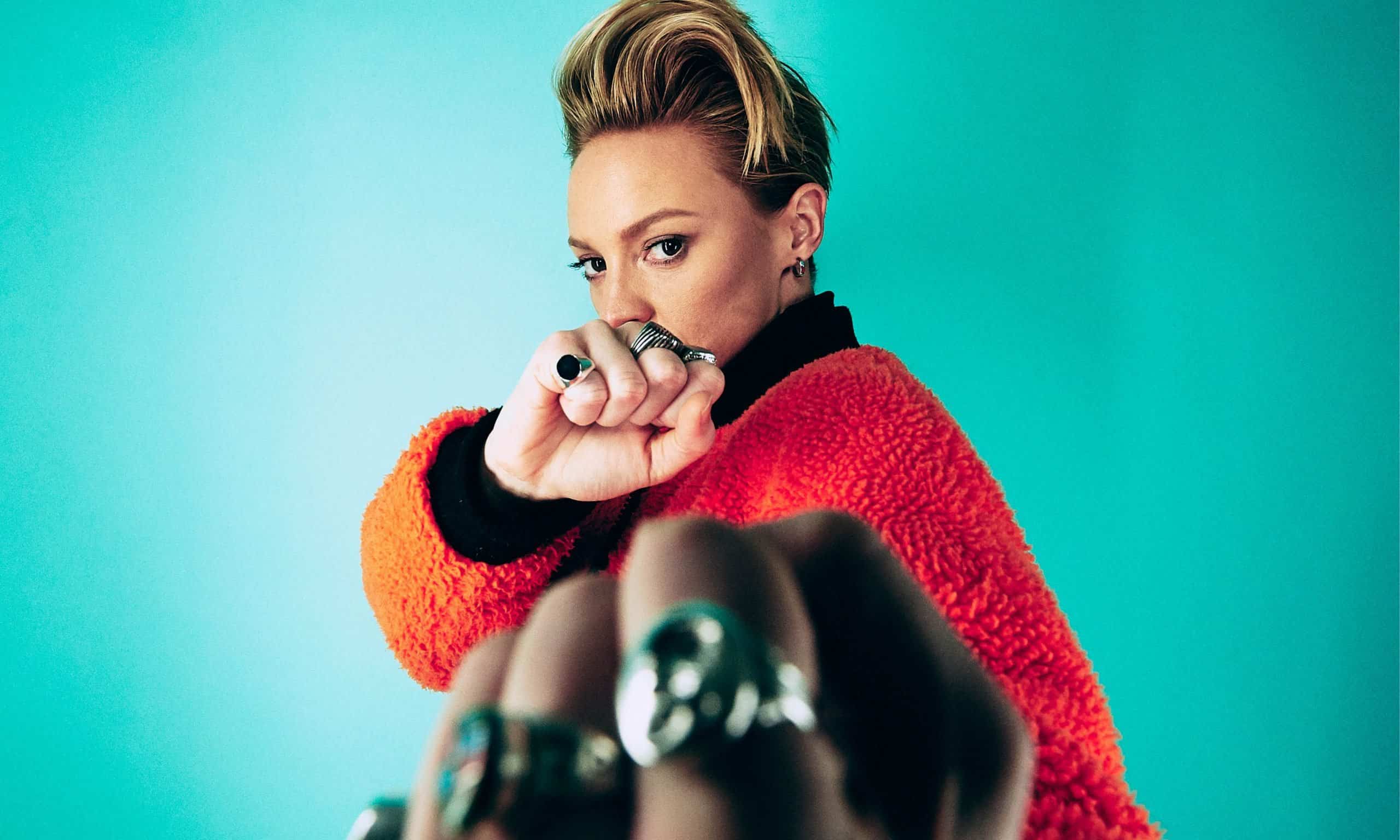 The start of February 2020 saw the release of La Roux’s anticipated and long-awaited third album Supervision. It has been 5 years since her last release with Trouble in Paradise, but it’s clear that Elly Jackson isn’t looking back. Dealing with themes of love, loss and personal progression, Supervision is pivotal La Roux. In its expansive groove-infused soundscapes, Supervision showcases a new repertoire of tracks that transpire to become instant hits alongside previous songs such as “Uptight Downtown” and “Bulletproof.” 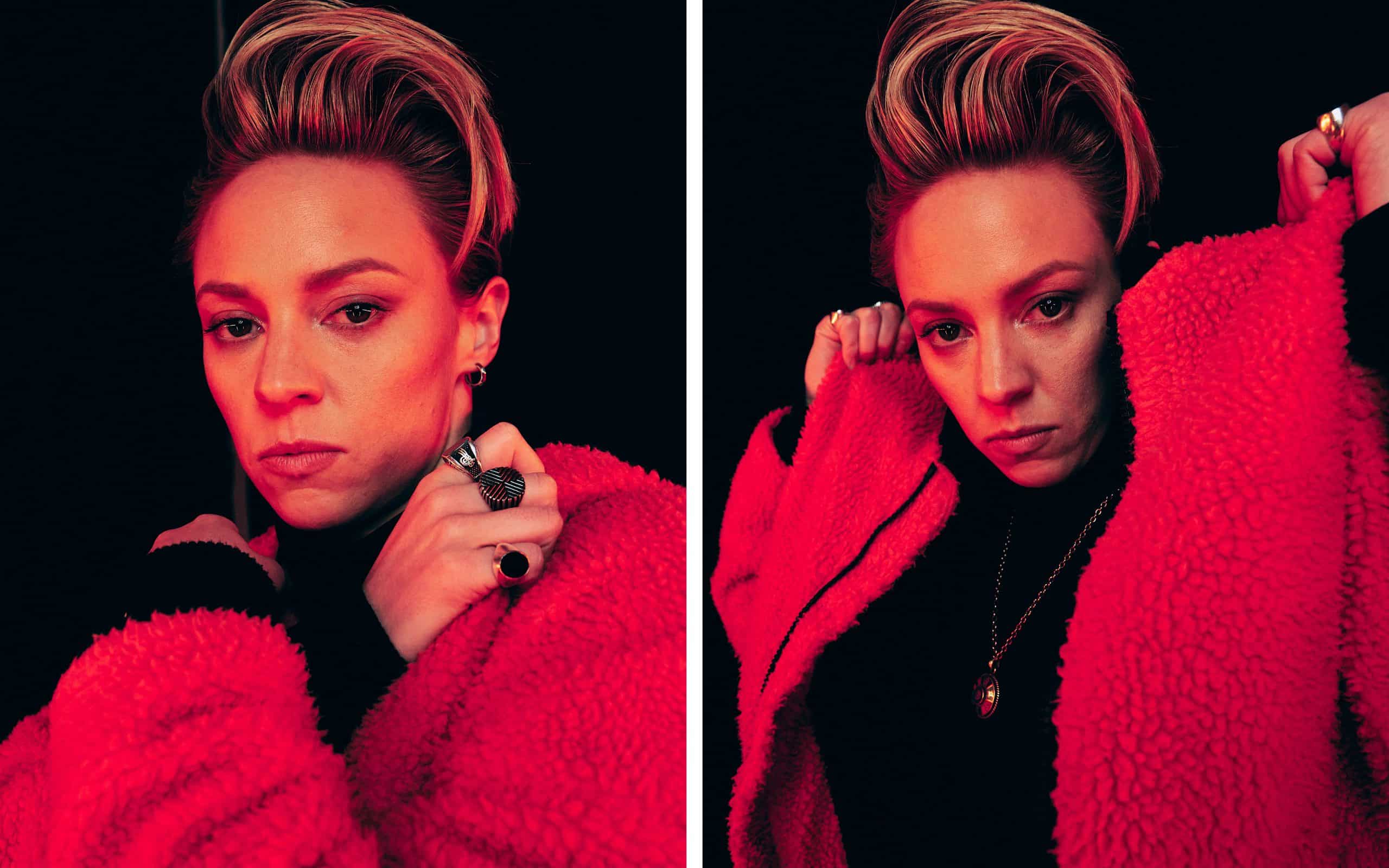 The 8-track personal odyssey was completed in just four months, but Elly reveals that she was in waiting for over a year before it became possible to bring it out into the world. Speaking from the confines of her South London home-cum-studio, she explains, “I really wanted the album to come out in 2018 so you can’t imagine how hard it has been to wait until 2020. I had finished writing it in 2018 and at one point I just bought a Playstation because I knew I had to wait for months. I’d finished the album so I knew we had to wait because we didn’t have a deal done yet, and stuff with the new label had to be set up and all this stuff that needs to be right, you know. Once I got to that point, there was no point in me then rushing things out, when I could actually just get everything right. At one point my manager was like, ‘you’re going to kill me but we’re going to have to wait longer’, and I just thought, ‘I can’t cope with this.’ I’ve already had to ditch an album and make another one. I’ve made it at breakneck speed; quicker than I have ever made anything, and I might as well have taken 2 years to make it. So I just bought a Playstation as I was inside for like 3 months. I was going fucking mental.”

At its core, Supervision acted as therapy for the artist. She says, “There was stuff sort of flooding out of me in a different way than it has for years. It was a necessary album, it wasn’t even that decisive; I just couldn’t stop myself from doing it. I had a few ideas in my phone that I was so gagging to get into the computer and just expand on. Then before I knew it there were 7 or 8 of them and then I was like, ‘oh, it’s done.’ I guess it really needed to happen.” 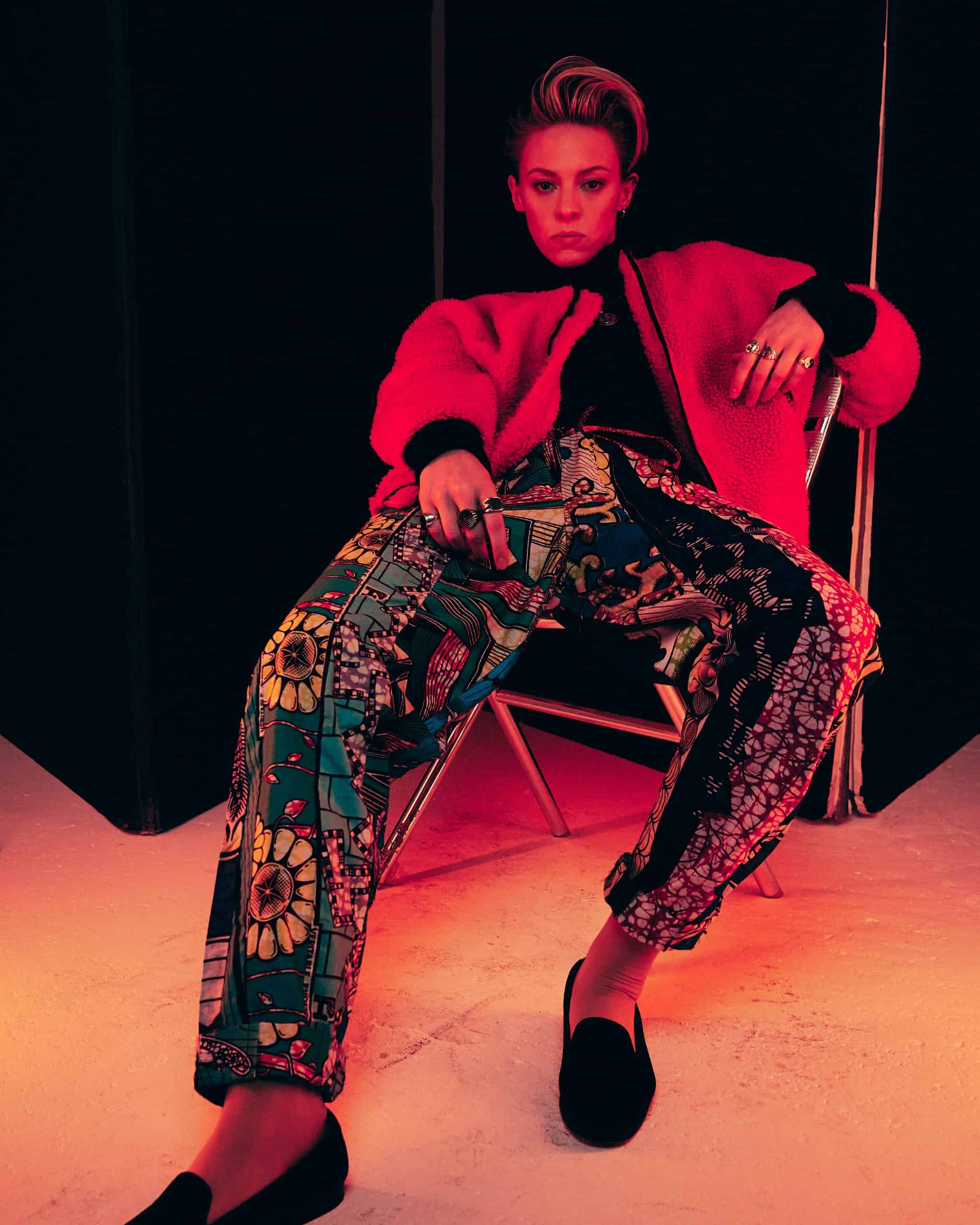 However the time away from the limelight added certain pressures, she tells me. “I’m very aware of the time that I’ve been away; I’d already been away for 3 years at that point, nearly 4 I think. I was so angry but also so happy that I was finally on my own with my music. But I was also really fucking angry as I felt I had a lot to prove.” She continues, “you know that now it’s got to be everything. Now it’s been that long then suddenly the pressure on the material that I release is more work. Everything is more. It’s difficult as if it had been 3 years it would have been very different. Also, you know you’ll kind of come back from a longer period away, which just puts pressure on how successful the album even can be. Regaining visibility in any industry is not easy.”

With lead album tracks “Automatic Driver” and “International Woman of Leisure [IWOL]” setting the tone of the record, it fell to Elly and Mat Maitland of Big Active to design a cohesive aesthetic. Elly tells me, “[It was] an extremely collaborative project. I brought him the color scheme and also the layout for the album cover. Don’t get me wrong, I’m not taking anything away from what he’s brought to the project because it’s not like he didn’t bring shit loads. He really has, and I absolutely love working with him. But even he would want me to make it clear that obviously the initial aesthetic; the initial conversations, reference points, ideas obviously came from the idea over making the record. To have him to contextualize those ideas and bring them into reality in a way that was beyond; it was beyond the way that I was seeing it. When he finally sent me the one using the photograph with the gradient in the background, there’s just no question in my mind that it was the right thing. Then everything he sent after that; once we got the first image right, everything we had to discuss after that, all I needed after that, would only take one very short conversation.” The end result was a “90’s skater-esque” look and feel, with purple and green pastel colors. “I certainly became obsessed with purple and green,” she says. “For no particular reason. I then got into the symbols and the playful side of 90’s graphics and stuff like that,” she continues. “I don’t think the album sounds particularly 90’s at all.” 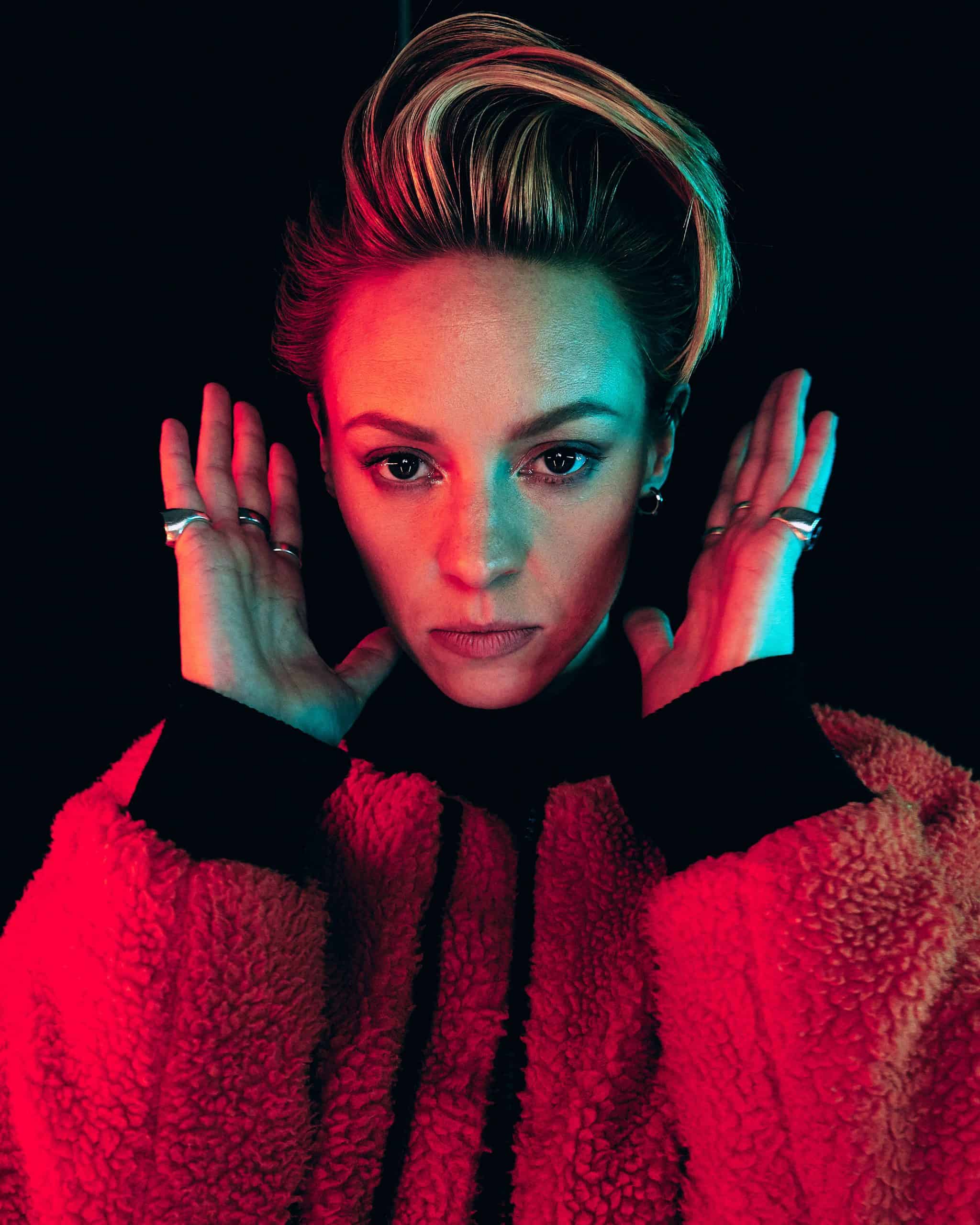 The album’s lead single “Automatic Driver” saw the artist on a golf course in a hyper-realist environment filled with neon-ridden golf buggies and a gamified interface reflective of 90’s arcade titles. Discussing the setting, Elly says, “I played it [golf] once or twice. We went and played at Palm Springs; I’m awful at it but it is good fun. I just thought it sounded really boring, walking for ages in between each point. But actually it’s the whole day of it that I really understand now. I do see the fun in it; I think golf can be pretty cool and a lot more younger people could get into it if it didn’t have that stuffy, elitist thing about it. It’s kind of a shame as it could be a quite wholesome sport. You walk for miles; you’re often in a very beautiful setting, you drive golf buggies and you get to wear what you want.” Elly is seen sporting purple and green outfits throughout the video, reminiscent of the album aesthetic. She continues, “The clothes could actually be quite cool. It’s not the coolest sport but I thought it would be a great theme for a music video.” In contrast, the music video for IWOL saw Elly focused on brightening up our reality as the viewer. “That was about La Roux broadcasting good vibes instead of all the fucking bollocks that’s going on at the moment,” she explains. “In a very light-hearted way, as there’s nothing serious or important about what I’m saying, I’m not trying to be clever or political. The other songs are a lot more serious but visually I just wanted people’s eyes to be engaged, excited and happy. That’s kind of my main thing, and for it to work with the music. Broadcasting my feelings; my ideas, my color schemes and everything that goes on in my head.”

La Roux’s initial run of shows showcasing the new record saw her play London’s legendary club Fabric for 2 nights, and intimate venues in Amsterdam, France, and Germany. Speaking about how the crowd received the new material, Elly explains, “People knew the tunes very quickly. International Woman of Leisure goes down pretty much as well as Bulletproof and In for the Kill, which is great. I feel like I’ve been playing them for ages already even though it’s only been 5 gigs. It’s great and really comfortable; none of that weird and awkward, ‘oh you’re playing your new material’ bollocks.” Elly goes on to talk about bringing ‘Supervision’ to the States in the fall, “I can’t wait. We had to move it for really boring visa reasons, but in the end, it’s actually better as it means we can tour for longer at the end of the year. We’re doing all of our headlines touring in like 3 months at the end of the year which will actually make a lot more sense. I’m really looking forward to festivals as well.” Kicking off on November 4th in Seattle, La Roux’s live show visits the likes of LA, Minneapolis, Washington, and New York before finishing up in Toronto, Canada on November 25th. Elly also mentions that she’s waiting to catch up with some friendly faces. “When I went to New York the other week, that was the first time I’d been in the States for many years. It was a really weird feeling, but it will be really nice to go back. It will be nice to see my tour bus driver as well. She’s like my sister, my aunt and my friend at the same time. She’s fucking amazing; she’s called Sharon and I’m really looking forward to spending some time with her again. It’s been too long.” 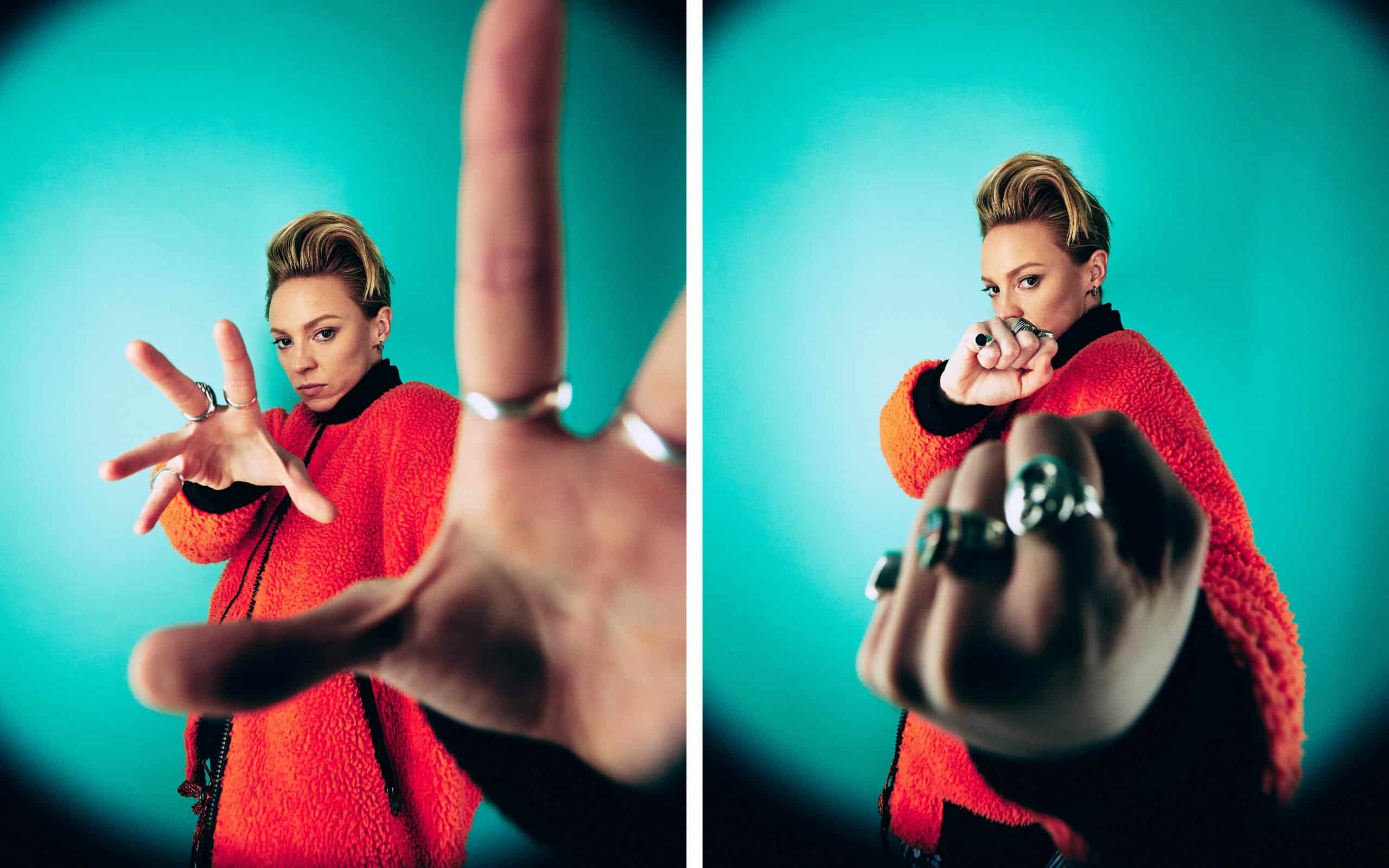