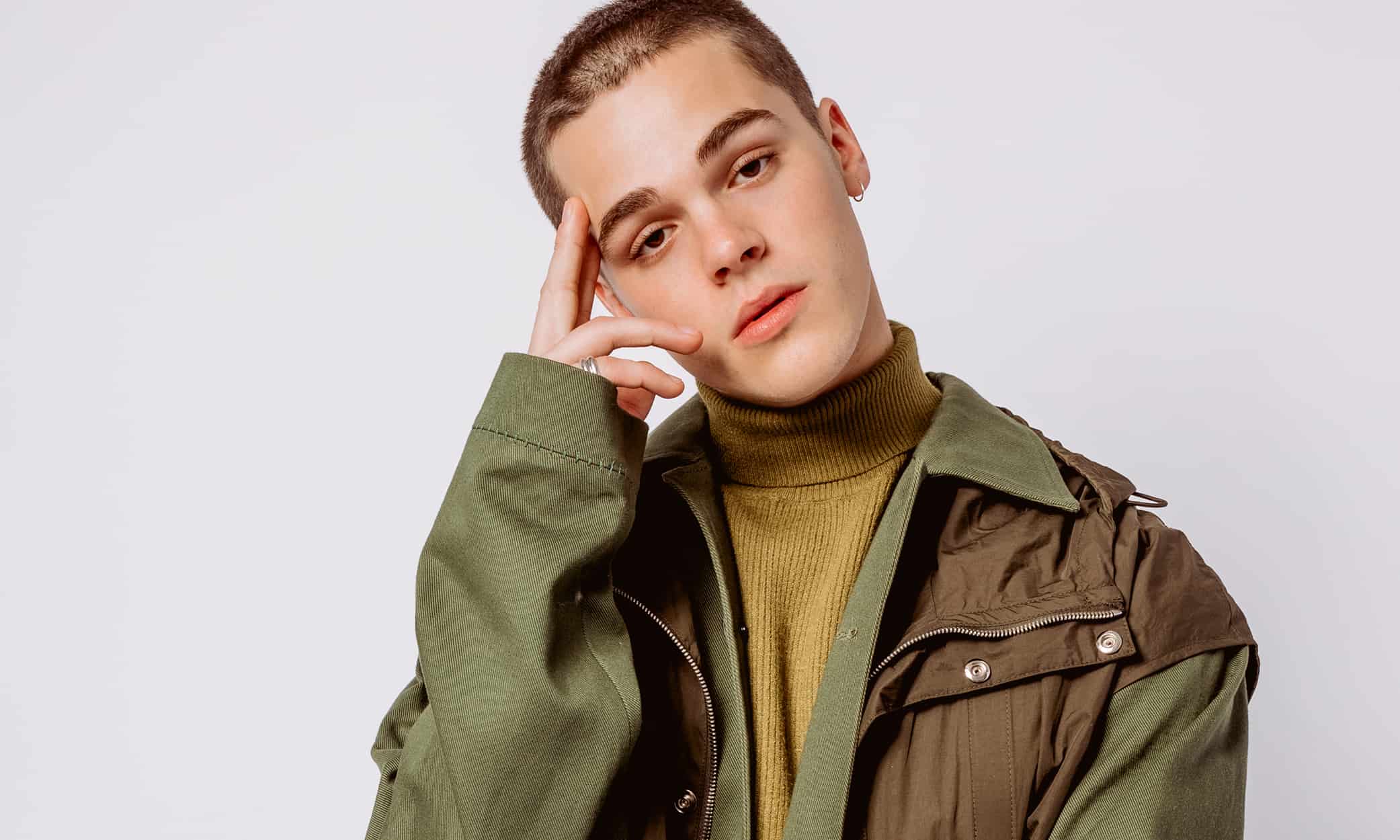 There aren’t many singers who can say they were named both a VEVO Lift Artist and an MTV Push Artist in 2019, had three singles hit the radio Top 40, and currently have a duet with none other than powerhouse Meghan Trainor. One that can claim all these feats and more – he’s surpassed 8 million monthly listeners on Spotify and set him to be one of the top 500 artists on the platform – is AJ Mitchell.

We spoke to the 18-year old just a week prior to the release of his brand new single “Spring Break,” discussing his past, present, and future in the world of music. Because where some may think being 18 means he’s inexperienced in the music industry, that’s far from the truth. Rather, it means that the part of his life where he wasn’t involved in music is infinitesimally small. “Very early on, when I was only like 5 or 6, my dad would write songs and we started competing on who could write the better song.”

It’s how he almost accidentally rolled into a career in music. “Once I began writing more [songs] later on, I’d record them just for fun. Eventually, I ended up posting them online. No one besides my parents even knew I made music,” he grins. Having over 100 million streams on a multitude of songs is quite a change from having just your parents listen to your material. Mitchell is very much aware of this, and tells me that “almost every day I feel like I need to pinch myself, just to make sure this is real.” 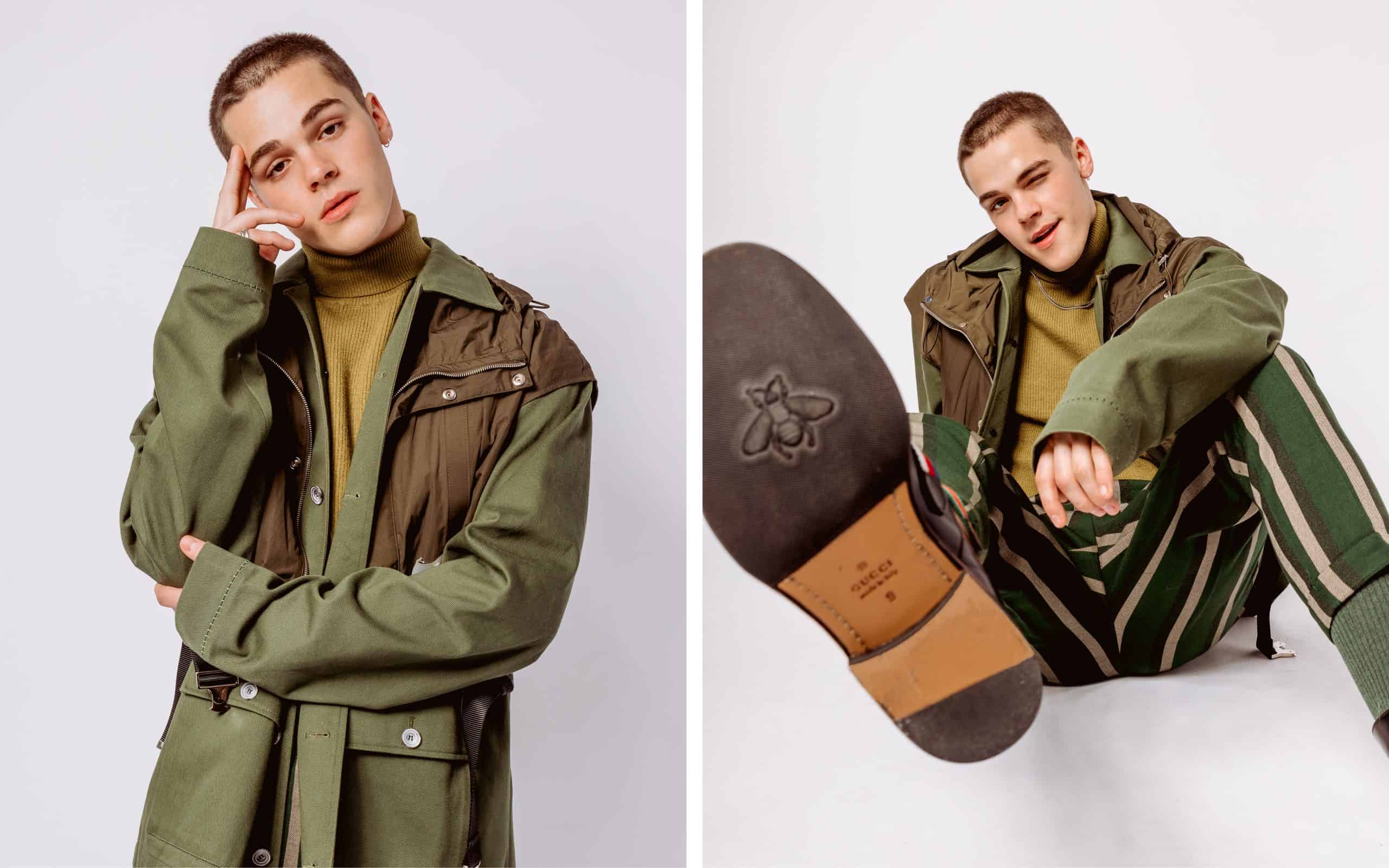 And rather than letting the response from fans get to his head, going on tour has only humbled him further. It’s one of the ways in which Mitchell has gotten to see that his music truly has touched a massive number of people. “One of the first big moments that it hit me was once I started traveling a lot and seeing fans sing along to my songs in places I’ve never been before. I got back from touring in Asia for the first time recently and I was shocked by how much they already knew my music. Everywhere I went everyone was so sweet. I’m already eager to get back on tour and start performing new music.”

It’s clear that Mitchell is aware of the privileged position he’s in, having ended up signing a record deal with Epic Records and relocating to LA. It’s allowed him more opportunities to grow, successfully leading to the aforementioned tour and song releases. Still, he tells me that he misses “all his friends” from his hometown – a somewhat sobering confession from a blossoming superstar. Nevertheless, AJ emphasizes that being in LA has definitely had a positive impact on his songwriting – and has come a long way from writing competitively with his dad. “I’ve been fortunate enough to get in the room with so many different, amazing writers. I’ve been able to learn a lot from them at a young age. Now I’ve never been more confident with my songwriting.” 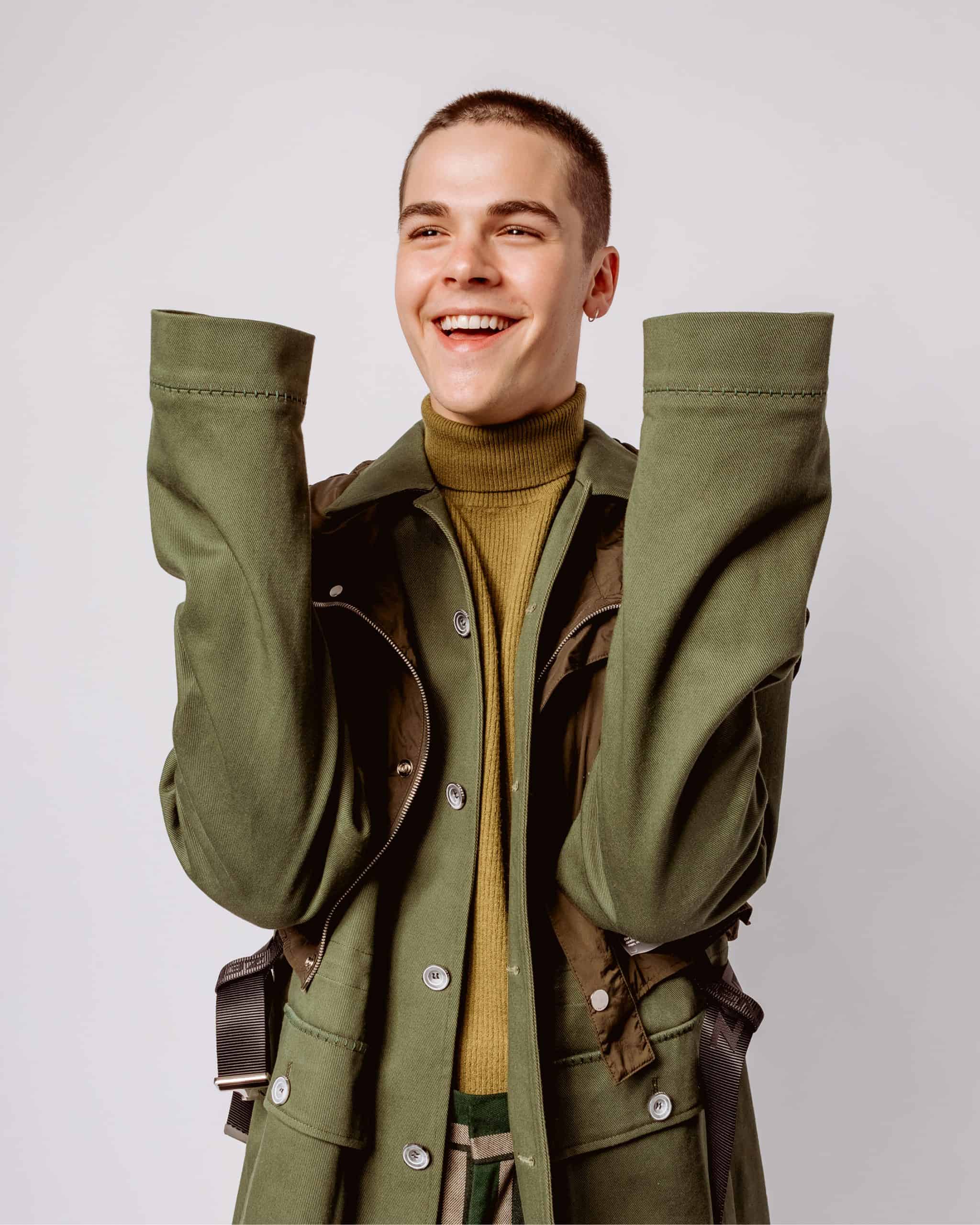 It comes as no surprise then, that when I ask AJ which song he’s most proud of, he immediately names the track that he wrote himself: “’Used to Be’ – that’s what started it all. I had no idea it would take off the way it did, especially since it’s a song I wrote at such a young age,” he adds.

And while the environment in which he writes may have changed, and his skill has improved – his process and source of inspiration haven’t. “Some days I have a piano melody or a certain line stuck in my head and I’ll build around that. But most days, I like to start at the piano and build a song from there. I get inspired by everything. I get inspired by what my friends go through, life lessons I learn, and what I’m feeling at any given time. A lot of my music is based on relationships I’ve been through or what people close to me have gone through.”

Sonically, his track record shows that AJ favors R&B leaning pop. He names Bruno Mars, The Beatles, Coldplay, and Lil Wayne as his early inspirations. “Lately, I love artists like Harry Styles, Lewis Capaldi, and Lizzo.” It’s a bit of an eclectic mix and is a testament to the fact that Mitchell doesn’t want to be defined by a particular style of music either.

An understandable, yet slightly controversial take when you’re 18 and about to release your debut album. It’s a bit of a conundrum, being forced to define your musical identity when at 18 you’re still figuring out who you are in the first place.

Perhaps that’s why AJ stresses the album will have “something for everyone on this project.” It’s a bit risky – defying the laws of debut albums, but Mitchell’s adamant. “I never want to be defined by one genre and I love challenging myself to try something new. A lot of the songs are vibey, R&B heavy songs since I’ve always been so inspired by people like Justin Timberlake. There’s also a bunch of feel-good, more pop-leaning songs that I had so much fun making too.” 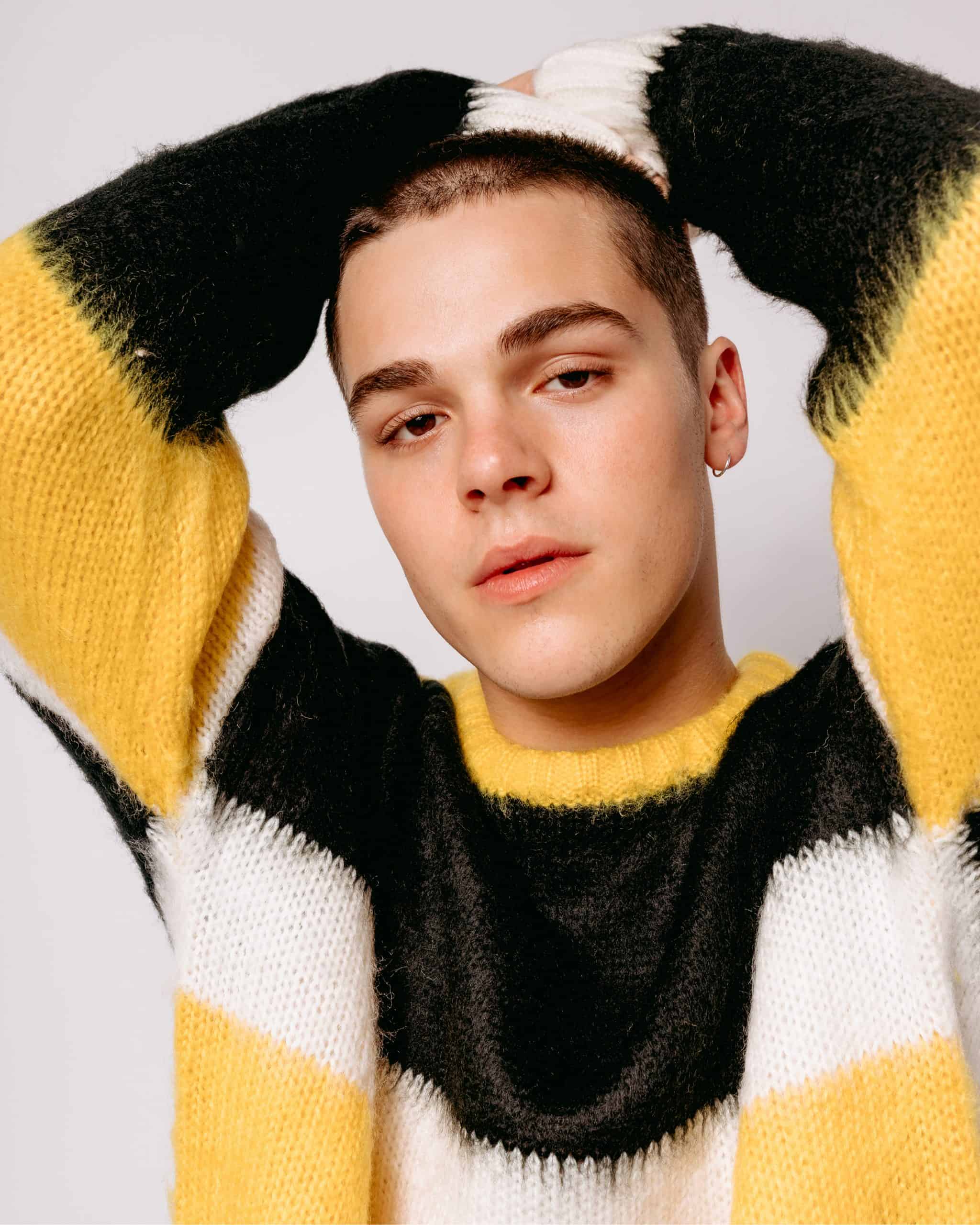 He’s got a good foundation to build off of, though. His collaborations allow him to broaden his horizons, letting him get away with dipping his toe into another artist’s world. There’s his collaboration on label mate Meghan Trainor’s latest album. “I’ve always loved Meghan’s music, so when she asked me to be a part of it, it was a no brainer. She’s one of my favorite people,” Mitchell gushes. But there’s also the song “Slow Dance” featuring Ava Max. Rather than being asked, Mitchell was doing the asking for this track. “It just seemed right to have a duet, and I’ve always loved how Ava has such a powerful voice. I reached out to her to see if she wanted to be apart of it and she sent back a vocal in literally a few hours. Right away I knew she was the one for the song.”

When AJ Mitchell was recording his new single “Spring Break,” he had the exact same feeling – having recognized the song as a potential hit. “[The track] kind of came up out of nowhere, but the moment I cut it my whole team and I knew it was the next single. I’ve been wanting to make a fun, hip-hop influenced track for a while. It feels like the stars kind of aligned for this one.”

Of course, having Rich the Kid feature on the track provides some additional legitimacy to the song – not just sonically, but also lyrically. “Spring Break” referencing both drinking and drug use does not seem entirely in line with the fact AJ is only 18. Nevertheless, it’s definitely an upbeat track that is guaranteed to feature on your pool party playlist. For AJ, it was yet another opportunity to explore a different type of track. “I think for me, this was just a fun song that I tried to not take too seriously. It was nice to make a more carefree, upbeat song than most people are used to me making.”

The track is meant to lead the way to a full album this year, called Skyview. It’s an evocative name, and it turns out to be one full of meaning for Mitchell. A name chosen with care, but also one that signifies a certain dichotomy. On the one hand, it’s an homage to his roots. On the other hand, it also serves as a reminder of what he’s left behind. “Skyview is a drive-in movie theatre in my hometown in Belleville, Illinois, and whenever I think about my hometown I think of Skyview. My parents went there growing up and even my grandparents. So to me, Skyview has always reminded me of home but also was a reminder that there’s more out there. There wasn’t much to do in such a small town so a lot of my friends started getting into drugs and gangs, but I would go to Skyview and have an escape. That’s what I hope this album can do too.” 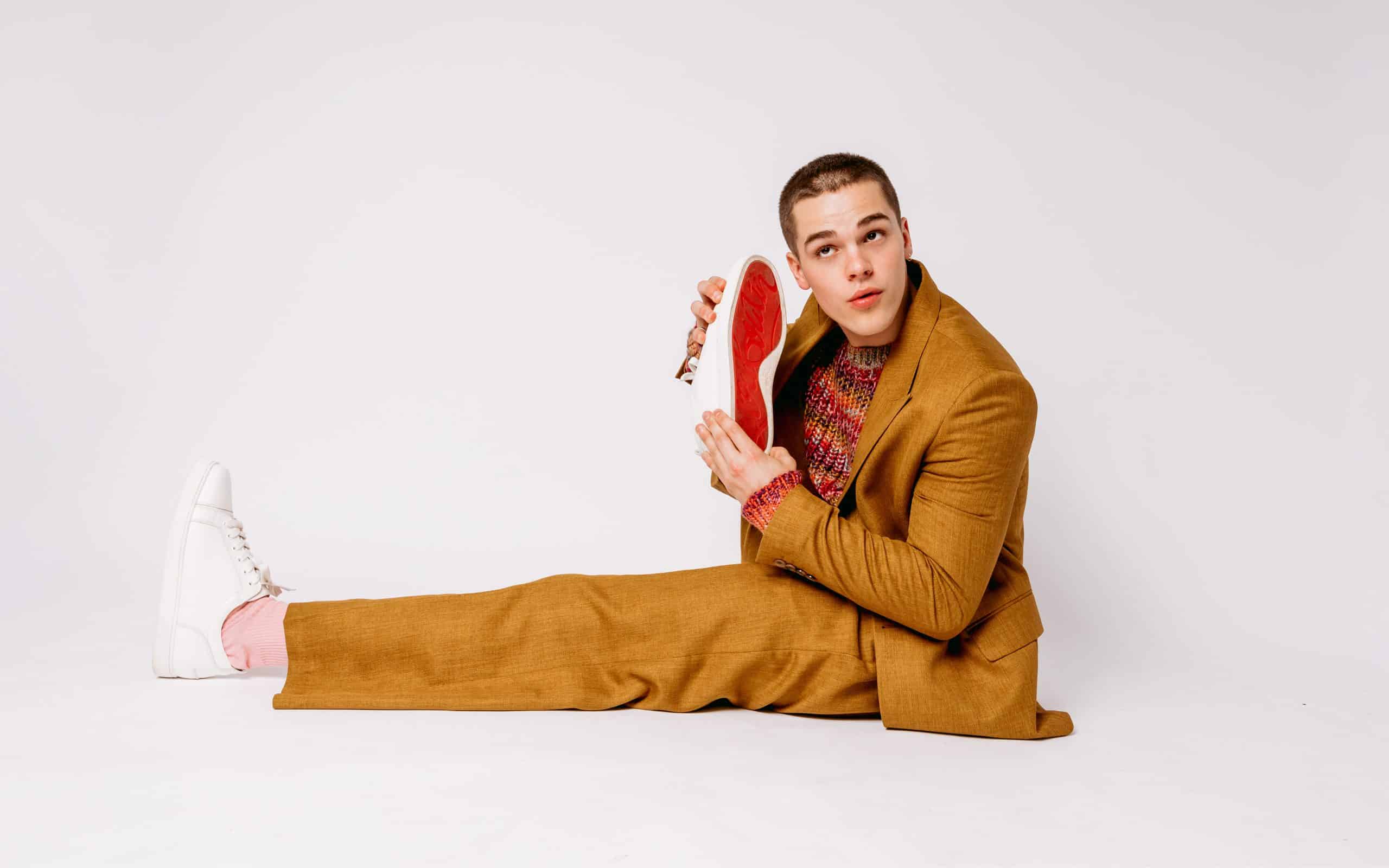 When I ask him if there are any other milestones or goalposts that he’d like to achieve within the next two years, the humility he’s displayed throughout the interview pops up again. “Oh man, everything has been such a blessing so far.” But everyone has dreams about the future and having ticked off some huge milestones in his career already, clearly, there are new things he’s striving for. And so he confesses in the end. “It’s always been a dream of mine to get a #1 album and to go on a world tour. Hopefully, I’ll get there soon!”

Judging by the reception of his releases so far, I’d say he’s halfway there already. Listen to “Spring Break” here: